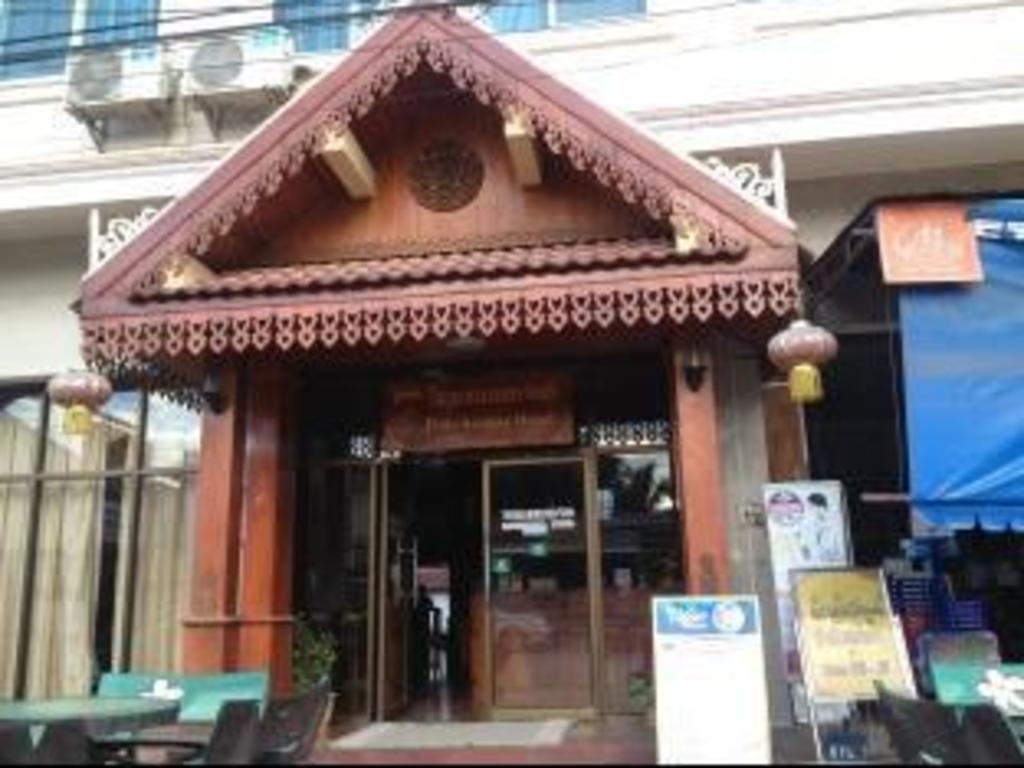 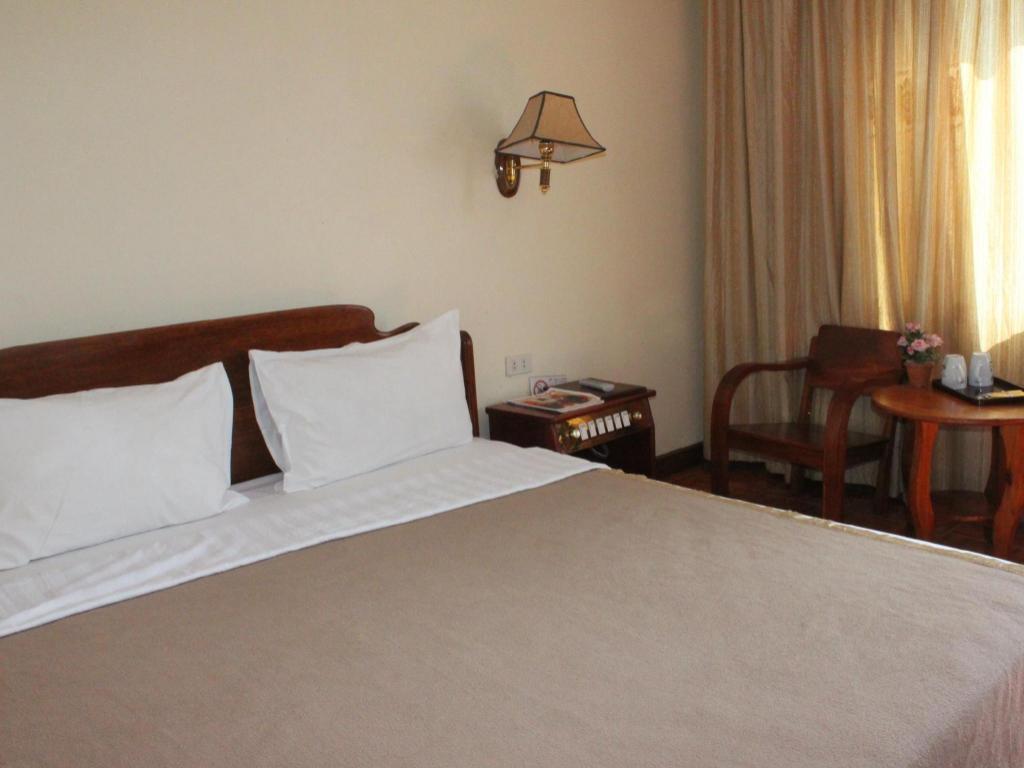 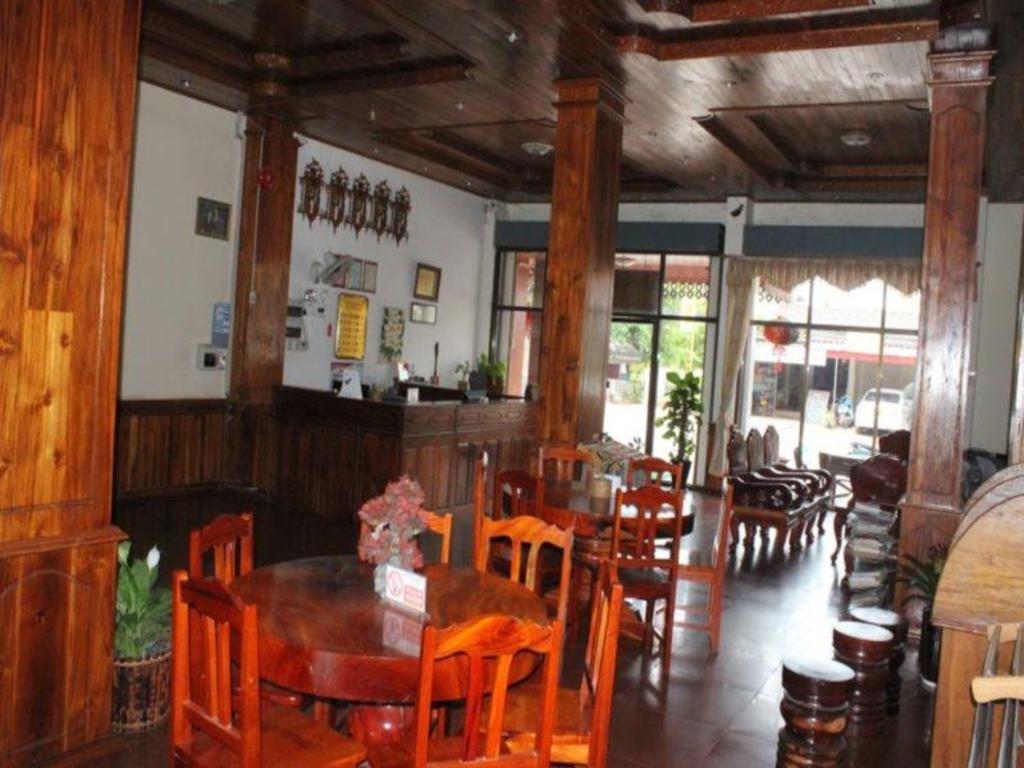 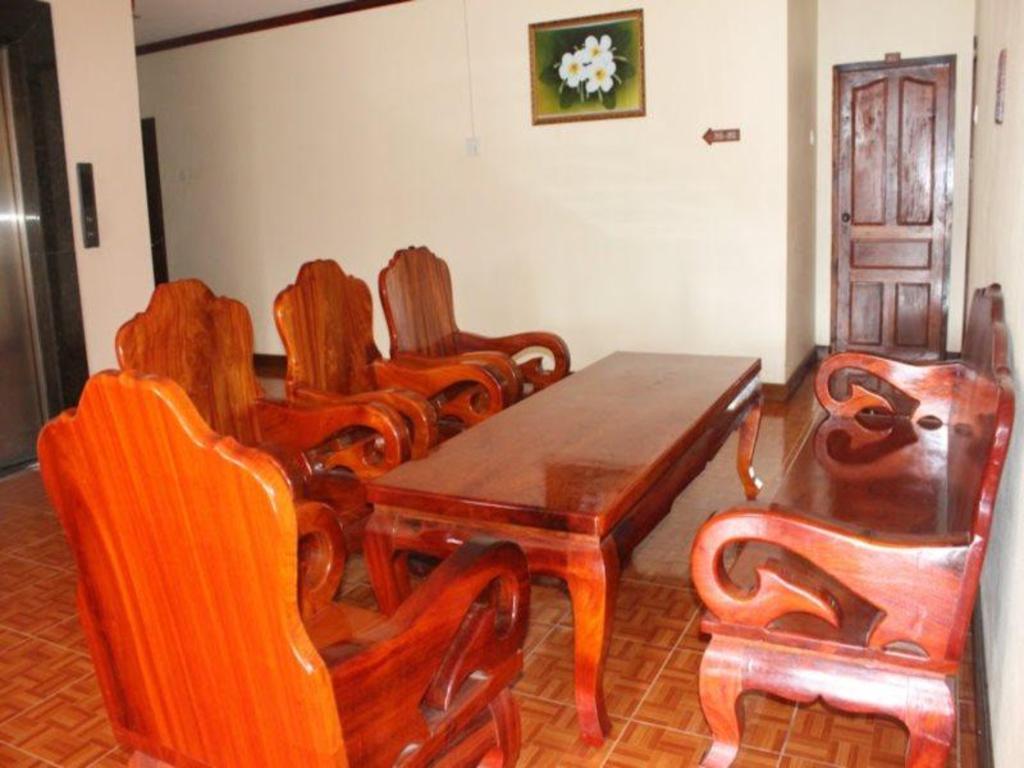 What time is check-in and check-out at Dokchampa Hotel?

Check-in is from 02:00 PM, and check-out is until 12:00 PM. You may request early check-in or late check-out during booking, subject to availability. Guests checking in or out before or after the designated periods may be charged an additional fee. The hotel offers luggage storage to guests for before check-in and after check-out. The front desk is always open, day or night.

How do I get to Dokchampa Hotel?

Dokchampa Hotel is easy to access from the airport. In fact, you can even book your airport transfer in advance for greater peace of mind. Just use the "Let us know what you need" section of the booking page to let the hotel know you want to book a ride, and they will contact you via the Agoda messaging service. A stay at Dokchampa Hotel also comes with easy access to the neighborhoods around the hotel through the convenient shuttle service offered at the hotel. For those who wish to drive their own cars, Dokchampa Hotel has a car park that's close to the hotel. Parking is free for guests. If you're looking for an easy way to get around Luang Namtha with private transportation, the hotel can arrange car rental for you.

Dokchampa Hotel does permit smoking in some areas and is not 100% smoke-free.

For travelers who want to take in the sights and sounds of Luang Namtha, Dokchampa Hotel is the perfect choice. From here, guests can enjoy easy access to all that the lively city has to offer. This modern hotel is in the vicinity of popular city attractions such as Nam Dee Waterfall.

At Dokchampa Hotel, every effort is made to make guests feel comfortable. To do so, the hotel provides the best in services and amenities. A selection of top-class facilities such as 24-hour front desk, car park, car hire, newspapers, ATM/cash machine on site can be enjoyed at the hotel.

Experience high quality room facilities during your stay here. Some rooms include internet access – wireless (complimentary), non smoking rooms, air conditioning, desk, mini bar, provided to help guests recharge after a long day. Besides, the hotel's host of recreational offerings ensures you have plenty to do during your stay. Dokchampa Hotel is a smart choice for travelers to Luang Namtha, offering a relaxed and hassle-free stay every time.

Our stay at the Dokchampa was very good insofar as the hotel was in the centre of town, and clean and comfortable with good internet. The motel did not serve food but right next door is the Gourmet Cafe run by Andre and Karen Brummer. Our dinner and breakfast were excellent, and Andre also offers sports activites such as hiking and kayaking.

Comfortable stay right in the middle of town”

We had a comfortable stay. WIFI was strong and reliable. It is right smack in the middle of Luang Namtha city centre. Easy access to the tour agencies and the local markets.

A good hotel with helpful staff. Located in the city centre close to restaurants. Comfortable rooms. Had some issues with the electricity cutting out but I dont think it was just the hotel. They have a large secure parking area out the back which is great if you are travelling by car or motor cycle. The staff spoke english well and were very helpful. I would stay there again.

Basic but comfortable and cheap ”

This is the main hotel in Luang Namtha, right in the middle of town on the main road. It is very cheap and quite comfortable. Room is nothing spectacular and the bathroom basic but it is clean, water was hot and air con cold. Wifi worked but no English TV, with the hotel mainly seeing visitors from China. Recommended for the price with great cafe next door.

Comfortable stay in the heart of the town ”

We had a large double room with huge windows so felt very airy. Good facilities - hot water and coffee/tea in room, soaps and toothbrushes in bathroom, large bed with side lights and TV. Room was cleaned everyday, the level of cleaniless at this hotel was really good. This is a big hotel and seems to attract large groups who can be incredibly noisy, don't be afraid to tell them to turn the volume down. Location is excellent, right in the heart of the town. Very good value for money - we recommend.

We only passed by Luang Namtha; only stayed one night. There is not much in this area of Laos, you normally go there when you want to do some treks. The hotel is on the main street and close to booking offices. The room is large and comfortable for a budget hotel. Wifi is extremely slow. Staff was friendly and helped us find a shop where we could buy a new battery charger for my phone.

Did you find this review helpful?|
5.7
Eric from United States
Couple
Standard Double Bed
Stayed 2 nights in May 2015

Location was great, easy to check in and out, staff made it easy to change rooms

Dokchampa hotel was not bad for the money, but I say that only because of how cheap it is. It is conveniently located for tourist information and trekking companies, and most private buses from other places seem to drop off there. Check in was fast. The room did not look too dirty, however there were five major issues with our first room. First, there was a hole in the ceiling. Second, the air conditioner was leaking water through the hole, on to the desk in the room. Third, the shower mount on the bathroom wall was broken. Fourth, one of the vents made huge noises when it was turned on. Fifth, the comforters for the bed were stuffed in a closet and had a mildew smell. After one night in this room, we asked to change rooms, citing the various issues, and we moved into a different room, which was better, however the comforters were still in a closet, and a vent was noisy. The cleaning staff doesn't seem to do a very good job either, as some trash that had found its way on the floor was still there when we returned to the room. On the whole, the place isn't terrible for the money, but be wary some of the rooms have issues.

Nothing to complain. Big chinese hotel ideal for groups where multiple rooms are needed. Good price/value ratio, excellent location. If you seek true laotian vibe, you must look for anything else.

I had a really nice stay at this pleasant hotel. The staff, including the cleaners, were attentive and very helpful. I should add that the tv was locked on one channel, and there was no refrigerator; however, these were minor points as I do not care about watching tv, and my food did not spoil as I used the fan, not air conditioning, to cool the room. The shower was hot, and welcome after venturing out into the wet and cool conditions.

The hotel is in the centre of town close to the trekking offices. Staff are pretty friendly and helpful. The room is a good size and has a good shower with lots of hot water. They don't serve breakfast but a few good places are very nearby and open early. They have free WiFi but there's no reception in the room. Nothing too fancy but very good for the price.

great place in center of town”

i booked here for the wrong night so missed my reservation but stayed here later anyway. i i had the VIP room with double bed there was an english speaking fellow available at reception to help room very clean and comfortable and on the 4th floor with view of city. loved this place. you made me rate the food and dining - there isn't any

very nice hotel above our expectations”

We only stayed here for one night on our way to Thailand, but this hotel has very nice big rooms, clean and comfortable. Especially for this price. Staff english is poor, but that s a common in laos

All staff are friendly and helpful and we would like to thank for the time spent for us and hospitality. We had access to free wi-fi all time. It is perfect location, quiet and clean. The one day kayaking tour and one day tracking tour were very good. The Indian reustarante Aisha is very good the English speaking owner. We found the VIP room has this same technical problems as regular room but is twice cheaper. We also found a lot of guesthous with good rooms, free breakfast and better price near our hotel.

Did you find this review helpful?|
10.0
Exceptional
Frank from United Kingdom
Couple
Standard Double Bed
Stayed 1 night in May 2018

In the middle of town so easy to arrange anything you want: motor cycle, trekking, night market with local food. Hotel has basic facilities but all clean. Maybe dated decor, but all is ok for the stop over.

the hotel is in the centre of town and close to the trekking offices and the very few restaurants. also very close to the night market and easy walking distance to the main market. staff are friendly and most were helpful. no restaurant or breakfast. the room was clean, a fair size and enough hot water. free wifi in the lobby but no reception in the rooms. very reasonable price.

Good quality for a really low price. Althouhg the room was not perfectly clean, but adequate and quite noisy in the morning it was still a good choice for the cheap price.

Good Location but cheaper if you just walk in”

在市中心 但性价比较低 从agoda上面订房贵很多 还不如直接住进去便宜 The hotel is in a good location, close to night market, outdoor trip stores and retreat bar. However, it's too much expensive booking through Agoda. There are lots of guest house there. There was no necessary to book in advance. With the same price, you can stay in much more beautiful and Eco guesthouse than this one.The shower is not hot enough, but rooms are quiet. Service person is warm.If you need air-condition, it might be a plus.

Did you find this review helpful?|
7.3
Very good
Thee from Thailand
Couple
Standard Double Bed
Stayed 1 night in May 2014

great view of the mountain from the 4th floor... bathroom & bed are CLEAN... I recommend to stay here (worth the money/reasonable price/clean)... next to the best restaurant in town (the forest retreat) BUT DON't DRINK the complimentary water... it tastes weird... and lastly, the maid came in to clean my room at 10am while I didnt tell them to check out, rude!

Stay was fine, thank god for 24/7 reception, because we arrived in the middle of the night and everything was closed. The room was big and clean, but the hotel didn't have a lot of atmopshere. Wifi was very very slow.

Did you find this review helpful?|
12345
This is a popular property. Don't miss out! 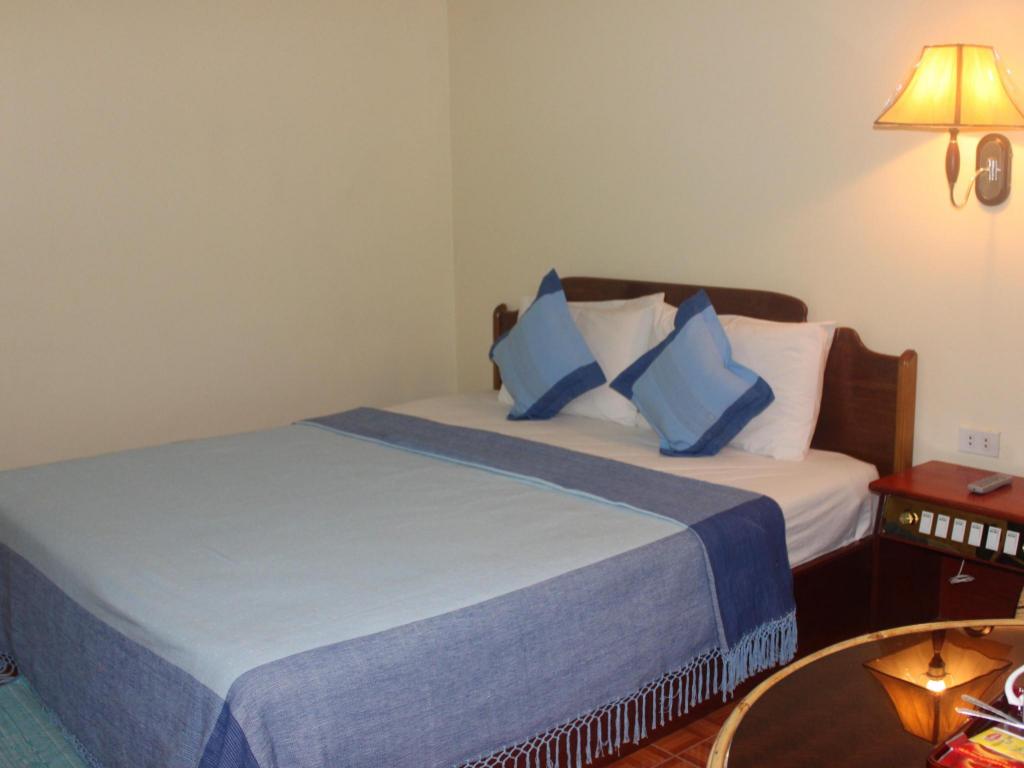