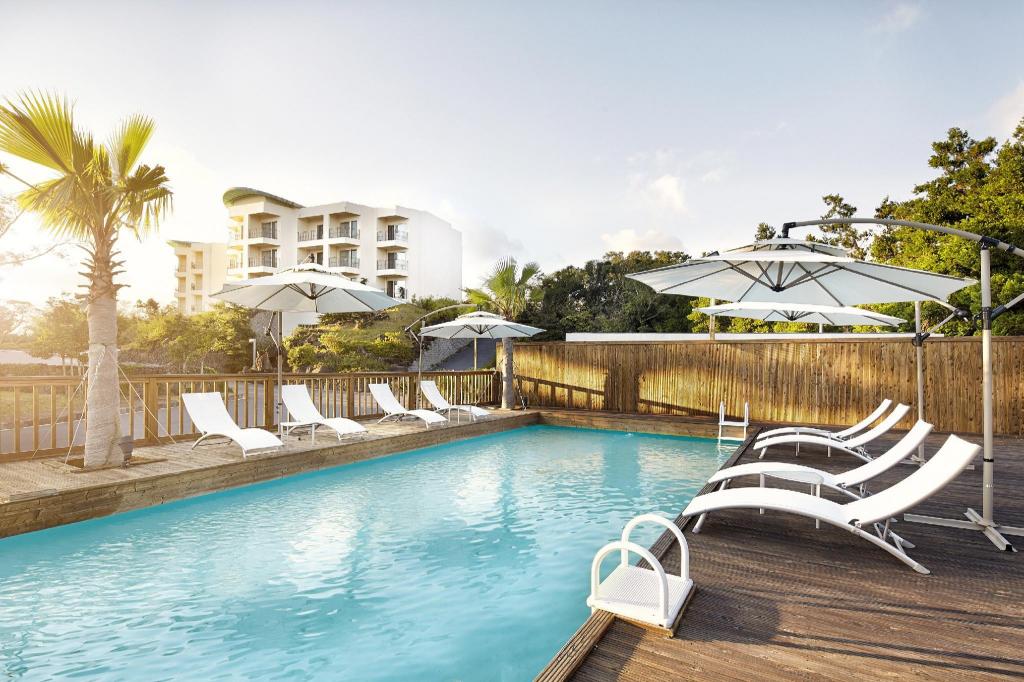 "I am very satisfied and had a nice time with my mom." 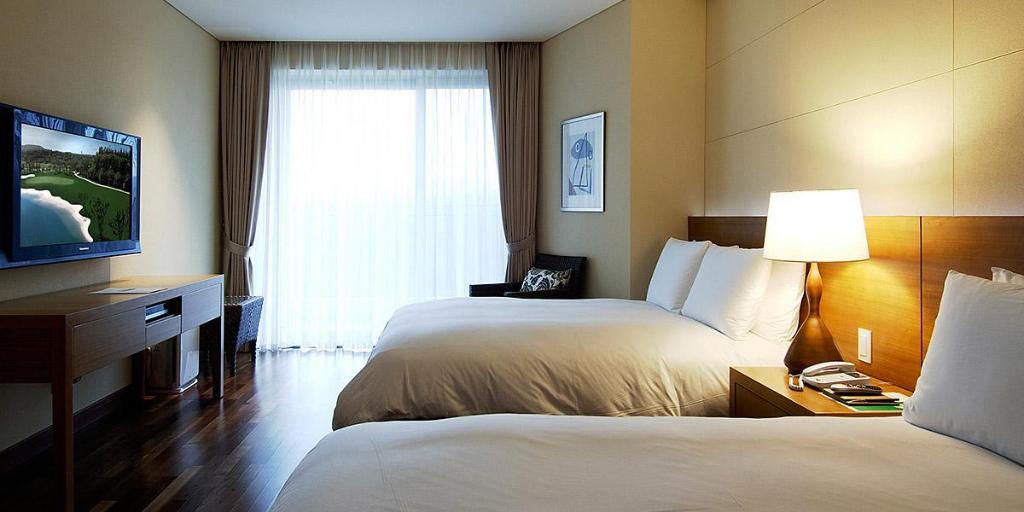 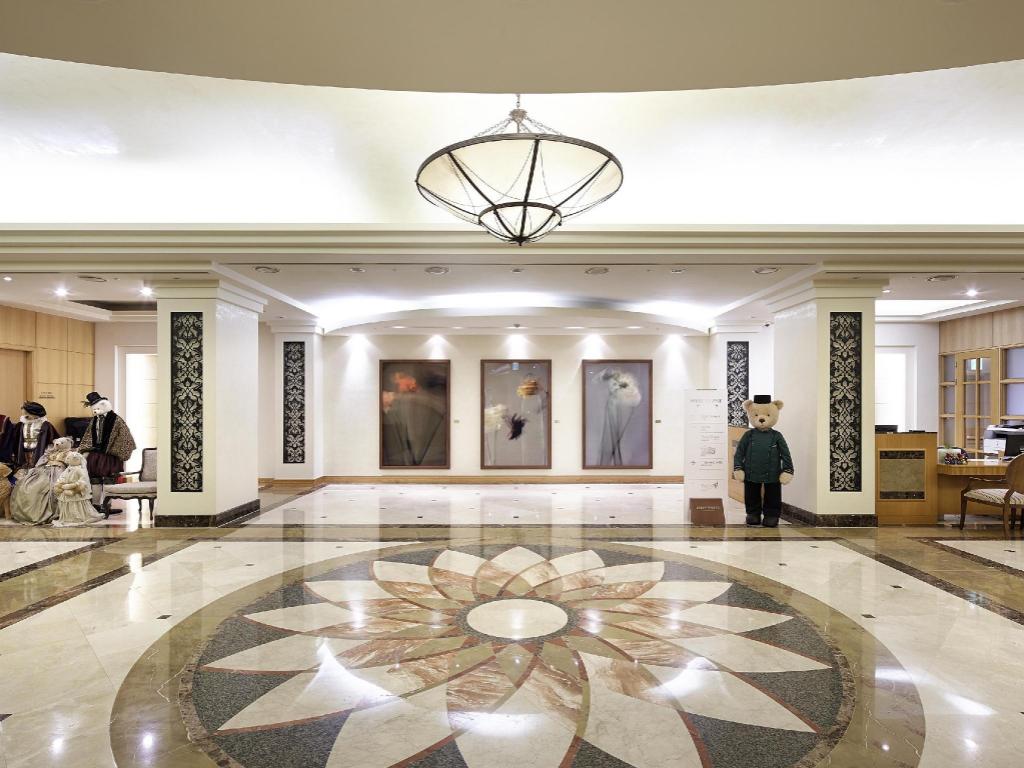 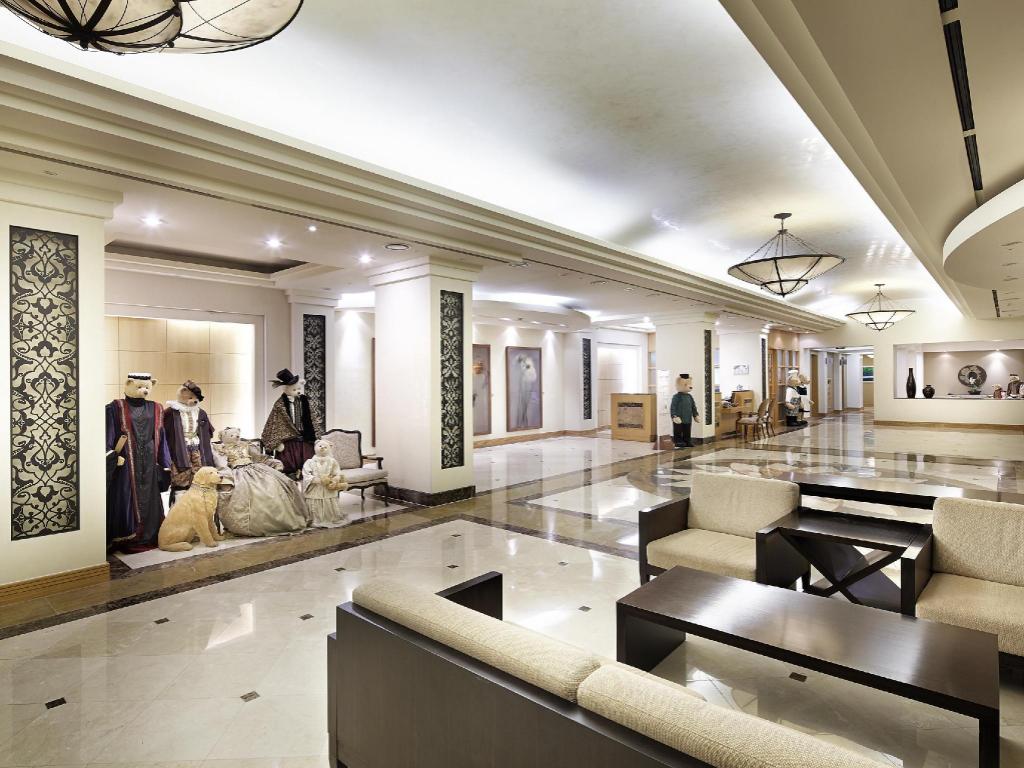 Inside city center
ParkingFREE
Hygiene Plus
Wellness
This property has self-selected and self-certified the following hygiene measures.Learn more

Health and Medical
First aid kit
Everything you need for a rejuvenating retreat for both body and spirit.

All staffs are so kind and there has small convenience store at lobby Spacious & comfortable room.

Very comfortable place to stay and if you golf, this is definitely an ideal resort.

Teddy everywhere^^ my daughter was so happy and enjoyed with the stay.

The interior is very nice with various outfit of big bears.

Pros - The room was very spacious with 2 huge double bed.

The buildings were low so that was very unique to me.

Your dates are popular among travelersPopular destination! Properties in Jeju Island are being booked every minute! 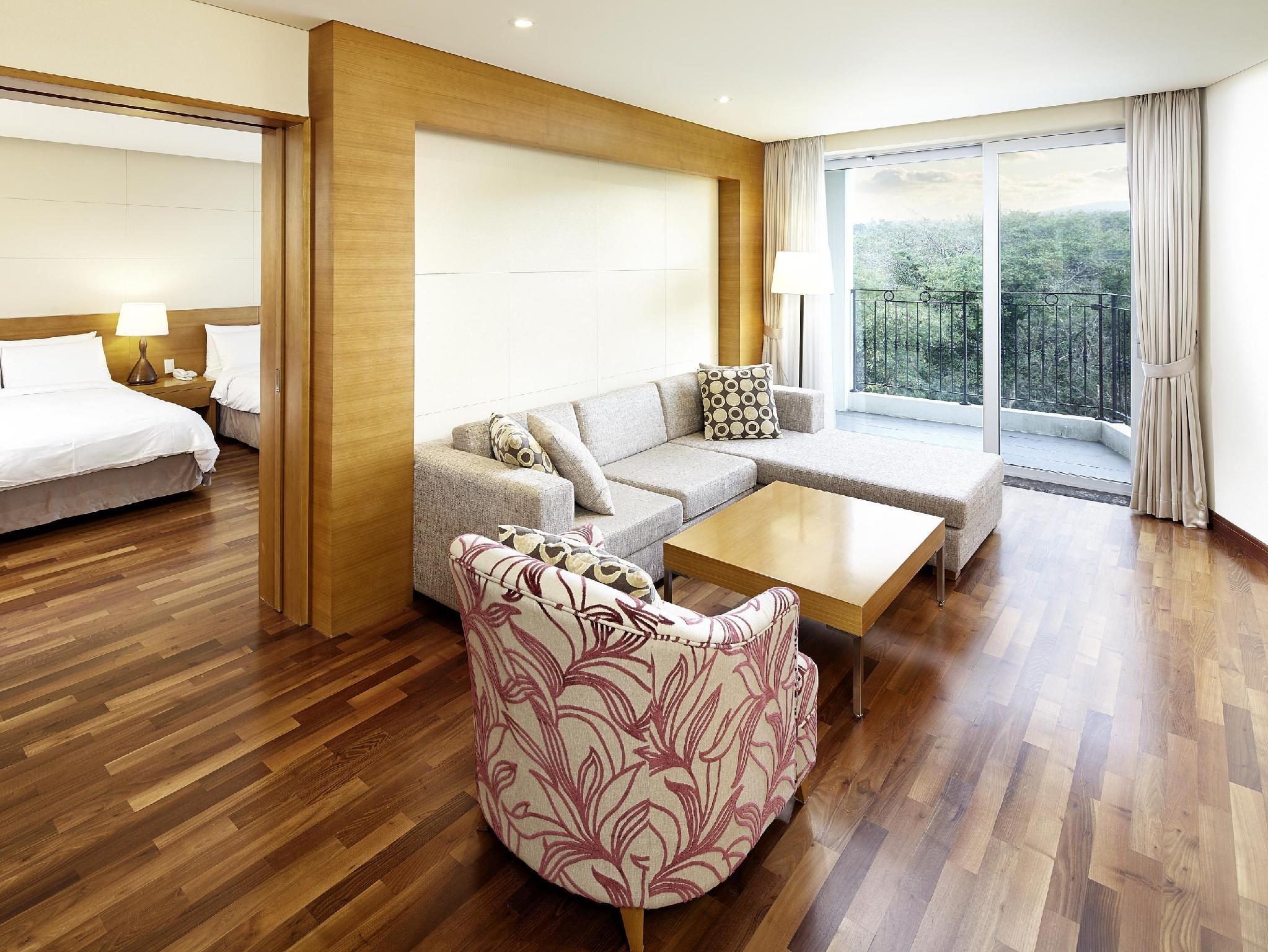 Room photos and details
Suite A
... 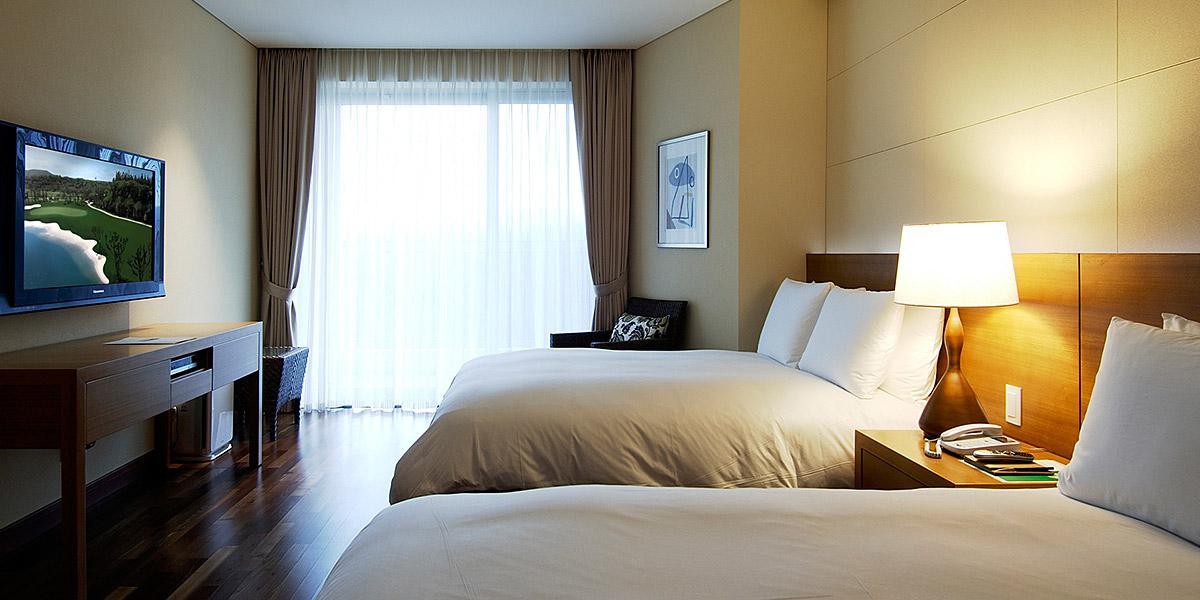 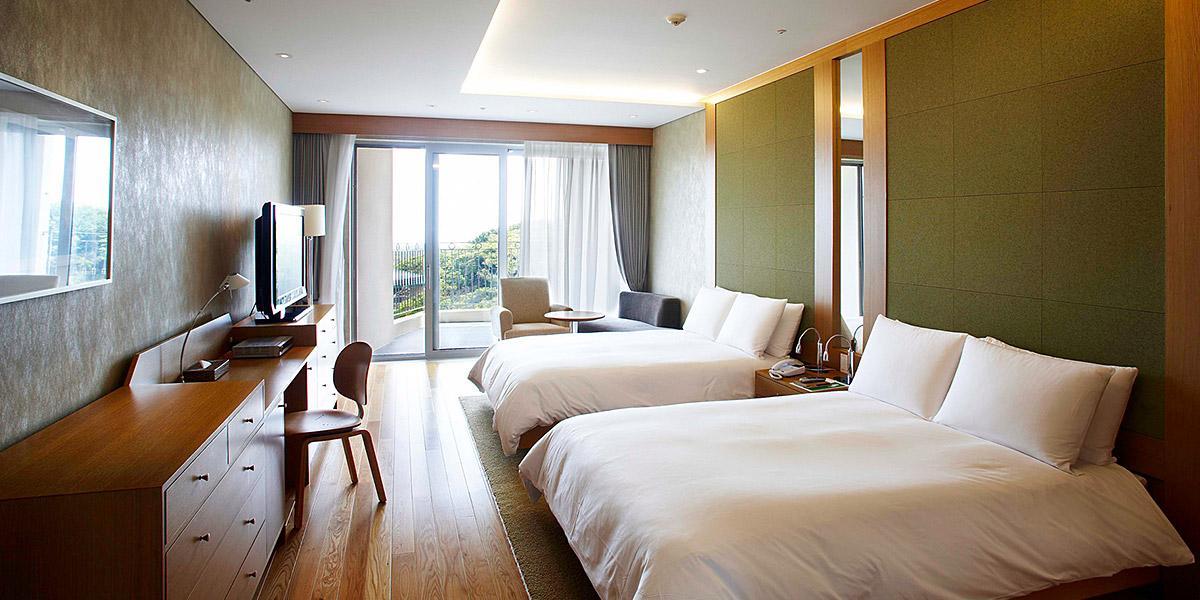 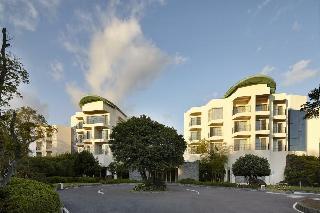 Room photos and details
Suite B
... 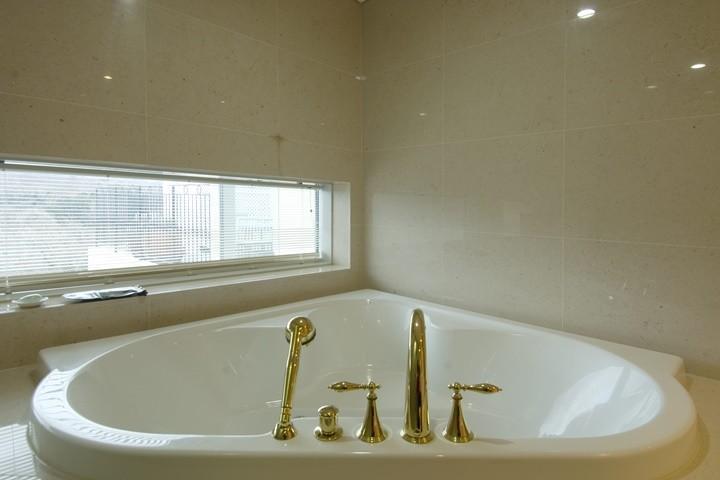 What time is check-in and check-out at Hotel Teddy Valley?

Check-in is from 03:00 PM, and check-out is until 11:00 AM. You may request early check-in or late check-out during booking, subject to availability. Guests checking in or out before or after the designated periods may be charged an additional fee. The resort offers luggage storage to guests for before check-in and after check-out. The front desk is always open, day or night.

How do I get to Hotel Teddy Valley?

Hotel Teddy Valley is easy to access from the airport. In fact, you can even book your airport transfer in advance for greater peace of mind. Just use the "Let us know what you need" section of the booking page to let the resort know you want to book a ride, and they will contact you via the Agoda messaging service. For those who wish to drive their own cars, Hotel Teddy Valley has a car park on site, as well as additional parking nearby if the first car park is full. Parking is free for guests. Self-parking is conveniently available at the resort. If you're looking for an easy way to get around Jeju Island with private transportation, the resort can arrange taxi service.

What is the smoking policy at Hotel Teddy Valley?

Hotel Teddy Valley does not permit smoking in any of its rooms, but allows smoking in designated areas.

It was comfortable and the Teddy was so lovely.
GYUDONG from Japan
Couple

Whether you're a tourist or traveling on business, Hotel Teddy Valley is a great choice for accommodation when visiting Jeju Island. Situated only 8 Km from the city center, guests are well located to enjoy the town's attractions and activities. A well-kempt environment and its proximity to World Automobile Jeju Museum, Jeju Soingook Theme Park, Jeju Glass Museum give to this hotel a special charm.

Experience high quality room facilities during your stay here. Some rooms include television LCD/plasma screen, internet access – wireless, internet access – wireless (complimentary), whirlpool bathtub, non smoking rooms, provided to help guests recharge after a long day. Besides, the hotel's host of recreational offerings ensures you have plenty to do during your stay. Enjoy unparalleled services and a truly prestigious address at the Hotel Teddy Valley.

"they give me high quality service."

Don't miss out!Popular destination! Properties in Jeju Island are being booked every minute!
All guests (665)
All room types
All languages

A Great Stay, in Grand Surroundings.”

Stayed at the Teddy valley resort for 1 nights. The resort however, is approx 10 mins outside of Jungmun centre. However, if you want to retreat from the world, you will love it here. Check in was quick and the lobby area is full of lovely teddy bears. The room was simple (I liked that), but large and with all amenities required. Bathroom was large with a big shower area, balcony was a good size, with great views of the forest. Wifi worked well. AC worked well. The bed was big and comfy. The restaurant had beautiful nice surroundings, where the Sanbanng mountain was overlooked. The fresh sea urchin Bibimbap, we ate for dinner in the clubhouse, was also good. It was the most enjoyable dinner of my life. The gym was decent, and my partner had a swim which she enjoyed. Staff were attentive and service was good, although the hotel does make a considerable mark up on taxi's booked through themself or airport transfers. Overall, a wonderful stay in a truly special hotel, which if a little closer to Jungmun centre would be near perfect. A really great hotel.

Room, Cleanliness, Value for the Money

During our stay on Jeju Island, my sister and I managed to use 90% public buses, and only the occasional taxi. There was a direct bus from the main city of Jeju, to the Teddy Valley Resort Hotel. It stopped right in front of the hotel. We got a really cheap price for our stay because it's off season on Jeju (we stayed in early January), and luckily, the weather was very nice. But because it's off season, I think the hotel also wasn't as accommodating and didn't have as many facilities open as usual. The cafe/restaurant in the hotel was closed, and there wasn't any room service. There also weren't any restaurants or places to eat nearby, and taxis were hard to come by in this area. The hotel staff wasn't at all helpful when we wanted to find something to eat for dinner, so we settled on the hotel's convenience store ramen. You're expected to have a car, because this is a golf resort. On the other hand, the hotel rooms are VERY nice. They're very large, and we were allowed a very early check in (more than several hours before). The hotel is within walking distance of Hello Kitty Island, but there is nothing else around. You can take a bus from the nearby bus stop, but it's only marked by a sign right off a very busy road. It's on a major road, and is marked by signs, but at night it's definitely dangerous because it isn't a legitimate bus stop. If you want to stay in this area and want to sight see, you're much better off with a place in the Jungmun Resort area (which is where we kept going by bus throughout our trip).

quiet and out of attraction place”

the room is spacious

Check in is 2pm. So prepare to do some sight seeing first before returning to hotel if you arrive in morn. The Staff is friendly and able to speak simple english and chinese. You will need their assistance to call taxi as all of the attractions are out of way. The staff will negotiate with the driver for the price of your destination.... Do ask the price and haggle if you wish. Note that the driver will tend to bring you to other places for lunch or other attractions. Be prepare to fork out more if you do follow him. Also ask for the business card of the hotel for the return trip as most drivers does not know where teddy valley is. The club where breakfast is served. Do check out the robotix teddy playing piano.

It was comfortable and the Teddy was so lovely. I took a lot of pictures with Teddy and Girl friend.

Hotel's location was okay for me, cause i rented a car. All staffs are so kind and there has small convenience store at lobby Spacious & comfortable room. Everything was so good for me. I will go here again when i visit to Jeju next time.

If I were there to golf, the hotel would have been perfet choice. However, I was at jeju to tour. so the locatoon of the place was dissatisfaction. But everything else was great!

Teddy here, Teddy there...Teddy everywhere^^ my daughter was so happy and enjoyed with the stay.

The rooms were spacious and clean. The bed very comfortable.

Granted we stayed at this hotel during the low season of jeju, we were very disappointed by our stay there, especially compared to the price paid. The only positive attributes to the hotel are the rooms which are spacious and clean and the beds that are comfortable. The golf surrounding is also very nice but not very useful if you don't plan on playing. Otherwise the rest was a catastrophy. We had diner at the hotel, our burgers and fries were cold and impossible for the staff to understand that we wanted them heated as none of them spoke English. The entire hotel was deserted and we were left to eat alone in the big restaurant with a scary looking bear playing the piano in the lobby. And mind you, playing repetitively 3 songs from the Beatles again and again. The breakfast was ok, bacon and eggs but we had a very unpleasant surprise when checking out when they asked us to pay 16,000wan for the tea we drank at breakfast and no one had warned us of this! We definitely do not recommend this hotel.

Pros - The room was very spacious with 2 huge double bed. Hotel provided Crabtree & Evelyn toiletry, which added point to the facility. Very comfortable place to stay and if you golf, this is definitely an ideal resort. Con - Everything in the hotel is in Korean included the air-condition control. Staff only converse in basic English. If hotel can improves on this, I don't see why I wouldn't revisit the hotel again.

Reviewed November 30, 2018
Did you find this review helpful?|
9.2
Exceptional
Ohseong from South Korea
Solo traveler
Deluxe
Stayed 2 nights in May 2017

I reserved chip price about 80,000won. but they give me high quality service. I am very satisfied and had a nice time with my mom.

Reviewed May 31, 2017
Did you find this review helpful?|
9.2
Exceptional
Chun from Singapore
Family with young children
Deluxe
Stayed 4 nights in April 2019

Large rooms with large beds except there was no toothbrush provided. Lots of parking available but location was remote so I don't see any way of moving around unless you drove. However, place was quiet and nice.

it is comfortable, but at night is hard to order somthing to eat and last day i lost my glasses at the hotel room but cannot get in touch with the hotel is disappointing

Reviewed September 02, 2019
Did you find this review helpful?|
7.3
Very good
DOMINIQUE from France
Couple
Suite A
Stayed 2 nights in August 2013

nice hotel located "on' the golf”

very large rooms - very limited english spoken - very good for golf - far away from everything, obliged to hire a taxi to move

nice room, clean and 2 bathrooms. very limited english spoken in this hotel - obliged to go by taxi for any destination due to his location far from everything

Staff were very friendly and helpful. Rooms is spacious and clean. Value for money!

Reviewed January 15, 2015
Did you find this review helpful?|
9.0
Exceptional
Bruce from Australia
Family with teens
Stayed 2 nights in July 2015

Friendly staffs, Peaceful setting & ease of getting around

Excellent value for mony spent. Had a very enjoyable stay with friendly staffs in a peaceful setting. Will definitely visit again.

Great place if you were there for Golf”

Just 3 mins away from Hello Kitty Island. But need to drive at least 7km to nearest restaurant.

Next to golf course”

Golf hotel. Location is not convenient and need a car going out for dinner.

it was really comfortable and excellent!

The hotel is nice but far from everything. 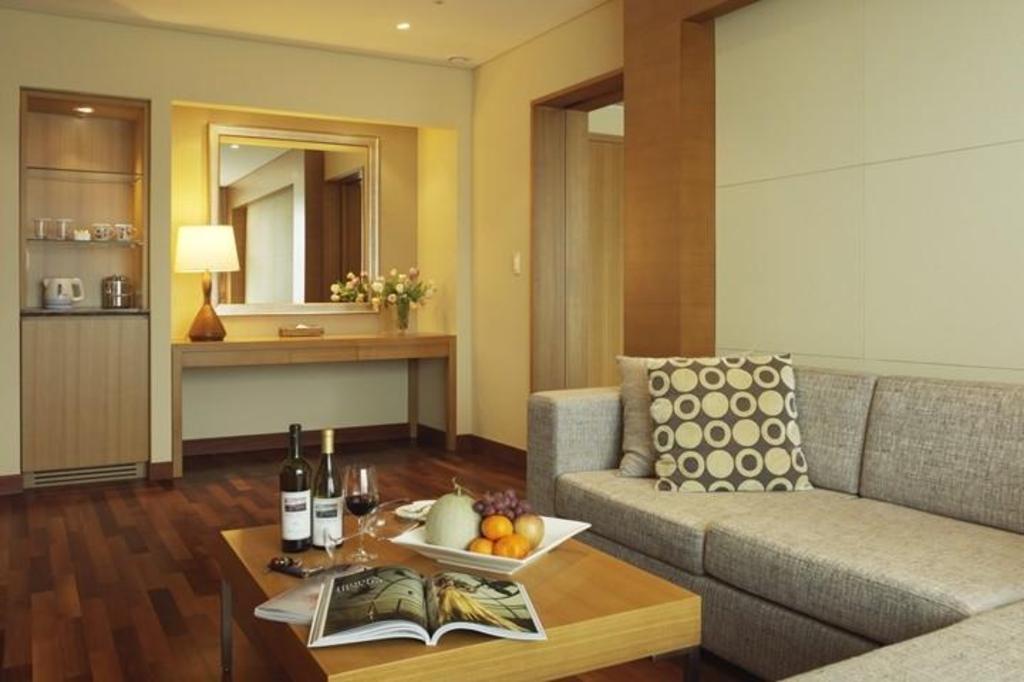