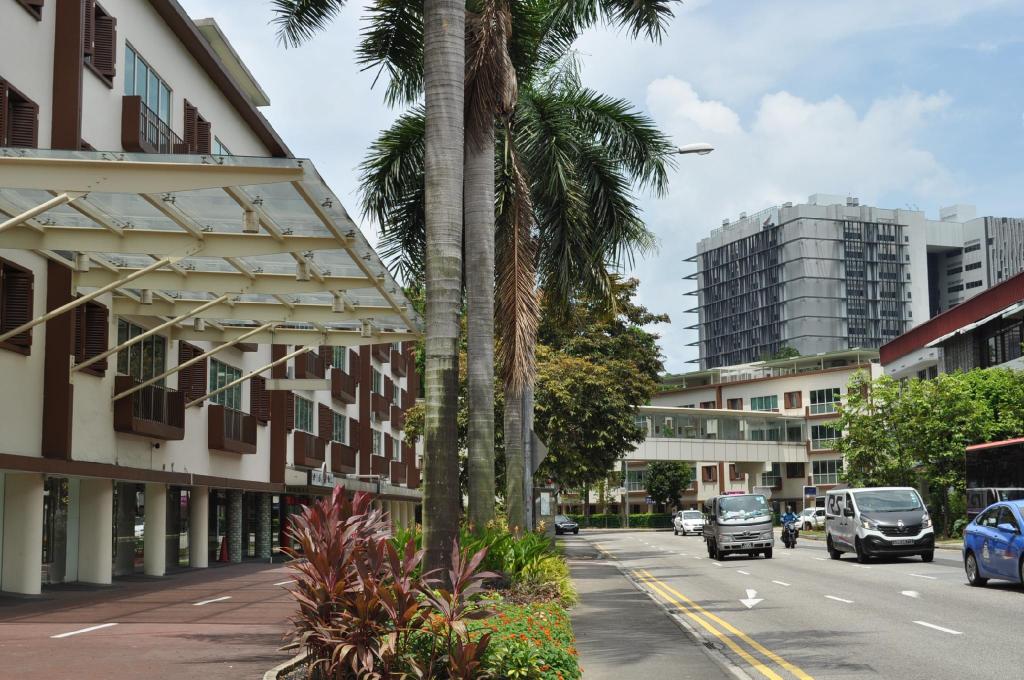 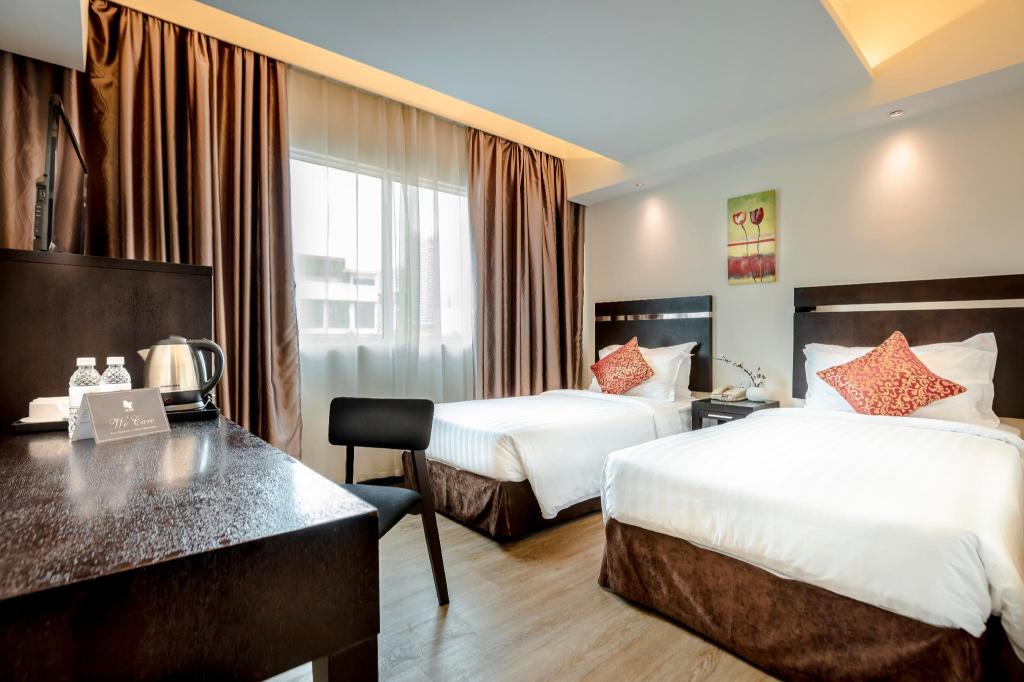 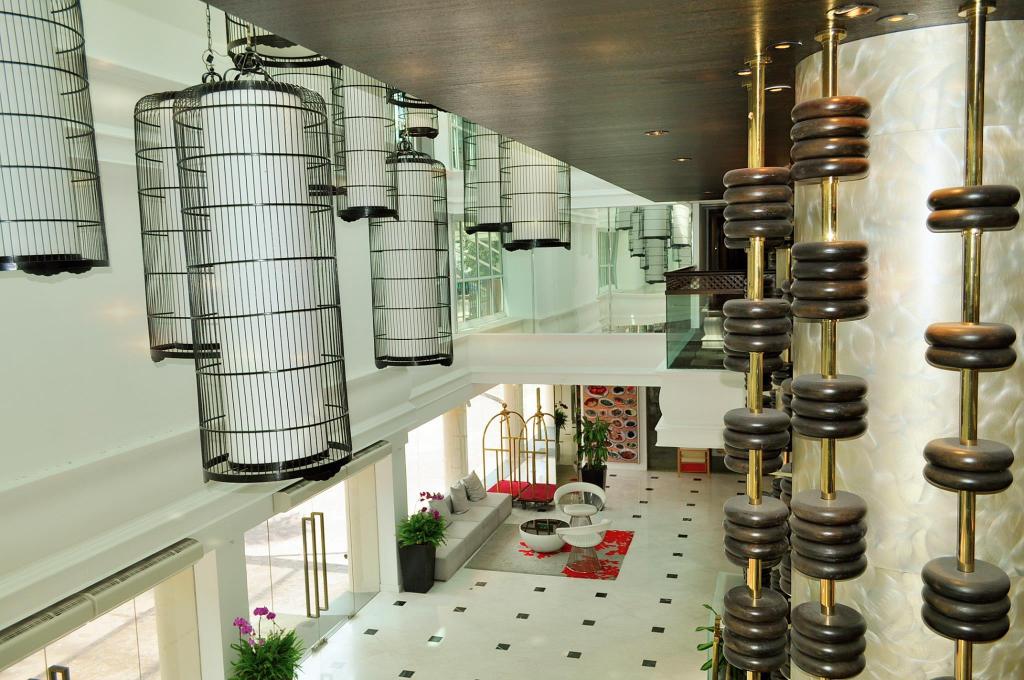 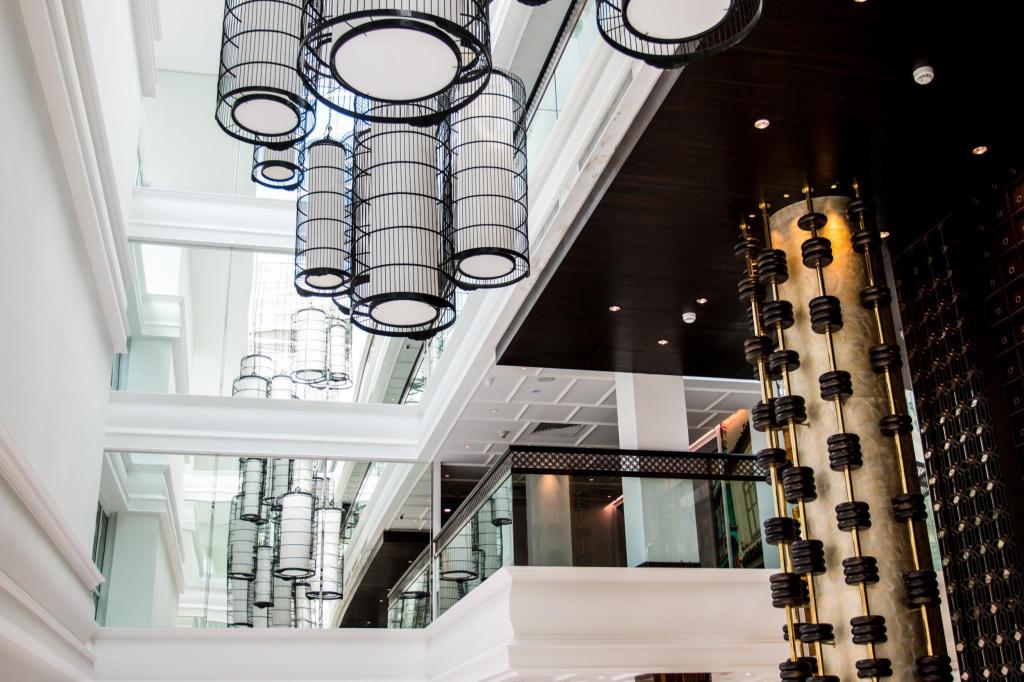 Humble and unassuming hotel located a stone's throw from a large spread of foodie haunts in nearby Tiong Bahru and Chinatown area. Top marks for their friendly and helpful staff. A bit noisy when tour groups check-in or out but management is aware and situation has improved.

It was a comfortable room though the Air-conditioning wasn't strong enough at even 16.

Good enough for a business trip here in Singapore”

Everything was good during my 3 days in Singapore for business trip. I did send email to Link Hotel Managemnet for the best hygiene prepareation before I came to hotel and it was completely done well. Staffs were nice and friendly. Hotel location is convenience enough for transportation. Th only one complain from me is about the socket of room. I am from Vietnam so I use the 2-pin socket and there was only 1 socket I could use so it was estremely inconveniece for me to charge my phone and my laptop at once. Link hotel should prepare some convert-shocket for guest because you welcome guest from many country. Howere, in general, everything is good enough for a business trip here. Thanks, Eric

Reach there in the wee hours of the night (Estimated 5am), went for early check in and prepared to paid a sum of amount for early checked in as we have called upon and was agreed on that there was rooms for early check in. By the time we reach, was handled by a staff named Weng Yee. Handled the agoda booking and paid the extra funds applicable, however while booking, the manager at that point of time stated to Weng Yee that there was no rooms available. (So am i supposed to sit there and had that information that there was a room or not? As a guest, it was informed that there was rooms but when i reached, there wasn't?) so the manager then states that he will check the room itself to see which is available. Stood there like an idiot, Weng Yee just stand there and handle her things while i'm standing in the middle of the lobby looking lost and nobody is there to accommodate to the hotel guest? The manager arrived and state there was rooms, then they continued to talk infront of me and leave me waiting there like one idiot. While Weng Yee was handling the check in document, she didn't informed that she was doing the check in, so basically AGAIN, i was standing there until she said 'please sign here for the room' THEN, suddenly she said there was a need for deposit, at that point of time there isn't enough cash for me, so i told her to take credit card as deposit, thus, i'm not sure what was going on but then the manager came to scold her and said that she can't put card and cash received together in a receipt. (So is this how a hotel handle their staff infront of their guest?) The checking in phase was terrible for me as a guest. Tried calling agoda, and unable to get through for 15 min on the phone.

Boutique but not close to MRT”

Link Hotel has a unique history and located a short walk from a great hawker food centre. Hotel is clean and elegant with special Singapore images. We were adequately provided with a queen bed and cot, bottled water was tiny but appreciated. Taxi/Grab was more convenient than waiting for bus or walking relatively far to MRT (with children, outdoors). I did not have chance to try the Small gym, rooftop bar, but the reading nook was nice

It was expensive for a place that's not so modern. I understand the it's a new year ,that's why it's kinda expensive for a night to be $230++ . Everything else was fine, as there's a tiong bahru market nearby and a few restaurants around. A rooftop bar that I didn't get to try out, otherwise the rest is pretty normal or basic.

This hotel is amazingly a right choice

Won’t recomend anyone to stay here”

Cleaners not that cooperative to change the bed sheets n the assistant front office manager Mr authur seetoh talks to me with attitude. N the room fees are $200 plus I Dont Think it’s worth this pricing

The only thing good about the place is its location - very connected in terms of bus routes. Room is small and old. Furniture is old. TV is tiny. Bathroom door has no lock! Don't understand why they can't install a lock on the bathroom door. Will not come again.

i arrived with my guest - my form showed 2 guest 2 nights. The system showed otherwise. Staff couldnt make changes. Manager came and inform me, i have to call agoda to cancel the additional rooms i booked. Both agoda booking email and voucher showed i booked 2 rooms. Why is it i have to call agoda to cancel the booking i didnt make. All these while - they have not check in my guests. The check in took almost 45 mins. In times like this - the manager should have check in my guest first instance. take the responsibility to cancel the rooms and not push it to the customer where my email & voucher showed i did not make the booking mistake. And the icing on the cake was while i was sorting it out with the manager, his front counter ask for payment for the rooms FROM MY GUESTs. Please think would i ever book LINK hotel again?? Thank you for reading and good luck.

Place was clean and the room was neat. Food was readily available everywhere. Only down side is that Outram MRT and Tiong Bahru MRT is about a 10minute walk away from the hotel. And since the corridors are pretty long between different wings, you could hear the corridor conversations when certain guests spoke loudly. Free parking for guests was a bonus for my visitors.

Location is right in the middle of all the eateries in Tiong Bahru. MRT is a bit of a walk away but there is a bus stop right opposite the hotel that will bring you there. The rooms are relatively small but it is sufficient and clean. The rooms are decently sound proofed as well as we got a room right next to Tiong Bahru road and it wasn't as noisy as we expected it to be. There was though a very very big tour group that was staying there so that part wasn't the greatest - noise and all, but that wasn't the hotel's problem. Overall a decent two nights stay.

Too crowded so noisy”

The good things about this hotel are the bus stop is in front of the hotel and also so many restaurants n market surround it.The one thing i really dont like is very noisy hotel even in the late night or early morning

The room looks good, however, it was smelly, like the smell of wet clothes in an air conditioned room. I think because of the bathroom and the building itself is old. You can also hear the people along the corridor and in the other rooms. They didnt have complete toiletries. The staff were not that friendly too. I checked in early, but they did not allow me to stay in the room yet, they offered to keep my bag though. I was asking for wifi while waiting at their reception as I was 3 hours early for check in. I just needed to check a couple of emails, and get an Uber, but still they did not give me access to wifi. Basically, it was disappointing.

Well located around Tiong Bahru. Great restaurants, hawker stalls, coffee houses and cafes close by so you don't need breakfast at the hotel. The hotel is not high rise (only a few storeys) but spread out over 2 buildings. Rooms are comfortable, but sometimes the noise from buses can be a little disturbing, if not unnoticeable.

During check in I tried to ask if my rooms are connected and is it on the same floor because I requested for same level and connecting rooms. One of the staff replied yes. I was very glad that the hotel did this arrangement. He didn't offer to send us to the room, but his colleague did. The distance was a little far as I have an elderly with me. Then to find out that my room was not side by side and only on the same level. One of the rooms, the toilet door couldn't be close completely. I was so upset that I want to make a call to the reception and found out that the phone was not functioning. (double up the fire) Then I went to the other room to make a call, the same guy who told me that I have got side by side rooms said he did not say that and only agree to the request of same level. (it's fine) After 10minutes, no one came up to check when the front desk mentioned the maintenance team would come up immediately. Then I decide to leave for my appointment. I tried calling the hotel again and finally got reply by the Duty Manager that day. The toilet door couldn't be closed is because of the design she said. Then she couldn't change the rooms for us as it's a full occupancy. The duty manager wanted to give us a good experience by upgrading our rooms, but it turn out to be that the toilet door couldn't be close due to the design of the room. I am wondering who would like the toilet door to be open when the toilet is so near the main door of the room? I don't think the hotel should have this room offered to the guest. What if there is someone at the door and someone in the toilet? I was very upset with this stay, but thankful to Carol the duty manager for the day for helping out and tried to solve my issue.

Bookes this place for a friend and his family. They were overall very satisfied with the stay. Location was near the old estate of tiong bahru which has a string local vibe but still just 10 mins from orchard road by car.

Value for money, but small room.”

This was a reasonably priced hotel which was value for money. My room was very small, but adequate for a short business trip. Breakfast buffet was acceptable but no more. Location is not convenient for MRT but fine for buses and taxis. 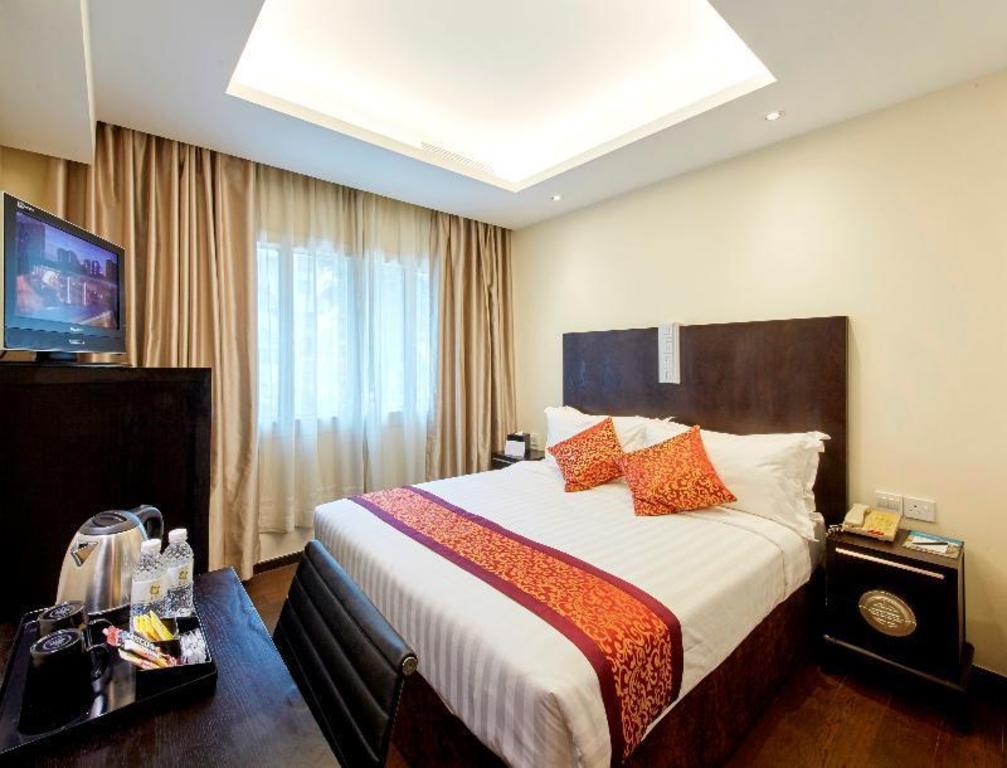 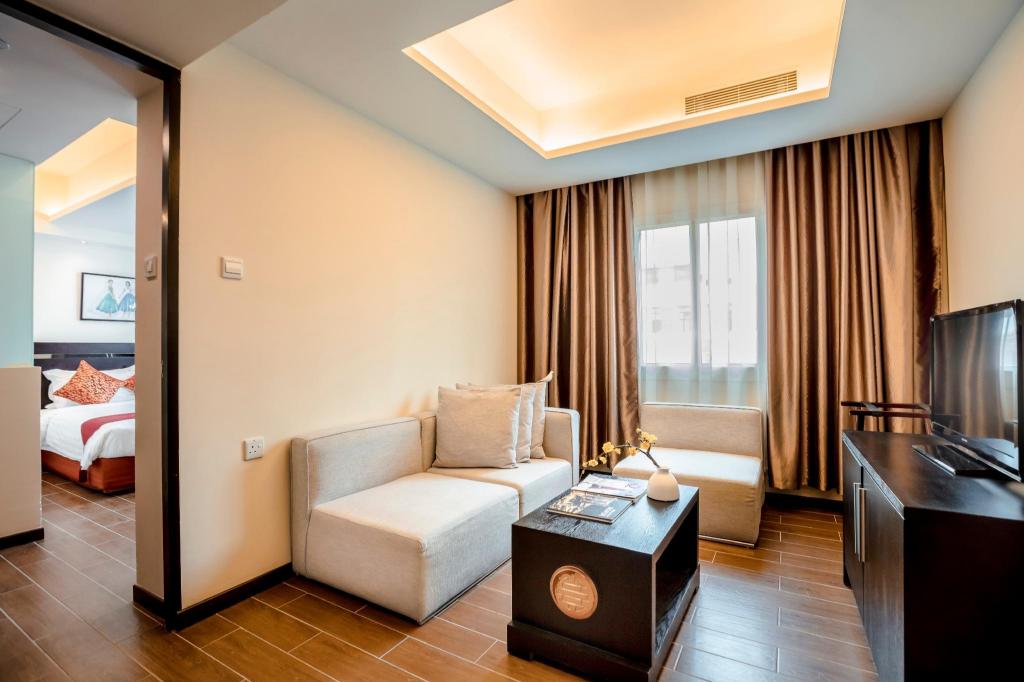