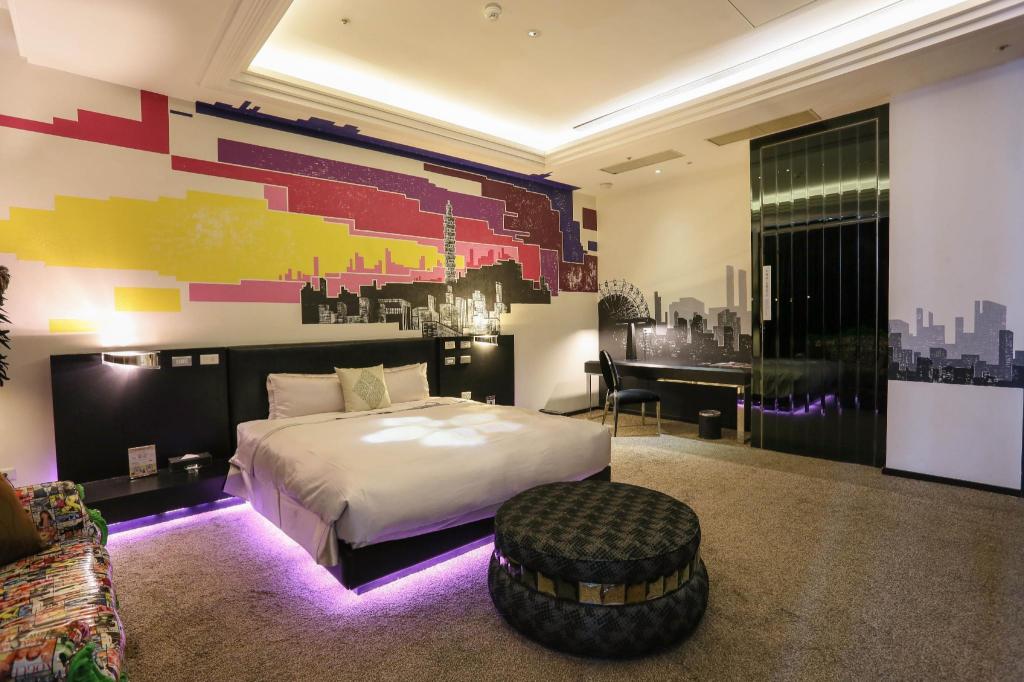 I enjoyed my stay here; the lovely suite I booked is bigger than my Hong Kong apartment! However, people should know this is a love hotel; there was absolutely no indication given to this effect, and that might affect a traveler's decision. Also, the English proficiency of the staff is limited. Because of this, when I asked for my room to be cleaned the second day, they misunderstood and my room was not cleaned until the third day. Because this is a love hotel, check in time is 6pm, which I found rather inconvenient. With all of that said, the Cloud Suite was gorgeous, and I enjoyed my stay!

The place is very private and secretive. You have your own parking garage, lift and huge posh theme room equipped with high technology controls for jacuzzi, TV, sauna and many more. definitely an eye opener and a must try!

Is a very wonderful trip for me and my wife, the room is big and the facilities are wonderful. you can take anything from the mini bar and also with some snacks provided. The best is the hotel provide 4 free Adult channel. And the restaurant is super nice.

It was an enjoyable stay and very value for money

Everythings are good to exellent, exept English proficiency of the staffs.”

Lavish and large room, especially the bath room. It is really a spa experience. Well located. 5 minutes walk to Mariotte. The only problem is English. If you can Chinese, it would be wonderfull. But if you can't speak Chinese, it could be nightmare .

Everything was great except for the following: - pillows were super soft, one was too low and two was too high - bathroom had a wall with water leaking to the floor - breakfast was under average But again, the rooms were huge but we could hear our neighbors.

It was a wonderful experience!”

Was initially disappointed that the room (butterfly room) we have booked does not come with a personal car pouch (below the room). But when we checked with the staff, they were kind enough to upgrade our room to one with personal car pouch. It was really convenient as it's the last day of our trip and we were travelling with bulky lugguages. Just have to take a lift up to reach the room. Room was really spacious, complete with nice deco. There are no doors to separate the shower and toilet from the Jaccuzzi. However, there is a wooden door to separate this area from the main bedroom. Breakfast was great although it's not buffet style. You can select the Chinese set or Western set complete with a drink of your choice.

the nearly a good hotel report”

The hotel is not designed for anyone to stay there for more than a few hours, I believe you can rent the rooms at an hour at a time, How man hotels have nowhere to hang your cloths, nothing not a coat hanger or cupboard or walled robe, ? no draws to put your or sock, t-shirts. S This hotel is not child friendly, pre-child friendly There is a large Jaquez which is good and a very good shower for two people. But the wash basin is the worst I have ever seen, the total depth is around an inch or less of water in the bowl because it is so shallow. At breakfast, and you notice the distinct lack of food in the restaurant, just a card which says western food or eastern food. So the server arrives and asks do you want western or eastern food. And you have to take it on face value that they know the difference. If you ask like I did then they say western is bread, cheese, Lettuce, omelet. No fried or scrambled egg no bacon no sausage, no toast, no butter, no orange juice. And the eastern was little better with only one sort of dim sum pork, no buns a small bowl of strew with boiled rice. I declined both and crossed the road for a full English /American in a coffee shop

Be prepared to be AWED”

There was a secretive atmosphere about the place - from driving into the garage, parking in your own personal space, having your own personal lift up. The best part was opening the door to the humongous (Maple suite) room - WOW!Did not expect the room to be so huge (better than the pic. The bathroom area was as big as the bedroom. Expect soft lightings and romantic music upon entering. I spent quite some time exploring every switch and remote as it was all so fascinating. The jacuzzi was the best part, and they provided a bottle of essence oil for your bath (really amazing!) Nothing to shout about the service as we hardly get to meet the staff - most of the time spent in the room and bathroom. Breakfast was okay, nothing too fancy. Pay a small fee and you get to enjoy the breakfast delivered (via a secretive cupboard) to your room. You don't even need to take a step out! Having a romantic stay at a love motel is a must-do if you are in Taipei! Did not seem as shady as the term suggests - I would say it's one of the most luxurious stays I ever had in any hotel.

Near Station and Shopping Mall

was in taipei for the year end party at 101 party. stayed only 1n there, cos couldn't get a hotel during the year end peak season in taipei. but no regrets, enjoyed the stay well. there's no hotel reception lobby as it's a drive-in hotel. administration all done at car park entrance booth. private parking garage provided just below our room, though we did not drive. room accessed up the stairs from the garage. huge room. probably enough for more than 2 king sized beds. had preset ambience lighting which can be turned on with a click on controller. comes with a huge lcd tv with looked like good av system and free video-on-demand access. but no time to try them due to late night out. however enjoyed it's jacuzzi and ambience, which comes with a nicely decorated fountain/waterfall beside it. another tv was right beside the jacuzzi for you to enoy while soaking. breakfast - either set of american or taiwainese. it was tasty enough, but portion was to little for a big guy like me.

Excelent place to stay in Taipei

I really enjoyed that MOTEL. It is a bit out of town but as long as you use MRT you'll be fine. The rooms facilities with Whirlpool, super large TV, very big room and and and are excellent. It may be 'love-hotel' or whatever but it is a very comfortable place to stay. The b'fast is OK, but the service in the restaurant was VERY SLOW. I had to wait for 30 minutes for my coffee - the resto was not busy. Other than that all perfect. I would definitely stay there again.

Closed to facilities and transport

Only if you add a fixed safe to keep our stuff in safety.

It is not very close by the subway station as it is a motel. About 10 to 15 mins by walk to station. The room is spacious and the bathroom has a nice bathtub. We stayed in the Maple room for 2 nights. One thing I am not impressed is the lighting. The room is pretty dark. I guess they just try to create the romantic theme, aka the Bang Bang room, if you know what I mean.

The rooms are very big and comfortable. Pulled up in a taxi, which isn't ideal for checking in a the toll booth front desk. I had a check-in time of 5 PM, arrived at 5:02, room wasn't ready until nearly 5:45 PM. I had to sit in the corner of the restaurant , which wasn't ideal. Definitely used my wetwipes to sanitize remotes and handles first thing upon checking in.

Thank you for your reply. We are very sorry for the inconvenience. We will upgrade our hotel equipment(big lobby). Hope see you soon again.

Butterfly Room is probably too expensive”

Good Stuff: Size - 36sqm Decent size for a motel which has spacious toilet and bed. Definitely a good place for you to have some bubble bath and good sleep. Location - nearest mrt is Jiannan Rd or Xi Hu Walking time of 7-8 mins. The motel is not near any tourist spot at large but the mrt will be able to take you to most of the place you want. Need to compromise the location for the size of the room. Bad stuff Price - a bit overly price Check in area - late check in @ 1800 only and there is no proper check in area but since this is a motel, you cant expect hotel services. No wardrobe - there is no place wardrobe for you to hang your clothes in the room so you can properly leave your clothes hanging around the chairs.

Location is far from the MRT station, took us about 10-15mins. The lobby is at the carpark which is behind the motel. This is suitable for couple. Super love their breakfast! The room and bathroom are very big. The cons is the light. The scene light is flicking above our head. The room is so big that I feel like someone is watching us sleeping. I didn't have a good sleep but my partner slept v well so it could be just my ownself paranoid. 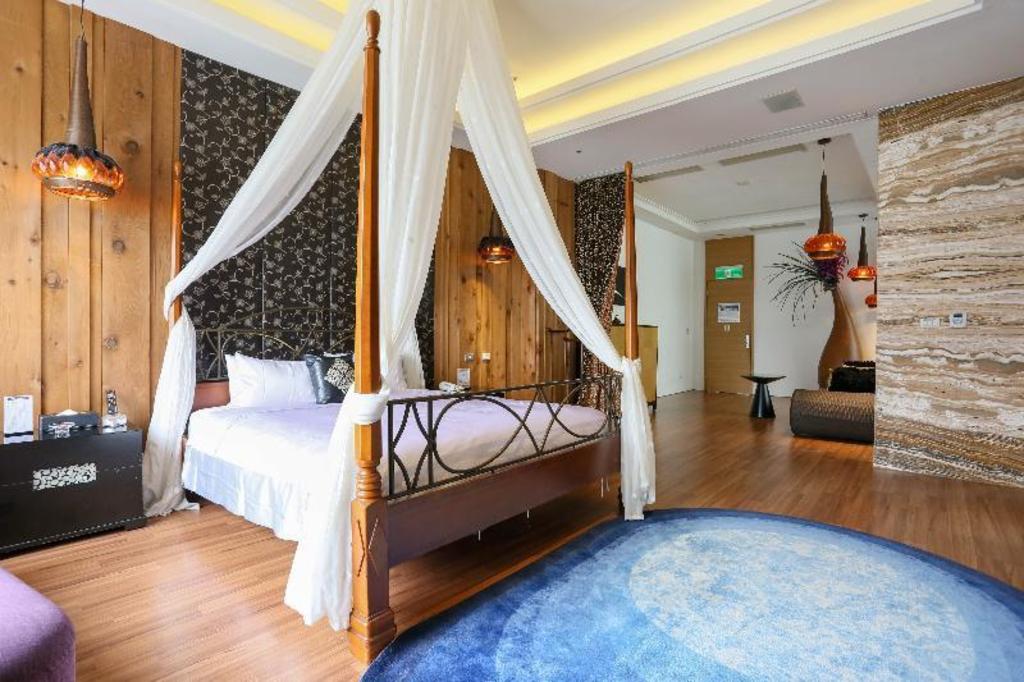