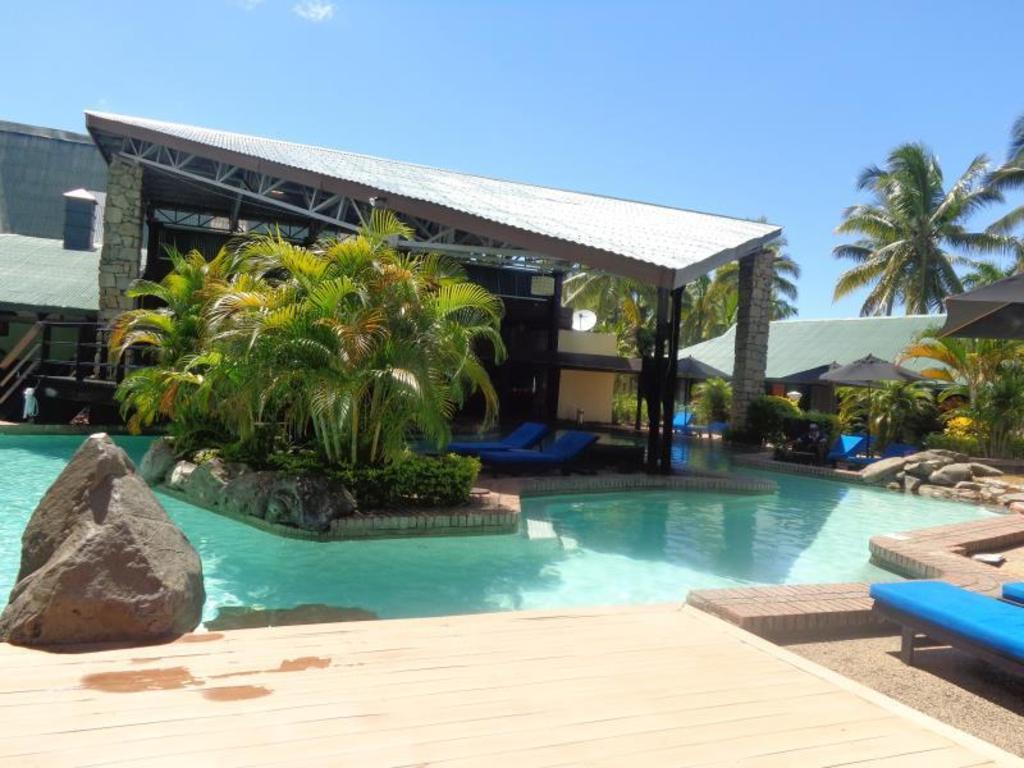 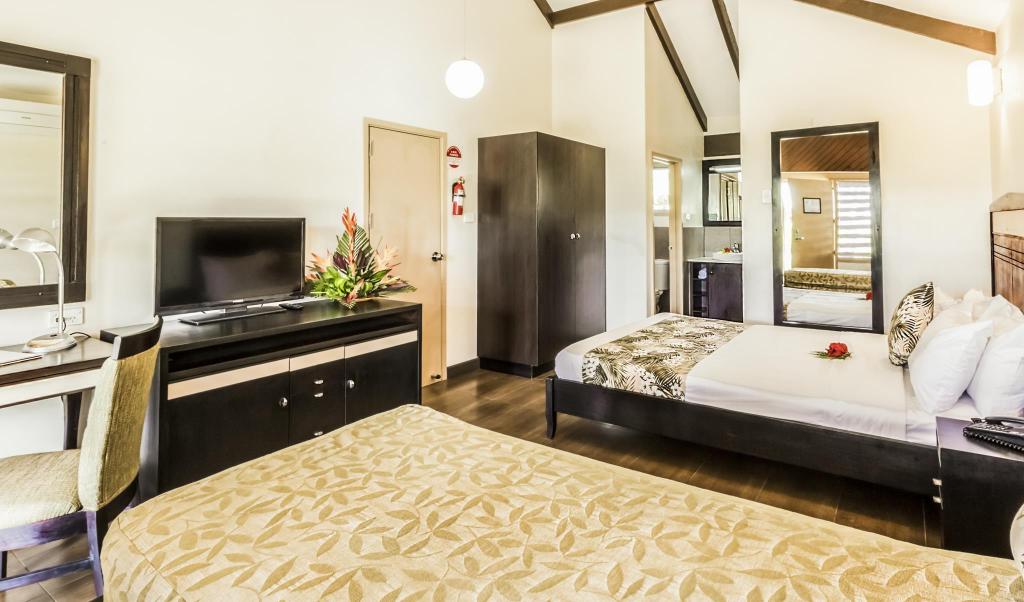 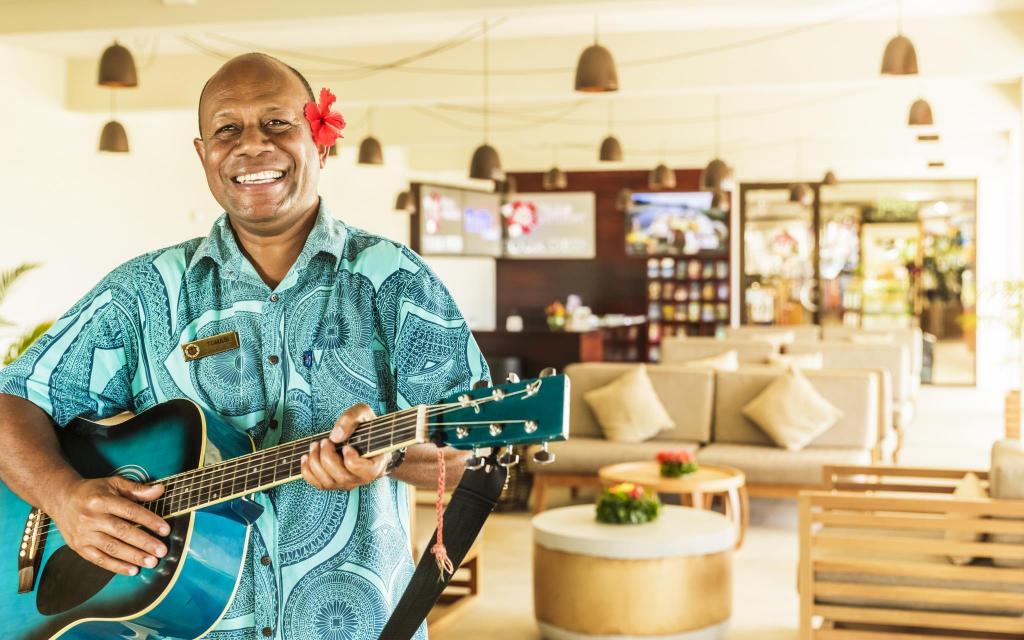 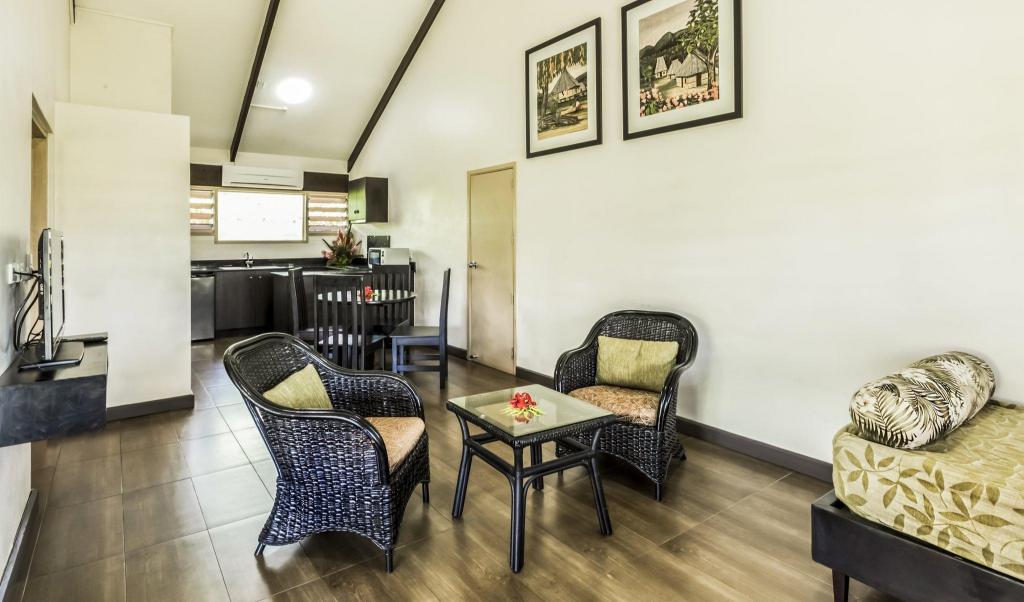 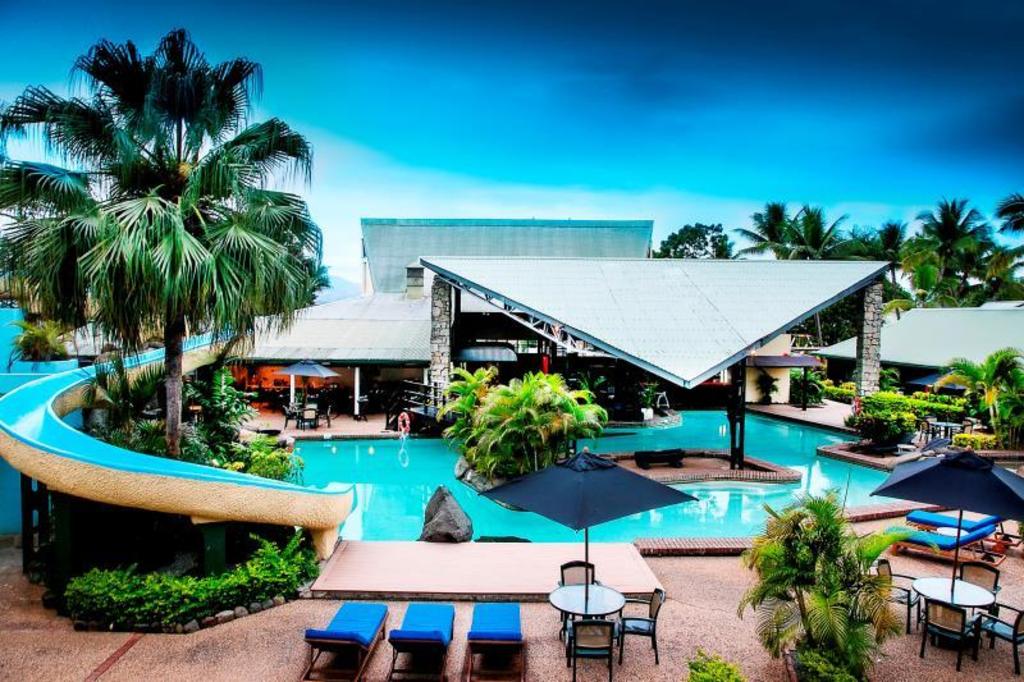 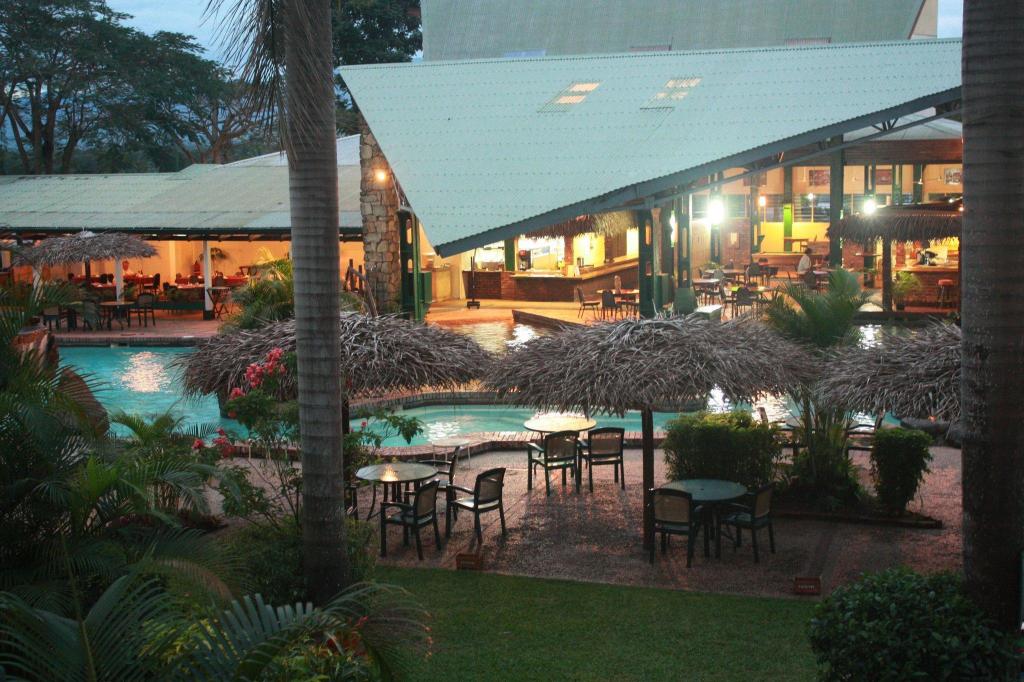 Walking distance from Nadi airport arrivals hall (they have a transfer bus as well if you are carrying your kitchen sink, too). Big rooms that have been modernized, a pool area with lounge and restaurant. Friendly staff, good food, and vicinity to the airport makes this idea stop-over hotel if you are using Nadi as base to explore other parts of Fiji or its resort island ; or island nations close by (Samoa, Tonga...). So fly-in, check-in, eat and rest well, and fly-out following day again. Very convenient. Of course, this is not beach side resort - in that case you need to look elsewhere in Nadi. But as airport hotel this one is great (and I would say better than the hotel next door). There are other airport hotels, from big branded hotel chains close by also, but this one is walking distance, and the room-rate is Ok !

OK if you do not want to read at night”

The service is about what is to be expected in Fiji. The food was OK without being great. The room was good with high ceilings that help with tropical heat (plus aircon of course). However, we were very frustrated by the low level of lighting in the the hotel. It was quite inadequate if you wanted to read in any of the rooms at night, even when every one of the lights was turned on. Surprising really because Warwick run good quality hotels and we have used them in other countries. However, in Fiji, low level lighting seems to be common.

Good for a stopover, but not much else.”

We were here for one night which was fine. Room was extremely dark and loud being next to the airport and not having windows that sealed (just wooden louvres). Shower over bath was small. Pool was nice, and restaurant food was delicious, but we got destroyed by mosquitos.

great staff- great location room was great...one thing i do need to point out though is that i stayed at the hotel 3 times and each of the 3 times i booked studio room. I was given a different studio room each of this 3 times in terms of size. The first time was a really good sized room . Second time, i was travelling with 2 infants and the size of the studio room was a bit small for my family- lucky it was for one night only. The 3rd time i booked the studio room was perfect size for my family- a big sized room. So you might wanna check out the room size of the studio room before you book to see if it suits you. Other than that i am really happy with the hotel and will definitely stay again.

The only negative is that we woke up (including our 5 month old baby who was screaming due to getting such a fright)to a bunch of guests arguing right outside our room at midnight (Friday 14th June- Saturday 15th june). I then called the reception to let them know and they had security straight on it and they handled it very well shutting it down within a few minutes. Besides that the toka toka was a great place to stay and we will stay there again next time we are in fiji. We had an early flight and the staff were very helpful with our flights and even shuttled us to the airport for free.

Very near to airport”

Good location for us as it is only 5mins ride to airport. We never inform hotel that we will be checked in late and our booking of family villa was not available this they give us Executive suite which I am not sure is it an upgrade or downgrade, however they gave us 2 additional single beds as per what available in family villa. There is no towel/floor mat in the room and I called reception 3 times to request as my kids needs the towels after swimming. We stayed for 2 nights and the floor mat was gone after housekeeping, no replacement. However the environment and size of the room is good and we would recommend this hotel if anyone asked.

Inexpensive and pretty good for a night near the airport”

Got a cheap deal (approx $85AUD) and it was easy for one night. The free airport shuttle was good. The pool (especially slide) were in heavy use by families so I assume they were good. Our room was clean but some of the soft furnishings were a little run down (thin sheets, well used pool towels, mismatching bathroom towels). The water pressure was also pretty low so washing hair might have been a little tricky. The room we were in was huge (separate bedroom and living room). It was ground floor with 3 doors to outside and windows that were shutters over fly screens, no glass or curtains/blinds. The light was shut out effectively but it might be a bit noisy traffic wise if you’re a very light sleeper. Bed was comfortable and both rooms had aircon which worked well. Great price and totally fine for a night near the airport but I don’t think I’d stay much longer.

Great for a stopover”

Stayed here for a one night stopover after arriving late in Nadi. The resort is dated but very good value for the low price, being excellently situated next to the airport. Nice to be greeted with a cold refreshing drink. I do not think I could stay longer than one night however, there are plenty of hotels better situated for the full Fiji experience along the coast.

Such a friendly staff and delicious dinner menu”

We stayed our last night in Fiji at the Tokatoka Resort. The staff was so attentive and welcoming. We really loved the room too along with a truly delicious dinner. There were just two problems with the facilities: a) wifi simply did not work in the room and I had to get some work done; and b) the pool was really too cold to swim in. This may be due to a cooler temperature outside than usual, so I wouldn't expect that to be the case all of the time. Hopefully they get the wifi signal to be stronger soon, and undoubtedly it will warm up!

Really close to the airport and the staff who helped us take our luggage to our room was very nice as well. However, within minutes we closed the door, we found a struggling cockroach on the floor. I called the reception asking them to send someone over to clear the mess. The lady in reception said she would send someone over. 15 minutes later, nothing happened. I called again, she said “oh my apologies, will send someone over”, which obviously meant she forgot. 10 minutes later, still nothing happened. I called AGAIN which is the third time. She said someone came already and knocked on the door but no one answered. I said impossible we had been waiting at the door and heard nothing. Then the lady just denied what I said and said “no he did. And no one answered,” implying it was our fault. She said she would send someone over again. 5 minutes passed. I called the fourth time, after waiting for 30 MINUTES in total already. Finally he came, and he said the first time he went to the wrong room, while the reception lady said we couldn’t hear the knocking sound! And the problem is, when no one answered the door the first time, the reception lady did not follow up at all, until I called again. Every part of the incident made me feel that the reception lady simply did not want to serve her customers and to her customers’ time is not important at all. Little respect shown. Highly disappointing.

This is a great hotel for next day travel to the airport! Complimentary shuttle. Great food and pool with slide. The air conditioner needs to be colder. Otherwise we had a fantastic stay! Bula and Vinaka!!

This is the third time I have been put down the back with families who stay up ALL night!”

If you stay here ask for a front room. The back rooms have groups who talk party or laugh dance ALL night. Has happened 3 times now. Great place except for that. Wide awake listening to a party at 3am isn’t fun.

Great accommodation, very friendly staff and affordable meals for families. Close to the airport, but no noise from planes. Great value

Stayed overnight upon arrival in Fiji and a couple of nights on our way back home. Close proximity to airport. Friendly staff, good rooms, beautifully maintained gardens and surroundings. Kids loved the pool. Breakfast provided was adequate.

We found room and beds to be great. Stayed in the Family Villa. Pool was very nice too. Only complaint was some of the staff were polite but disgruntled and strangely sarcastic which made an otherwise pleasant stay uncomfortable. 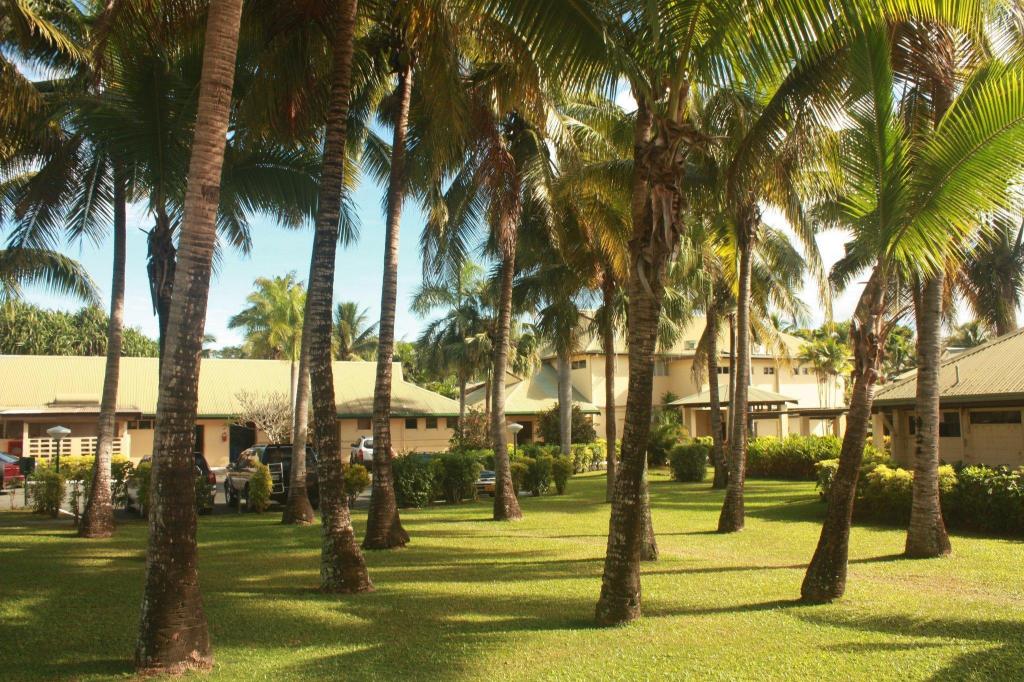 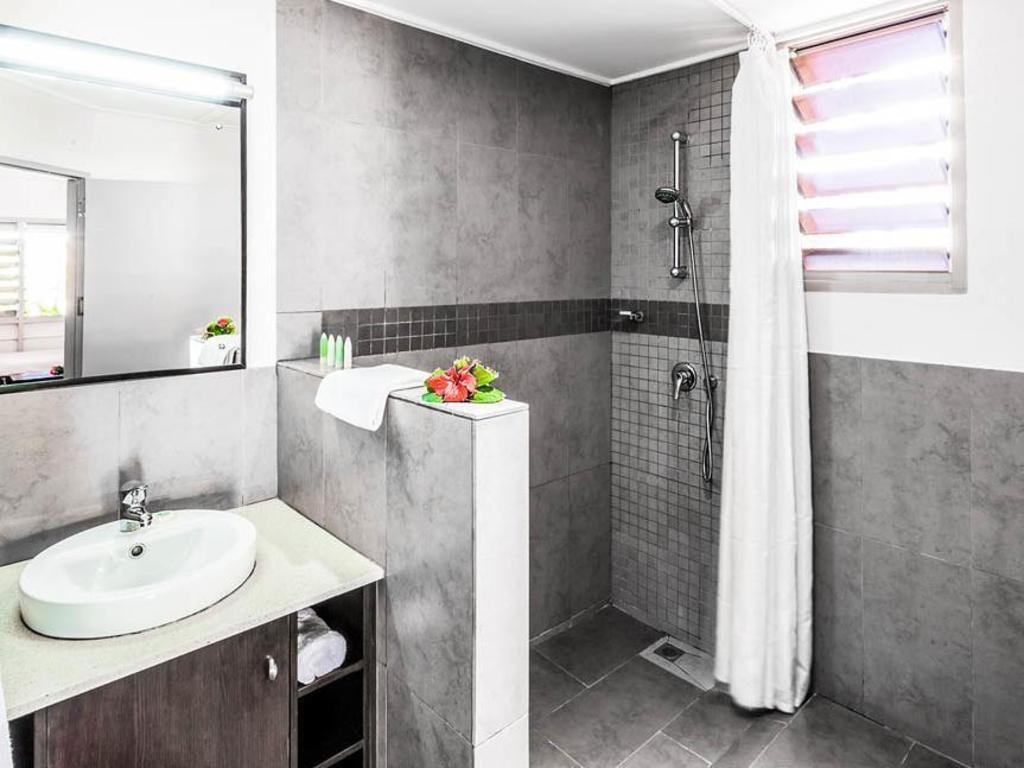