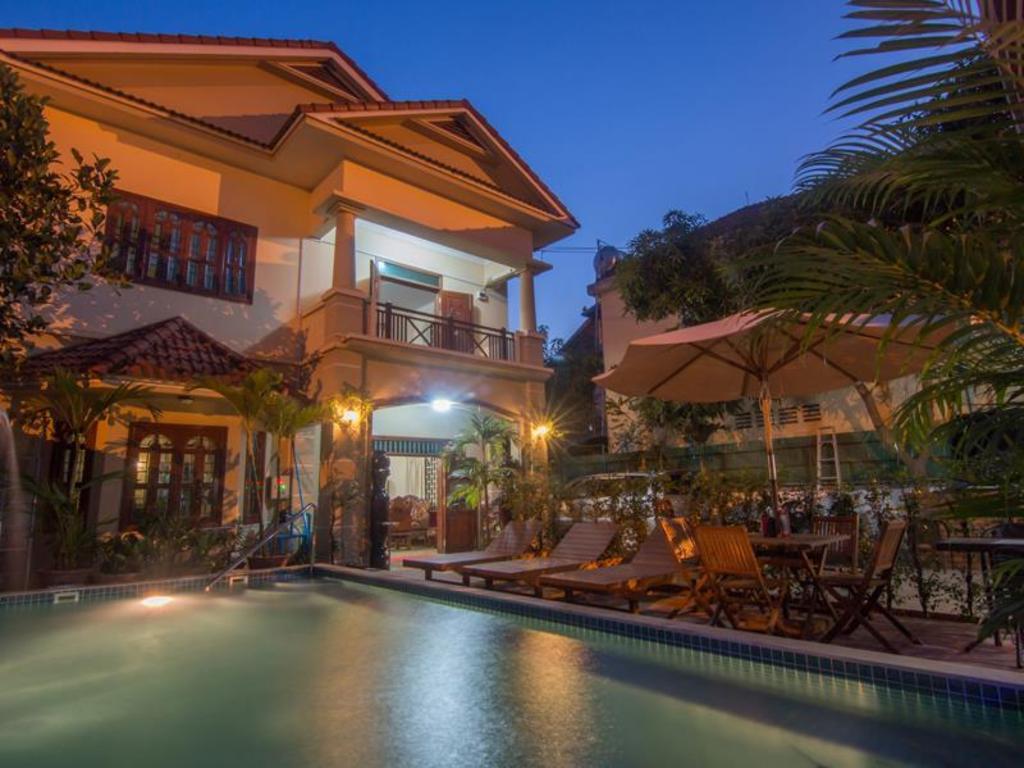 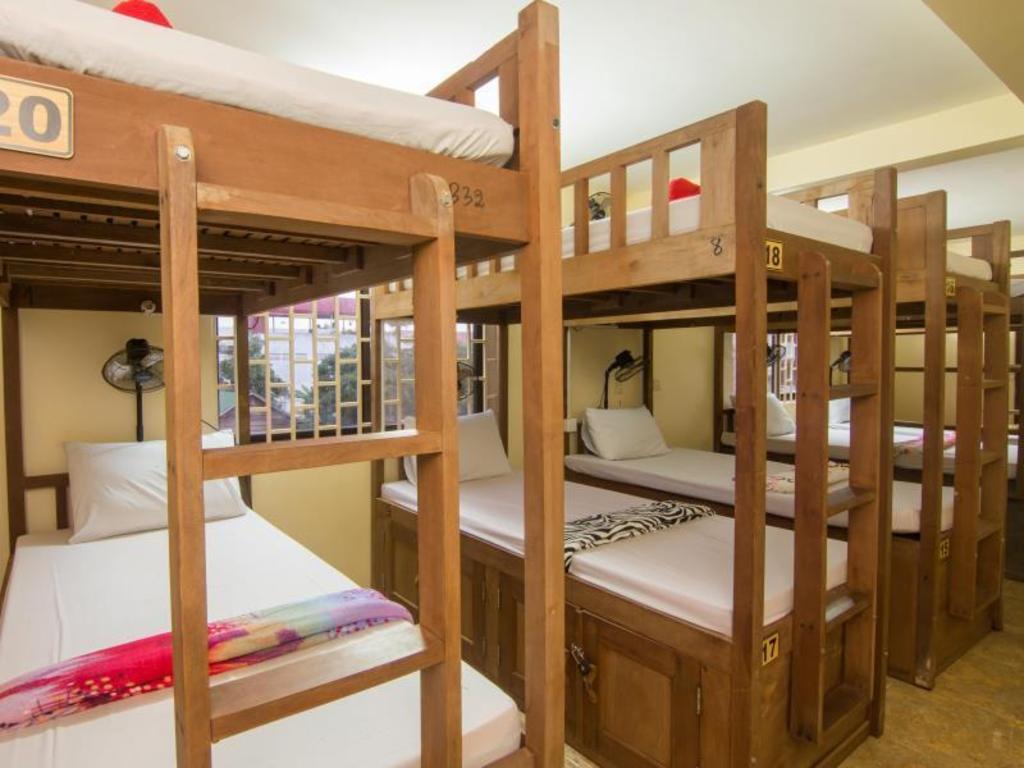 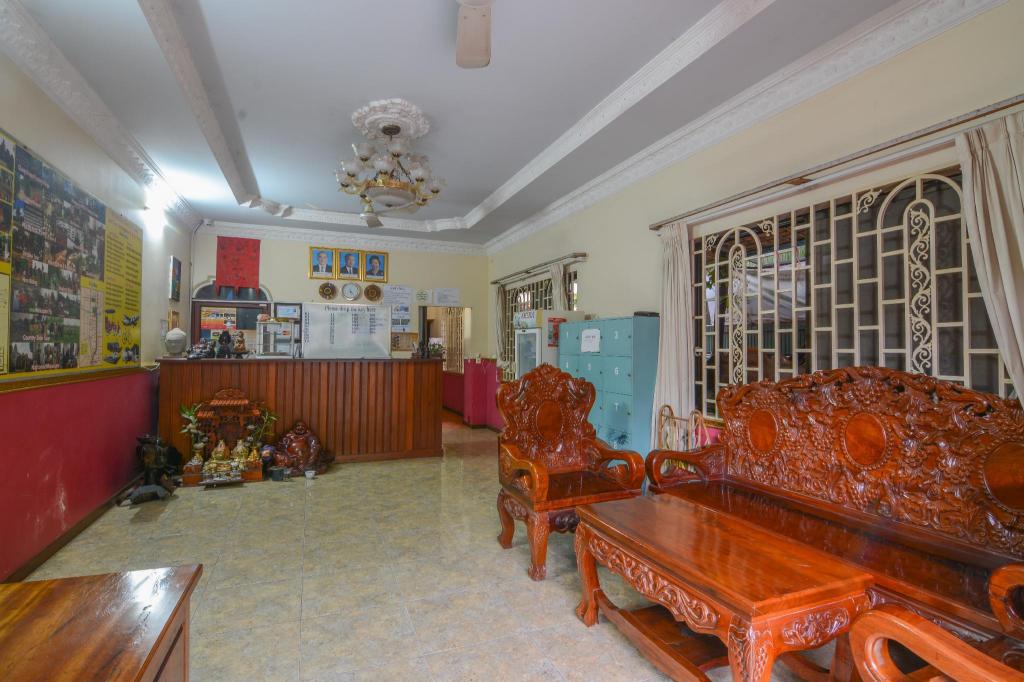 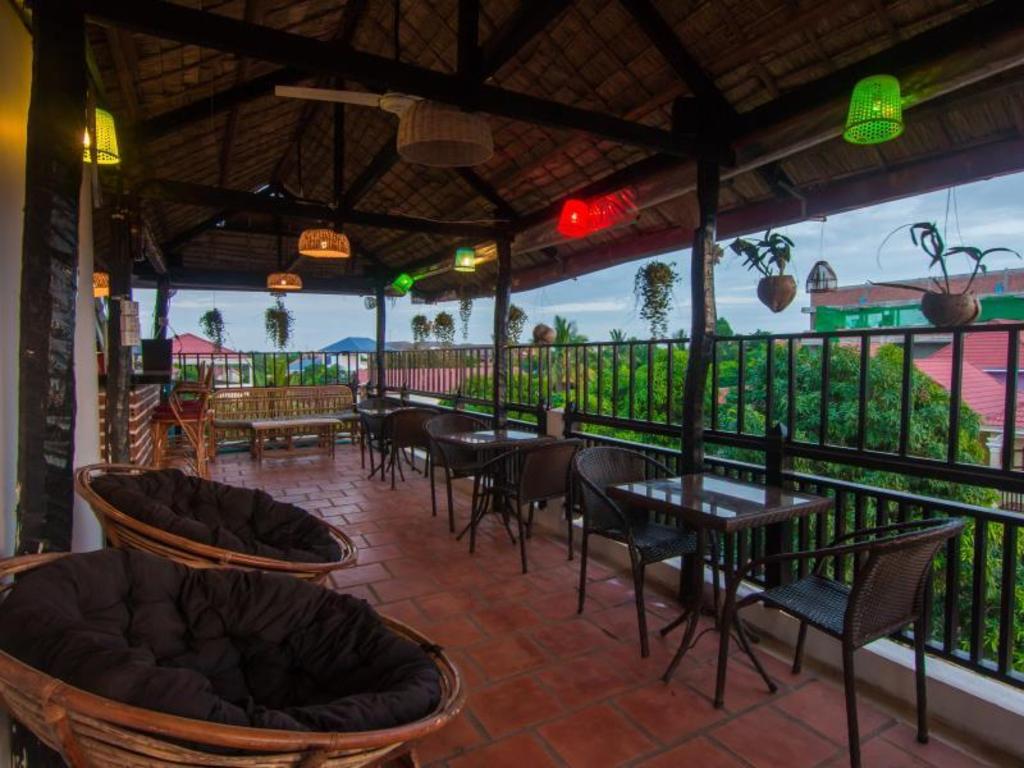 Pension Lodge, located in Siem Reap Central Area, Siem Reap, is a popular choice for travelers. From here, guests can enjoy easy access to all that the lively city has to offer. With its convenient location, the hotel offers easy access to the city's must-see destinations.

At Pension Lodge, every effort is made to make guests feel comfortable. To do so, the hotel provides the best in services and amenities. This hotel offers numerous on-site facilities to satisfy even the most discerning guest.

Hotel accommodations have been carefully appointed to the highest degree of comfort and convenience. In some of the rooms, guests can find linens, mirror, slippers, towels, internet access – wireless. The complete list of recreational facilities is available at the hotel, including indoor pool, spa, massage, billiards. Superb facilities and an excellent location make the Pension Lodge the perfect base from which to enjoy your stay in Siem Reap.

All guests can enjoy a complimentary one-way pick up from Siem Reap International Airport or the bus station. Guests who wish to utilize this service are required to provide your flight and arrival details at least 2 days prior to check-in. There is a complimentary shuttle from the bus station to a destination of your choice. Please contact the property directly for further information.
Show less

I often fly late from Manila to Siem Reap just needing a place to crash for the night before my morning bus to Phnom Penh. I always choose this place, it's in a good central location, tuk-tuk and moto drivers can find it easily due to being on a well-known street (Wat Damnak) the rooms are clean, the staff perfectly nice, it even has a swimming pool and the rooms are a good price. For a simple overnight stay in Siem Reap or even a longer stay but on a very tight budget, I recommend it. There is no bar or restaurant in the hotel but you're 5 minutes walk from plenty of those.

The place is so clean and the price great, I payed only 3$ for bed in a dorm, bed it was ok, good sleep and also they have swimming pool. I will go back if I'm again in Siem Reap.

I liked the Pension lodge. The patio was an awesome and inviting space where you get to meet lots of cool people. The pool was nice to have to cool off bc it was really hot. The value is amazing!!

I intended to write a full review on this hotel but had heard on the grapevine that the Pension Lodge was closed. On this visit to Siem Reap in December 2019 I checked the situation and can confirm the hotel is shut, including the Sabai Bar and Cafe, with no sign of re-opening.

We booked the tuktuk driver through the hotel for 25$ for the whole day for Angkor Wat but you could hire somewhere else for 15$. We decided to book from the hotel because we were leaving our backpacks and other stuff to him. The hotel was so so. You get what you paid for basically. The staff was ok not too friendly but not rude. The location is good about 10 mins walk to pub street, old market and night market so that's a plus but be careful when you walk there at night, wife almost got her back snatched by someone riding a motorbike, just few steps away from the front of the hotel.

Aircon is not cold, we always left it open when we go out. It has fan though but not enough. Exhaust fan is not working. We got tub, but the drain is not clean and a bit clogged. Low water pressure. Need to hold the shower head for the water to reach you. No shampoo and complimentary drinking water. But can be bought at the reception for $1. No remote for tv. Reception is always empty. However, they have recommended us a tuktuk tour for angkor wat at cheap price. You can also avail ticket here if you want to go to Phnom Penh or Vietnam.

Treated very rudely upon arrival, staff wearing only a bath towel (???), staff keen to drive me places and over charge every time. A family lives here too, doesn't feel like a hostel at all. Didn't feel comfortable going to the pool. There are lovely, cheap places to stay in Siem Reap that might charge $1 more than this place (e.g. Blossoming Ronduol) and you should not bother staying here.

I like the room. Comfy stay and i shifted to ac room because fan room is hot. Hope they have hot shower. Pool is nice too. And the bar at the rooftop is amazing.

The hotel was in a good location central to town. However guest before us had trouble checking in the owner claiming that they have to pay again because he doesn’t get the money. The hotel is dirty and looks completely different then on pictures. Staff took 3 days to do our laundry. Both restaurant and roof top bar is closed. Don’t stay here....

Near to the night market”

The owner & the staffs are friendly. Its a walking distance to their night market. They always have a tuktuk ready if you need to use this service. However,the bedsheet is dirty, there's some blood stained. They only provided me shampoo on the 2nd night when I've been asking for it since the time I checked in. The hot water isn't working (well I guess its fine since the weather is already hot outside). They should replace the door at the balcony for the double room (my room) since it already cracked and people can easily take a peek through it.

The room was clean and cozy, the pool is bit small. Half of the staff were trying to do their best as another half were or annoying or had very cold attitude

Reviewed January 24, 2017
Did you find this review helpful?|
5.6
Arnaud from France
Solo traveler
Dormitory - Air Conditioning
Stayed 1 night in May 2017

You get what you pay for”

agoda location on the map was wrong I had to check on Google the real address and the hostel never answered my calls. very long check in due to unorganised staff . no key given to access the dorm bedding in AC dorm was OK haven't tried shower and swimming pool but looked good amazing prices

Located at a walking distance from pub street and night market. Quiet neighbourhood with a few restaurants. The room was clean, but the pool was really dirty. Yellow water and dead bugs floating around. The staff was really friendly and helpful.

Pictures at agoda.com where in no way representative of the actual hotel, booked a standard double room which was supposed to have a balcony, desk, free water (as in most hotels) and a city view. What I got was a tiny square room without windows and nothing but a bed. (Unless you call what was basically a hole in the ceiling a window..) Paid a bit extra for an airconditioned room and things worked out ok, still dont have a balcony but this is more like the room I booked and payed for in the first place. Except for the stained sheets. Decent location tho and the pool was nice. If you book an ac room in the first place you might have a more pleasant experience but the staff felt quite unprofessional .

The staff can speak Thai too, good service.

Fine for a budget stay”

Sheets and room was clean for us. Bathroom was not so clean and outdated. All together its cheap for a backpacker and still worth a stay.

You get what you paid for. Room is soso. Faucet in bathroom broken. Aircon keeps on dripping on top of the bed ans wets the bed and hit my head several times. Breakfast had no option which is only bread, egg and coffee.

Reviewed July 23, 2017
Did you find this review helpful?|
6.8
Good
Khiam from Malaysia
Family with young children
Stayed 4 nights in June 2016

plus: Free airport pickup, one way. Convenient location. minus: TV was not functioning.

i booked for 30 nights originally. Upon arrival, the receptionist did not seem competent, could not retrieve which kind of room i had reserved. After telling him, he did bring me to a shabby room, but airco was working and bathroom seemed ok except for the broken toilet seat. i went out for dinner and upon my return, i could not open my room anymore. then a manger came, a very rude man, who was trying to open the door. he told me to ho and sit outside in a kind of veranda and sleep. of course, i did not agree. his reply: I don't care. After about an hour he managed to open the door. so i could sleep. Next morning I should get another room. That was an even bigger disaster. The people who were in that room also were moved this morning from this room to another. i found quickly out: the water in sink did not run away! Again I ask for repair. Returning back to the hotel after a while, i found that the water in the sink now was draining, but by trying to repair this, they had broken the tubes bringing water to the room, water was running everywhere in the bathroom, creating loud noise. Again i ask reception to do something: their solution cut off the entire water supply for all rooms.... Even by doing this, a lot of noise kept coming from the water tubes.. it was night, time to sleep. Early morning the manager entered the room, while i was still sleeping, with a new set of tubes. Telling him that he at least give me time to dress myself and go from the room, again he told me: i do not care about you.... the new set of tubes was fixed, but clearly in an unprofessional way. there were still leakages and the water level in the bathroom remained continuously at about 1cm. So I decided to leave that hotel. There is no maintenance here, everything is old and many things are broken, there is no real room cleaning, all is in disorder. This combined with a rude manager who can only say : I do not care about you makes this place the worst one i have ever stayed. Several facili 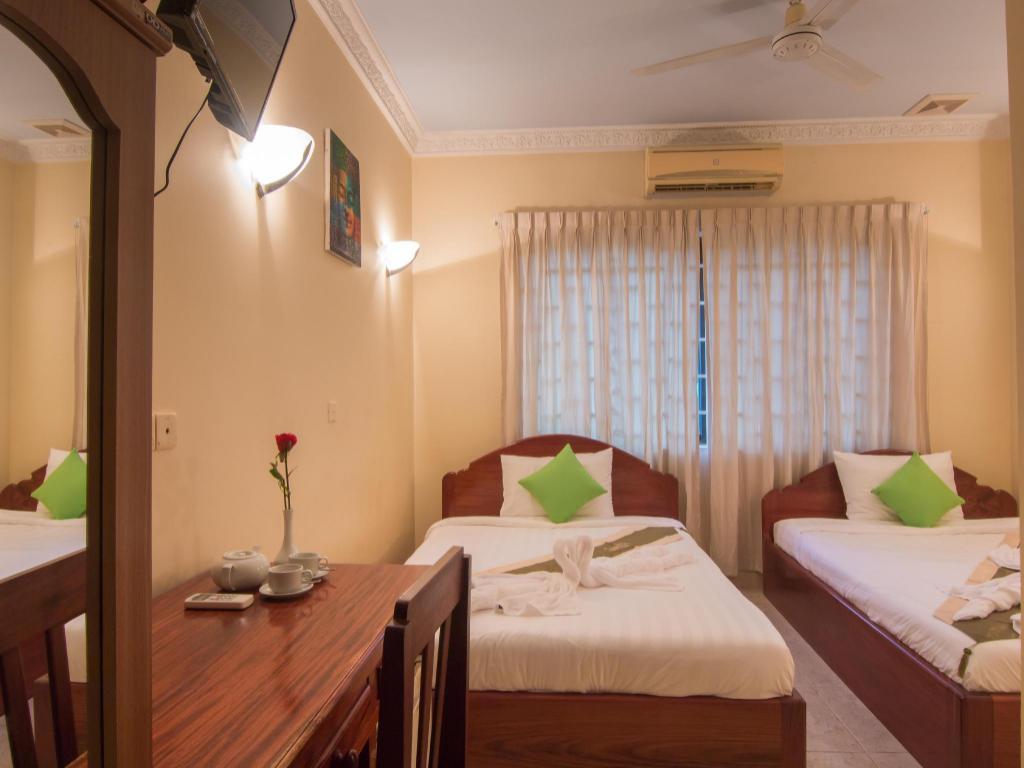 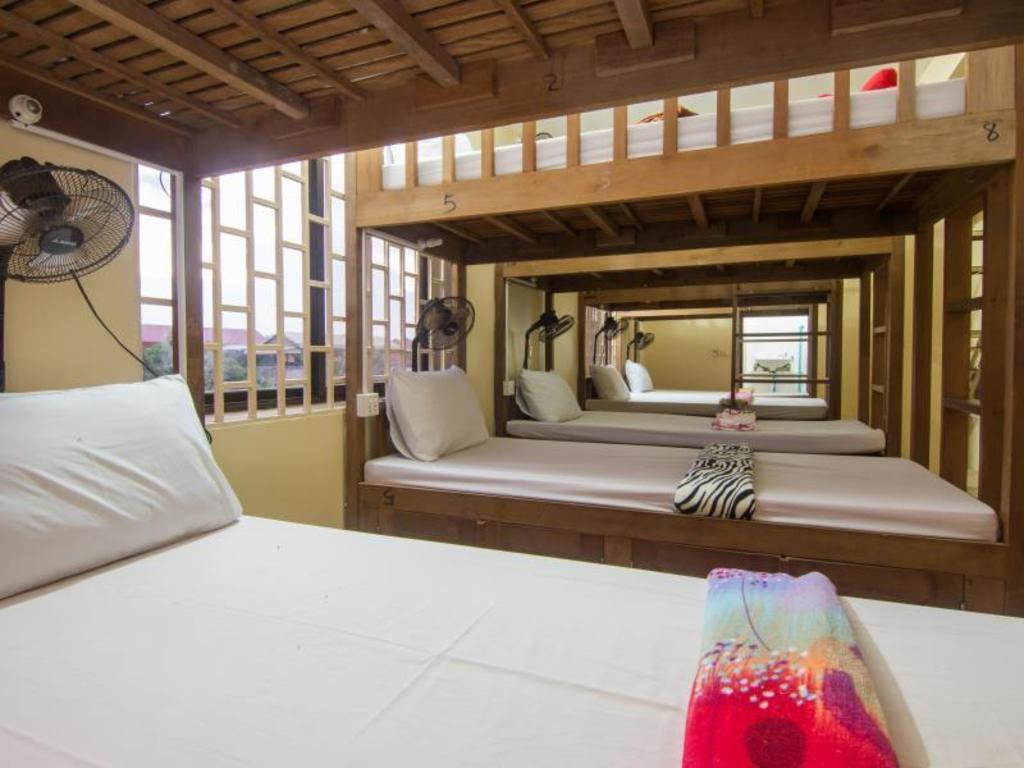