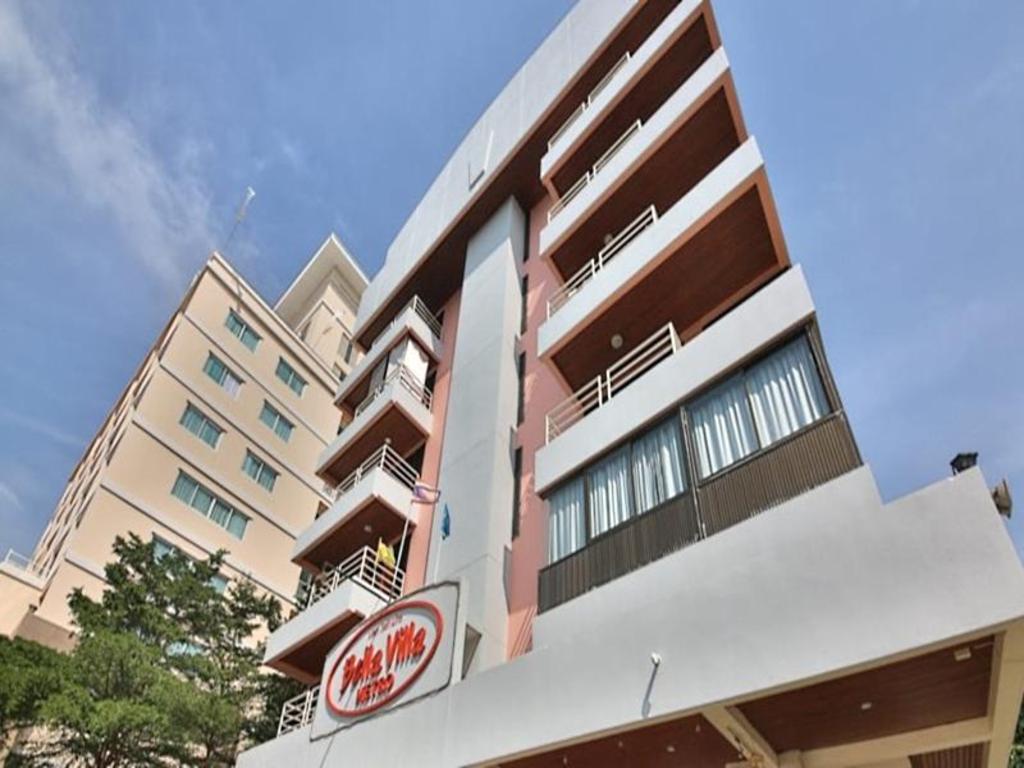 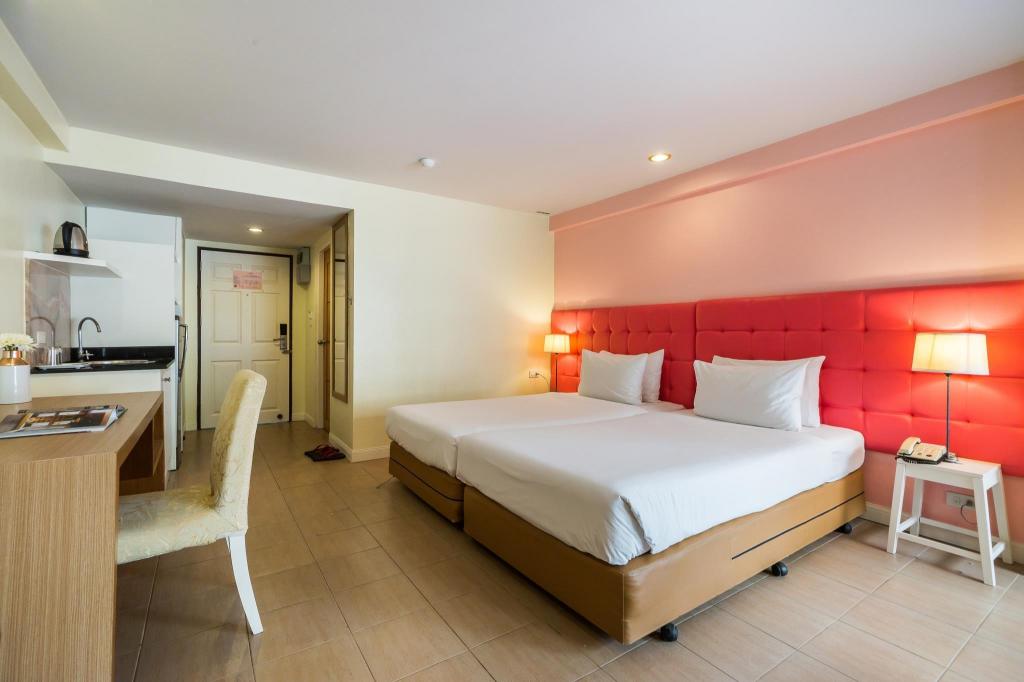 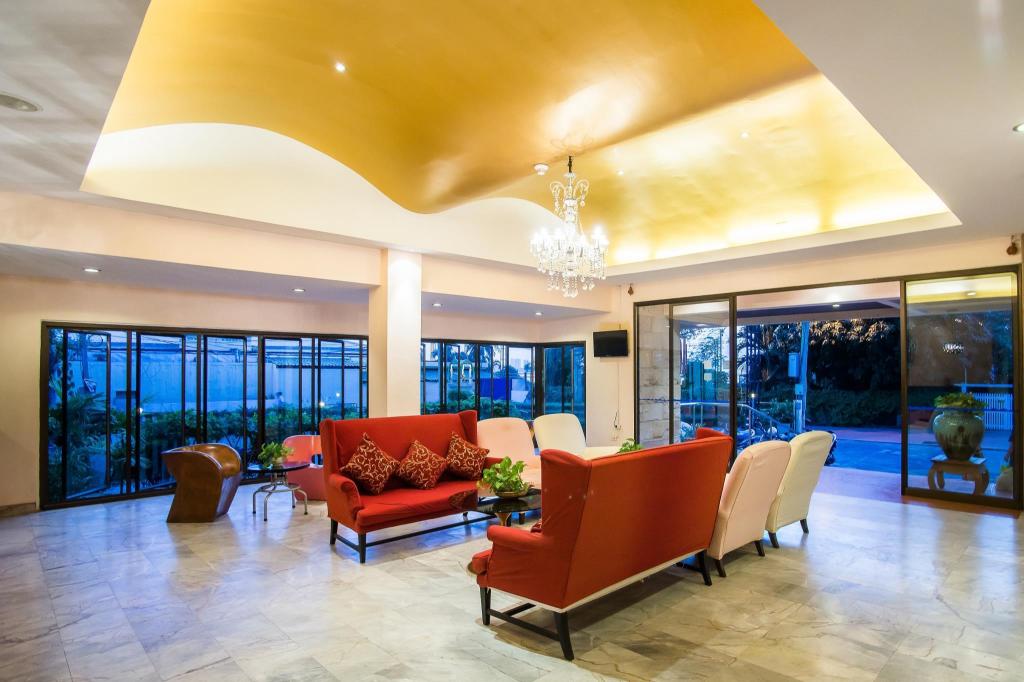 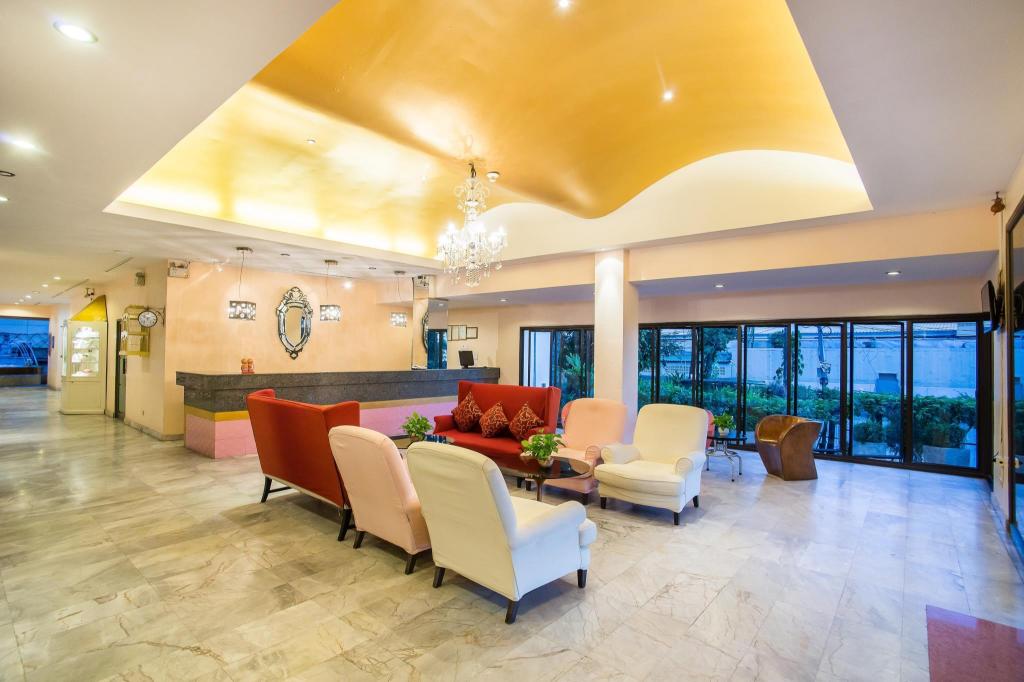 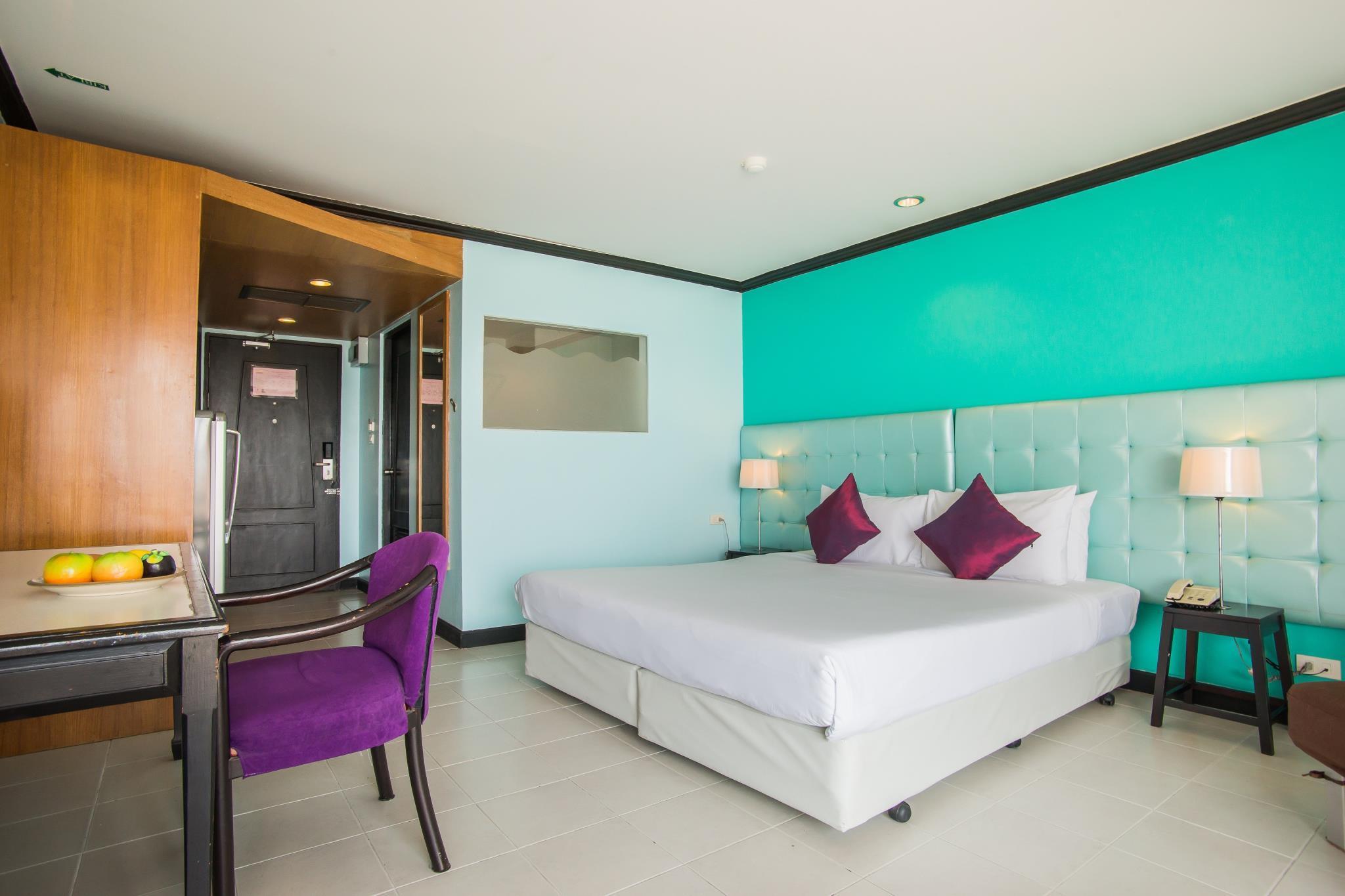 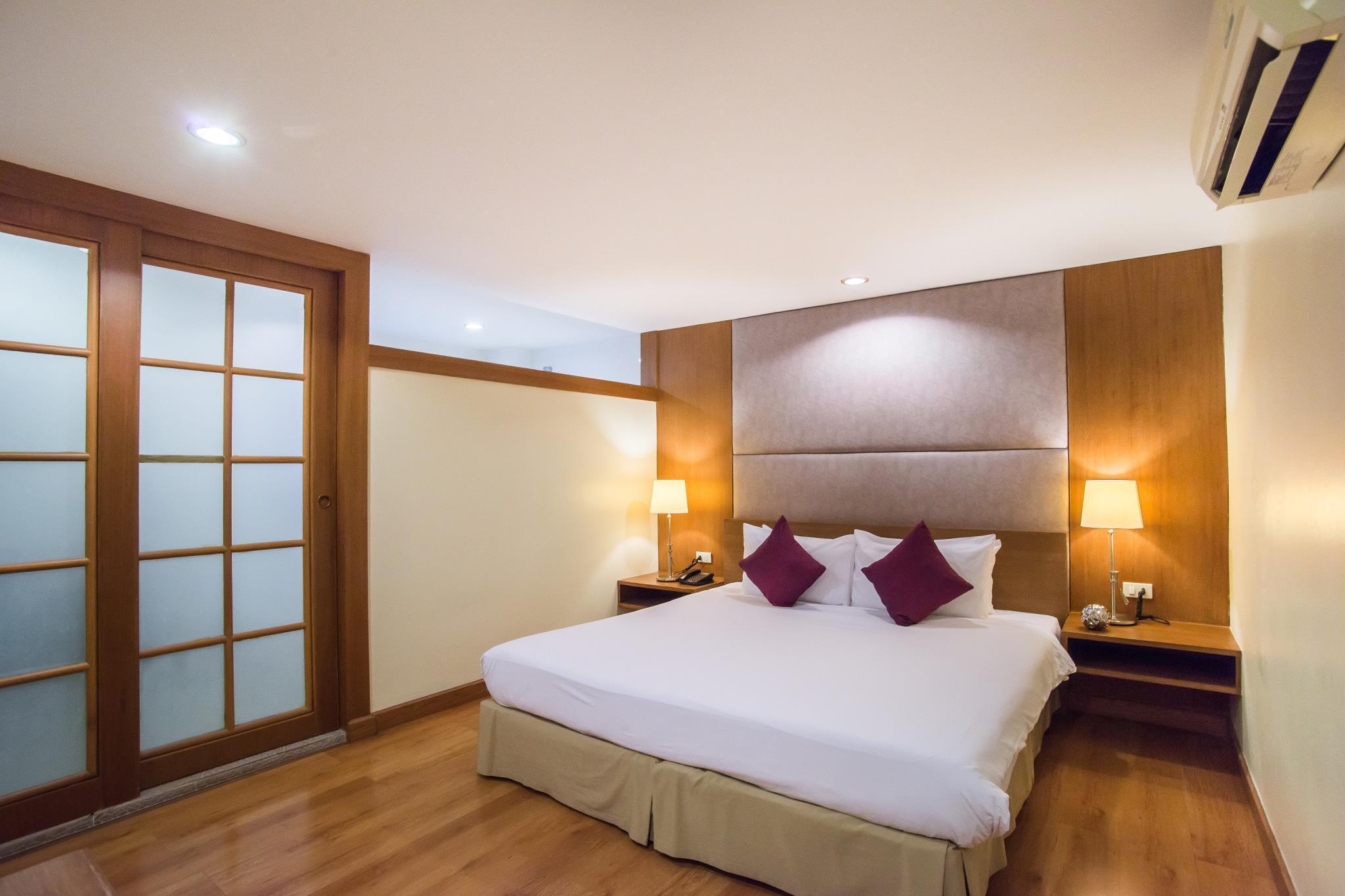 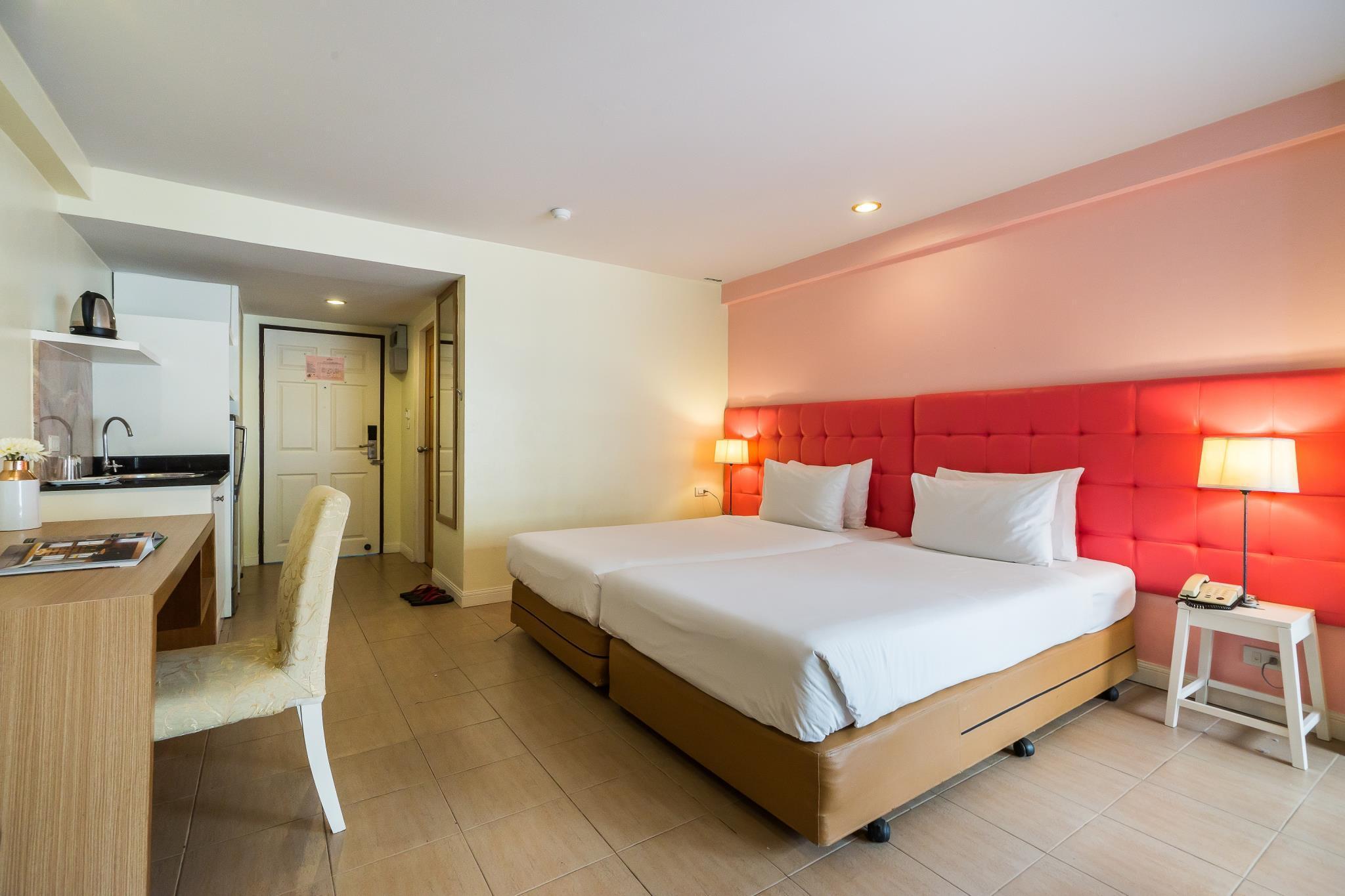 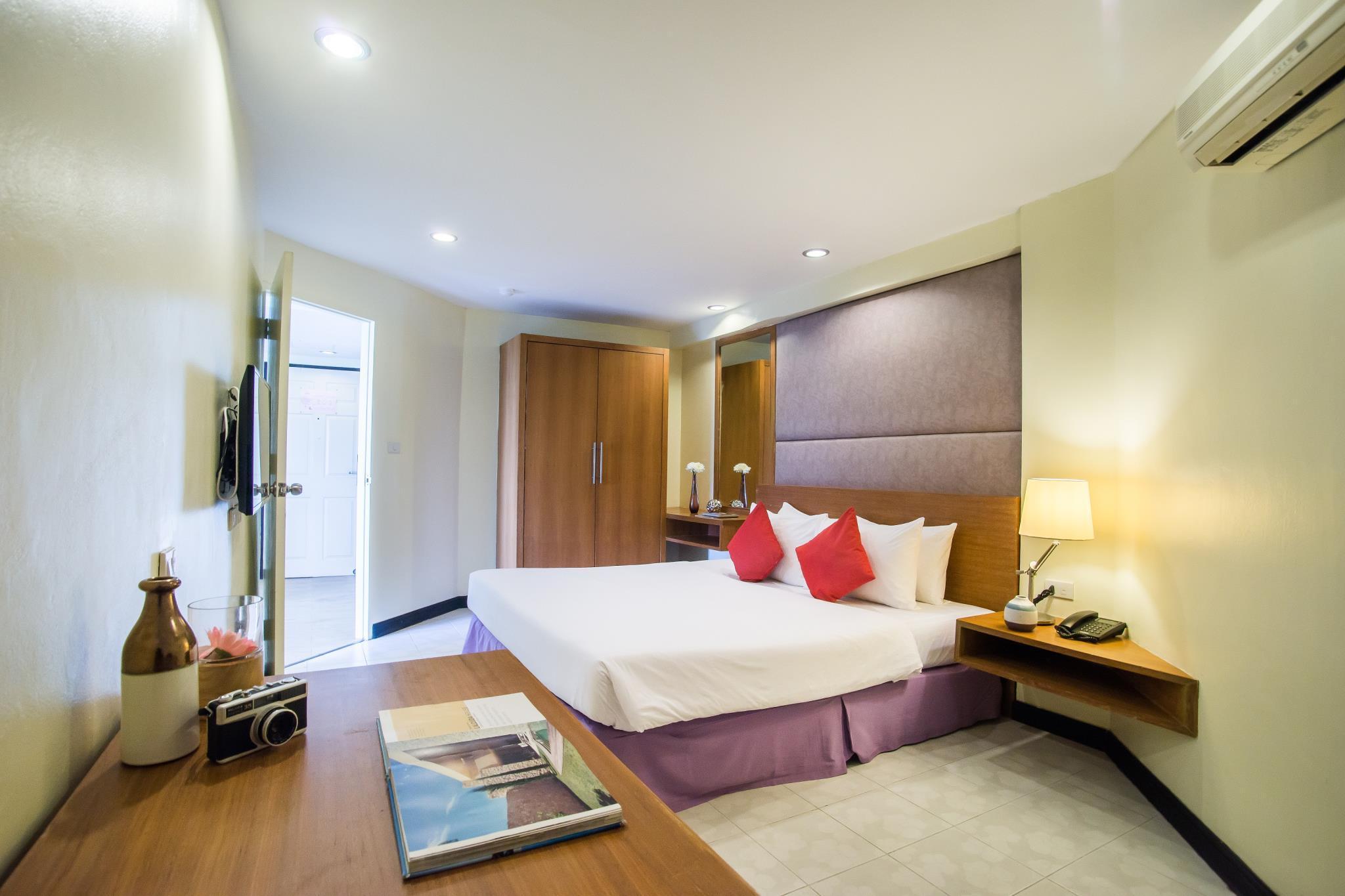 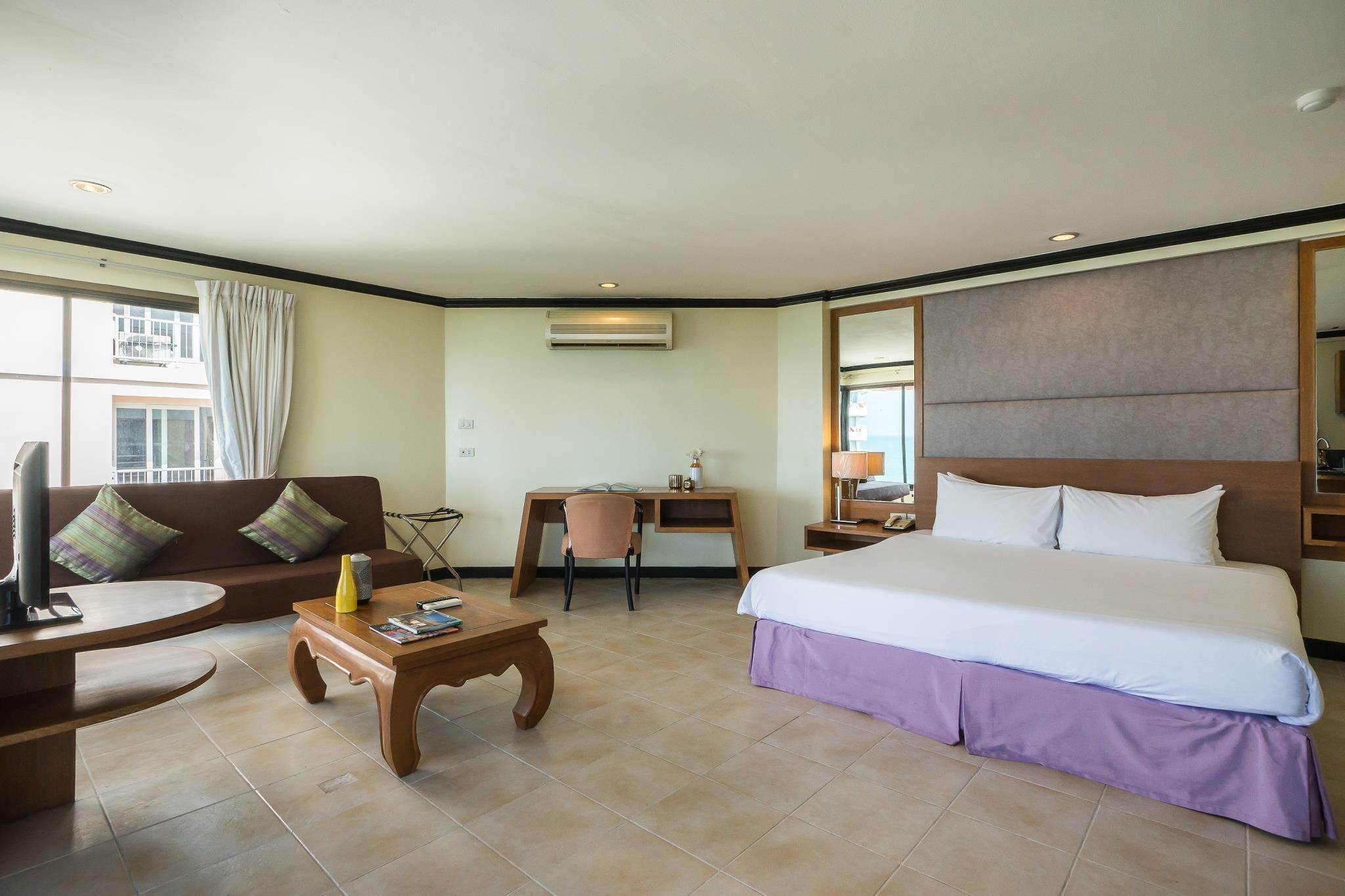 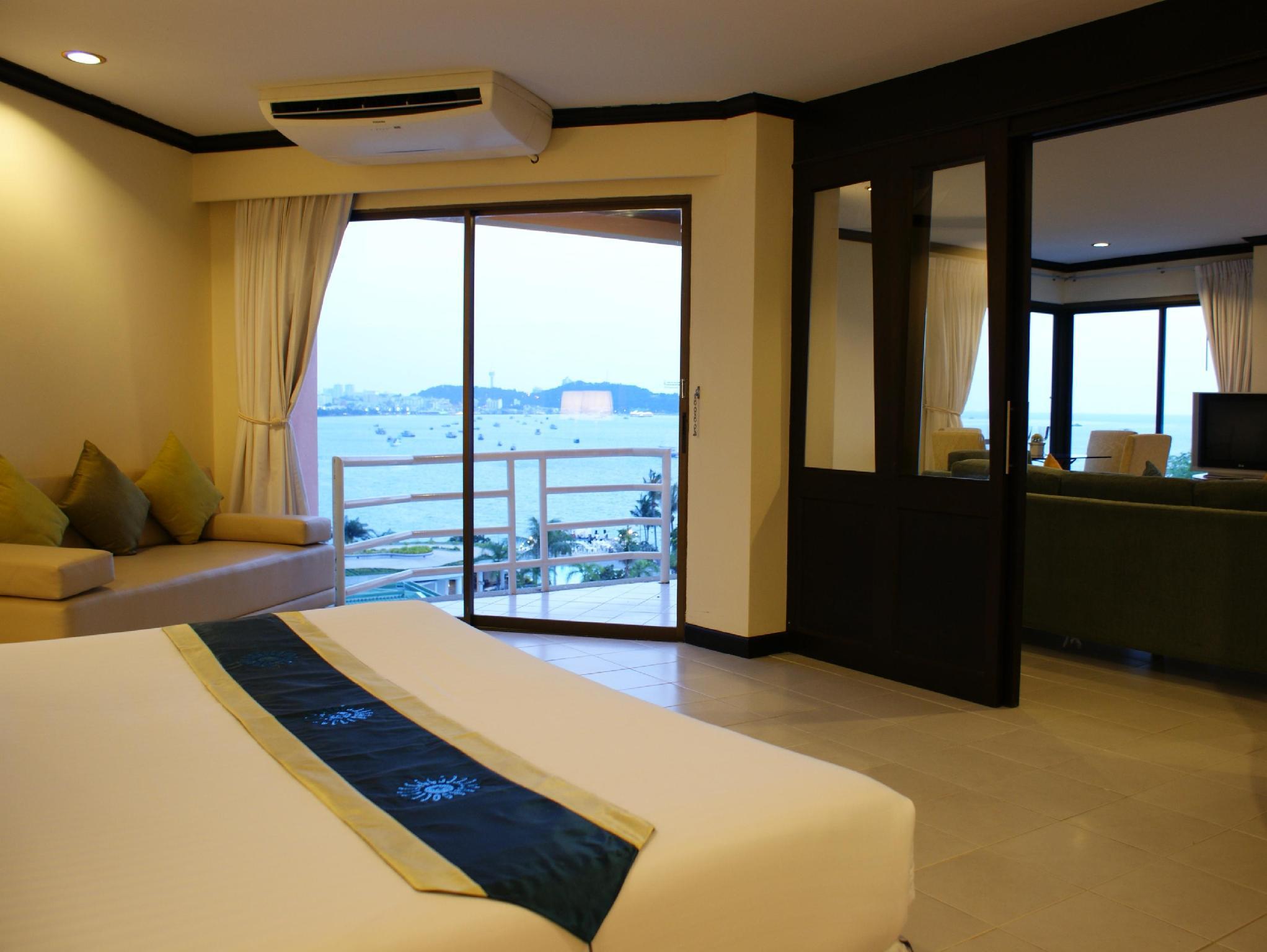 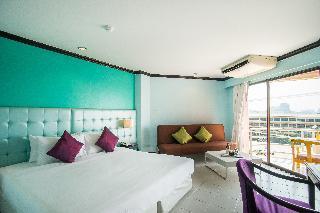 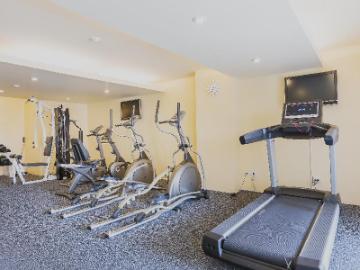 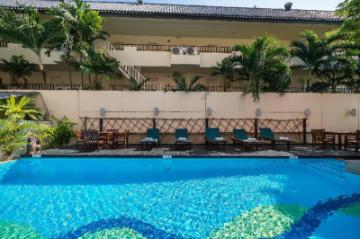 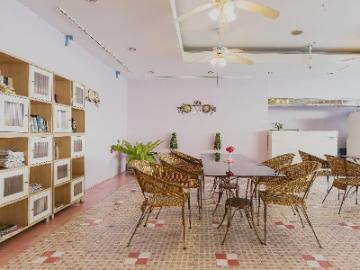 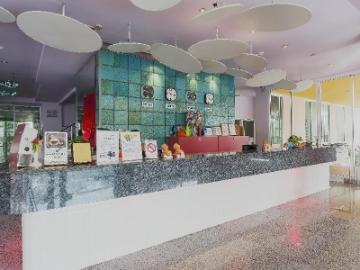 Dear Sven, First of all, we would like to thank you for taking the time to write a review about your stay with us. We are glad that you enjoyed your visit to Pattaya. I will make sure that your good words would reach to our team to motivate them more on giving good customer service. We hope to welcome you again on your next visit to Pattaya. Best regards, Srisuda M.

Room service is fast, professional and well done. Staff speaks English and easy to relate messages and exchange information. 90% of the cliets are Russian...If you are not Russian be ready to take the western quiz...do you like Poutin? What about Obama? On and on.

Professional Hotel within the great budget”

We arrived there at 1:30 pm and show the Agoda coupon, our standard room was not ready and the person who stay before us had a late check out. Instead of making us wait for it, they offered us the upgrade to family room. I was very impressed by their quick solving. The room is good compare to our money, just enough all we need. We will consider this place again for next Pattaya visit.

I've been to this hotel several times now. I like it. Best Western Hotel is next door and works under the same management, so breakfast for this hotel is actually over at Best Western. This time I got a sea view room furthest away from the elevator, which was actually really nice, because the room has two balconies. I'm (not) surprised that this website did not post my last review about this hotel and their messy cooperation with their next door neighbors because I didn't mark it as positive. You may have noticed that every feedback shows the green plus? That's because other customer feedback won't be posted here. Draw your own conclusions ... Let's see if this review makes it.

The hotel was fine as always performing at a four star level. I've been there around four or five times now because their performance is pretty solid. This time I was rather annoyed by two things. We stayed in room 1605 (sixth floor) The noise from the next room's aircon turbine was really big. And at the neighboring Dusit Thani there was some kind of boom boom party going on for one night. Thank God we had earplugs. Other than that everything was fine as always.

The ocean view room has a great view. The breakfast buffet is great, as is the location near the dolphin circle. You can walk down to the beach. There is also some parking available directly in front of the hotel, so you can keep an eye on your car. I've been to Pattaya several times and this is one of the hotels I have returned to. You get your money's worth.

only five minute walk down to the beach

The Bella Villa Metro is a nice hotel. There are several Bella Villas in Pattaya, but this one seems to be in a better location than the other once. It's away from the busy streets, so you don't get any traffic noise. The rooms are comfortable. For 1500 THB you also get a big breakfast for you and your partner. Recommended for anyone who is very hungry in the morning :P

The Metro Bella Villa is a good choice for one to three nights. The beach is close, the dolphin circle too, so it's easy to get to town but songtaew. I have come back to this hotel because you get good value for your money at 1500 THB. The view is great for that price too. Some of the tourists in the hotel can be annoying...some doors are quite noisy when they're shut, other than that...i can recommend it.

Excellent hotel ambience, great food and courteous staff. Rooms are really big, clean. Sea view is the best from this location. Dont worry for saving some money, take a sea view room and just enjoy the stay. Trust the evenings looking at the sea is just awsome. Real romantic !!

It's full of character and in fact, much bigger than we were expecting from the photos. Though it was in a lovely location but that made it such salient feature of the hotel. Just a little away from the noise. Great Hotel

Center of the town and easy to reach. Good facilities with swimming pool, sauna, fitness center.
The elevator is quite small. Swimming pool close so early.

The overall hotel is great. It sit in the middle of the town but able give a private area to us. Room condition is pretty good and clean. Food is also good with many type is food to be selected. Some glitches is about the elevator which quite small and cannot support many people. Also swimming pool is great. Not much Chlorine that makes me acrid. However, the closing time is quite fast (9 PM) and the time prolong has charges.

200 meters away from Nakluea Dolphins, close to the beach (actually 4 minutes walk to beach). No street in front of hotels, very small traffic. Rooms clean, fully furnished with refrigerator, safety box, teapot. Mini-Bar prices reasonable. I visited my friends and choose this hotel again. Breakfast served in Best Western hotel, just next door from this hotel. Not so much people, hotel recently renovated.

Quiet corner, 3 mins to the sea, but also 3 mins walk to Dolphins circle, where you may have a lunch or go to around the city.
none

Hotel is perfect place in North Pattaya for anyone who want to stay in Pattaya but away from nightlife. Good place to sleep. Sea is 3 mins away from hotel, walk to the right then left and down the stairs to the beach. Stairs wide and not so long. Beach is small but enough to lay under the sun or swim.

Hotel located in Nakluea, away from nightlife area. Close to the sea, 5 min walk to main street "Dolfins circle". Nothing special, good room, inexpensive minibar (was surprise), breakfast served in Best Western Hotel, which is next door from Bella Villa. Hotel provide minimap with location and address in Thai for mototaxi or taxi.

Great service and value for money.”

Room was clean and large. The staff were also nice and kind. The location is little bit far from main road, but they had transportation service to the main road by electric car. Very nice hotel.

Dear Sir, First of all, we would like to thank you for taking the time to write a review about your stay with us. We are glad that you enjoyed your visit to Pattaya. I will make sure that your good words would reach to our team to motivate them more on giving good customer service. We hope to welcome you again on your next visit to Pattaya. Best regards, Sadanan M.

This hotel is worth to its price, no bell service we must bring our own luggages up to the rooms. It's 3 star hotel with good location, but the breakfast is quite good at Bella Villa hotel next to this hotel.

This hotel is quite near to Pattaya beach and center of Pattaya city. The room is comfortable worth to its price, good breakfast, but no staff service and the bed is a little hard. For overal, it's worth to 3 star price.

I chose to stay at this hotel, because of the location to the Sanctuary of Truth Temple, and also because i have stayed in Belle Villa Hotels before. First of all, myself and the Taxi driver could not get to the hotel because of the work being done by the electricity people, who had shut off the only two roads to the hotel. Huge trees had been taken down By two enormous 38 ton, 16 wheel cranes, and dumped in the road before being cut up, so the only way to gain access to the hotel, was to chat to the local police to let me in. Now to my way of thinking, this sort of operation, does not happen overnight, especially the use of two huge cranes to remove trees, this sort of stuff takes advance planning, so when i booked the hotel about 3 weeks before i got there, why was'nt i, or other people, told of this ?, plus, the local taxi drivers knew of this, and were trying to charge people well over the odds to take a 2 km journey around the obstruction, and charging 100 Baht per person. Now the Bella Villa Metro, has another hotel next door to it, the Best Bella Pattaya, which is where you have to check in ???????? , in fact everything that you need to happen at the Bella Villa Metro, has to be done at the Best Bella Pattaya, check in, check out, take your breakfast there, because at the villa Metro, there is no front of hotel staff !, the place was like a graveyard, although there were offices being used in the metro, there was no communication to people using the hotel, other than bits of paper stuck to the wall of the lift !. I booked a superior room, HA !, more like a closet, it was clean, and thats about it. The corn flakes at breakfast were ok. The guy on the door who took your room number to make sure you were not up to no good, was only interested in his mobile phone, and paid scant regard to anyone really !. I propose, that the two 38 ton cranes return to the Belle Villa Metro, and take it down piece by piece...or perhaps that's the plan anyway, because as a hol

Just stay at their main location next door...”

The Bella Villa Metro is fine for single travelers, however, it's lacking in a lot of basic things. For example, there is no reception staff on hand at this location and you need to walk to their neighbor location for anything you need. This also means that the phone in your room will not connect to any office or reception and (again) you need to go next door. Need pool towels? Same thing... walk next door. These complaints might go unnoticed, but it made staying there with my wife and son a bit annoying. The location is walking distance to a nice private beach though! It's very rocky though so be careful and again... just book next door instead.

Bella Villa Metro is a good hotel with nice rooms, nice pool and very nice staff. It's a little walk to it but they have a phone at the top of the road where you can call for a pick-up. The beach isn't the best but nowhere in Pattaya has nice beaches so it's as good as you'll get. 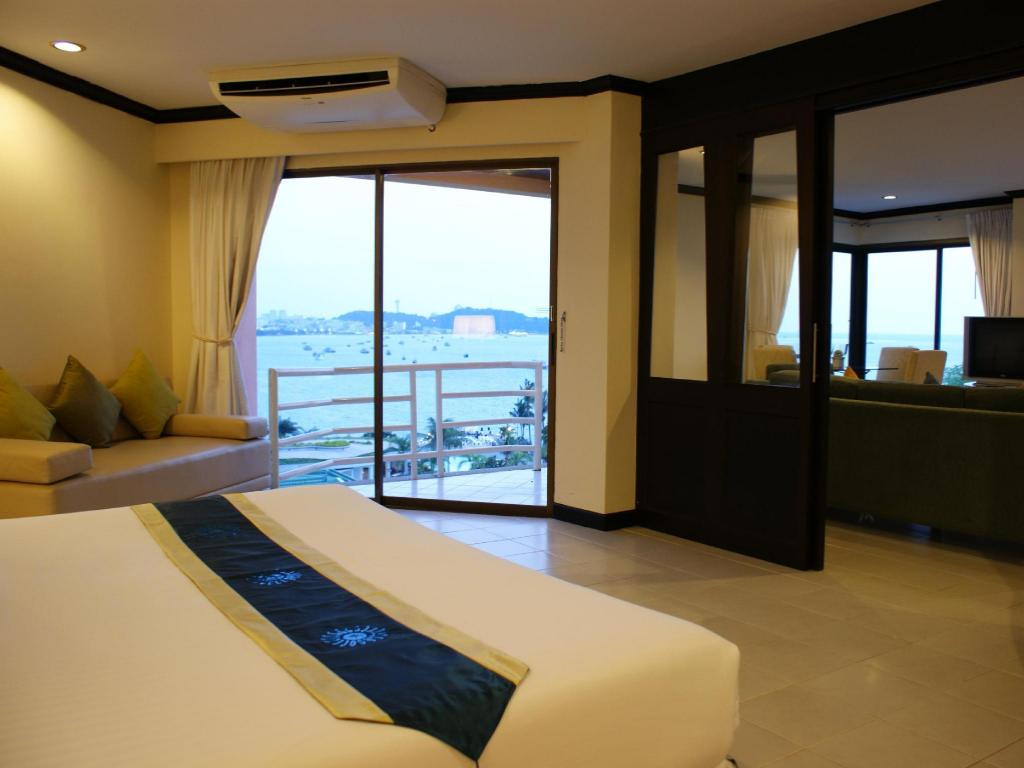