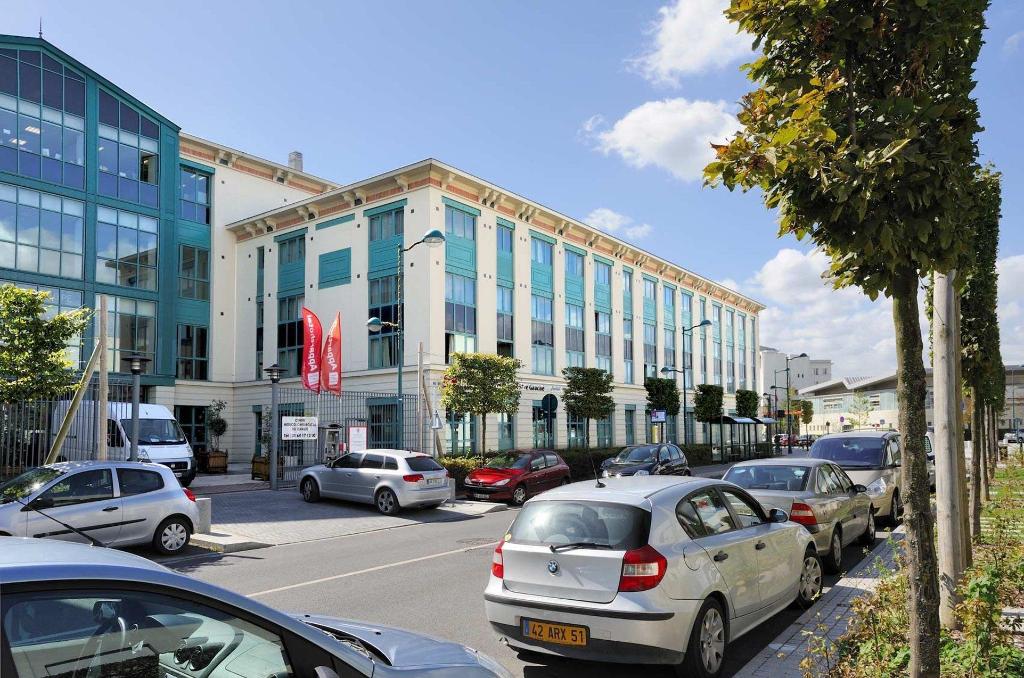 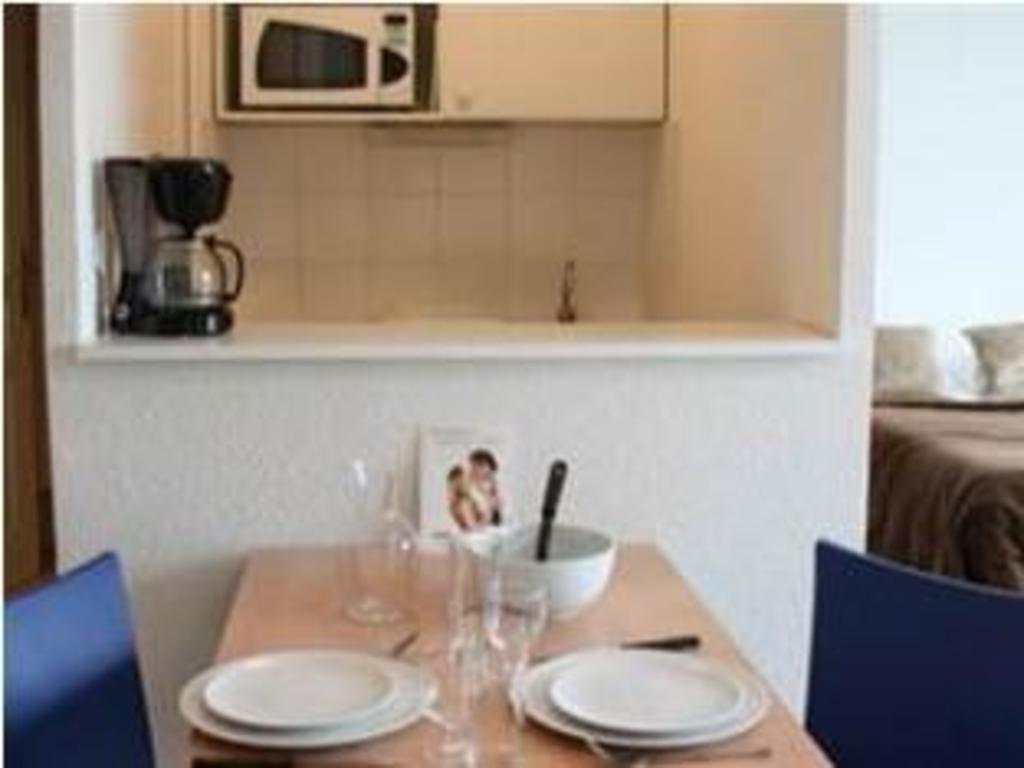 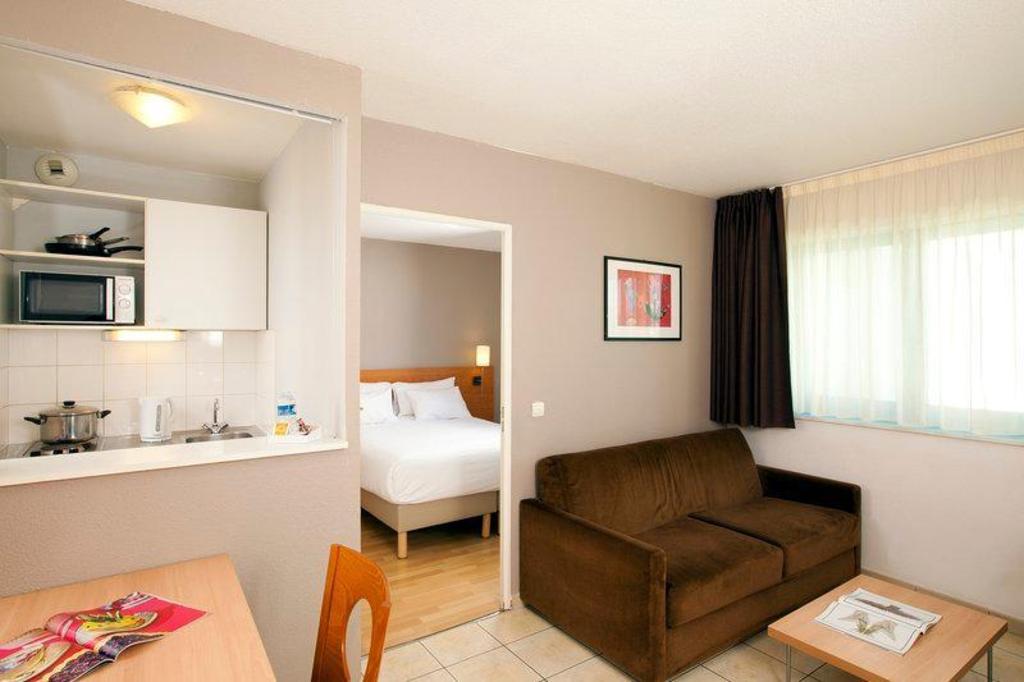 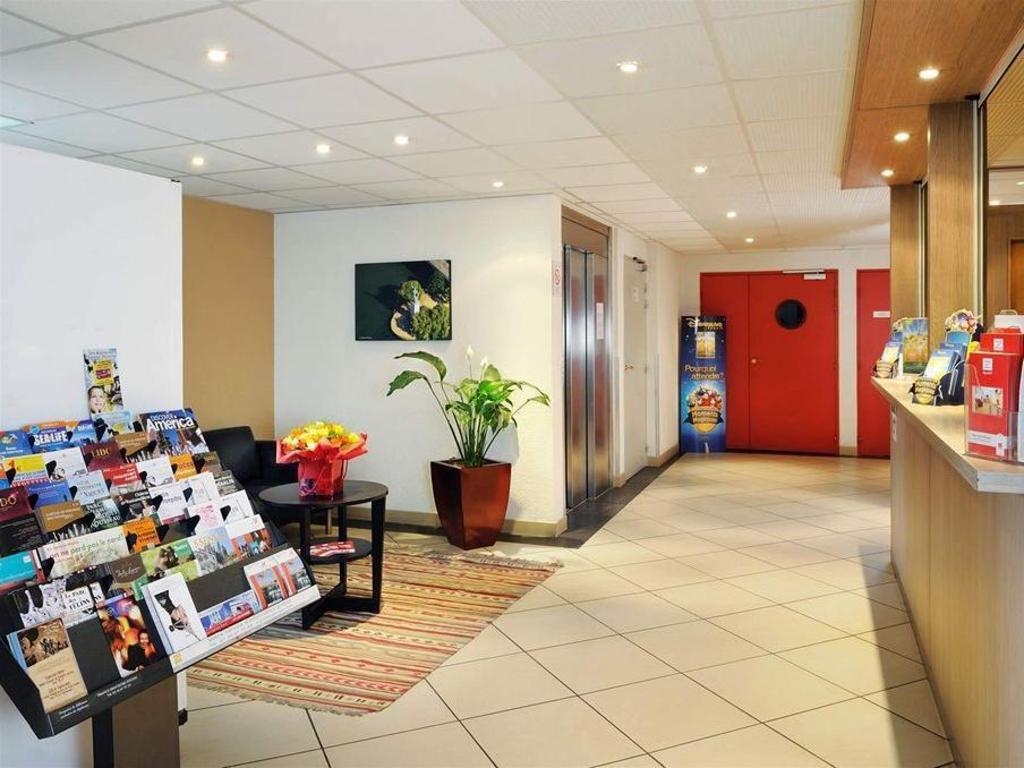 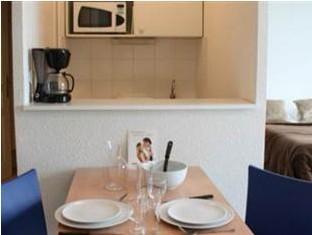 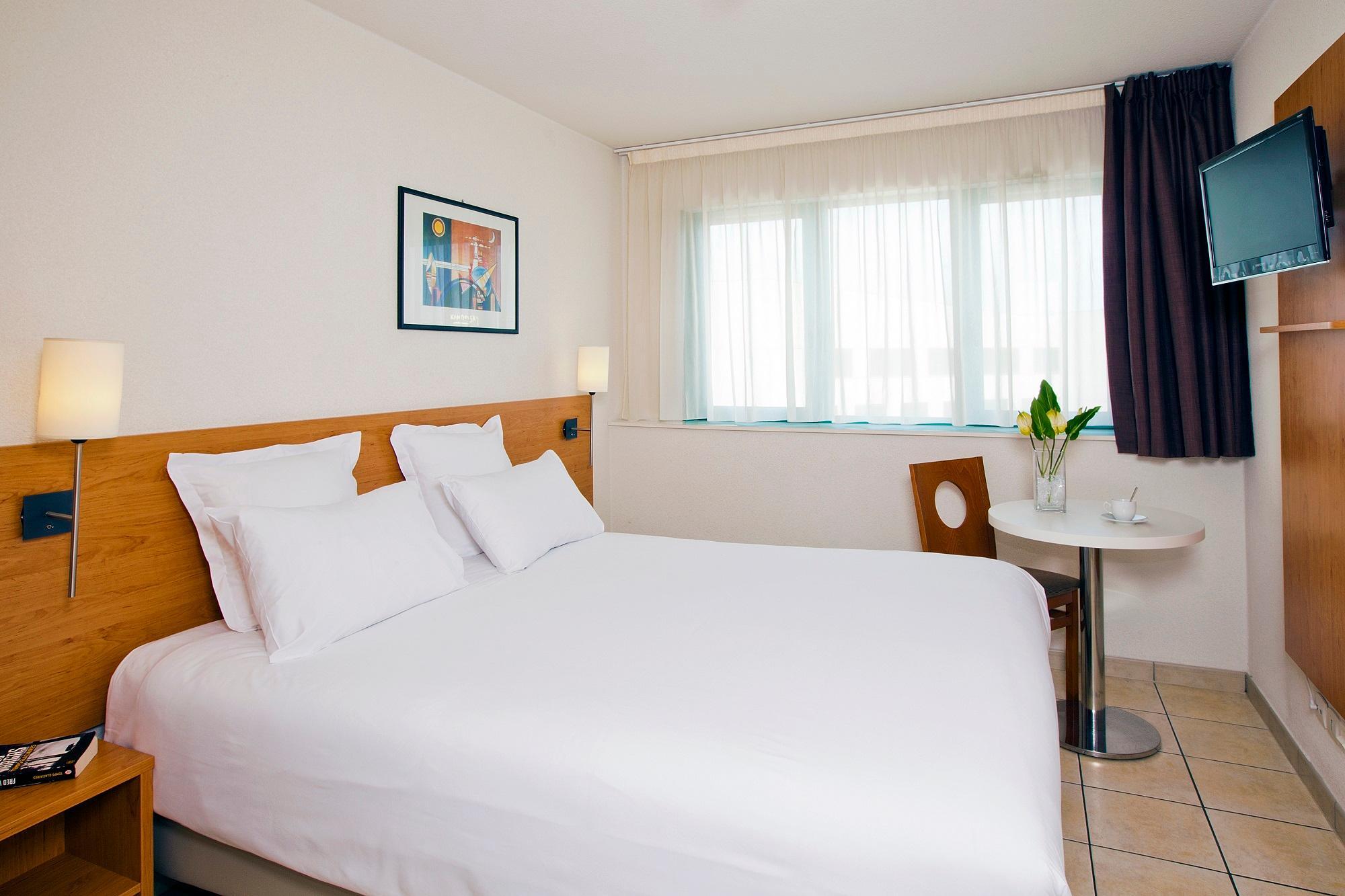 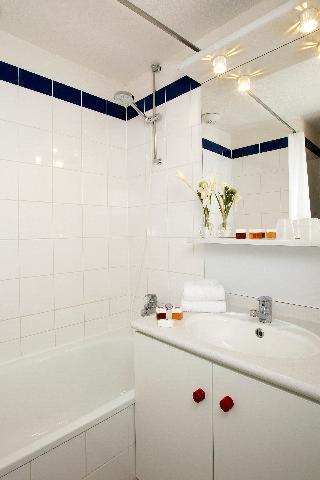 Lovely hotel and service with a smile”

This apartment is self check-in at night and only one train stop away from Euro Disney, making it affordable. It's a 5 minute walk from the train station, it's spacious with a separate bedroom, clean bathroom and kitchen with a large lounge. We were lucky enough to get a massive wrap around balcony as we were on the bottom floor and it was amazing. I would definitely stay here again

Advantages: 1) Location: We booked this place as we wanted a location close to Disneyland Paris but with a reasonable price. This hotel is about 5 - 10mins walk from Val D' Europe train station (you can go to Disneyland from this station; only 1 stop away. Disneyland station is called: Marne - la - vallee Chessy..ticket is around 1.90 euro/2 euro per trip). The hotel is also about 5 mins walk to the shopping mall Val D' Europe and also the fashion outlet (La Vallee Village) with designer goods. 2) Room: the room was spacious than i thought. Love how there was a small kitchenette in it. 3) Services: the receptionist was friendly, helpful and informative. They provide luggage storage services for free too. Breakfast was the usual pastries, cereals and toasts. Simple but sufficient. I would truly return back to this hotel if i were to visit Disneyland again.

This is suitable place if you visit Disneyland, Paris. The apartment was clean and spacious ”

This is suitable place if you visit Disneyland, Paris. The apartment was clean and spacious for 2 adults and 2 children. With a small kitchen with cooking utensils, you can cook yourself. Very next door, you have shopping mall

The room is big, wifi connection is strong, service is good, location is near the train station. Overall it was a wonderful stay as it is a studio apartment. However there is no soap to wash the dishes. Besides that, everything was perfect! :)

Price, near to station, apartment with cooking facilities

We arrived at 9 when the reception was closed and there is a machine to register and get the keys! The floor was not clean but the room came with slippers. The water was not consumable even when boiled due to the taste. But the area was great and near the train station which is a 3 minute ride to disney.

Service apartment near to Disneyland”

Room with kitchen, near to Disneyland, and shopping centre

Nice hotel. However, the reception is operating till 8pm only. To access hotel after 8pm, you have to use your room card to unlock the main door. The good point of the hotel is near Disneyland, it is about 10min walk to RER station and RER ticket to Disneyland is euro1.30. The room has kitchen equipped with microwave where you can buy foods from supermarket at the shopping centre which is near to the hotel (about five minutes walk).

Welcome by staff on arrival was very good. Rooms good value for money & clean. Kitchenette was a huge bonus to make breakfast & snacks. Location fab (one stop on rer tube from Disney ), only a few minutes from train stop (turn right out of station then left go to top of street & its on your right) Val d'europe shopping centre has everything you need

Great value for money - very close to Disney on Train”

We travelled as a family of 7. All adults ranging from 19 to 79 years of age, We had 3 apartments, 2 studios and 1 room with bedroom and sofa bed. All rooms were basic, but clean, with facilities to make yourself breakfast if you wanted (kettle, small hob, fridge). The hotel is about 5 minutes walk from the Val D'Europe station, and it is a 5 minute ride to Disneyland Paris. The trains run regularly. The reception staff were very helpful, looking after our bags both on our early arrival and following check out so we could spend some more time at the parks before heading to the airport in the evening. They also arranged and negotiated for our return taxi which was prompt. It is quite a way from Charles De Gaulle airport, so, unless you're happy to travel into Paris and back out on the train, you may need a taxi. Alternatively, you could take the Disney shuttle (bus) to Disney then get the train. The shuttle is 20 Euros each and a one-way ticket to Val D'Europe is 1.90 Euro. It was cheaper, though for us to get a 7 seater taxi, which cost us 100 Euros including the tip. If you don't want to eat in Disney (due to the cost) there are loads of places to eat in the Shopping Centre which is very close to the station. I wish we had done this, although we wanted to see the light show at Disney so it would have been a bit inconvenient. The food hall is at the end of the shopping mall, which is very good if you fancy some non-Disney retail therapy. There is also a pub directly opposite the station which is about 50% of the cost of the bars on Disney. We also spent a day in Paris, but it is a long train journey (maybe an hour?), to the Arc de Triomphe, as you are vitually at the end of the line. A day ticket for the train is also expensive (25 Euro) TIPS: You can only buy a one-way ticket for the train and you need your ticket both ends. Tickets can be bought from machines or humans in the stations. The reception at the hotel is closed, I'm guessing from around 22:00 u

Not a great stay”

Hotel location, staffs were responsive and near Disney land 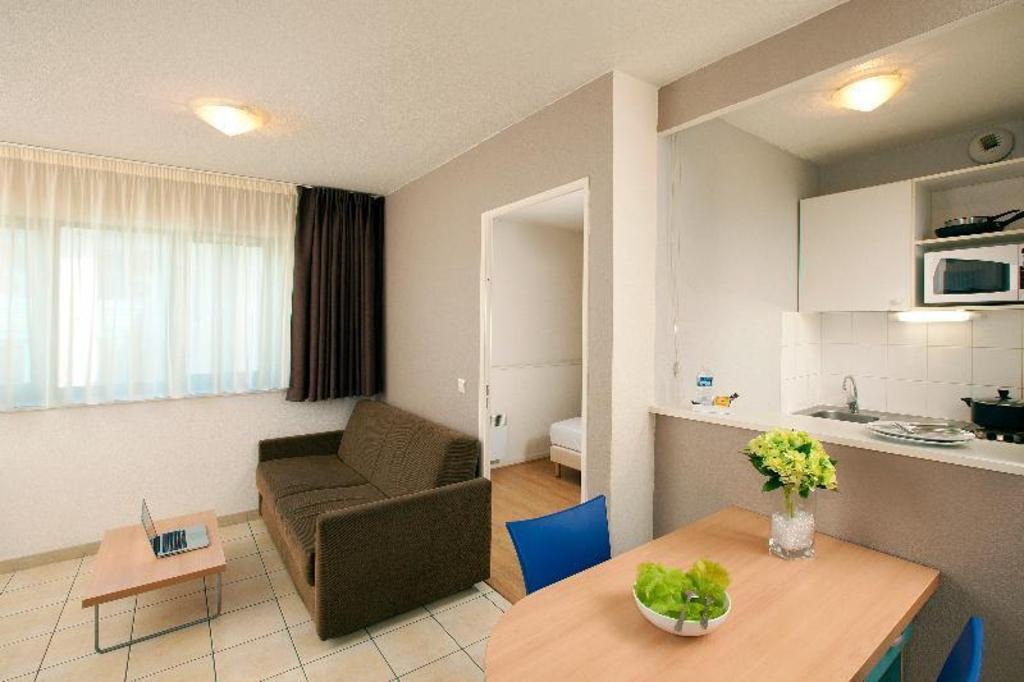