No trip to Taiwan is complete without a visit to one of the country’s famous night markets, and none come as highly recommended as Shilin Night Market in Taipei. Located in the Shilin District, it is the largest and most well-known night market in the city. Here, you’ll find delicious Taiwanese street food and unique merchandise. Shilin Market‘s size, scope, history, and enduring popularity as a nightlife hotspot make it a must-see attraction to add to any Taipei itinerary.

An introduction to SHILIN NIGHT MARKET

Shilin Night Market is a maze of sprawling alleyways packed with all manner of food and merchandise vendors. It offers endless opportunities to eat, shop, or even to just browse around and enjoy the bustling atmosphere. There are always many tourists at Shilin Night Market, but you’ll also see plenty of locals doing their weekly shopping. Be ready to bargain for some great deals and make sure you wear shoes that you can comfortably walk around in, as the market covers a large area. You’ll find mouth-watering Taiwanese street food around every corner and tons of cheap clothing and accessories to spruce up your wardrobe.

Today, Shilin Night Market stands at what was once the location of a Keelung River wharf. Produce from farms around the Shilin area would be sold at the wharf for shipment to other ports along the river. A daytime market was established here in 1909 and the night market was officially established over a century ago in 1913. This brought many new businesses, vendors, and customers to the area. Shilin Night Market quickly grew into the largest and busiest night market in Taipei. It continued to be housed in its original building all the way until 2002, when the structure needed to be demolished. Vendors moved into temporary structures while the market was rebuilt. Finally, in 2012, the brand new Shilin Market building was opened.

Shilin Night Market is divided into two main areas: the new market building and the vendors and businesses that have sprung up around it. The Shilin Market building consists of one floor above ground and three basement levels, two of which are parking for visitors who choose to arrive by car. The main floor is where you’ll find all manner of fresh produce as well as merchandise such as clothing, accessories, and souvenirs. One floor down is the world-famous food court. There is no better place to find such an array of traditional Taiwanese dishes and street food. Visitors are spoiled for choice by the over 500 food stalls set up on this floor. Once you’ve had your fill, you can head out to the merchandise vendors that have set up shop around Chi Cheng Temple and Yangming Theater. Shop here for bargains on clothes, hair products, electronics, hats, shoes, accessories, and more. Shilin Market is open late every evening of the week and easily accessible from all over the city. If a trip to the market is part of your travel plans (as it should be), then here’s what you need to know before visiting.

Address and how to get there

It occupies almost an entire neighborhood and its boundaries are marked by Dadong Road, Danan Road, Wenlin Road, and Jihua Road.

Shilin Night Market can be easily reached via the Taipei Metro System, which has greatly increased tourist traffic to the market over the last several years. It is just a short walk from Exit 1 of Jiantan Station, which is on the Tamsui-Xinyi Line.

Most vendors at Shilin Night Market begin opening their stalls between 4 p.m. to 5 p.m. Activity tends to wind down around midnight and, by 1 a.m., most stalls have closed.

As visitors usually come to the market for dinner or for an after-dinner snack, the busiest time at Shilin Night Market is around 7 p.m. and 8 p.m., though there is still plenty to see and buy into the late evening. The sheer size of the market is hard to comprehend before getting there, so make sure you have the time and the energy to explore it fully. If you’re looking to try the most unique and popular dishes, then it is recommended you arrive earlier. What to eat at SHILIN NIGHT MARKET

Taipei is the street food capital of the world, and Shilin Night Market is one of the best places to sample what the city has to offer. When you first enter the market, however, it’s easy to get overwhelmed by the vast array of food choices available and not know where to start. Here are some suggestions for the best and must-try foods and drinks at Shilin Night Market.

• Pork paper: The ultimate snack food, pork paper is exactly what it sounds like – paper-thin pork cut into rectangles, toasted, and seasoned. The balance of flavor and texture makes the pork paper super satisfying and very addictive, and it is all too easy to eat your way through a whole serving without even noticing.

• Fried chicken fillets: A growing favorite at Asian night markets all around the world, fried chicken fillets are a true Taiwanese specialty. An entire chicken cutlet is fried to absolute perfection, then sprinkled with a flavoring powder and typically served whole in a bag. The outside is fried until golden brown and the meat is juicy and tender.

• Sweet potato balls: A quintessential street snack, sweet potato balls are double-fried balls of sweet potato that you can sprinkle with plum powder for extra deliciousness. This portable little snack is light and airy on the inside with a satisfyingly crunchy exterior. It’s sure to become one of your favorites.

• Fried oyster omelet: A staple at Taiwanese night markets, fried oyster omelets are made with eggs, veggies, and a good helping of small oysters. Starch is used to give the batter a thick consistency and the omelet is slathered in a savory sauce.

• Sticky rice sausage rolls: Often known as “small sausage in large sausage,” this dish consists of a sweet and savory pork sausage wrapped in sweet and sticky glutinous rice that has been blended with fried mushroom and pork lard. The combo is then chargrilled and served up with a garlic sauce.

• Stinky tofu: Only for the most adventurous of foodies, stinky tofu lives up to its unflattering name. It is fermented tofu that is then either fried or boiled and eaten with chili sauce. If you’re brave enough to get past the smell, you might just find you really enjoy the taste. Consider trying stinky tofu fries for your first time eating this Taiwanese favorite.

• Bubble tea: There’s no better way to wash down all of the fried and salty snack foods than with the market’s famous bubble tea. This cold, tea-based drink often mixed with milk and filled with chewy jellies or tapioca pearls is sweet, refreshing, and delicious. You haven’t had bubble tea until you’ve had it here.

• Lemon aiyu jelly juice: Another drink that you have to try at the market, lemon aiyu jelly juice is refreshingly cold with just the right amount of sweetness. Aiyu jelly is made out of the seeds of a type of fig and served with lemon juice and honey to enhance the flavors.

• Deep fried fish balls: If you’re a fan of fish balls, then don’t miss the chance to try the freshly fried fish balls available at the market. Served hot on a skewer, the fish balls have a spongy texture and a salty flavor perfect for balancing out all of the other savory snacks you’ve enjoyed.

• Deep fried milk: This delectable snack may look like fish balls at first glance but it’s actually skewered balls of milk that have been fried in a crispy batter. Under the crispy shell is a rich, melt-in-your-mouth core. The contrasting textures and sweet taste make this one snack you don’t want to pass up.

• Flame grilled beef cubes: Served while still sizzling, these diced cubes of beef are grilled right before your eyes until they are juicy and tender. You can choose various flavorings to go with them, such as teriyaki sauce, pepper, or chili powder.

• Pepper pork bun: You absolutely must leave room for one of the market’s famous mouth-watering pepper pork buns. They are made out of rounds of dough that have been stuffed with green onion, pepper, and minced, marinated pork, then coated with sesame seeds and baked in a barrel oven for a crispy exterior. 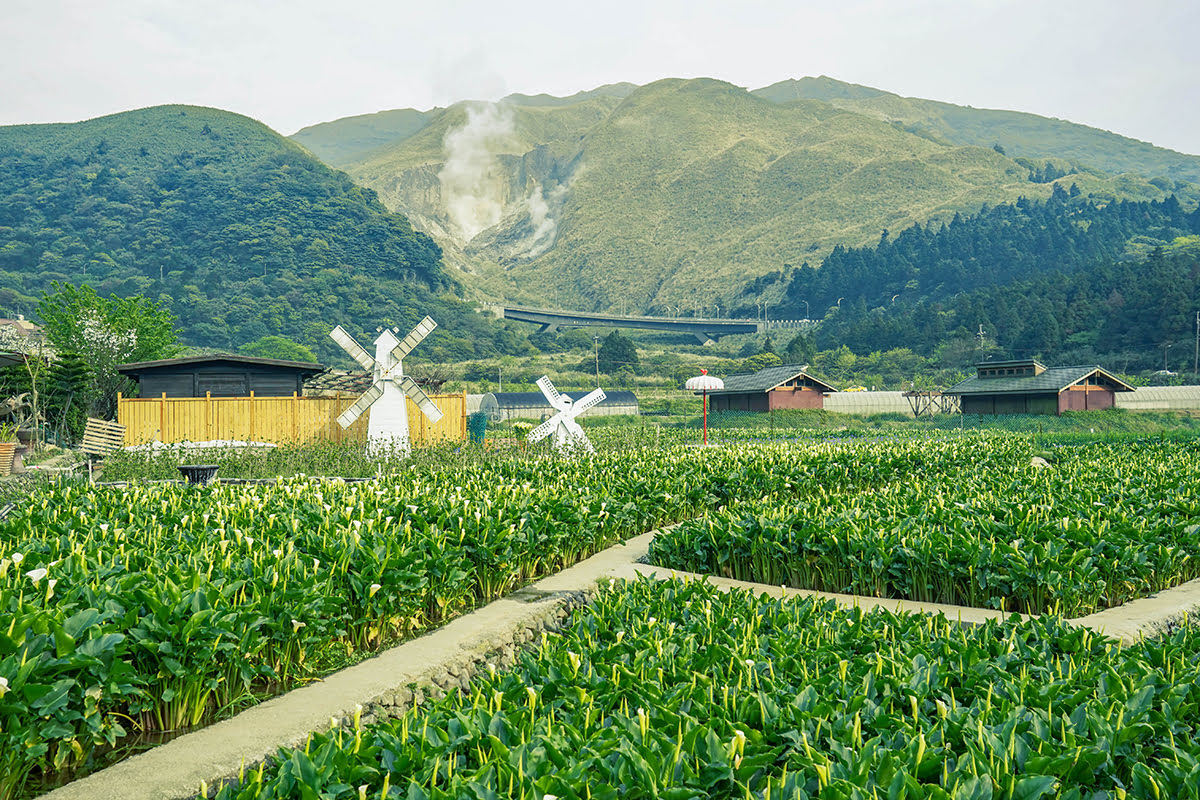 Uniquely located in Taipei‘s northern Shilin District, Shilin Night Market lies between the bustling city and the green countryside. There are a lot of things to see and do nearby before heading to the market when it starts to open. Home to museums, parks, and entertainment facilities, Shilin District is a great place to do some sightseeing and experience the culture of Taipei.

Top attractions in and around Shilin District

Check In to a hotel or apartment near Jiantan Station Step Out to Shilin Night Market