Bars in Paris: Guide to Parisian Pubs & Nightlife in France

While Paris is loved for its wonderful cuisine, bars in Paris also have a reputation to uphold! Paris nightlife contains some of the best cocktail bars and cabarets in the world. Visit a bar at which Hemingway wrote or sip a cocktail in a Belle Epoch (Beautiful Era)-themed pub while surrounded by gorgeous, art nouveau architecture. 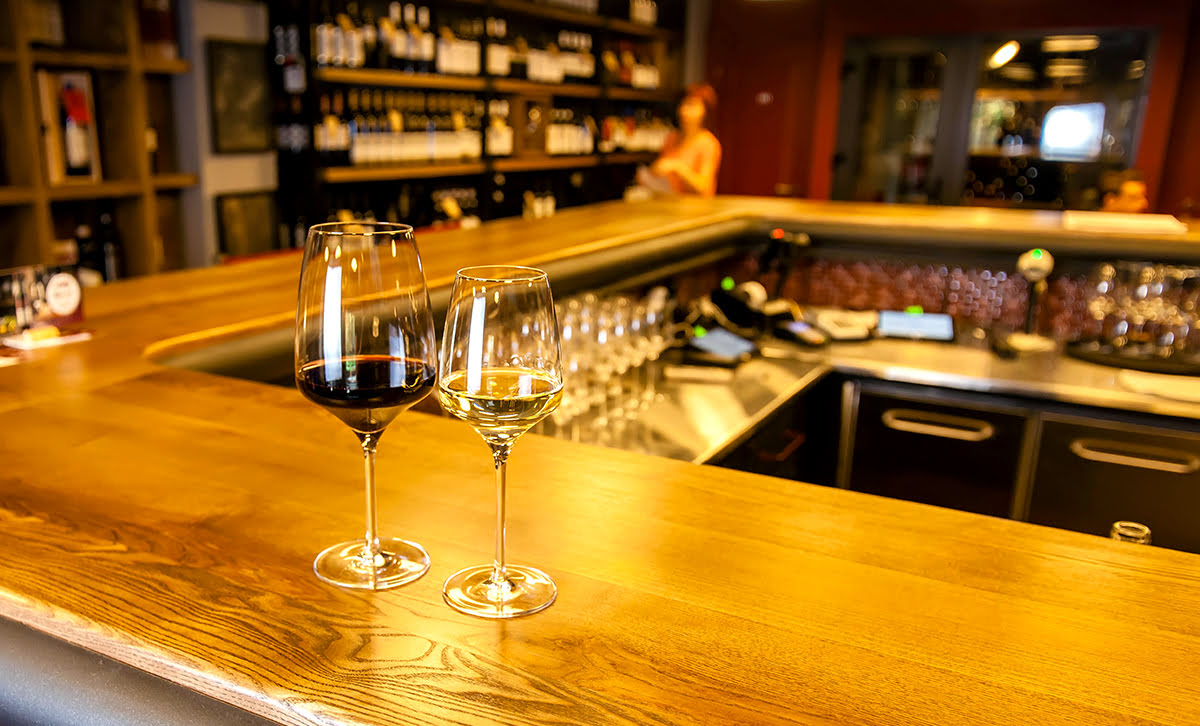 Paris, and all of France for that matter, is known for world-class wines. With offerings that include wine cellars to contemporary bistros, wine bars in Paris are the perfect place to pop a cork.

This wonderful wine bar is popular with locals and is a great place to visit if you’re looking for a wine experience without all the tourists. Head up to the bar and take a look at the wine list that’s written on blackboards. If you’re unsure of what you’d like, choose a “Wine of the Month.” Alternatively, if you’re new at wine tasting – or just want some advice – you can ask the staff for recommendations. Le Baron Rouge also serves French snacks for less than 10 euros. 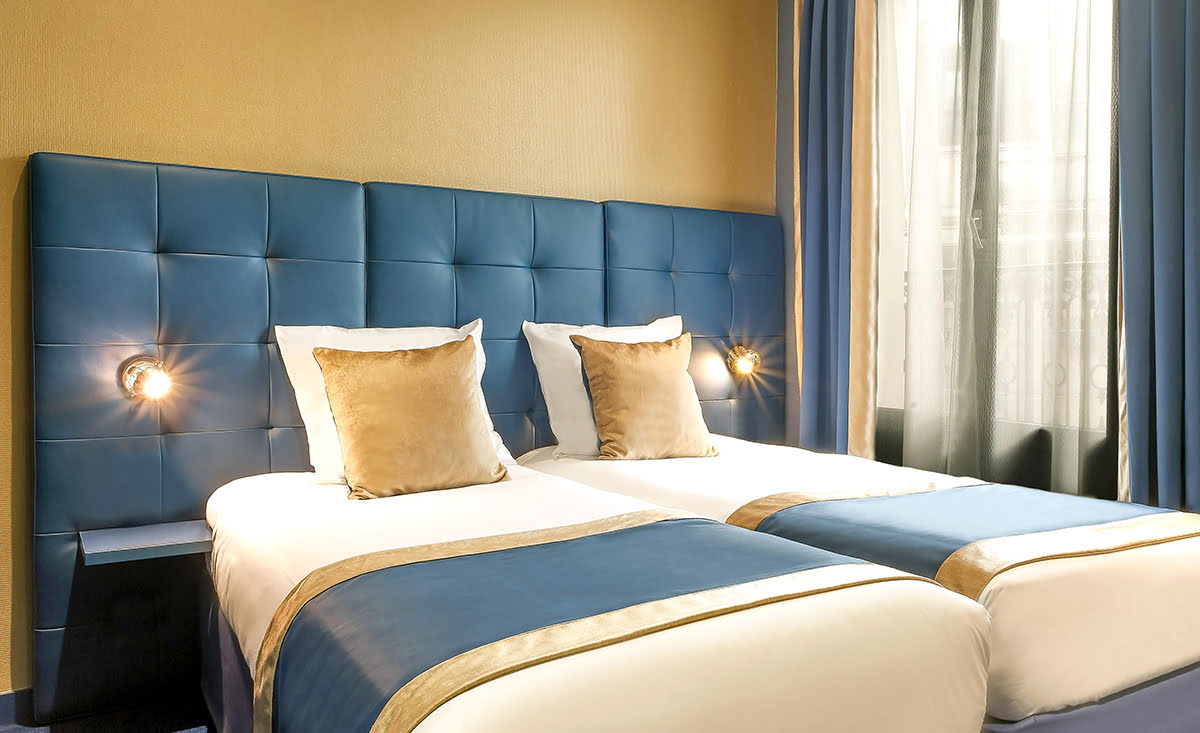 Located near the Louvre Museum, Le Garde Robe is a great wine bar to choose if you’re looking for a relaxed atmosphere and natural wines. If you’re not familiar with natural wines, this name simply refers to wines that have been processed with minimal chemicals and technology. Choose from a selection of fantastic wines at Le Garde Robe and be sure to pair your selection with some great food. If you’re unsure about what would work best with your wine selection, the staff can probably point you in the right direction. With a fun atmosphere that sometimes spills out onto the streets, stop by Le Garde Robe the next time you’re hunting for wine and enjoy the nightlife in Paris.

Check In to Snob Hotel By Elegancia 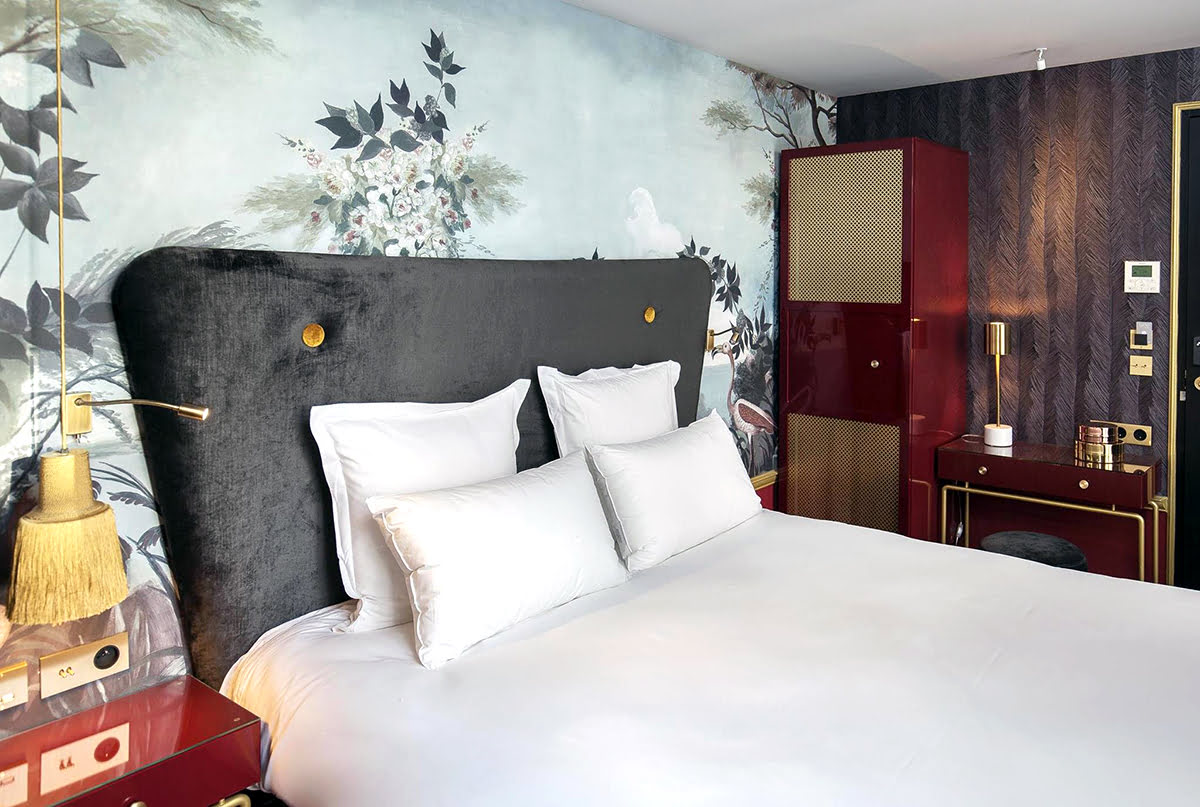 Located inside Le 6 Paul Bert restaurant, La Cave Du Paul Bert is a small wine cave that packs a punch. Only large enough to seat about 10, the Paris bar is best visited early for patrons who want a seat. Choose from a special selection of wines and be sure to try one of the small, seasonal snack plates. If you’re not sure where to start, the sommelier should be on hand to offer you some assistance when making your wine selection. La Cave Du Paul Bert is open until 11 pm but often stays open later when crowds gather to enjoy Paris nightlife. 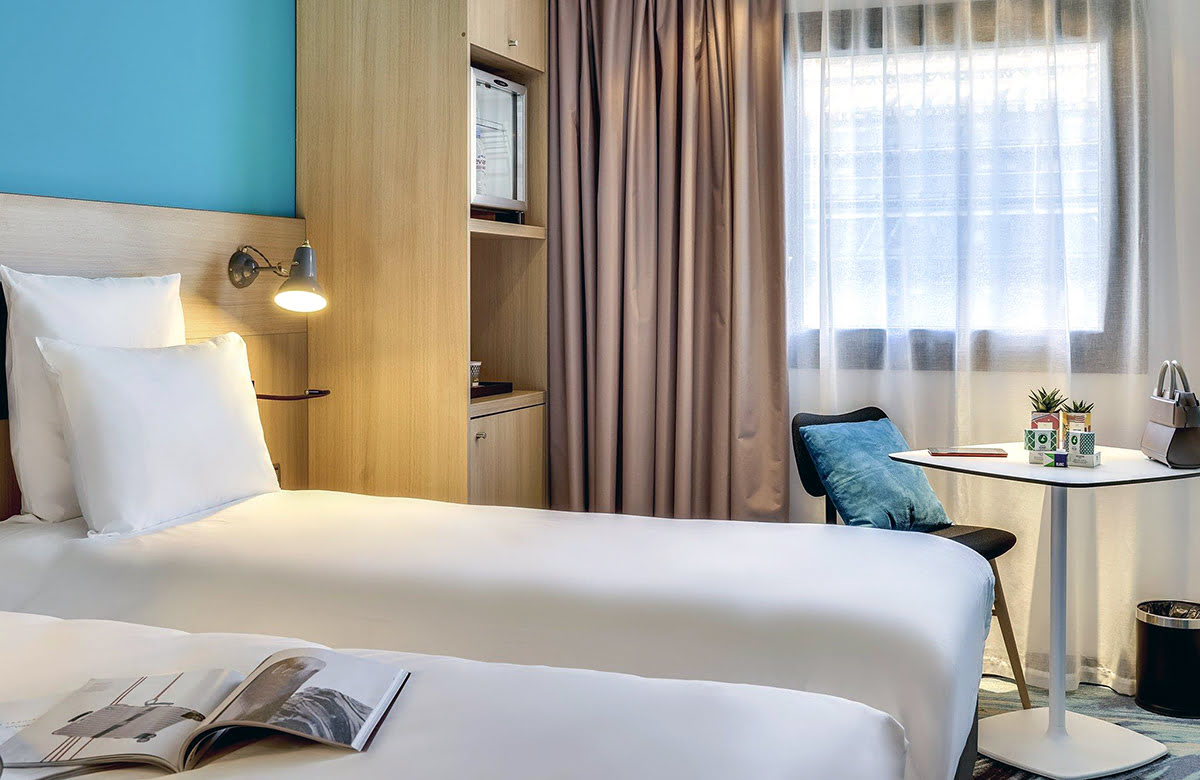 Step Out to the Viaduc des Arts Paris Nightlife | The Best Pubs and Dive Bars in Paris

Though pubs are often thought of as a place where the English go to get a pint, Paris also has a great selection of pubs, as well as quirky, hipster dive bars. Pubs in Paris often boast great beers (French and otherwise) along with hearty food, and these locations can be a great way to start your evening or end it.

If you’re a fan of craft beer, delicious homemade food, and a wonderful atmosphere, then The Green Goose bar in Paris is a great choice. With a selection of beer on tap, in addition to some bottled Irish craft beers, The Green Goose also serves an assortment of Irish pub foods. Additionally, The Green Goose has a great brunch menu that is open from noon to 4 pm every Sunday. The cost is 22 euros.

Transportation near The Green Goose

Check In to Le Patio Bastille 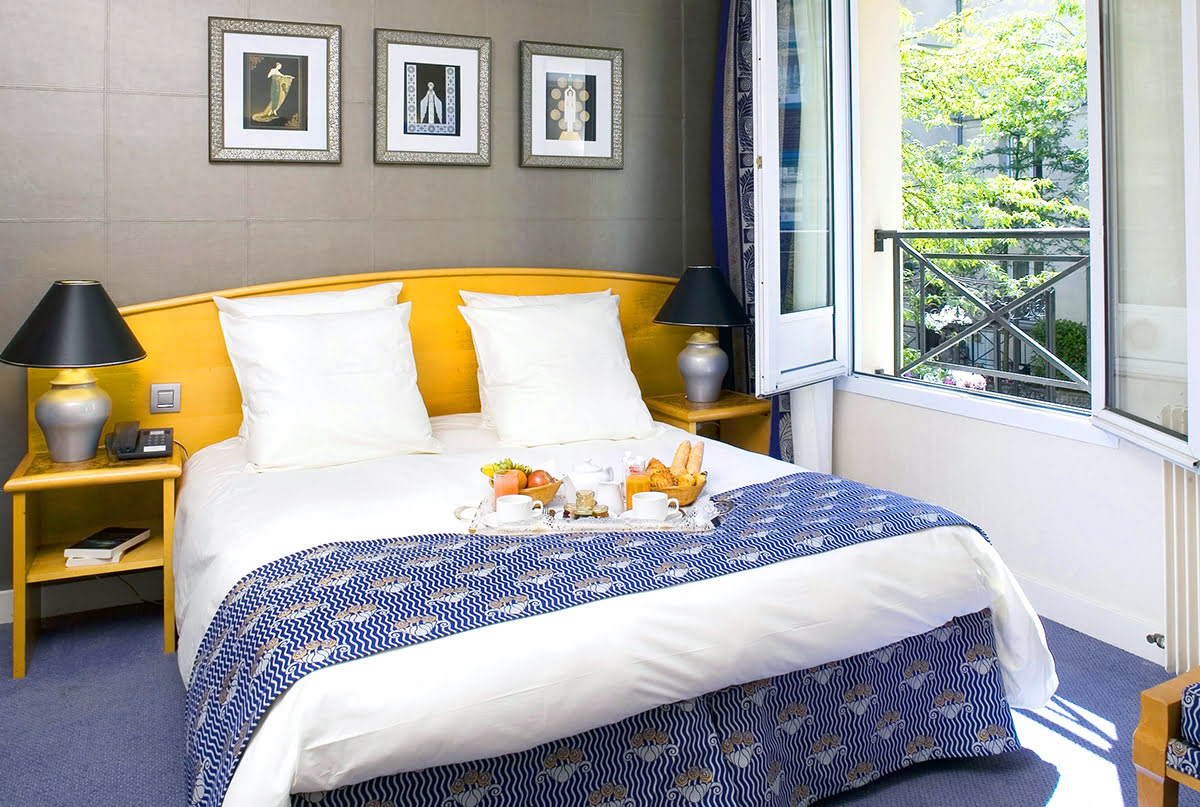 This pub in Paris offers a great selection of French beers on tap, and combined with its cozy atmosphere, amazing service, and wonderful happy hour (which includes a 3 euro pint), Le Pantalon is a wonderful bar to visit if you are looking for something inexpensive and cozy. Le Pantalon doesn’t serve food, so this is purely a Paris bar.

Check In to Villa Pantheon Hotel Step Out to the Latin Quarter

10 BAR Odeon boasts the best sangria in Paris, and you’ll also get to enjoy fun music in a great atmosphere, as 10 BAR Odeon has a jukebox! Make sure you bring cash to 10 BAR Odeon, as cards are not accepted. If you’re hungry, the Paris bar offers a selection of meat and cheese snacks, but if you’re looking for dinner, you may want to eat prior to arriving. 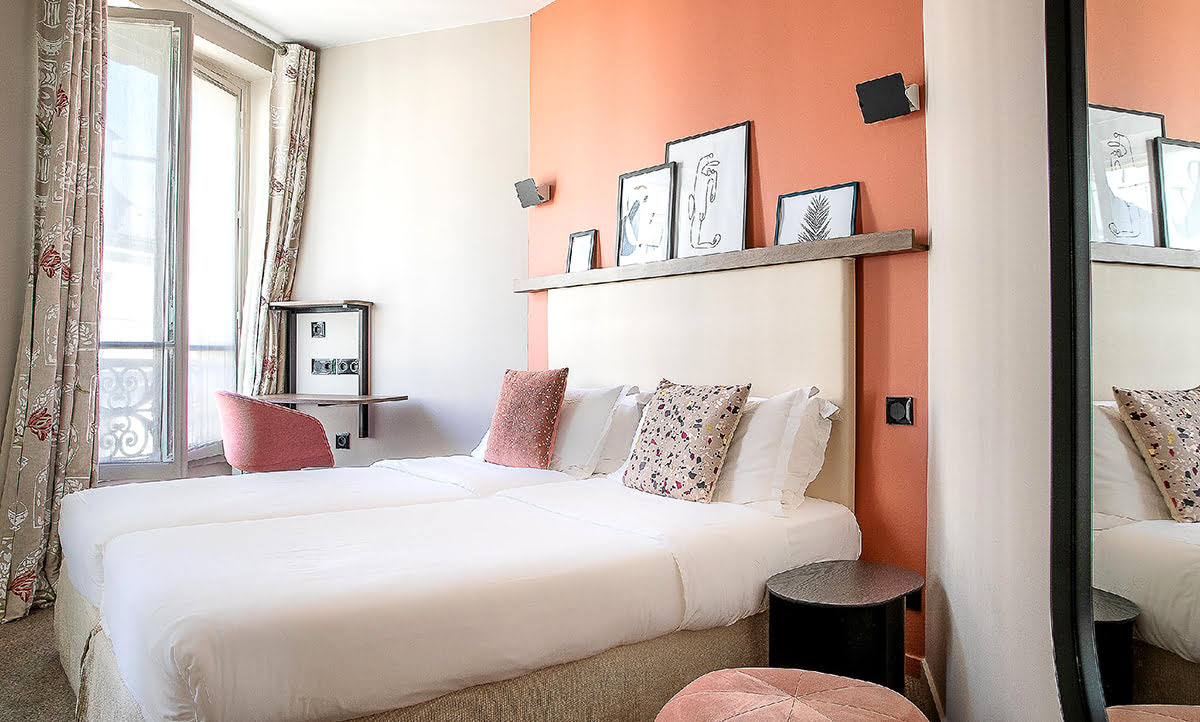 Step Out to Notre Dame 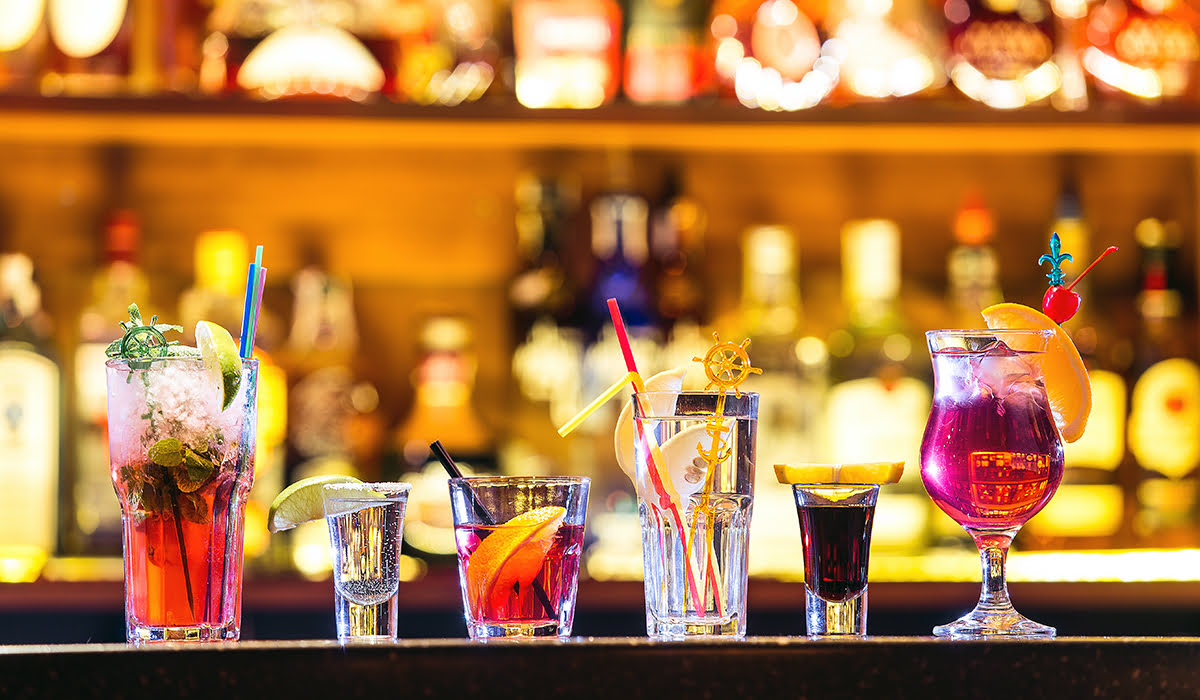 Paris was once known as the city to visit if you enjoyed a good cocktail bar. While cocktails in Paris fell out of favor after the early part of the 20th century, recently there has been a resurgence in popularity for cocktail bars, which is great for visitors to the city as you can again experience the fun and ambiance of a speakeasy in Paris. Whether you’re looking for small and hip bars or classic bars that were once the haunts of celebrities, Paris has some great cocktail bars where you can wet your whistle.

If you’re looking for a bar that screams “Tiki Bar,” grab a cocktail at Dirty Dick! This eccentric bar in south Pigalle is a hipster’s dream that features quirky décor (including bamboo furniture, colored lights, and stuffed animals), tiki glasses, and a wicked vibe.

Check In to Montholon Hotel 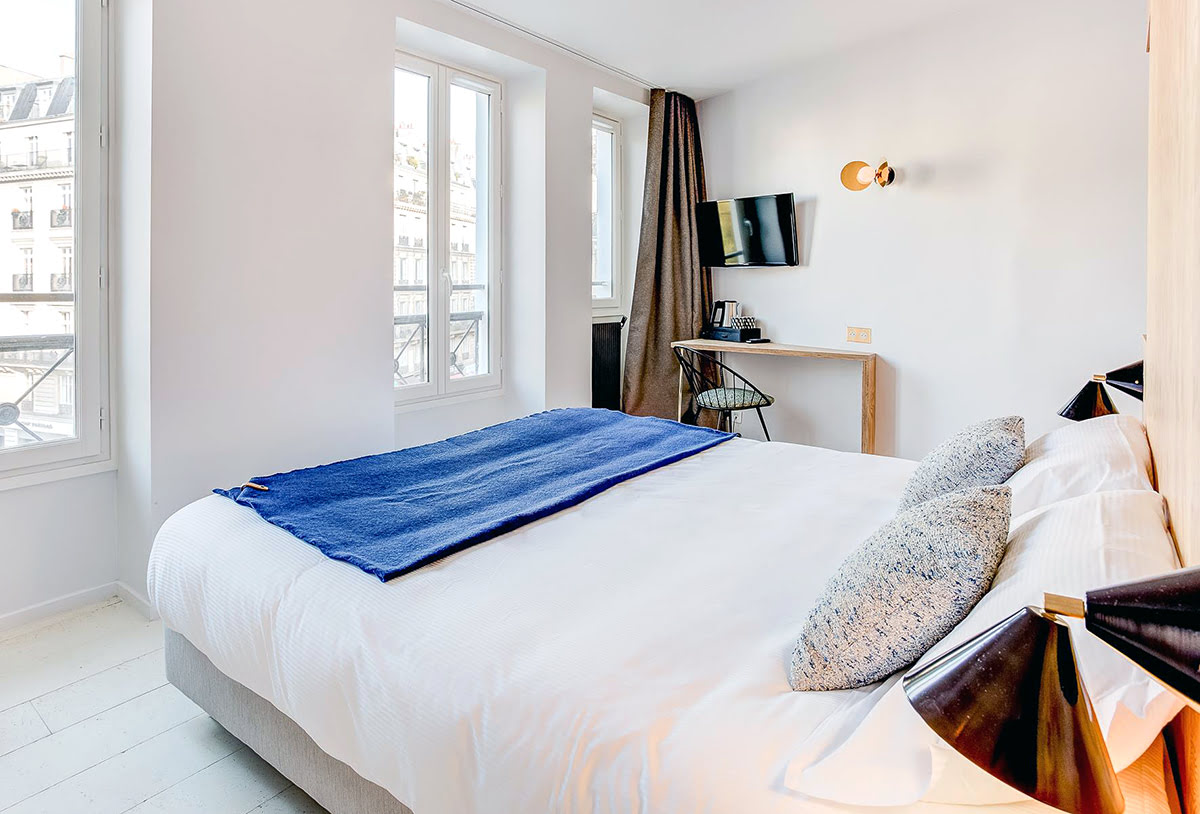 Step Out to Montmartre

If you’re looking for a piece of the high life in Paris, stop at Bar Hemingway, located in Hotel Ritz Paris. Famous for once being the haunt of Ernest Hemingway, Gary Cooper, and Cole Porter, Bar Hemingway offers world-class ambiance and fantastic cocktails. Head Barman Colin Peter Field serves up amazing alcoholic concoctions, and Bar Hemingway is open from 6 pm to 2 am.

Check In to Louvre Marsollier Opera Step Out to Bar Hemingway

Considered by some to be one of the best bars in the world, Le Syndicat offers a bar experience like no other. With specialty drinks that help you “experience” the wonder of the monuments for which they were named (including the Louvre and the Moulin Rouge), Le Syndicat seeks to capture their cultural essence in a glass. Though it may sound a little highbrow, Le Syndicat maintains a great atmosphere that is easy to slide into. 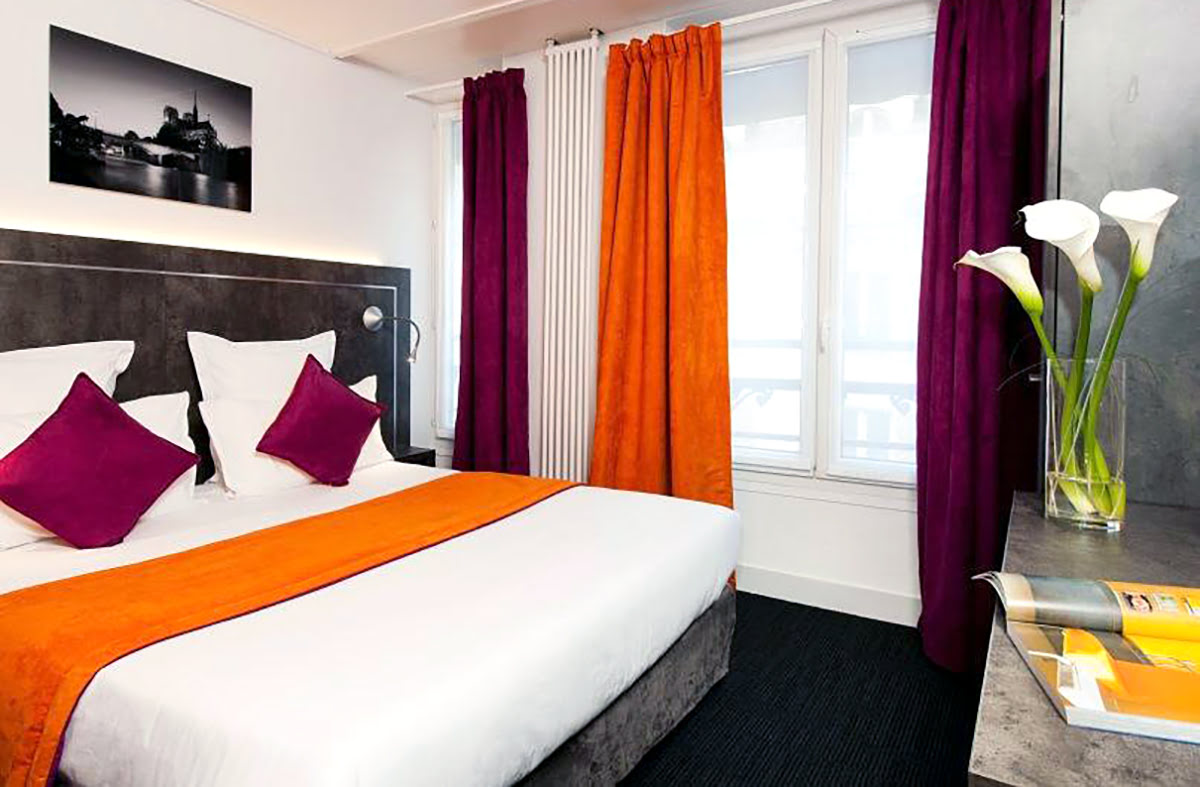 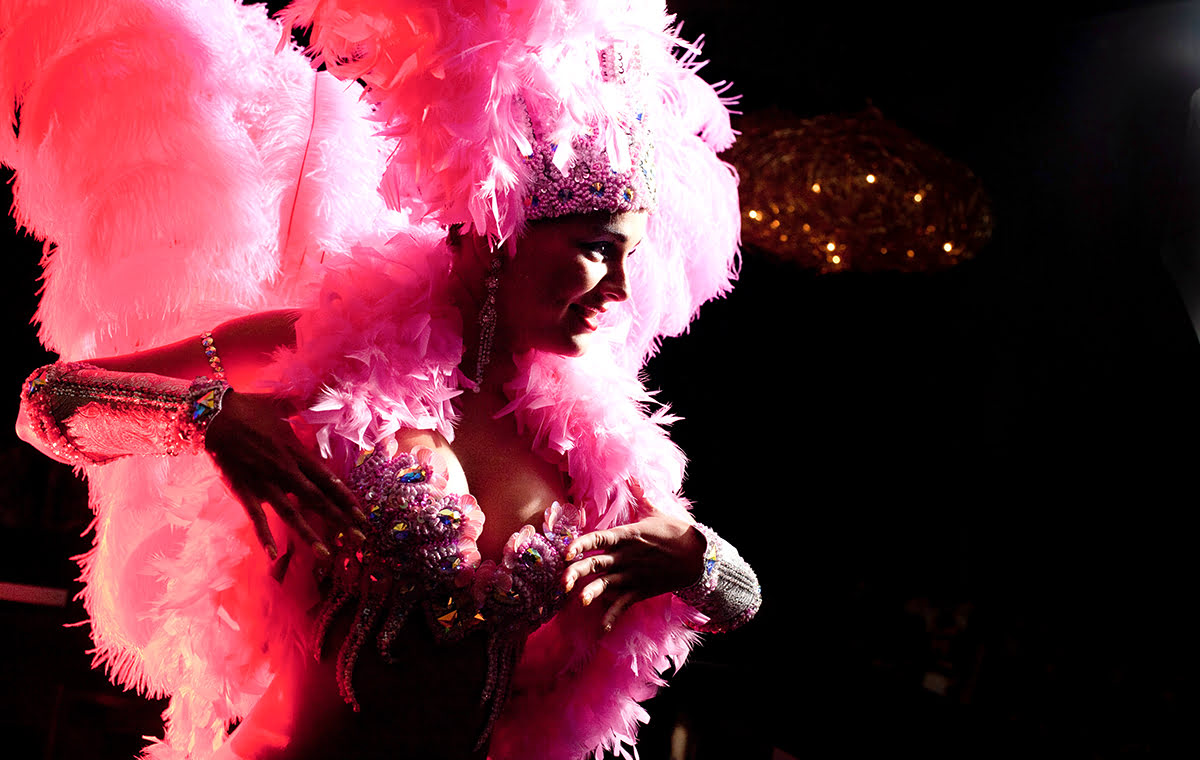 Live a little! Cabarets with Dinner & Drinks in Paris

Paris is known for its traditional cabarets, so when you visit the city, it’s good to make a point to visit at least one. If you’re not familiar with cabarets, it’s generally where people go if they are looking for entertainment with drinks and a meal. Paris has plenty of traditional – and lots of risque – cabarets!

This is it, probably the most famous cabaret in the world, the Moulin Rouge! Made famous by its reputation, and also for being memorialized by cinema and art, the Moulin Rouge is the birthplace of the Can Can dance. Though the original building burned down in 1915, the existing cabaret theater has earned its place in history. Enter a flashy, spectacular party and experience rousing entertainment known for being quite risqué. This performance isn’t for the faint of heart, but the Moulin Rouge is undoubtedly one of the best places to experience Paris nightlife. 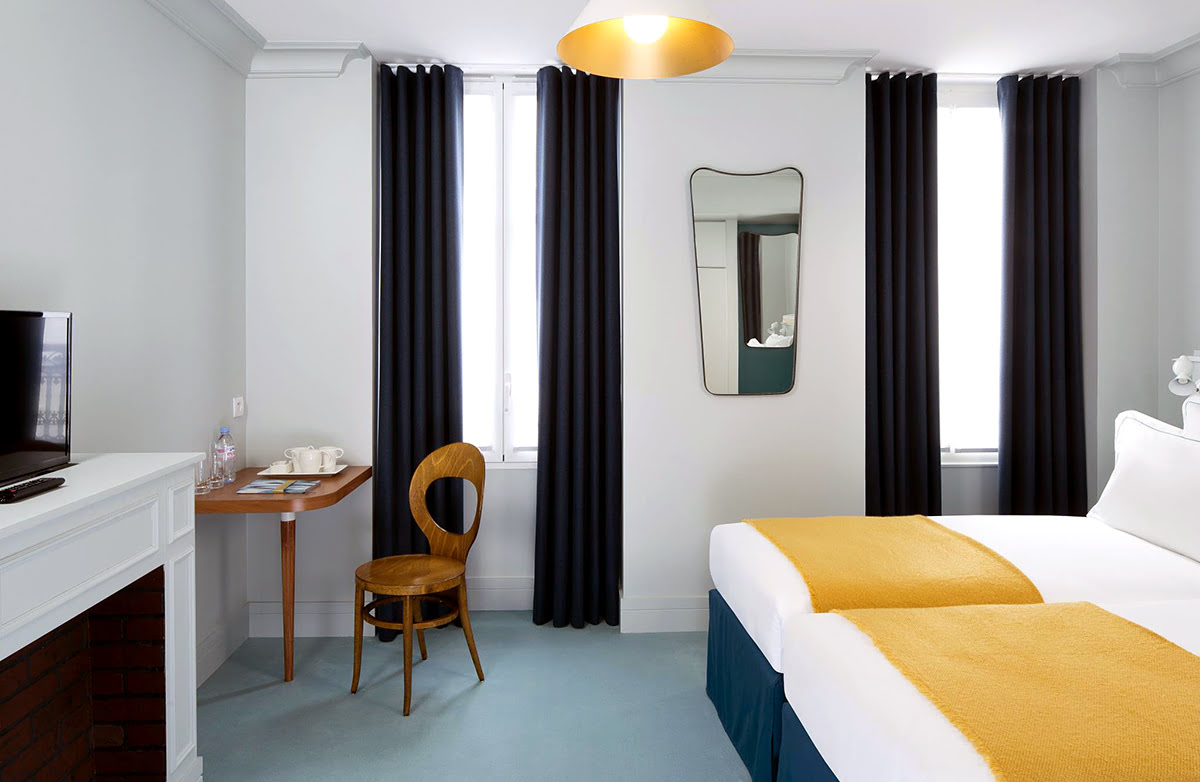 Step Out to bars in Paris near Moulin Rouge

Check In to Beauchamps Hotel 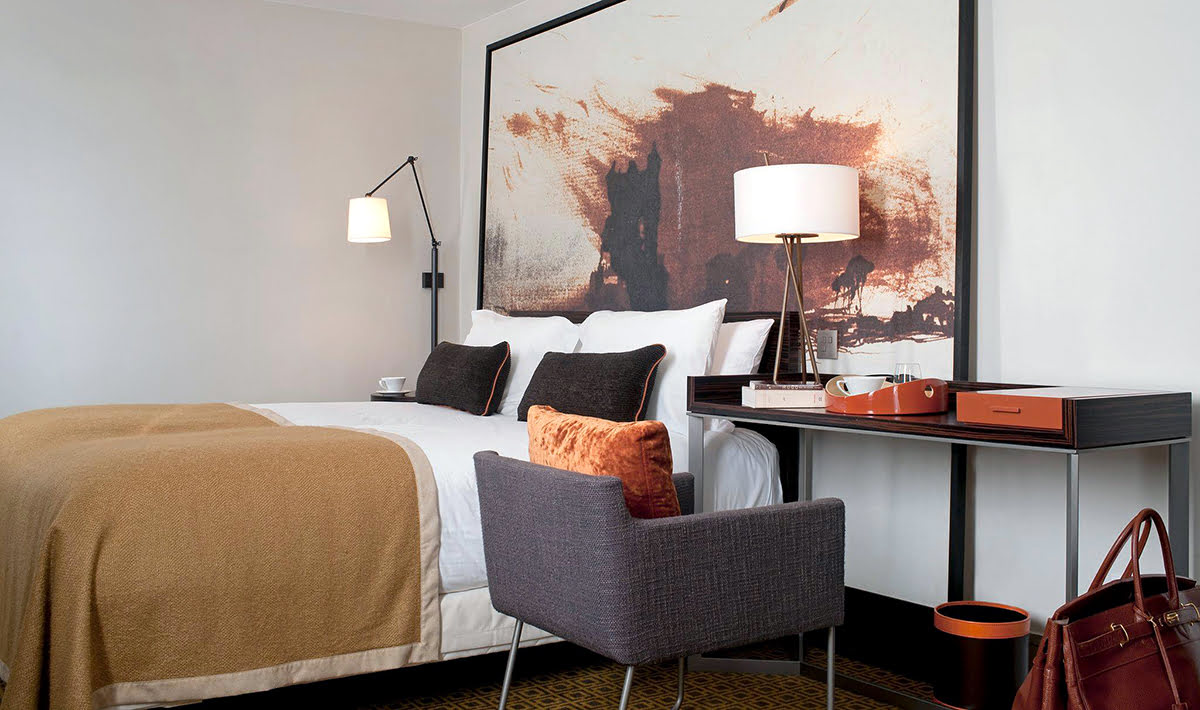 Step Out to Champs-Elysees Avenue

The Crazy Horse Paris is a famous cabaret in Paris that is known for saucy shows as well as magic and variety-style entertainment between cabaret sets. Crazy Horse Paris has counterparts around the world, but when you’re in Paris, you can see the original! Step Out to bars in Paris near Arc de Triomphe Monument 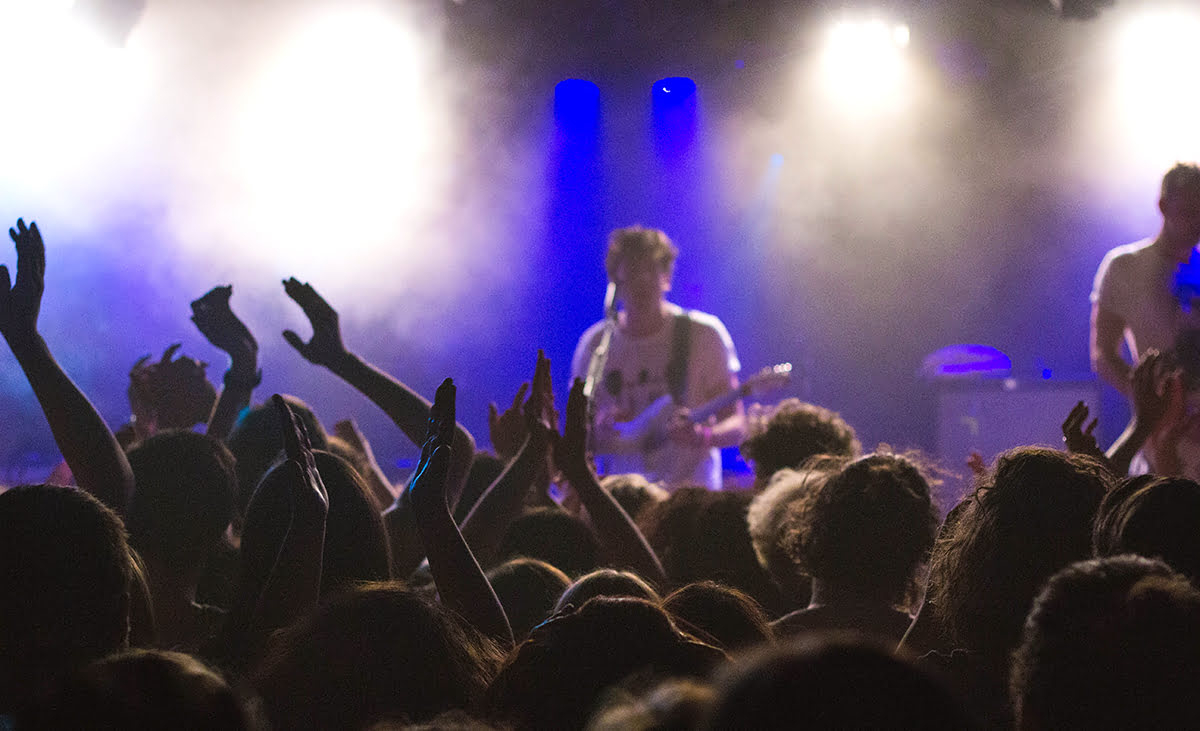 Nightclubs in Paris range from fancy to casual, and it’s important to dress the part in Paris. Bouncers at high-end Paris nightclubs have been known to turn underdressed people away at the door. Also, remember that most clubs in the city will have some sort of cover fee, so don’t forget to factor that into your nightlife budget!

Check In to Hotel Minerve Supersonic is a great location if you’re wanting to catch some live music while you’re in Paris. Featuring live acts from around the world, good prices for beer and snacks, and great service, Supersonic often boasts a packed venue. Pick up tickets to live shows beforehand because acts at Supersonic sell out quickly. 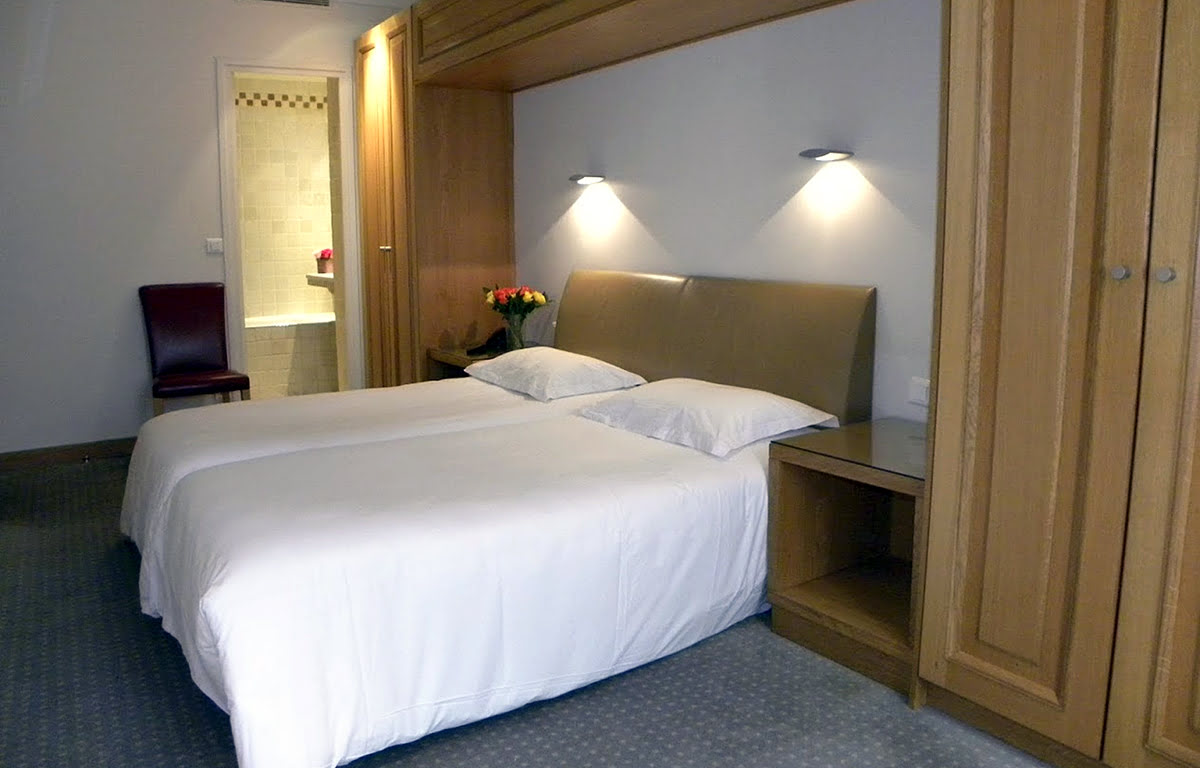 Step Out to bars in Paris near Notre Dame

This famous club is a great spot if you’re looking to spend a lively evening out dancing in Paris. Frequented by locals, Le Palace Club Paris offers a great view of Paris. Be sure to check the schedule for performance times. Located in the lovely Montmartre area, Le Palace Club Paris is surrounded by some of the best attractions and bars in Paris. Step Out to Sainte Chapelle 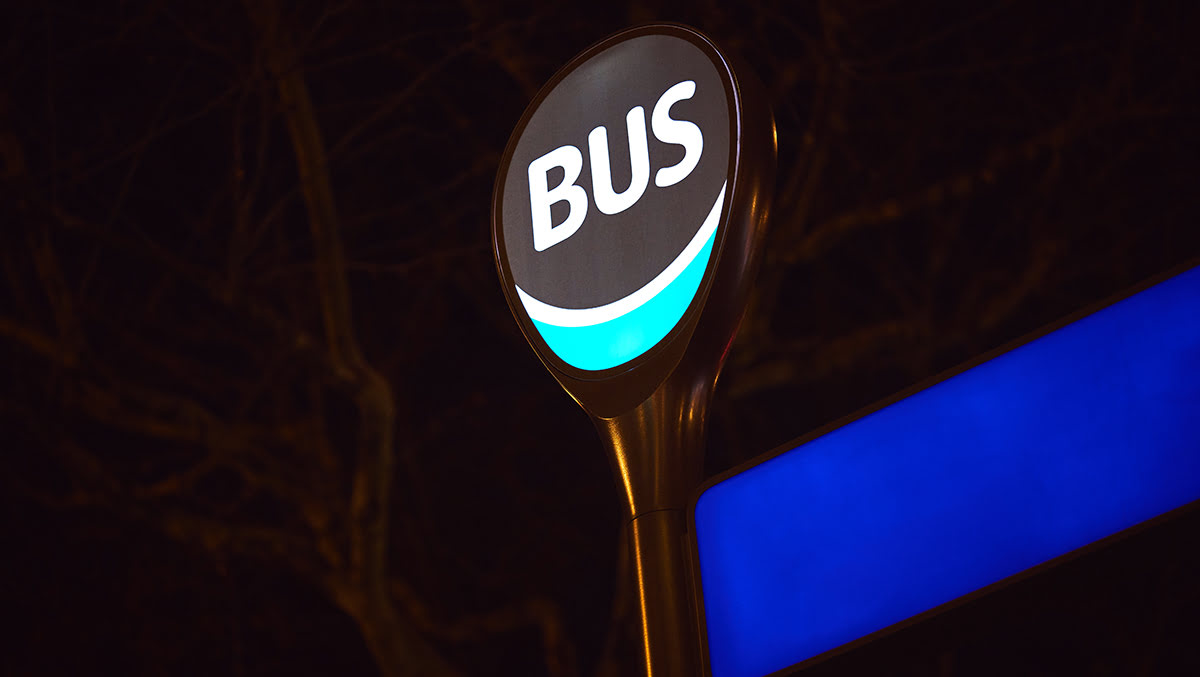 Find a Ride after Visiting Bars in Paris

While you probably won’t be driving, it’s still a great idea to plan a safe ride home when you’ve been visiting bars in Paris. Paris has a fantastic public transit system including the Paris Metro, buses, and the regional train system. It’s good to keep in mind, however, that the public transit options in Paris aren’t open all the time, so if you are going to be out very late, you should arrange to take a taxi to your hotel. Walking home at night, after drinking, isn’t always the safest option. Paris streets can be hard to navigate during the day, so after a night of having fun, directions can get confusing. Plan ahead by knowing the hours of operation for the Paris Metro and bus systems.

Hours of operation for buses in Paris depend on the line, but main routes generally are open during the following hours:

Check In to Hotel Louison 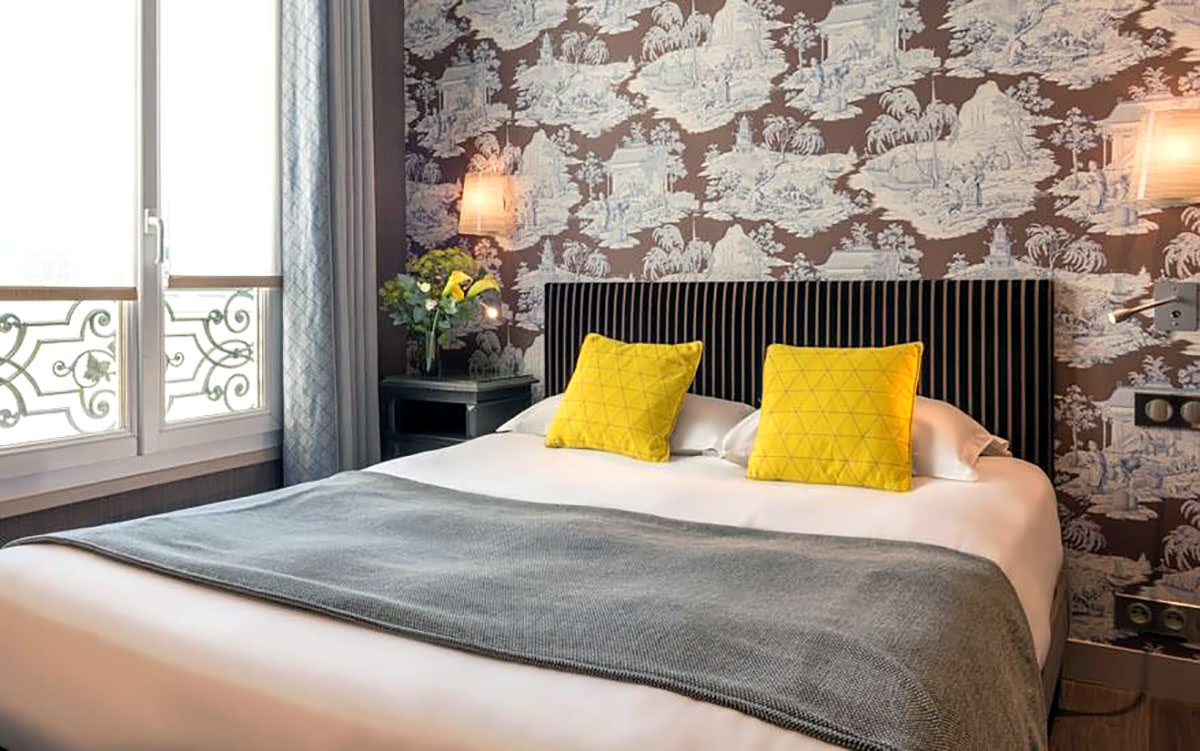 Step Out to the Eiffel Tower