If you’re planning a trip to the Palace of Versailles in Paris, you’ll want to design an itinerary for your visit that allows you to make the most of this stunning attraction and its picturesque surroundings. Versailles is one of the most visited tourist attractions in France and is famous for its historical and cultural elements. Easily one of the most opulent palaces in the world, Palace and Park of Versailles has been listed as a UNESCO World Heritage Site. Filled with notable features like its impressive Hall of Mirrors and dazzling Royal Opera, Versailles is sure to be a highlight for any trip to Paris. There are tours of the palace that range between two hours and four hours, but much of the palace can be explored as visitors wish. Introduction to Palace of Versailles

Along with the Louvre and Eiffel Tower, the Palace of Versailles is one of the most-visited monuments in the Ile-de-France region. More than seven million people visit this historic castle and its grounds annually. The illustrious Palace of Versailles is situated to the west of Paris. In fact, it’s just 15 miles from central Paris. A symbol of the opulence and, some say, the frivolity and decadence of royalty, Versailles is most often associated with French King Louis XIV who undertook many renovations to elevate the chateau’s grandeur, but it served as a royal residence for other French monarchs, including the deposed Louis the XVI and his wife Queen Marie Antoinette.

Chateau de Versailles, as it is known to the French, spreads over 800 hectares along with its gardens. Many visitors also make their way to the Trianons (Le Trianon), once part of the estate during the life of Louis XIV, but is now a separate attraction. Once a seat of French power, the Versailles Palace today is a museum that celebrates elements of French history. When visiting Versailles’s grounds, visitors will want take time to note highlights like the chandelier-strewn Hall of Mirrors, the Royal Opera, the Marble Court, the Chapel, and, of course, the gardens with their fountains, statues, and botanicals. 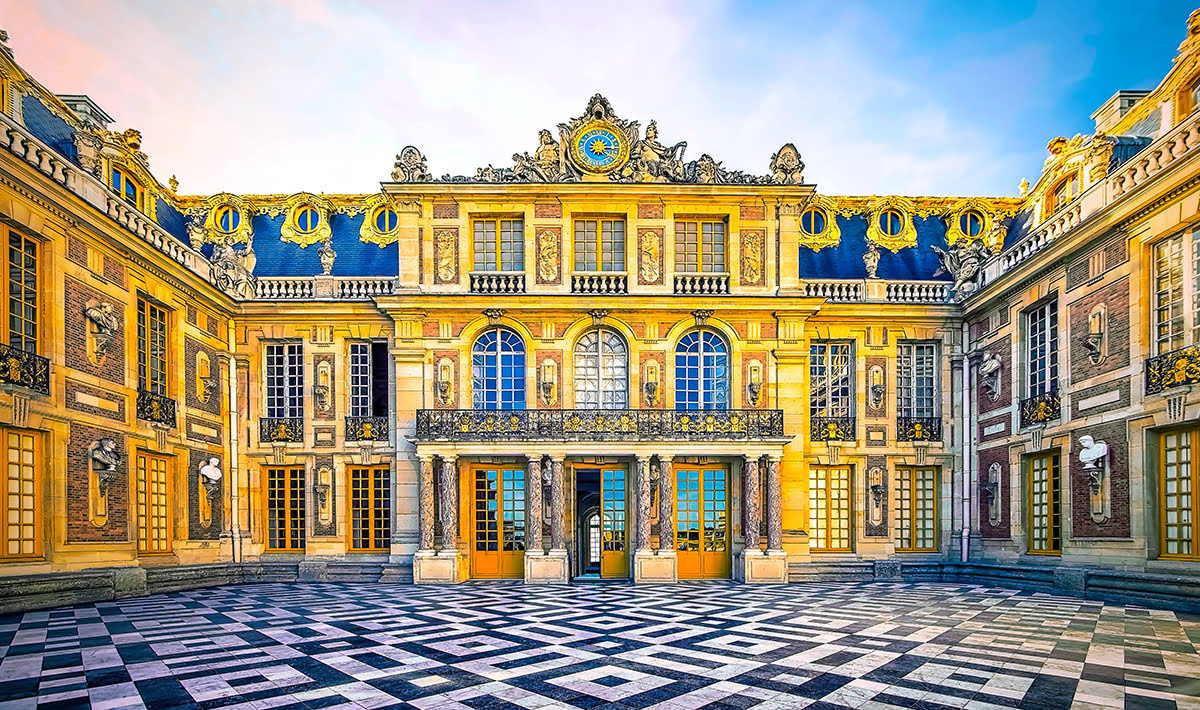 The History of Versailles

The site of Versailles was once home to a small village and church. French King Henry IV visited the area in 1589 and then a few times after to hunt in the area’s game-rich lands. His son enjoyed hunting there so much, he built a hunting lodge there when he became king. The Marble Court is actually built on the site of that original lodge constructed by Louis XIII. For reasons both political and personal, the king decided to transform his lodge into a chateau, which he completed in 1634.

In 1661, King Louis XIV decided to substantially enlarge the chateau and its grounds for his elaborate entertainments and where he could escape from bustling Paris to relax. Eventually, he would move the French government and court to Versailles altogether. Louis XIV is credited with adding the Hall of Mirrors to the chateau. His predecessor, Louis XV, added the Royal Opera to the structure.

Louis XVI and Marie Antoinette were the last royals to make their home at Versailles. The king gave his wife the Petit Trianon, where she made many changes, especially to the arboretum which would come to be known as the Hameau de la Reine. The French Revolution saw the pair removed from Versailles and eventually executed. Subsequent leaders like Napoleon Bonaparte did not choose to live there owing to the expense required for its renovation. When it did reopen, it did so as a museum. Highlights of the Versailles Palace and Gardens

Many visitors report that a single day simply isn’t enough time to enjoy everything that Versailles has to offer. Even so, if time is limited, there are some must-see attractions of the palace and its park to witness if at all possible. When visiting the Versailles Park (Jardins du Château de Versailles), it’s helpful to procure a map of the chateau and gardens so that you can easily locate the highlights of Versailles. Possibly the most famous of all the rooms of the Chateau de Versailles, the glittering Hall of Mirrors contains 357 mirrors that reflect the gold surfaces and sparkling crystal chandeliers that line the space. Beautiful in the extreme, the Hall of Mirrors also contains painted compositions on its ceiling that depict the history of Louis XIV. The gallery was designed by Jules Hardouin-Mansart and completed in 1684. Ideally, visitors should try to catch a performance at the Royal Opera. If that’s impossible, witnessing it during a tour of the palace will have to do. The Royal Opera is the main theatre of Versailles. The theatre can accommodate 1,200 guests. It is famous for its outstanding acoustics and glorious painted marble wood construction. The Chapel of Versailles was built during the reign of Louis XIV. It was completed in 1710 and is notably several metres taller than surrounding buildings. Each day, it is said that the king worshipped in his chapel which contains many works of art by notable artists of the 17th century. Various historic events such as the marriage of the Dauphin Louis XVI and Marie Antoinette have taken place in awe-inspiring chapel. The Grands Appartements du Roi represent the public spaces associated with the King and his court. Each of the salons is named for a classical deity. They were used as spaces for meetings and ceremonies held by the king.

The King’s Private Apartment, also known as Appartement Prive des Roi, is actually a suite of rooms that were the king’s living quarters. They overlooked the Marble Courtyard and are located in the oldest part of the castle. In time the rooms would serve as Louis XIV’s working quarters.

Sweetly feminine with their floral patterns and damask wallpapers, the apartments of the queen reveal the softer side of Versailles. With more delicate furnishings, these rooms highlight the influence of the palace’s various queens. 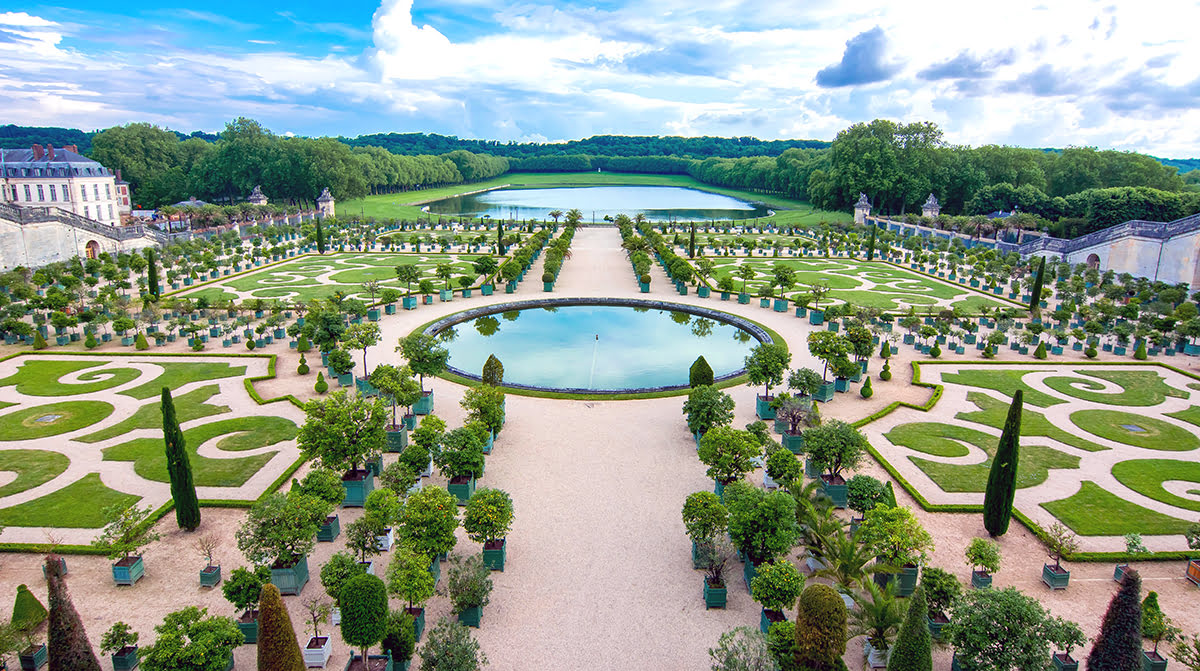 The gardens and grounds of Versailles have influenced subsequent royal gardens around the world. The gardens’ location is to the west of the palace and are organized in the French garden style. Created and renovated by Andre Le Notre, the gardens have become one of the major attractions of the park. Visitors are sure to marvel at its parterres and paths, fountains, orangery, picturesque walks, groves, and sculptures. If you have time, be sure to see other noteworthy areas of the palace and the Trianon Estate. Again, be sure to procure a map of the entire park in order easily navigate the extensive floor plan of the castle and the surrounding grounds. Versailles is located about 15 miles from Central Paris. The area of the palace and its grounds can be reached by private car (there is parking available at the park), train, bus, and taxi. Central Paris is linked to Versailles via the RER C line. When disembarking, travelers should note that it’s a five-minute walk from the Versailles Rive Gauche Station to the chateau.

The Palace of Versailles is open daily except Mondays from 9 AM to 5:30 PM. The gardens are open daily from 8 AM to 6 PM. The Estate of Trianon is open during afternoon hours (except on Mondays) from 12 PM to 5:30 PM.

Guided Tours of Palace of Versailles

The park offers a few tours for visitors who want more in-depth information about the French castle and its tumultuous history. These guided tours are offered in French as well as English, but be sure to check on availability before your visit. In fact, some people prefer to purchase their tickets in advance to ensure their spot on the tours.

The Splendorous Versailles Tour focuses on many of the palace’s most amazing treasures like the Hall of Mirrors and the King’s Chamber. Filled with sparkle, this hour-and-thirty-minute guided tour will acquaint visitors with many of the castle’s most renowned features.

The Private Apartments of the Kings Tour takes visitors on a tour of the palace’s more intimate side. It reveals rooms and corridors not typically open to the public except by guided tour. This tour includes Louis XIV’s library and Louis XV famous rolltop desk. A view of the Grand Apartments will leave you with little doubt of the splendor that French royals surrounded themselves with even in private. Shopping near the Palace of Versailles

While the palace and gardens attract visitors from all over the world to the area, the municipality also boasts some attractions and is especially popular with shoppers. The Sun King, Louis XIV, founded the Marche Notre Dame, a public market in the town. The red brick buildings of the market house various shops that sell produce, cheeses, and some handicrafts. This 300-year-old market is one of the area’s most celebrated attractions after Versailles and the Trianon Estate.

Antiques enthusiasts will want to check out the Passage de la Geole, which features a diverse array of antiques shops that sell furniture, art, books, and more.

Aside from antiques, shoppers will find lots of antiques, departments stores, and souvenir shops near Versailles. The Palace Park (Jardin du Palais Royal), too, features shops.

Stores, Shops, and Boutiques near Versailles Best Places to Eat near Versailles

While the gold and marble surfaces of Versailles will impress you, the gastronomic experiences near Versailles Park will make your mouth water. The area features a wealth of cafes, bistros, and restaurants as well as gourmet food shops. The restaurants of Versailles range from budget and family-friendly to mid-range and upscale. While French cuisine is the rule of the day in this area, there are some other world cuisines represented as well.

And remember not to skip dessert after your 2- or 3-hour tour of Versailles. The pastries and confections in the area are not to be missed! From chocolate croissants to macaroons, a decadent array of pastries awaits. Nightlife near the Palace of Versailles

Versailles does not boast the same diversity of nightlife attractions that nearby Paris does, but it does offer a sophisticate medley of options for visitors to enjoy. From dinner at one of the above-listed restaurants to bars and clubs, the nightlife options of Versailles are well-worth exploring, especially if you plan to spend more than one day in the area. If you plan to visit the palace and gardens of Versailles one day and the Trianon Estate the next, spend the night in between exploring the streets of Versailles. You’re sure to find many welcoming pubs and taverns to lounge at.

Other Things to Do near Versailles

The castle of Versailles is, of course, the main highlight of the area, but the there are other things to enjoy beside sightseeing on the grounds of the palace and its gardens. After you’ve perused the floor plan of the chateau and perused the gardens, you might want to explore other options to enjoy. Things to Do in Versailles

Check In to a hotel or apartment near Palace of Versailles Step Out to Paris