Adventurous travelers willing to go off the beaten path are guaranteed to find dozens of historic landmarks in Saudi Arabia. Thanks to open tourism in the Kingdom, sites like Ushaiqer Heritage Village and Al Ahsa Oasis are ripe for exploring, and tourists are finding more to love about Saudi Arabia’s historic sites every day. Even if off-road desert expeditions, caving and hiking aren’t itinerary musts, visitors will find plenty of places to take them back in time in Saudi Arabia’s capital city of Riyadh. 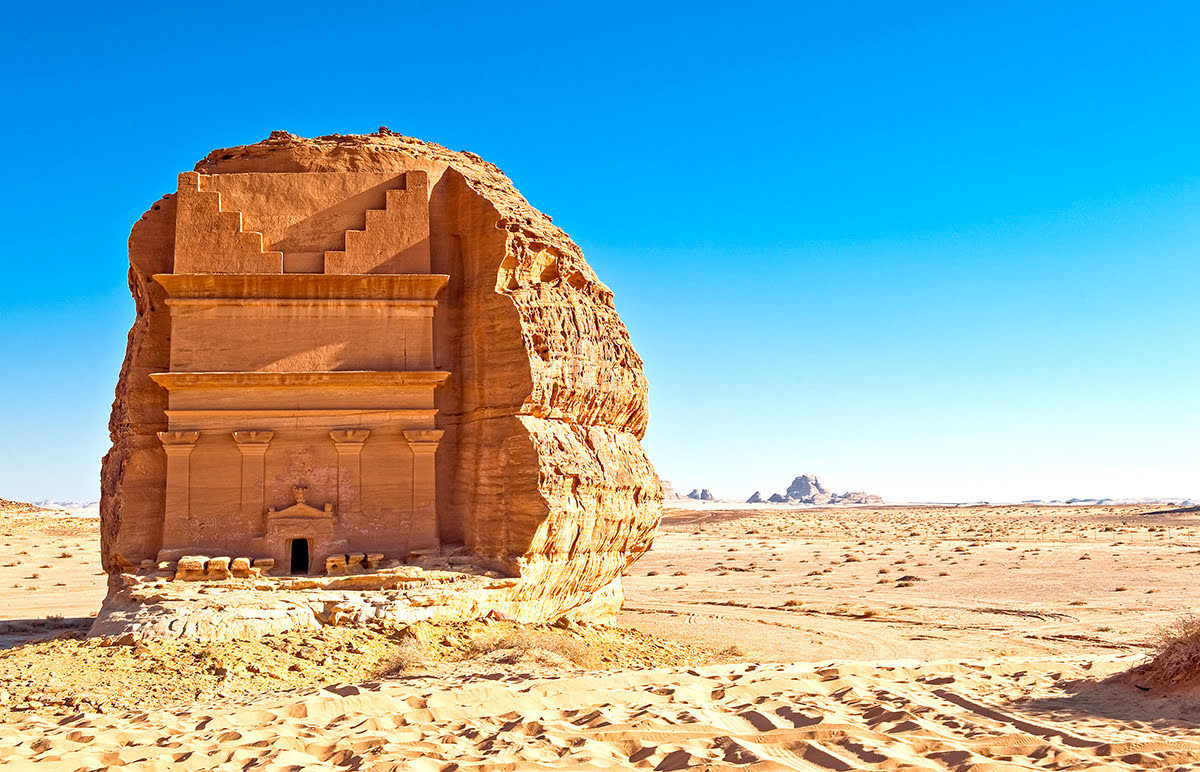 About four hours northwest of Medina lies one of the most historic landmarks in Saudi Arabia and up-and-coming tourist attractions. Al Ula currently is undergoing major transformations in preparation for the onslaught of tourism expected in the Kingdom. The ancient village is considered an oasis in the desert valley of the Medina (Madinah) Region and is located on historic Incense Road, an ancient travel-way that served as a catalyst for trade between India and the Middle East. 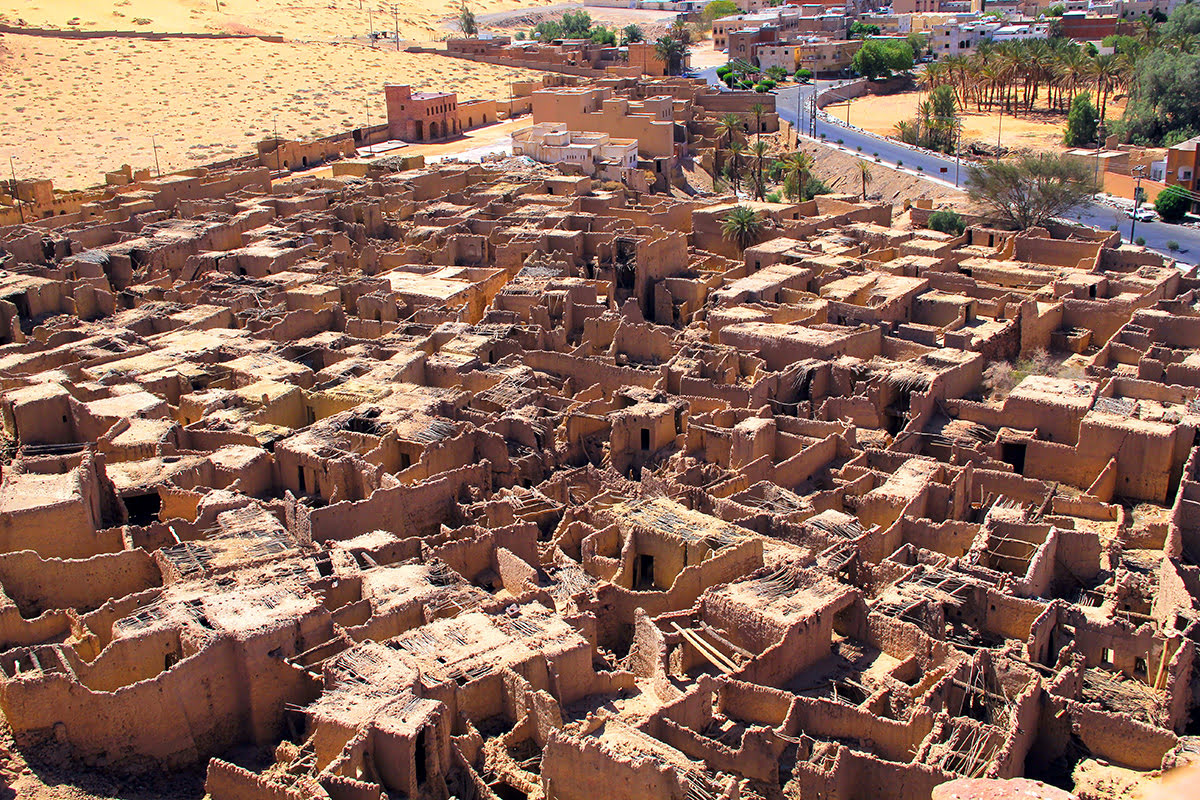 Al Ula retains much of its historic charm, particularly in Al Ula Heritage Village, where tourists can see some of the best-preserved mud-brick and stone houses in the world. Archaeologists believe the 800 homes are at least 2,000 years old. Besides Al Ula Heritage Village, visitors also should plan a stop at Al Ula Museum to learn more about the history of the region, Islam culture and native vegetation of northwest Saudi Arabia. 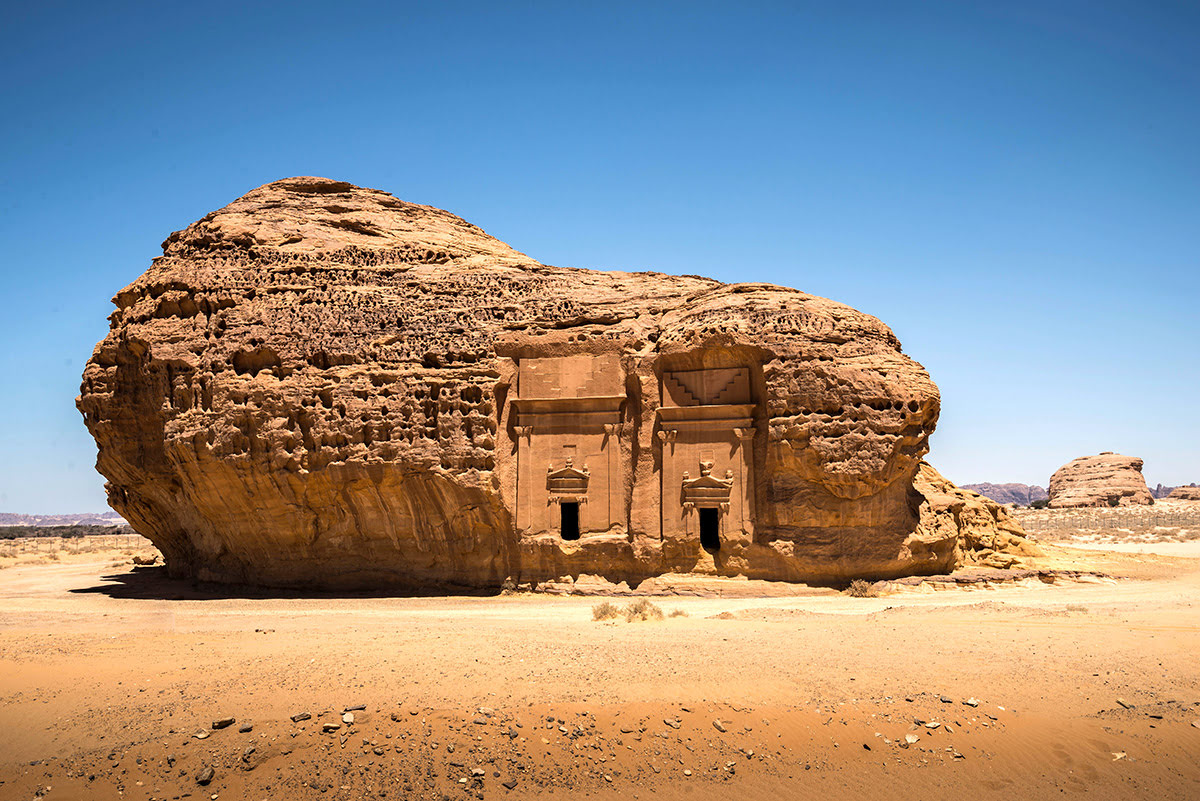 Just a 30-minute drive away, Madain Saleh is one of the main reasons people travel to Al Ula. The ancient archaeological site showcases well-preserved remains of the Nabatean kingdom and is one of the most popular landmarks in Saudi Arabia. Visitors can explore a series of 131 larger-than-life rock-cut tombs that resemble the famous structures of Petra. 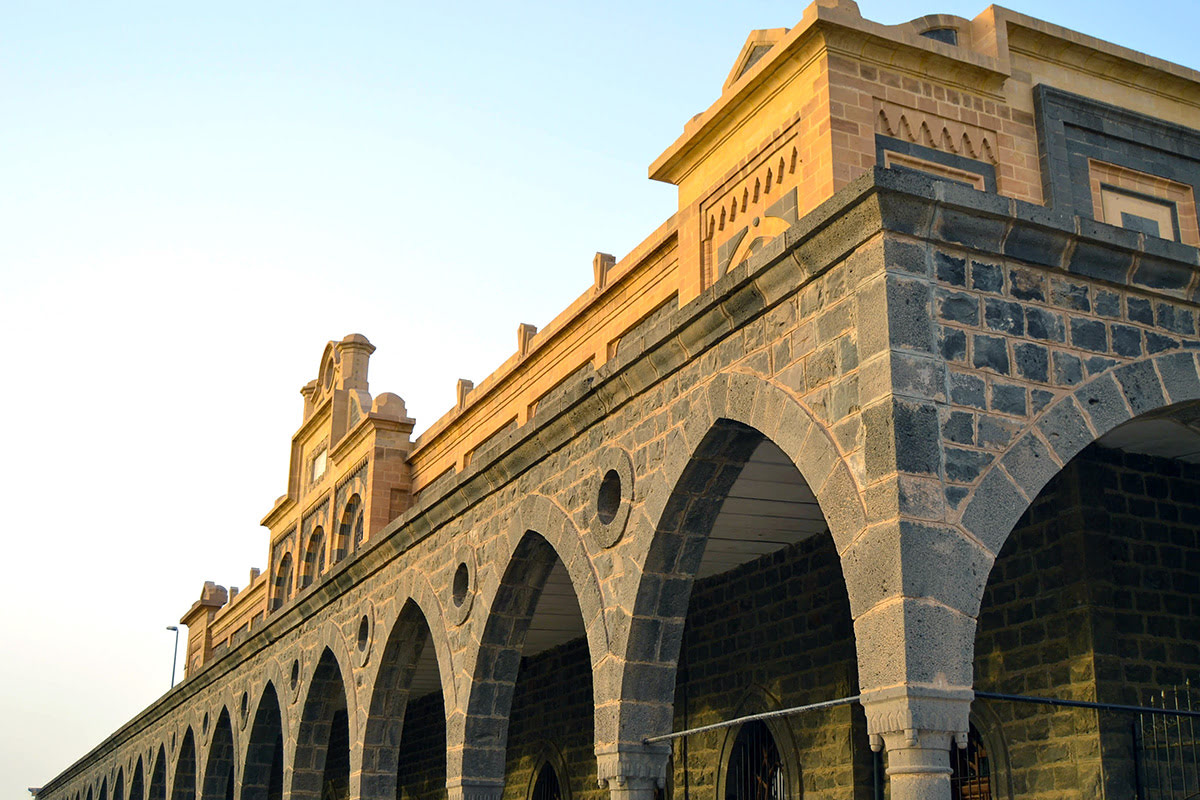 Located just outside Madain Saleh is Hejaz Railway Museum, which highlights part of the Ottoman railway network that once ran through the Hejaz, or western Saudi Arabia. Guests can learn how important the transportation system was to Islam and view some of the remains of Al Ula Station, including original tracks and trains. (The original station, which was bombed by the British in 1917, still stands in Al Ula. Tourists can stop and take photos of the compound but are not allowed to enter.) The Hejaz Railway was a monumental project proposed in the early 20th century by the Ottoman Empire. The line was meant to make pilgrimages to Medina easier for Muslims in outlying countries, but because of its enormous overhead and complications with building that hit at the beginning of World War I, the line was shut down and never reinstated. The remains of the line, which span from Damascus, Syria, to Medina, Saudi Arabia, are designated as a UNESCO World Heritage Site and one of the most treasured landmarks in Saudi Arabia. 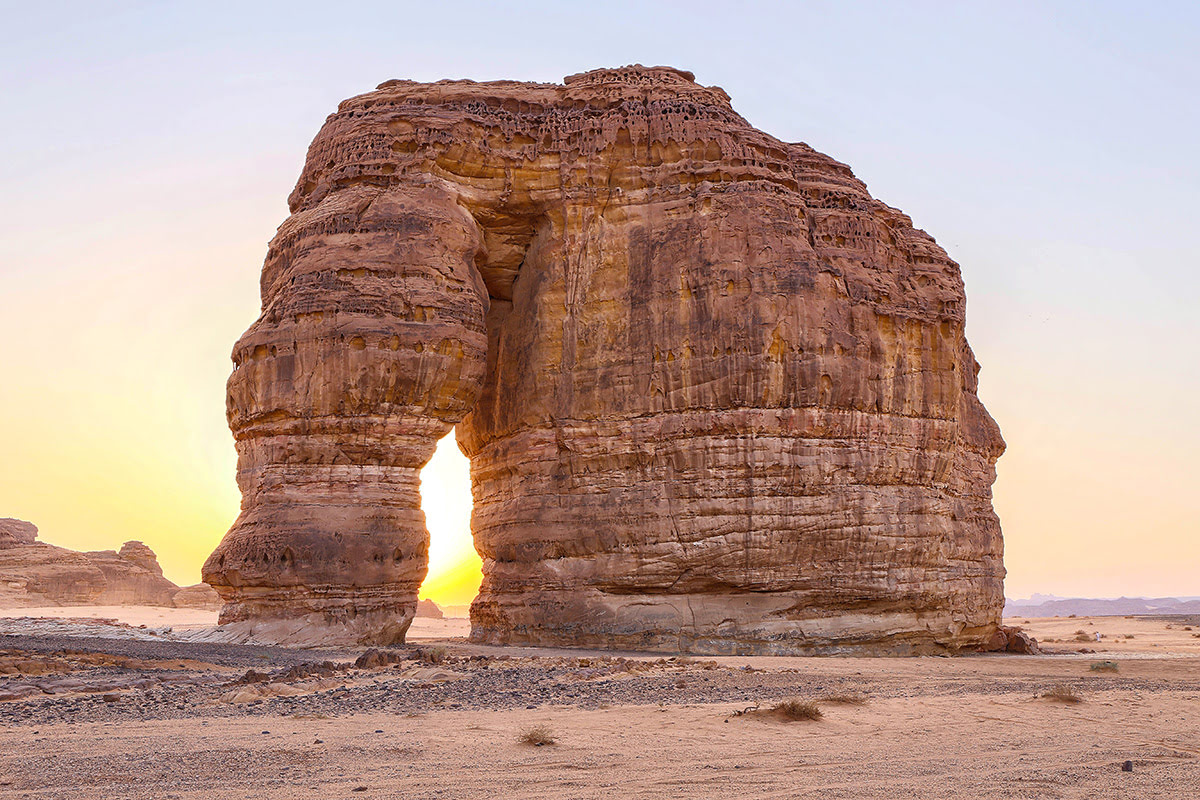 Last, but not least, nearby Elephant Mountain (sometimes called Elephant Rock) offers open views of ancient geological formations in the rolling sands of the Hejaz, or Western Province. The scenic region sits between Al Ula and Madain Saleh. Local guides are happy to take tourists to this area.

Check In to Al Ula Arac Resort, Step Out to Al Ula 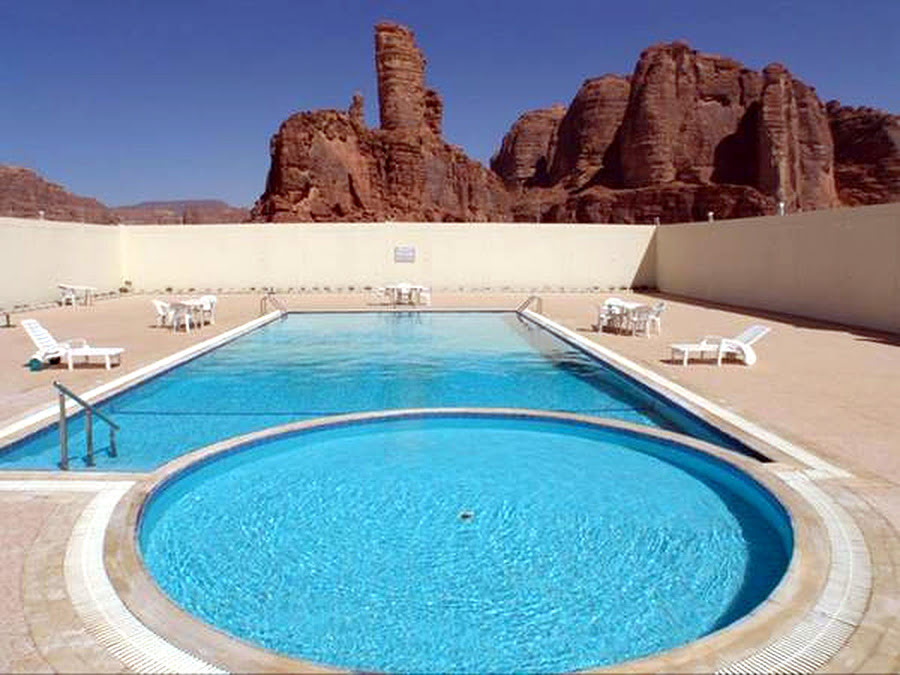 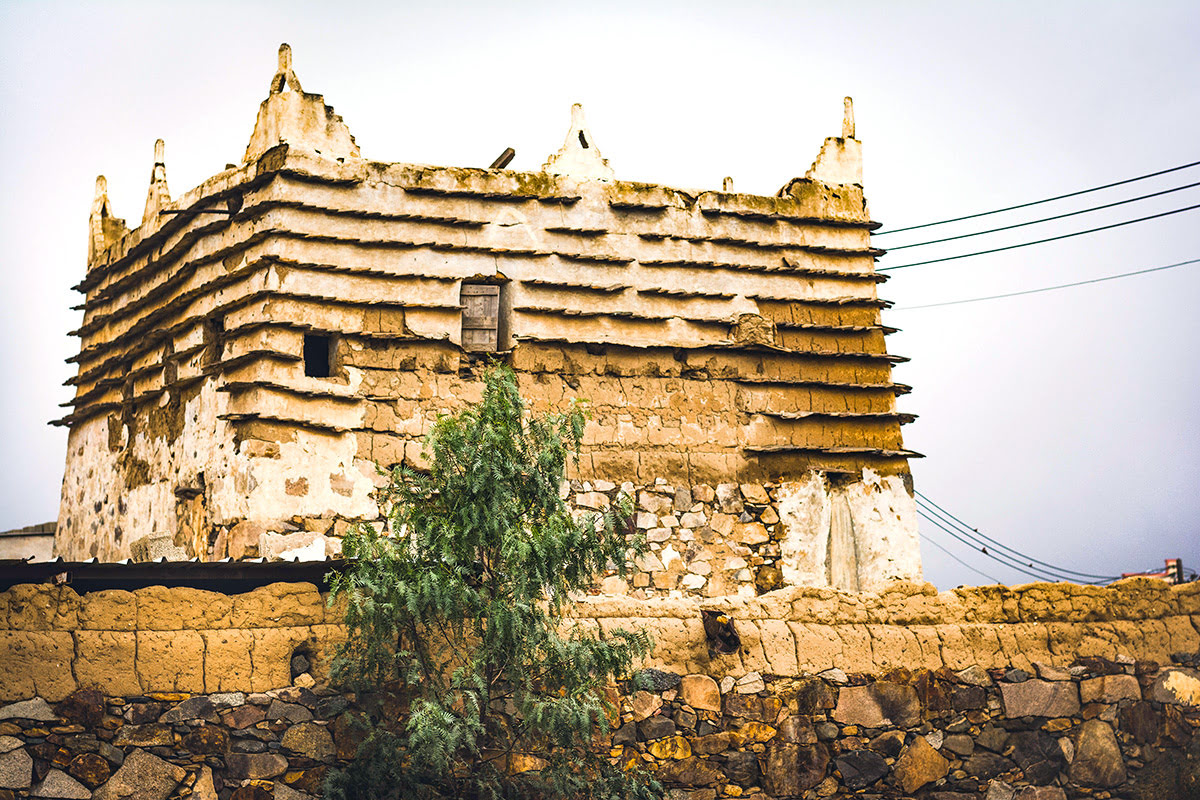 Go back in time in ASIR PROVINCE (ASEER REGION)

For a historic view of one of the most unique regions in Saudi Arabia, travelers should make plans to visit Abha in Asir Province. The city is renowned for its mountainous scenery and contrasting weather patterns, but it also is loved for its historic mudhouses. Some of the ancient dwellings stand more than three stories high, and many of the thick walls have been retained, allowing visitors to easily visualize how an ancient civilization once lived. Many of the houses are located on the outskirts of Abha, and while visitors are free to explore the site on their own, hiring a guide might be a better option for exploring these spectacular landmarks in Saudi Arabia. Local guides know the history of the houses and can elaborate on their construction, particularly the materials and techniques used to build them. 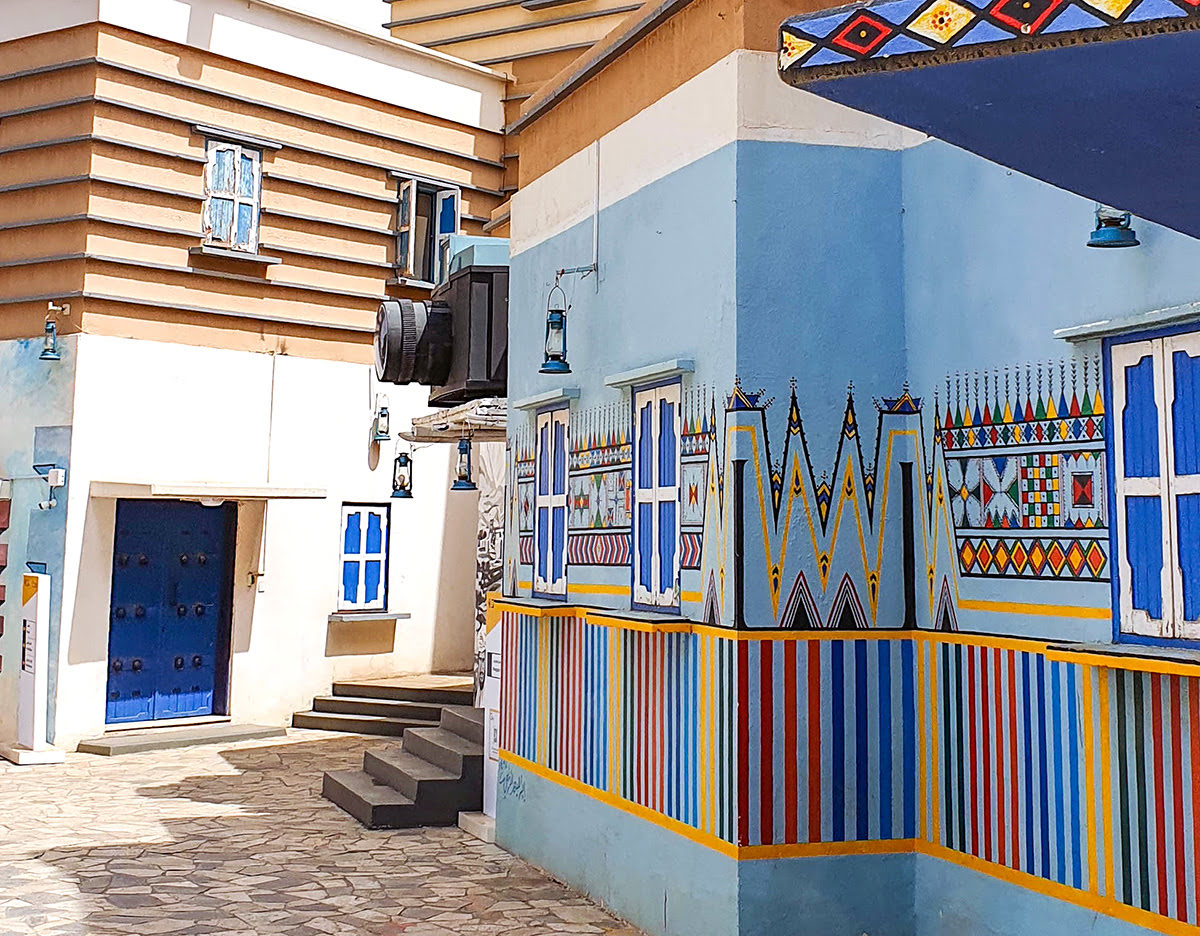 Al Muftaha Art Village, just outside Abha’s downtown core, is a dreamy encounter with new and old. The colorful art district features mural paintings and creative works by local art students, all in the cozy confines of a traditional village that dates to the mid-1700s. Visitors can stroll through the maze of buildings to admire the architecture, as well as the artwork, on the way to Muftaha Village and Traditional Market, where more paintings, handmade goods and local wares are sold. 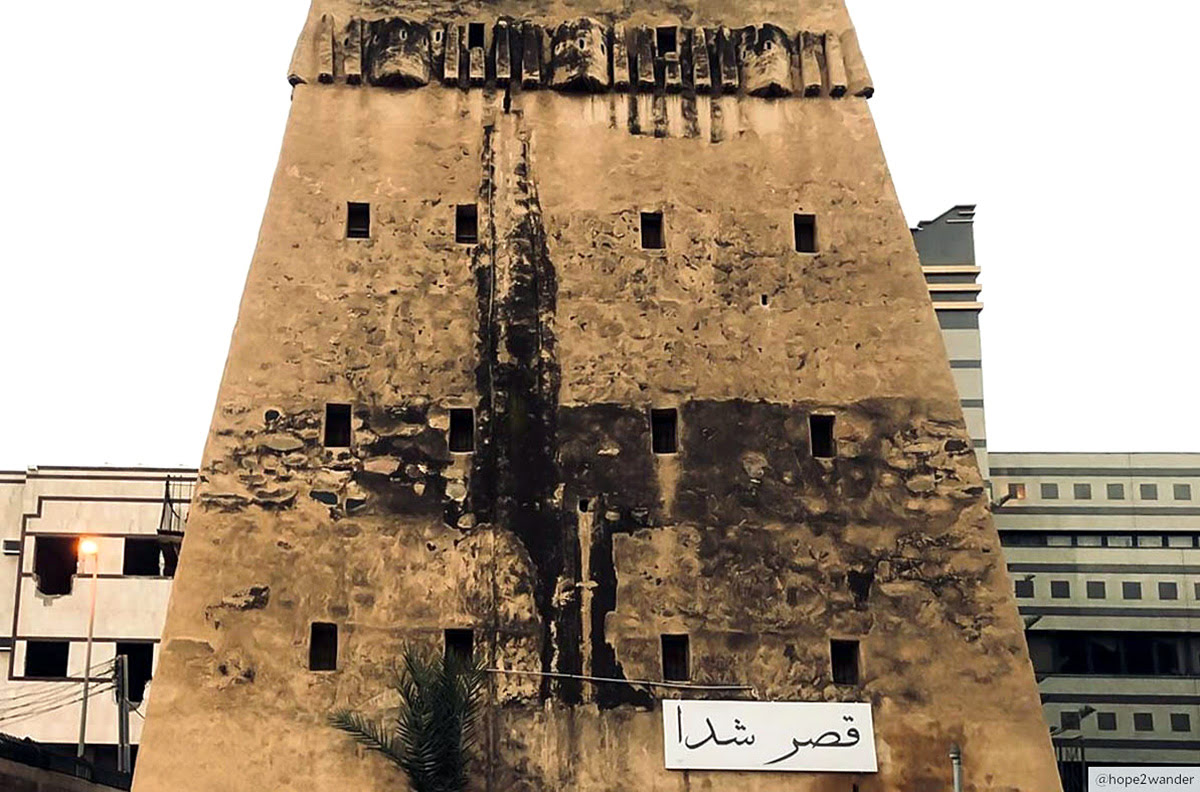 Shada Archaeological Palace is just a 15-minute walk from Al Muftaha Art Village and should be included on any historic tour of Abha. The former main ruling palace in Abha has been converted into a museum and now displays a selection of home furnishings and equipment once used in the facility. Visitors can climb to the top of the mud-walled tower for a view of downtown Abha. Also notable is the fact that the entire tower was built with few windows to ensure the safety of the governor who lived there. 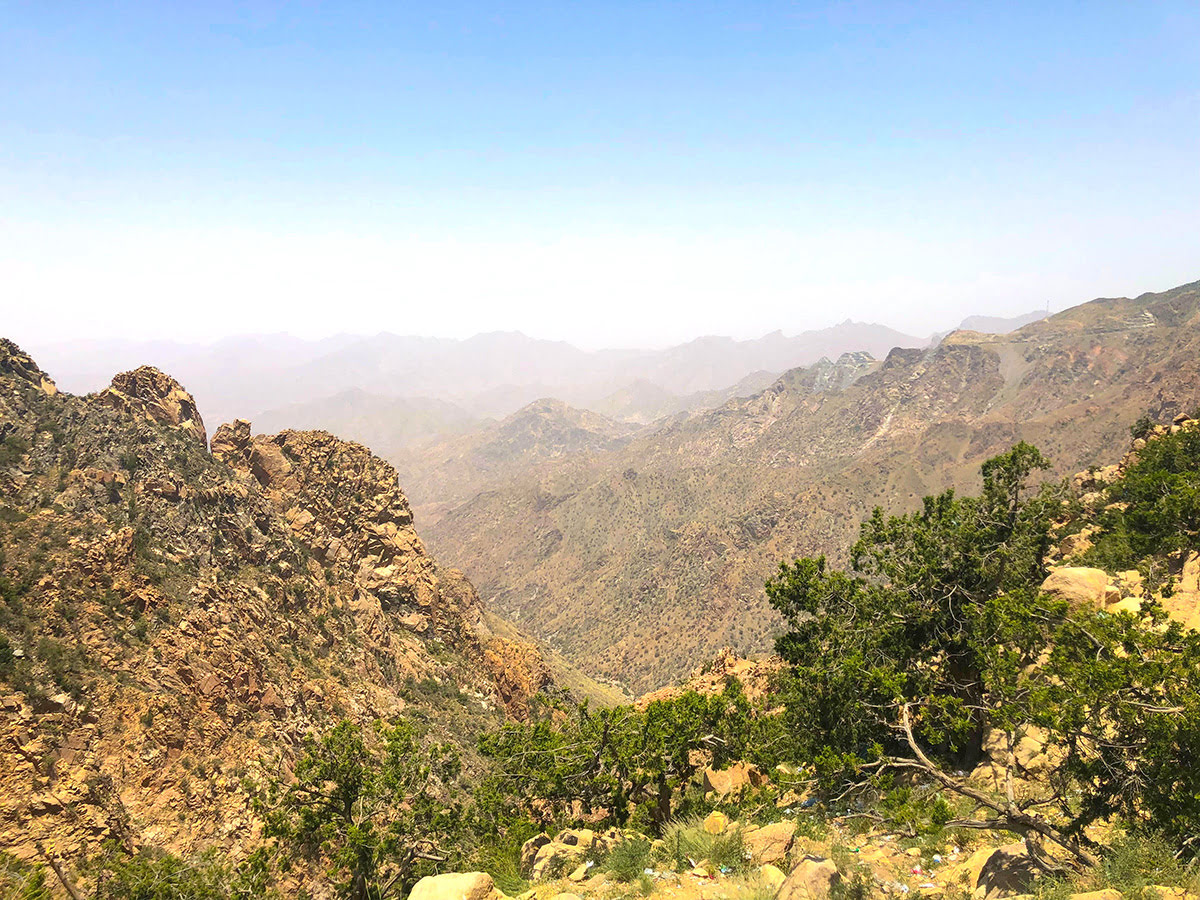 Jabal Sawda (Jabal Al Soodah) is one of the most prominent landmarks in Saudi Arabia and places to visit in Abha, as it marks the country’s highest peak. The mountain stands just under 10,000 feet in scenic Al Soudah National Park, a great place for hiking in the Kingdom. Tourists who don’t care to trek to the top can board a cable car in Abha or on the north side of Al Soudah National Park.

Check In to Shafa Abha Hotel, Step Out to Abha 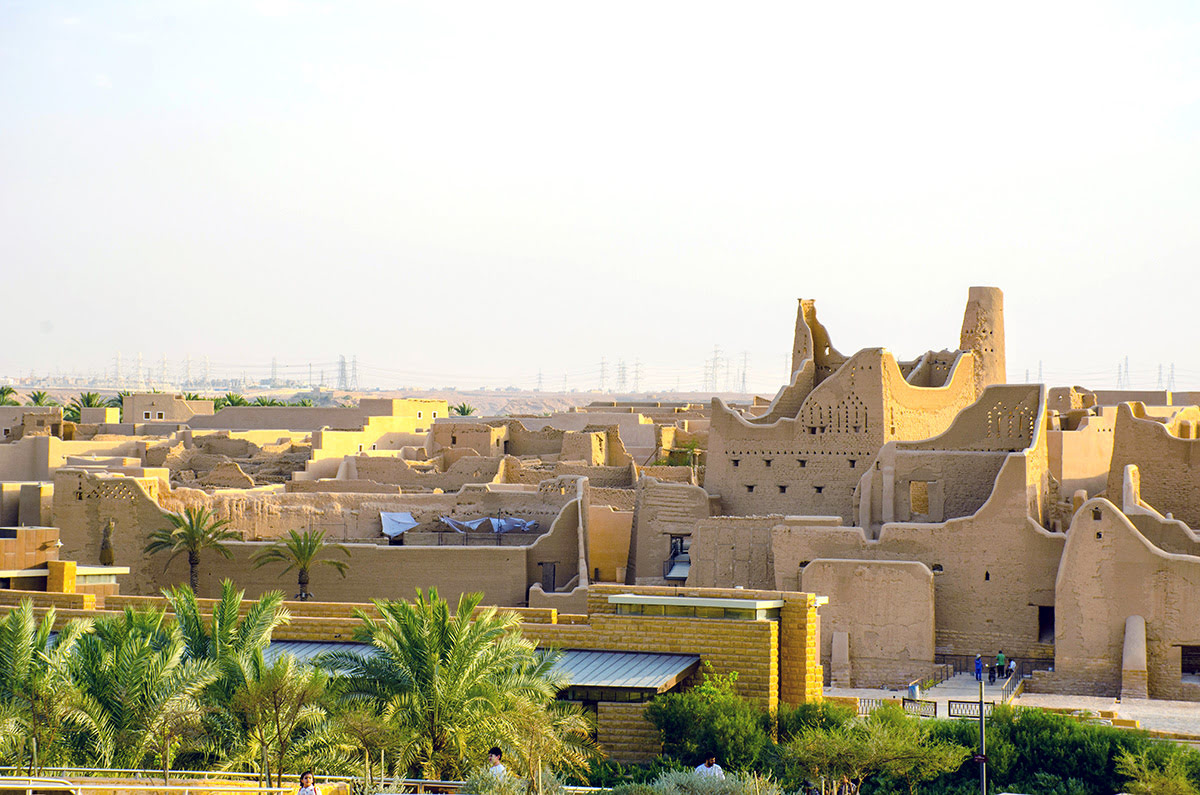 Take a historic tour in the capital city of RIYADH

Saudia Arabia’s capital city of Riyadh is home to some of the country’s dearest historic sites. Visitors can easily get a feel for the Kingdom’s history, traditional architecture and culture by touring Riyadh landmarks alone. Travelers willing to step outside the city, however, will find more ancient treasures, like historic Ad Diriyah, Ushaiqer Heritage Village and even … the Edge of the World!

Murabba Historical Palace is one of Riyadh’s standout historical landmarks. The palace is the former home of the king and was built in Najdean style. Visitors will get to view personal items, memorabilia and photographs of the king as well as stroll through manicured gardens that surround the palace. Also on display is the king’s Rolls-Royce, which he received in 1946 as a gift from English Prime Minister Winston Churchill. 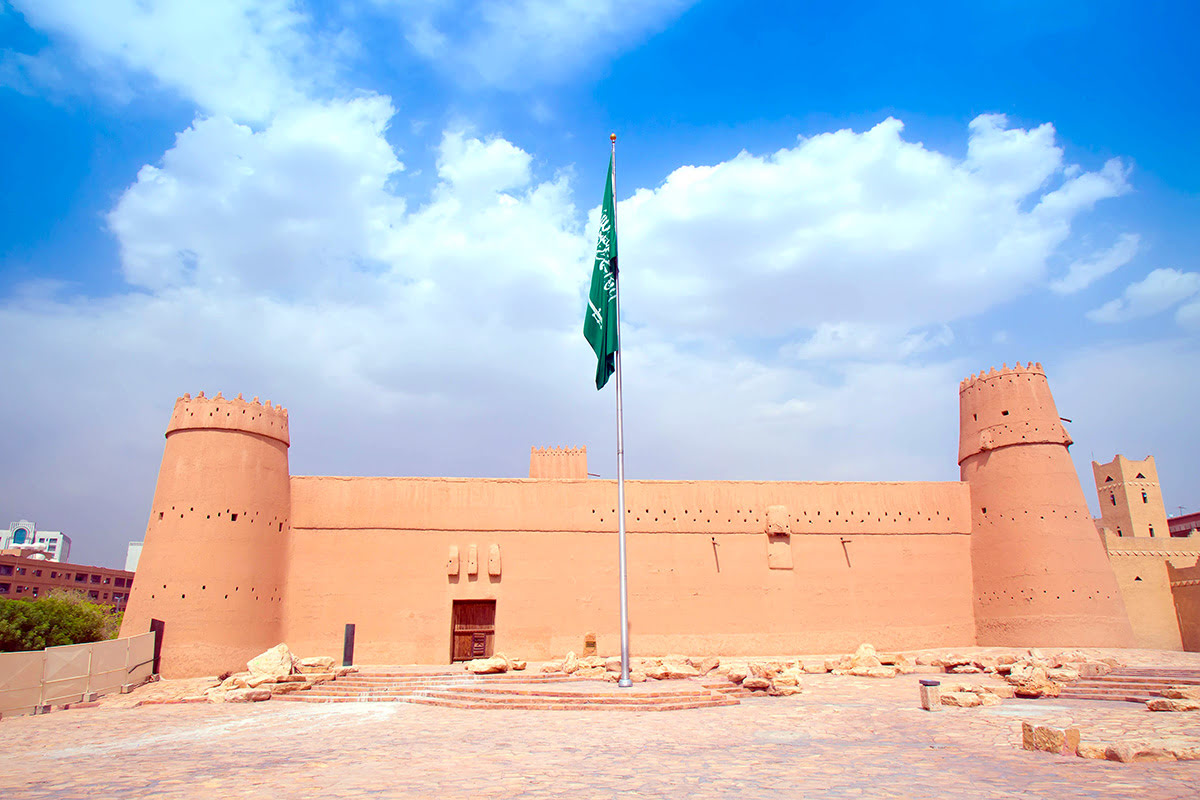 Masmak Fortress can be found just a short drive south of Murabba Historical Palace. The former garrison which once protected the city is famous for its mud-brick and clay exterior. The massive complex later served as a storehouse for ammunition, and after a 1902 raid by Ibn Saud, the fort was used as a prison. 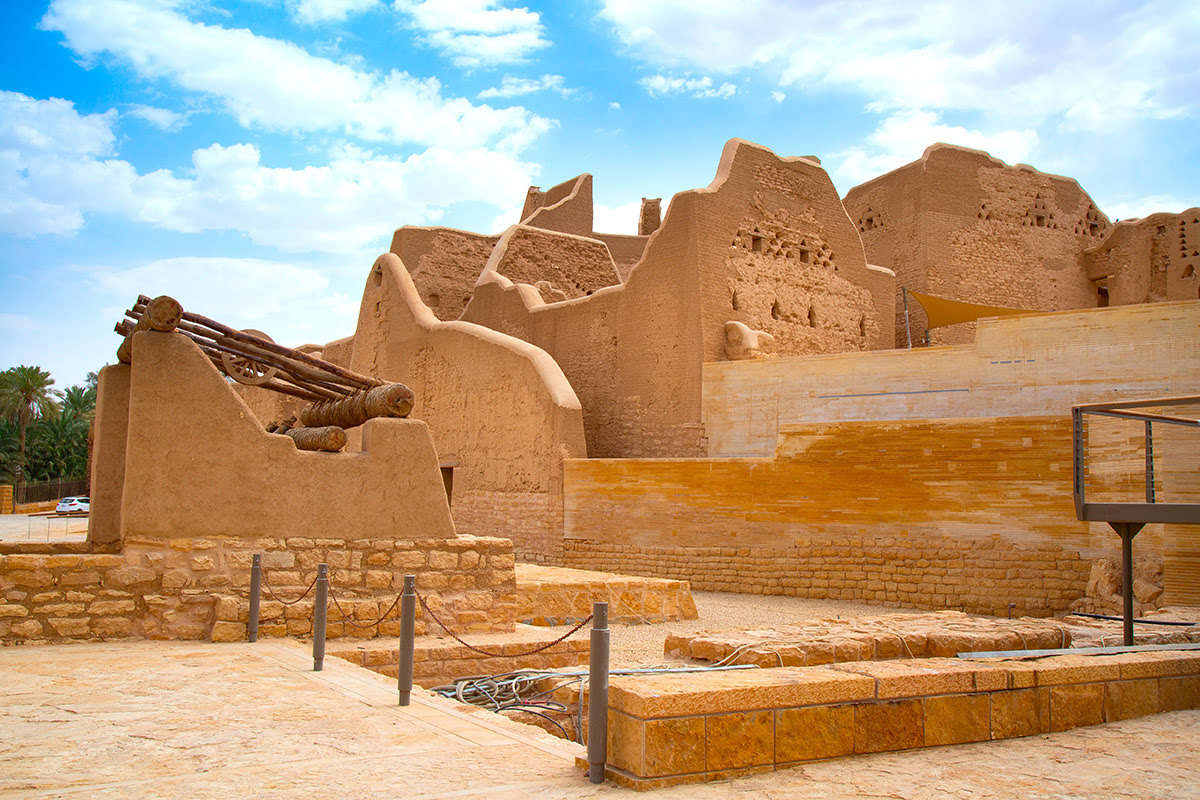 The historic city of Ad Diriyah lies on the western outskirts of Riyadh and is one of the most well-known UNESCO World Heritage Sites in the country. The city once served as Saudi Arabia’s capital and housed the Al Saud family. Tourists will find both a modern and historic side to the city. The modern side features trendy cafés, restaurants and gift shops, and visitors can cross a bridge over Wadi Hanifah road to reach the Al Turaif District, which contains the ancient royal quarters, Diriyah Museum and more historic remnants of Ad Diriyah. From Al Turaif, visitors have direct access to the Al Bujairi district, which is being transformed into a modern hub packed with art galleries, museums, mosques and market areas.

Travel tip – Ad Diriyah is undergoing major renovations in preparation for the influx of tourism expected to the Kingdom. The area is still open for tours, but guests should be aware that some attractions may have limited access. 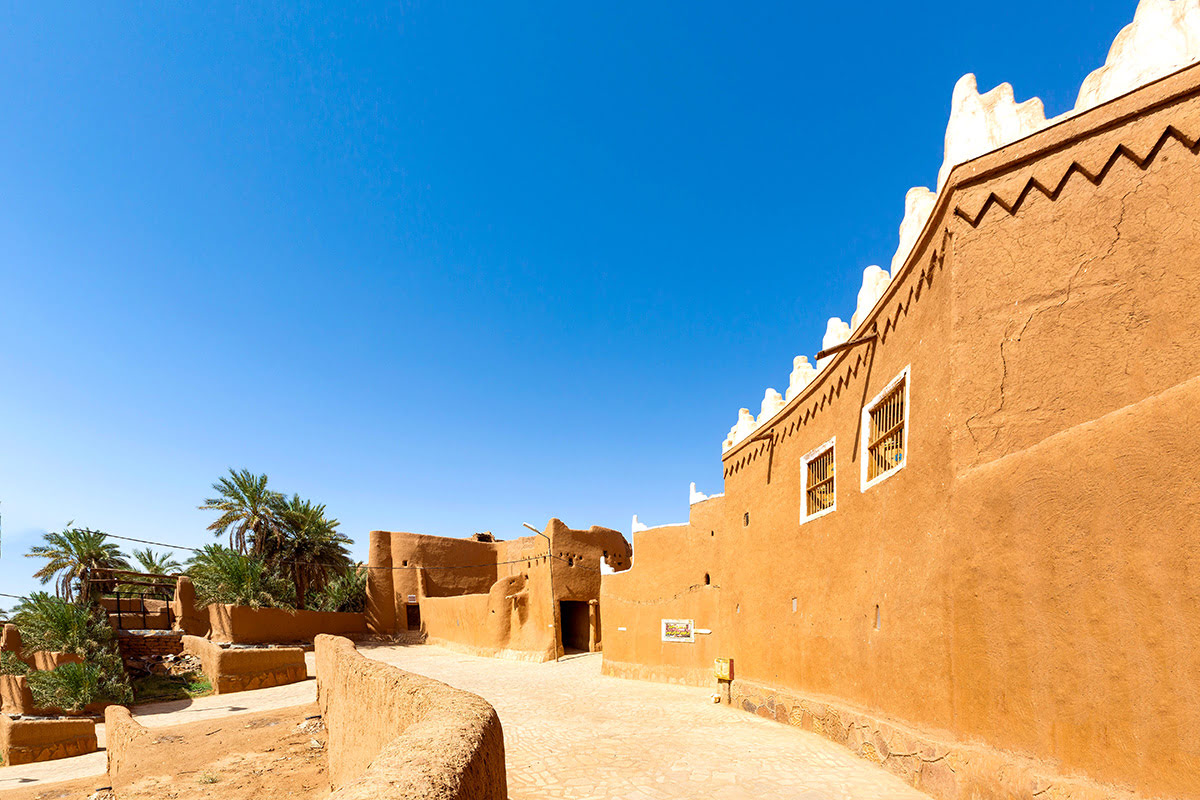 Ushaiqer Heritage Village is about a two-and-a-half-hour drive northwest of Riyadh and is one of the best historic landmarks in Saudi Arabia. The walled village is incredibly preserved and contains about 400 mud houses and 25 mosques. Guests can meander through the village at their own pace to admire the insides of selected homes, inscriptions on door frames and palm grove orchards dotted throughout the seven districts of the village. Ushaiqer Heritage Village contains everything travelers need for a satisfying visit. Besides the historic village itself, Ushaiqer features a museum, a marketplace and restaurant, mosques, local tour guides and lodging for guests who want to spend the night. 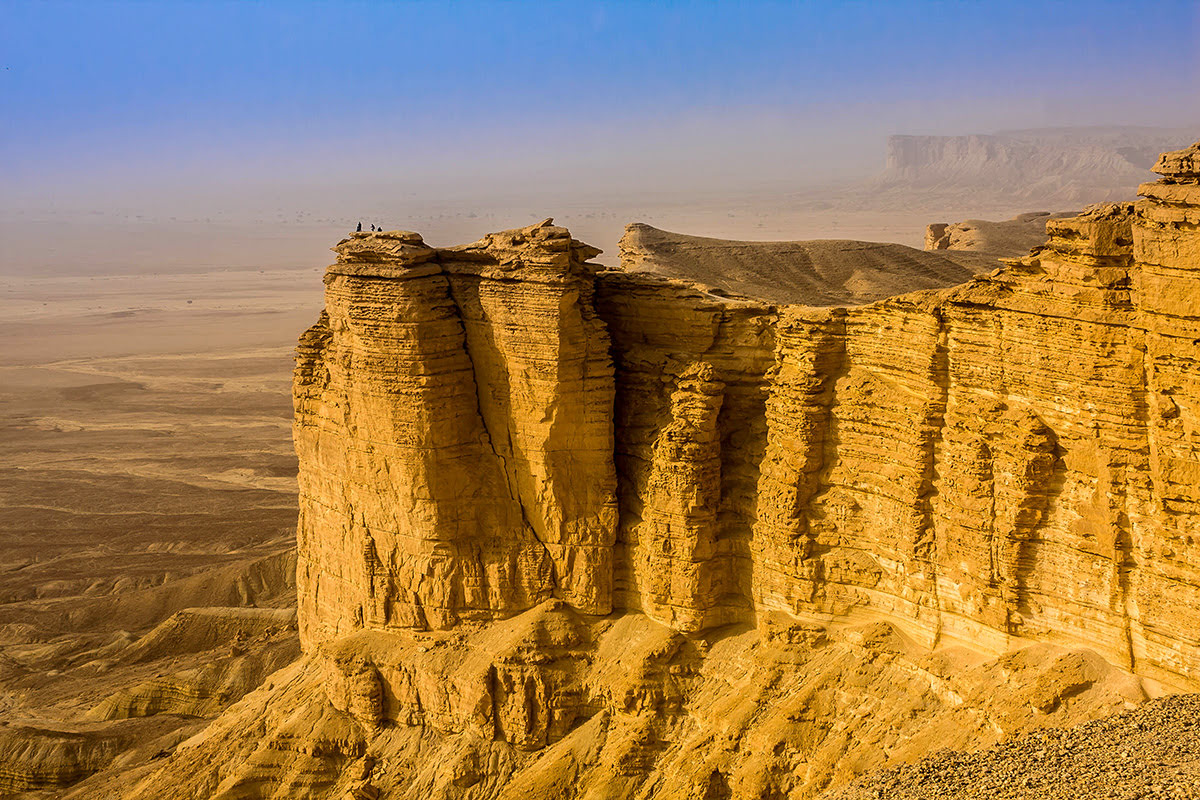 Edge of the World makes for another excellent daytrip from Riyadh, and seeing this historic – and unbelievable – landmark in the middle of the desert is an absolute must. The gateway to the incredible formation is about two hours northwest of Riyadh, and travelers who go early enough can pair the excursion with a trip to Ushaiqer Heritage Village. (Though, some trekkers like to spend the whole day at Edge of the World.) The monumental natural rock formation lends endless views of Acacia Valley in the Tuwaiq Escarpment.

Travel tip – Trekkers should be prepared when visiting Edge of the World: pack plenty of water, food and sunscreen, and always wear protective clothing, as shady spots are nowhere to be found at the Edge of the World. Oh, and the gate closes at 6 p.m., so hikers should factor in two hours of driving time to get back to the gate.

Check In to Boudl Al Malaz Hotel, Step Out to Riyadh 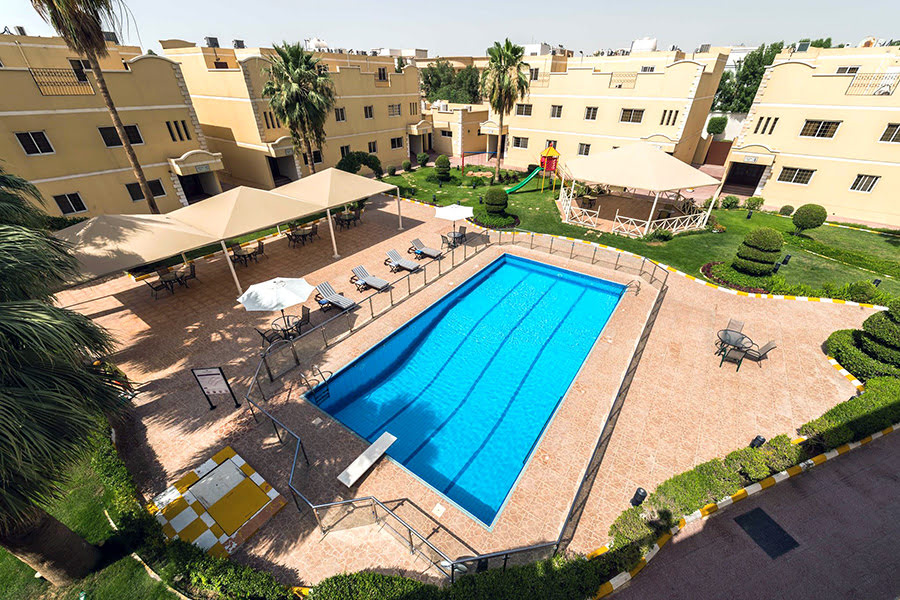 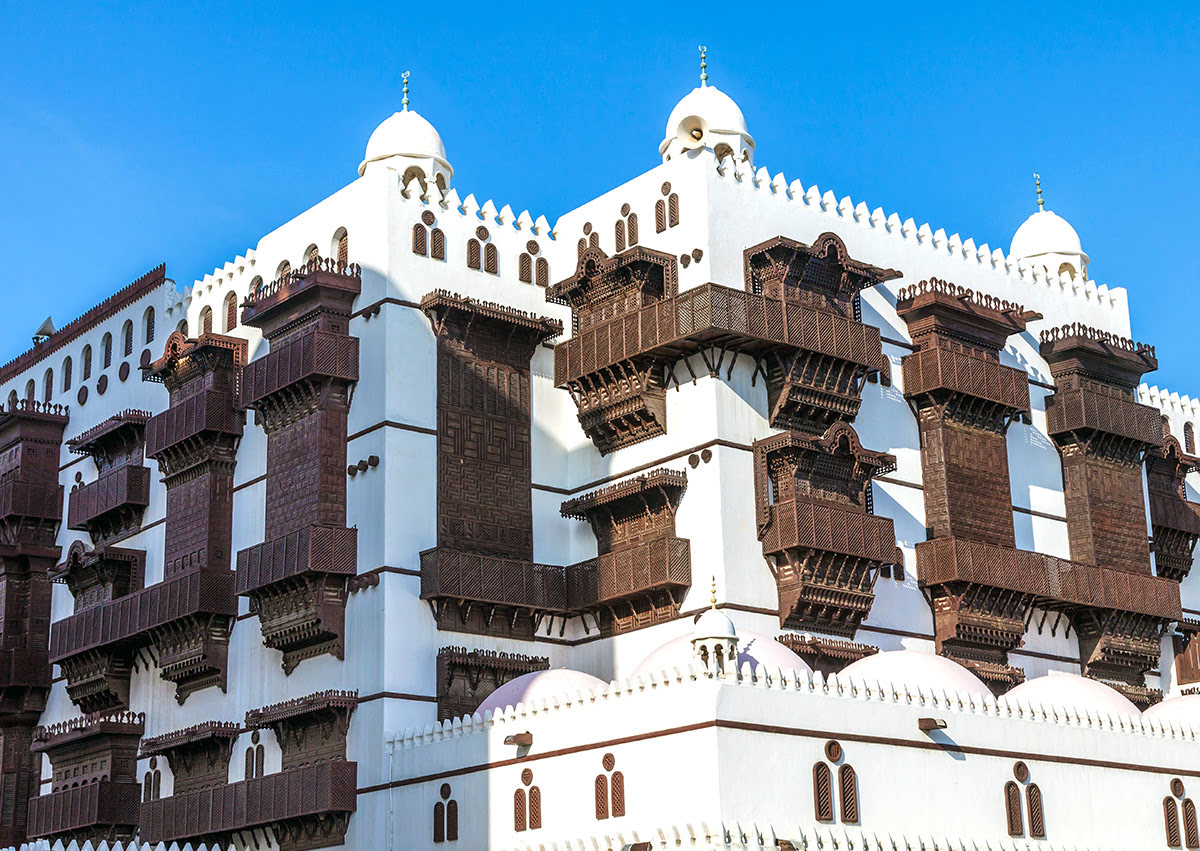 Travelers wanting to learn more about Middle Eastern architecture and culture should plan a visit to Al Tayebat International City in Jeddah. Not only is the walk-through museum an incredible display of architecture, but it also houses some of the most fascinating artifacts in the country. The private facility showcases period furniture, currency, ancient weapons and fantastically-preserved Islamic manuscripts. The museum also exhibits replica homes from every region in Saudi Arabia.

Check In to Mena Airport Hotel Jeddah, Step Out to Jeddah 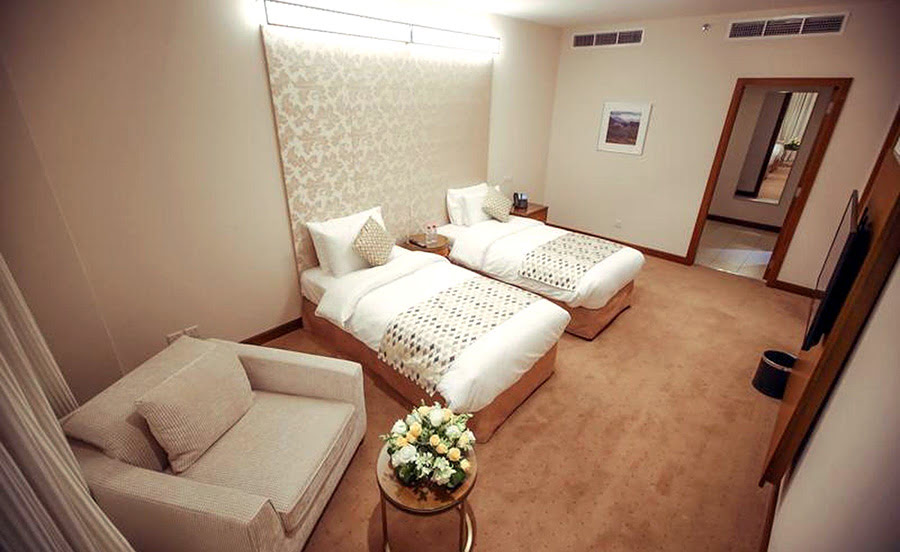 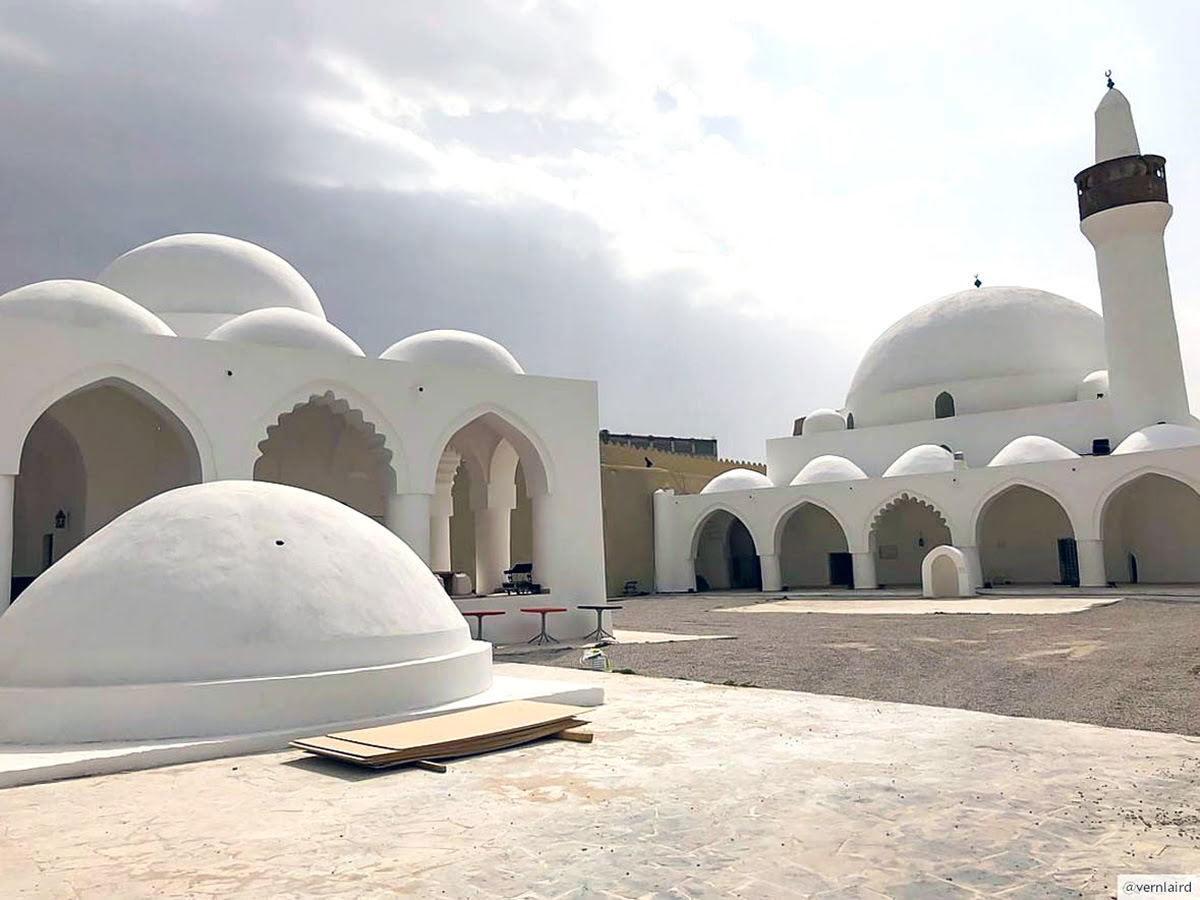 On the southern edge of Al Hofuf travelers will find the historic community of Al Ahsa. Known as an oasis in the desert, the village was one of the first populated areas in the region known as the Empty Quarter. The area was a vital stopping place for travelers making their way to Mecca from the east. The site contains rich archaeological remains as well as about two million palm trees which yield more than 100 thousand tons of dates each year. 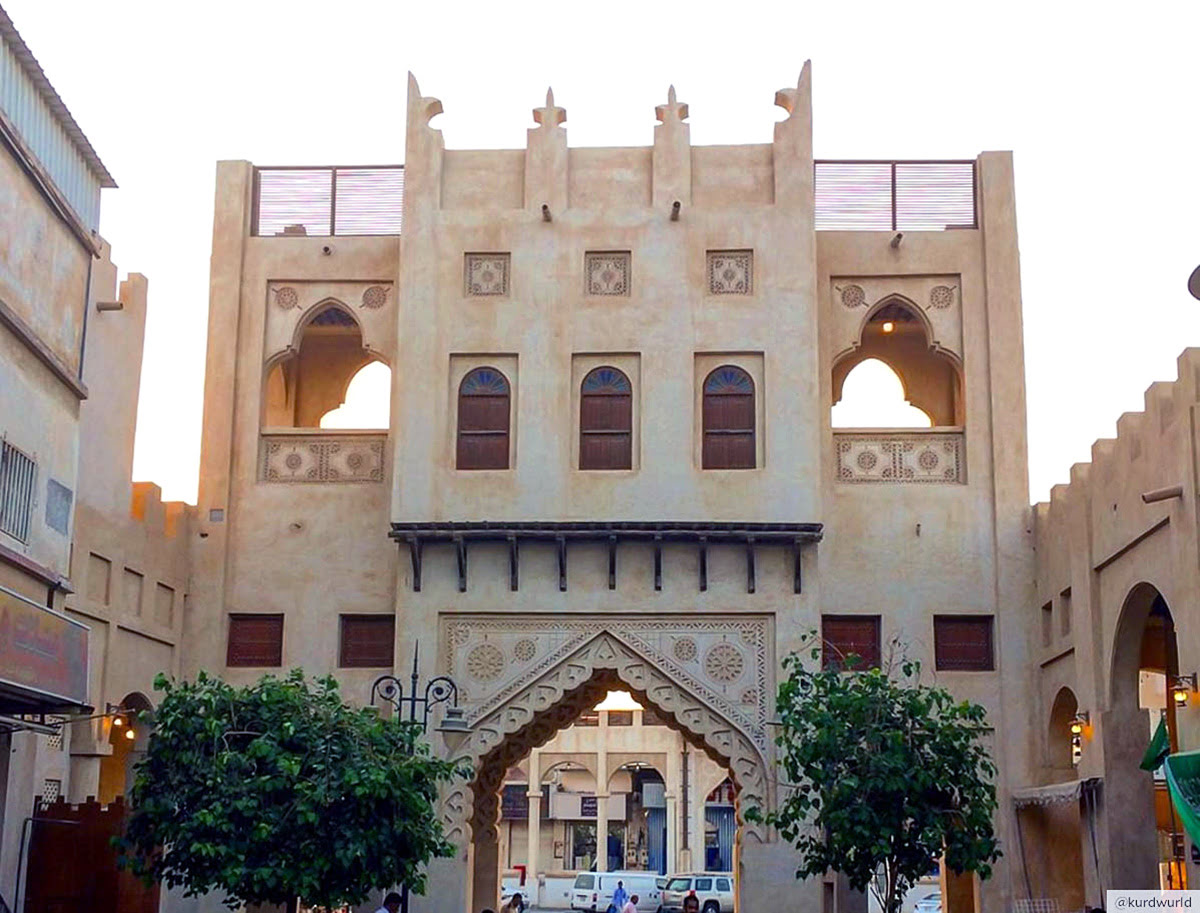 While in Al Hofuf, visitors must do some souvenir shopping at Qaisariah Souq. The market was founded in 1822 and remains the oldest market in Saudi Arabia today. More than 400 shops line the winding, ancient streets of the souq, and the marketplace is within walking distance of several other landmarks in the historical center of Al Hofuf, including Ibrahim Palace, House of Allegiance, the Al Hofuf Fish Market and Qubba Mosque. 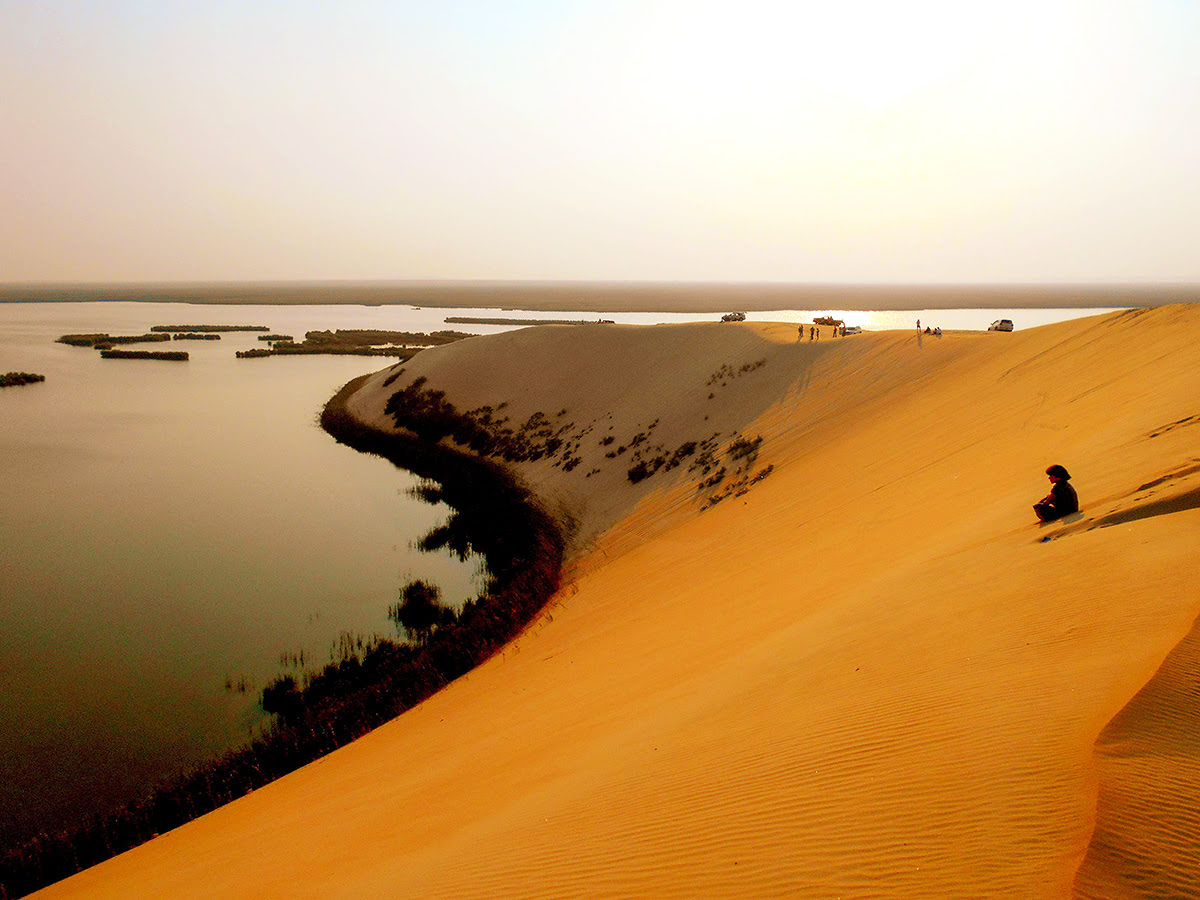 A trip to Al Ahsa and Al Hofuf would not be complete without a daytrip to Yellow Lake. Located on the north side of Al Ahsa National Park, Yellow Lake is the result of the water runoff that feeds more than 22,000 farms in the region. The serene area can only be reached by SUV, and visitors must find a local guide to take them, but the extra planning is extremely rewarding. Yellow Lake offers shady spots for picnicking, secluded areas for trekking and divine spots for birdwatching. 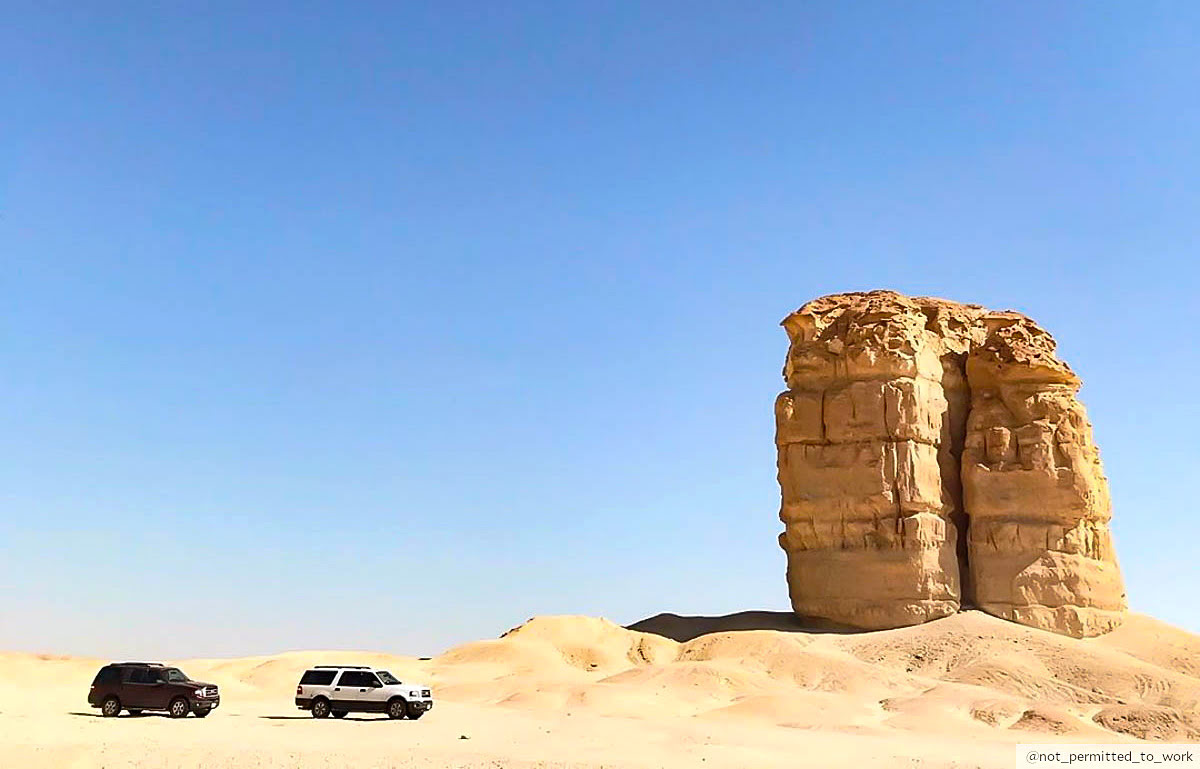 Devil’s Thumb is a fun attraction to see and allows visitors to explore desert regions as well as rural communities like Judah, located about an hour and a half northwest of Al Hofuf. Guests can join a day tour to visit Devil’s Thumb, a geological formation that protrudes (awkwardly) from the middle of the desert, traverse nearby escarpments full of caves and rock formations and see camels caravanning through the desert. Some tours offer overnight stays with Bedouin-style camping. The experience is highly recommended, especially for stargazers who appreciate crystal clear views of the twinkling night sky.

Check In to Garden Plaza Hotel, Step Out to Al Hofuf 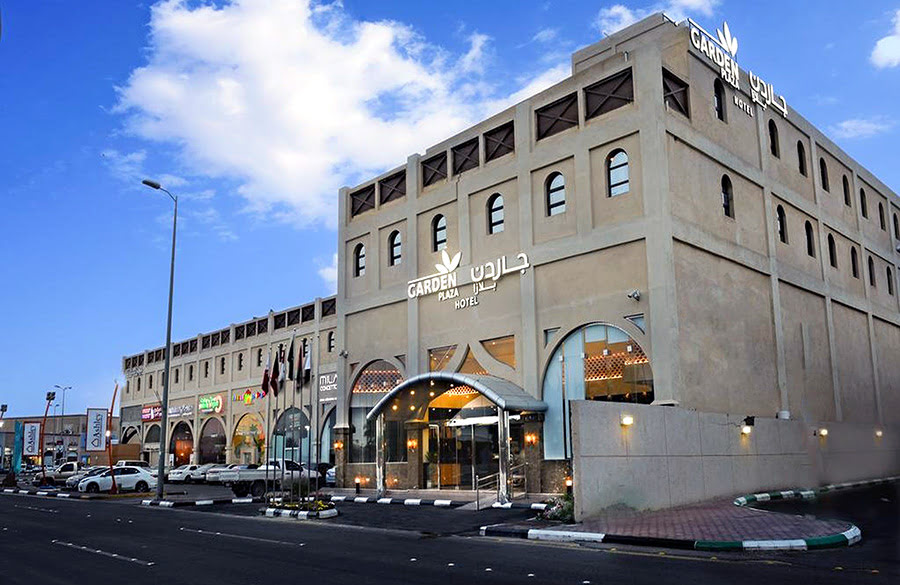