Bangkok Landmarks: 5 Places to Photograph on a Sightseeing Tour

Bangkok landmarks are everywhere! Between ancient shrines and temples, historic monuments and out-of-this-world architecture, sightseeing in the City of Angels is never-ending. International tourists flock to Bangkok for its diversity as well as its unique history, and lucky for them, some of the city’s most popular attractions are located right near the Grand Palace. Follow this easy guide for a walking tour that is not only convenient but also totally monumental! 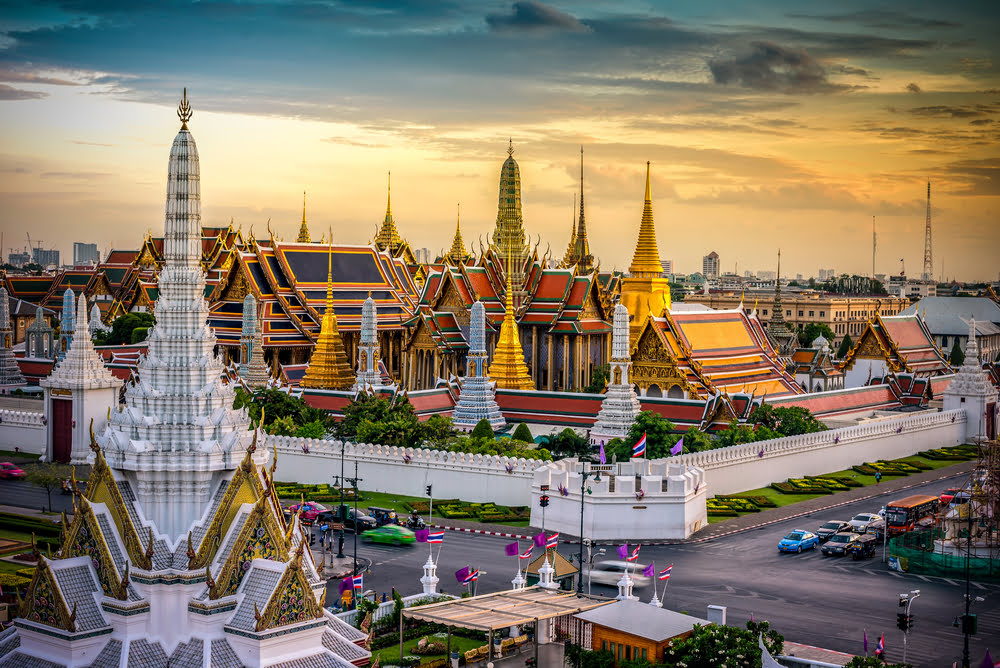 1. Discover rich history and an emerald Buddha at WAT PHRA KAEW (THE TEMPLE OF THE EMERALD BUDDHA) at the GRAND PALACE

View the most deeply-revered religious artifact in Thailand at Wat Phra Kaew, The Temple of the Emerald Buddha. Part of the Grand Palace complex, the temple houses a 15th-century statue of Buddha in a standing, meditative position. The ancient relic is carved from a single jade stone and is believed to protect the entire country. Wat Phra Kaew is known as the most sacred Buddhist temple in all of Thailand.

Check In to Aurum The River Place, Step Out to Wat Phra Kaew (The Temple of the Emerald Buddha) 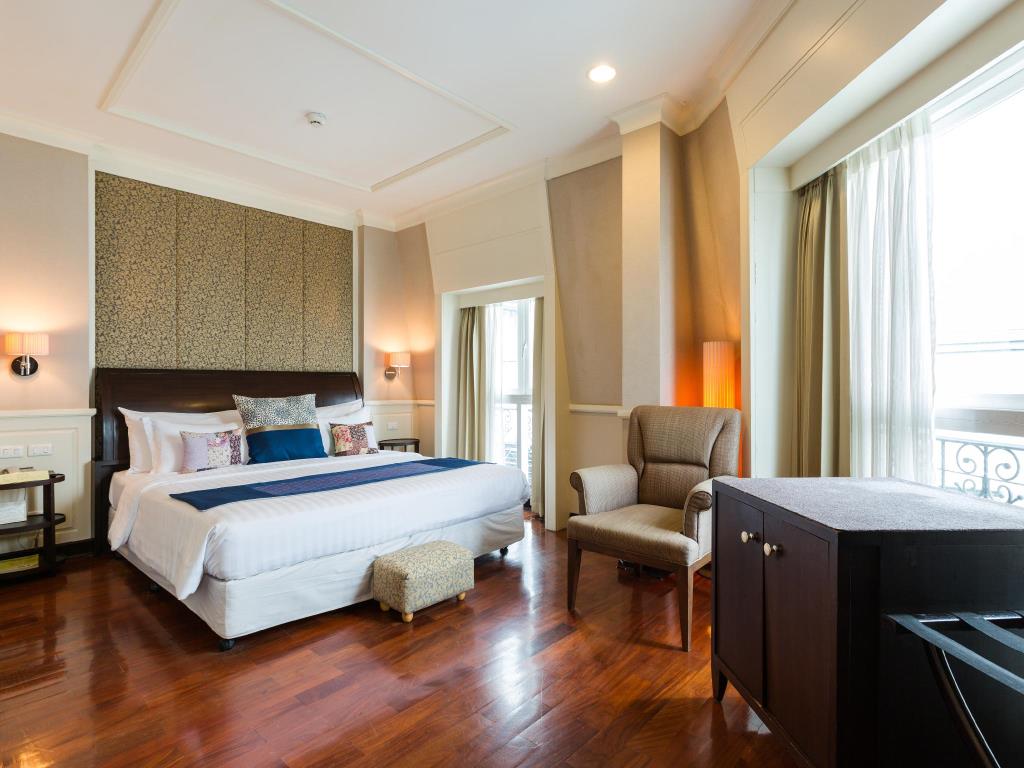 Discover more hostels and guest houses near the Grand Palace 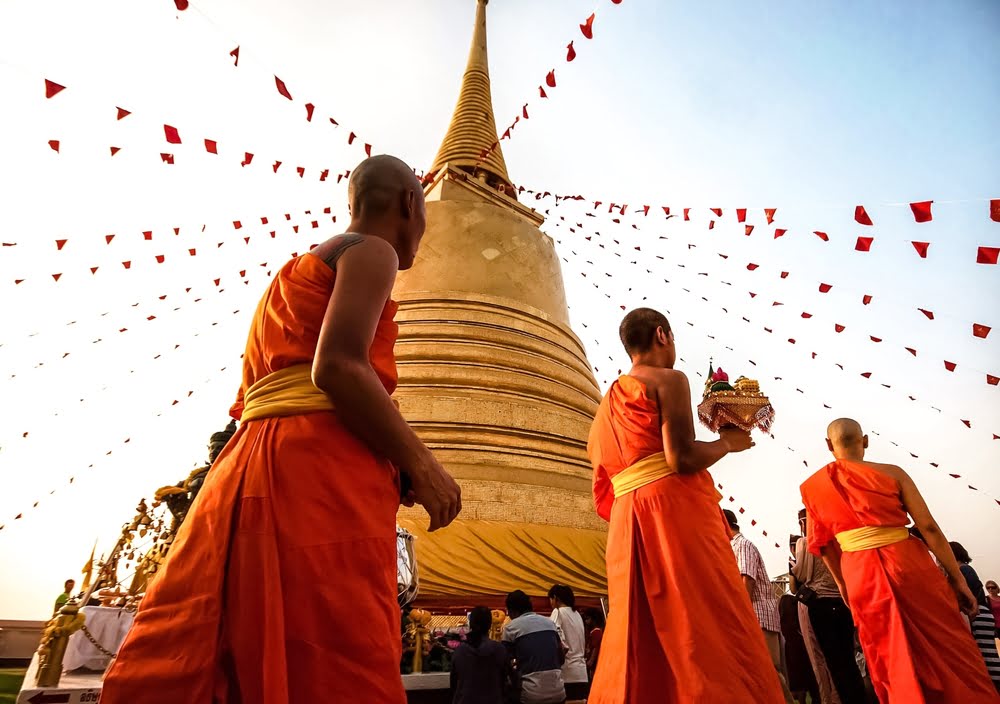 2. Sop up a glorious view from atop WAT SAKET (THE TEMPLE OF THE GOLDEN MOUNT)

Known best for its 80-meter-high “Golden Mount,” Wat Saket – or Golden Mountain Temple – dates back to the Ayutthaya era and once claimed the distinction of being the highest point in Bangkok. The original structure actually collapsed decades ago, but modern-day kings ordered the temple to be restored, and religious artifacts, like a chedi on top of the hill and a relic of Buddha from Sri Lanka, have been added to the grounds during past decades. Visit the temple in November to watch religious leaders and locals make a candlelight procession up the mountain, which has become a popular tourist attraction as well as a religious beacon for the city.

Check In to Lamphu Tree House Boutique Hotel, Step Out to Wat Saket (The Temple of the Golden Mount) 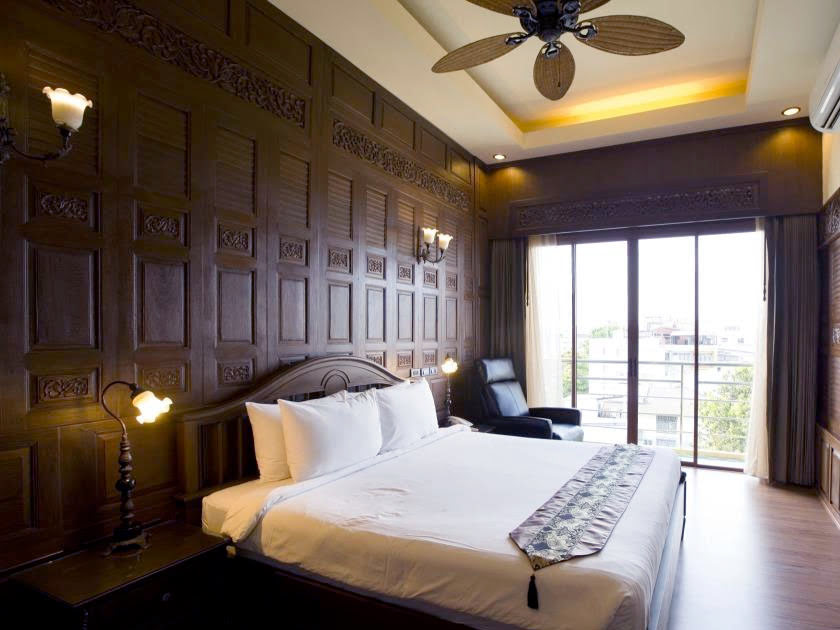 3. Relish twinkling architecture during a river cruise past WAT ARUN (THE TEMPLE OF DAWN)

Adorned with incredible shards of sparkling porcelain and seashells, Wat Arun is perhaps Bangkok’s most picturesque and stunning landmark. Situated on the banks of the Chao Phraya River, the “Temple of Dawn” is best known for its magical glimmer during first light. At night, however, the masterpiece’s magnificent spires reflect off the Chao Phraya, providing a spectacular view during a night cruise. Architecturally, the temple represents Mount Meru, or the center of the world. Visitors can tour the complex for a small fee during daytime hours. Appropriate dress is required and can be rented on the temple grounds.

Check In to Inn A Day, Step Out to Wat Arun (The Temple of Dawn) 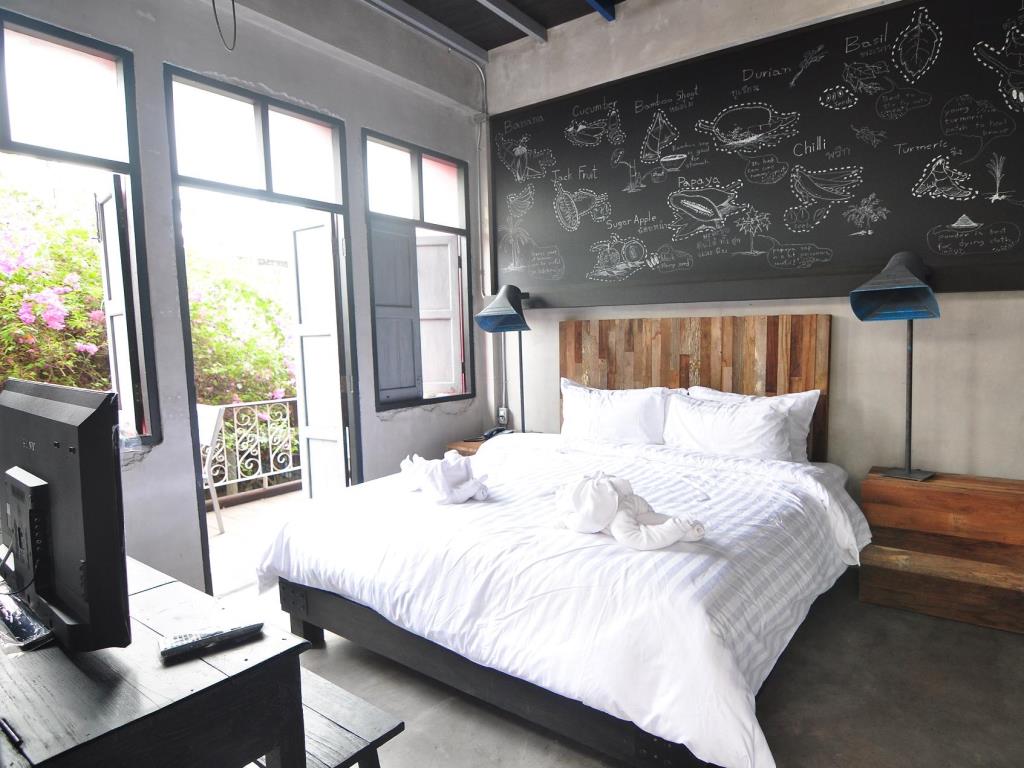 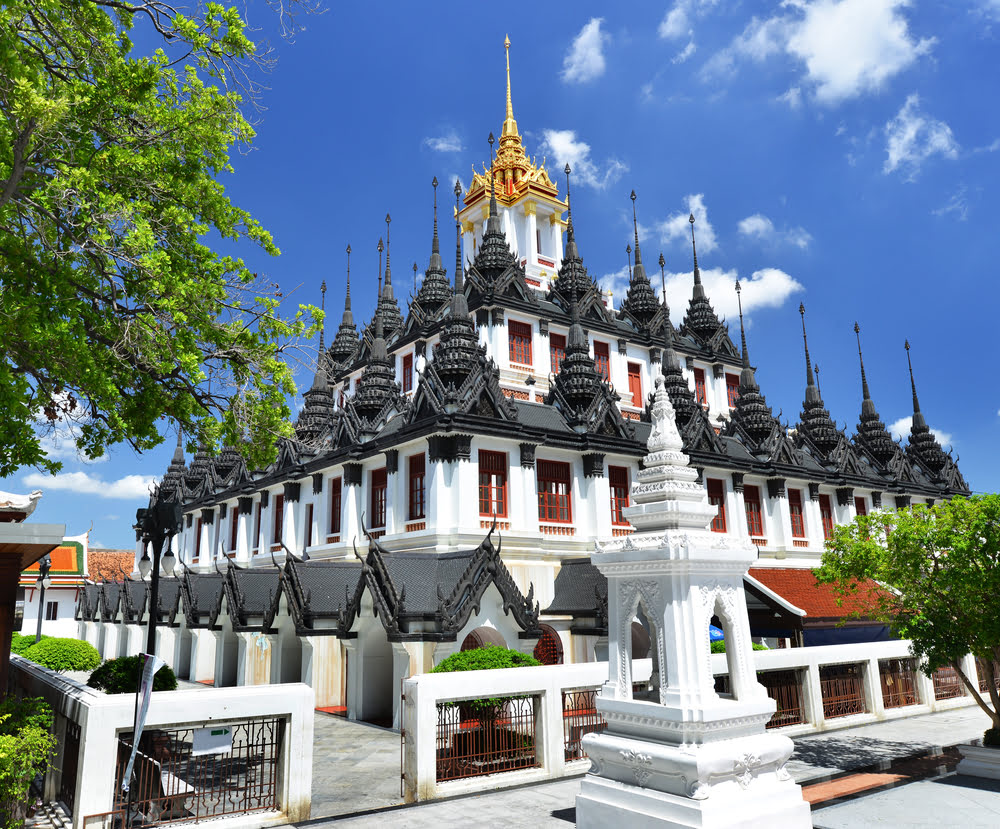 View masterful architecture at a temple built during the mid-19th century for a royal granddaughter. Regarded as the only bronze-roofed temple of its kind, “Loha Prasat,” meaning iron castle or iron monastery, features five towers and 37 metal spires which represent the 37 virtues required to reach enlightenment. Visitors are welcome to tour the compound, which is well labeled with informative displays and historical information. The temple was submitted in 2005 as a UNESCO World Heritage Site and remains a consideration for the distinction.

Check In to Golden Mountain Hostel, Step Out to Khao San Road 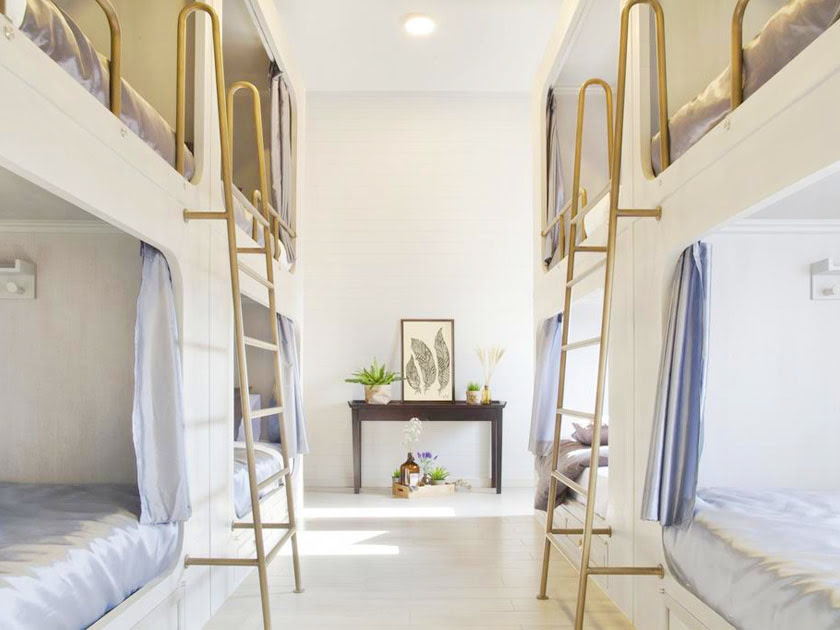 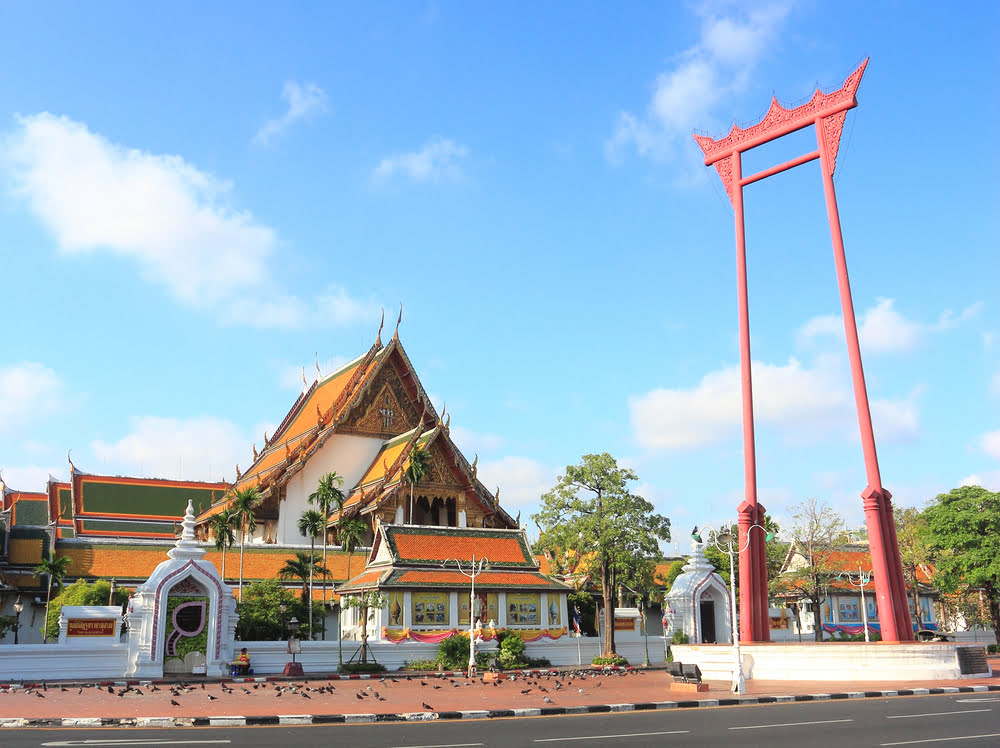 5. Take a selfie at the GIANT SWING at WAT SUTHAT

Daring men haven’t swung from the giant structure since the early 1930s, but the Giant Swing that towers in front of Wat Suthat still stands as a reminder of ancient Brahmin ceremonies. Take a selfie in front of the 24-meter-tall attraction and then spend some time admiring the unique architecture of the temple’s Grand Hall, as well as the impressive City Hall building, just across the street.

Check In to Bangkok Bed and Bike, Step Out to Wat Suthat (Giant Swing) 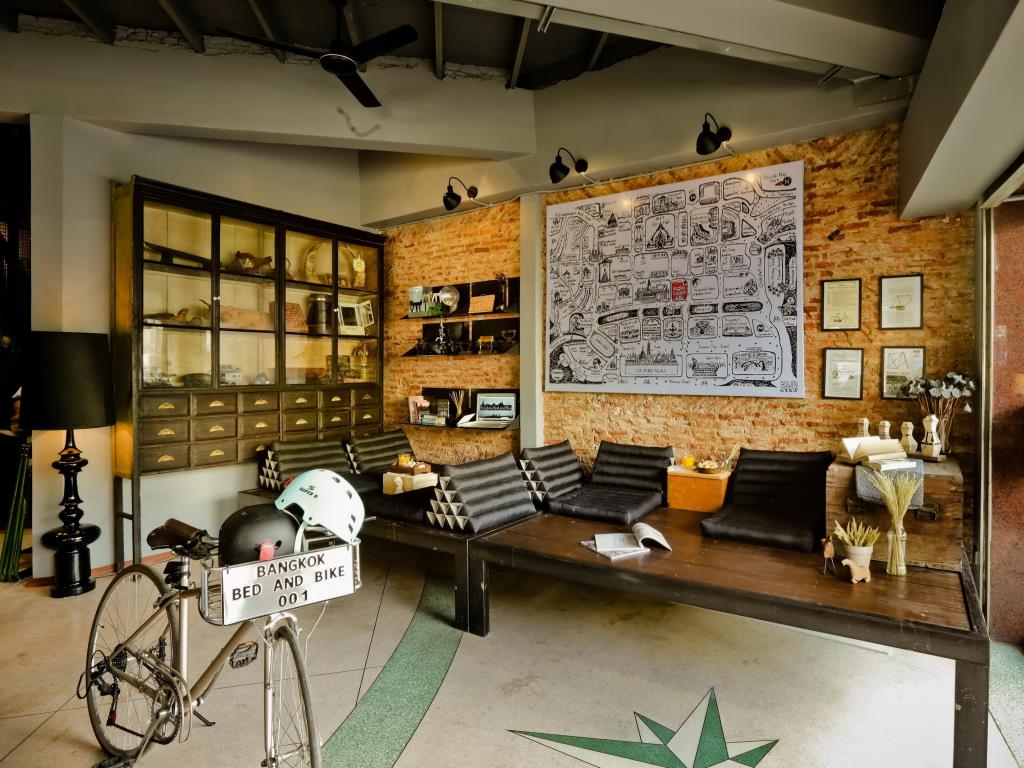