Things to Do in Kyoto | Guide to Japan’s Shrines, Castles & Geisha District

Home to 17 UNESCO World Heritage Sites, Kyoto is a modern city that is steeped in history, so things to do in Kyoto are easy to find! In addition to religious sites like Fushimi Inari Shrine and Sanjyusangen-do Temple, visitors to Kyoto will want to make sure to visit some of the many imperial historical sites like Nijo Castle, which was built in 1603. It’s not all about the ancient past, though. Kyoto offers plenty of modern delights like Michelin-starred restaurants, luxury hotels and a cutting-edge rail system that makes it a breeze to get around the city. 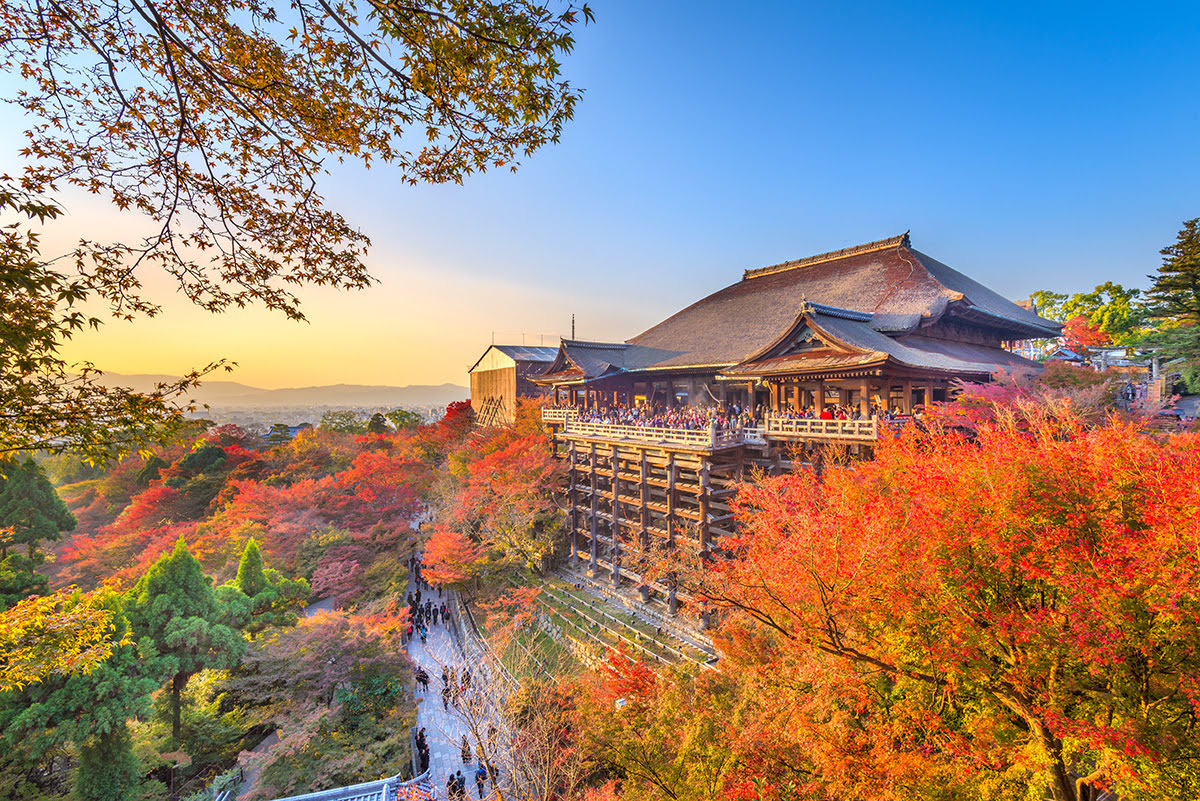 One of Kyoto‘s best known UNESCO World Heritage sites is Kiyomizu Temple. Kiyomizu means pure water, and the temple is so named because of the beautiful Otowa Waterfall, which is located at the base of the main hall. The water from the waterfall is funneled into three separate channels that visitors can drink from using cups attached to long poles. Each stream of water is said to have a different property, and visitors choose which stream to drink from based on whether they are searching for longevity, success in school, or luck in love.

The temple is most famous for the huge wooden veranda, or stage, that extends from its main hall and hovers 13 meters above the hillside below. Before the practice was banned in 1872, many pilgrims would leap from the stage in hopes that surviving the plunge would result in the granting of a wish. This tradition led to the Japanese expression “jump off the stage at Kiyomizu,” which is similar to “take the plunge” in English. Another can’t-miss spot at Kiyomizu Temple is the Jishu-Jinja Shrine, which is dedicated to love and matchmaking. It is said that if you can walk between the two large stones at the shrine’s entrance with your eyes closed, you will have good luck finding love.

Kiyomizu Temple is about a 20-minute walk from Kiyomizu Gojo Train Station or a 10-minute walk from the Kiyomizu-michi bus stop. Most of the time, the temple is open every day from 6am to 6pm, but it stays open until 6:30pm in August and September and on weekends and holidays from mid-April through July. Admission is 400 yen. Those who visit in mid-March or late November will be treated to nightly light displays. 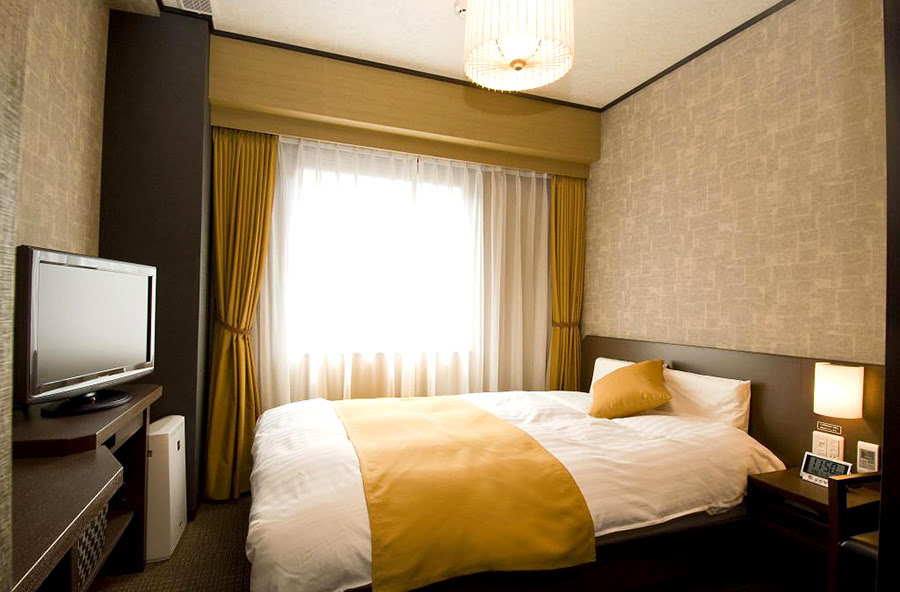 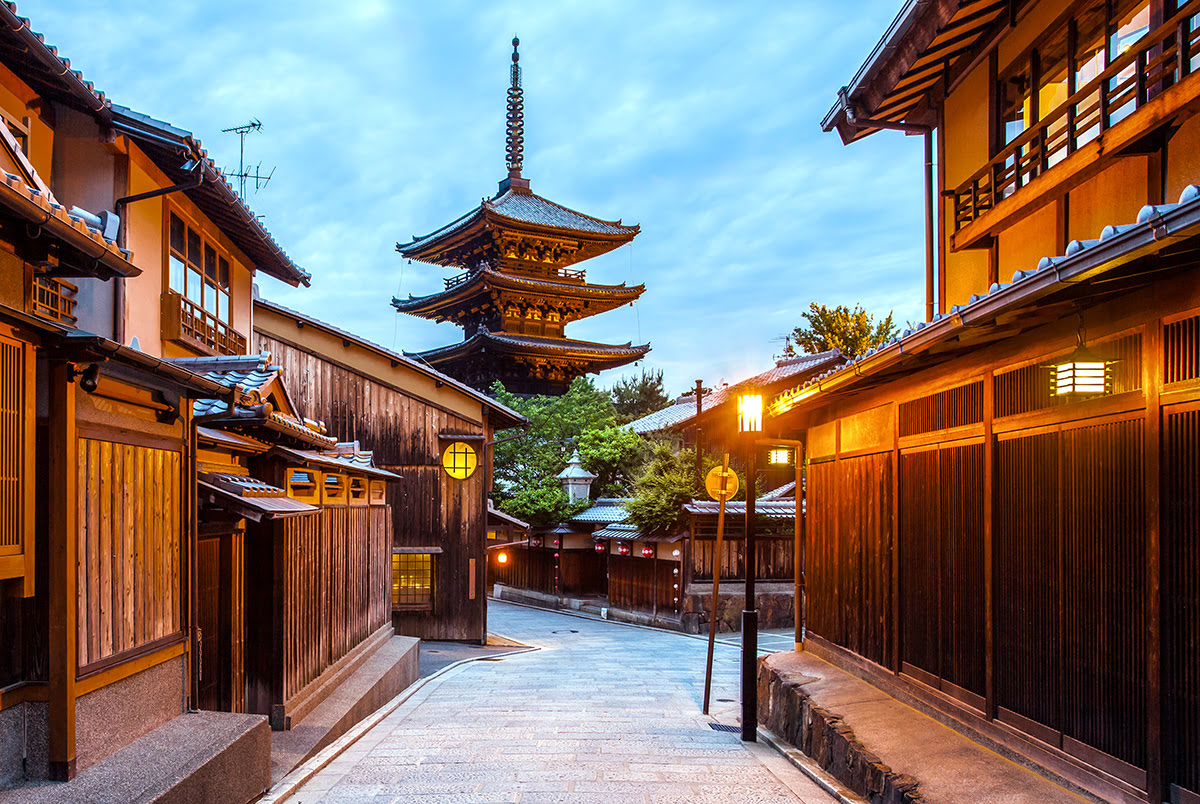 Rent a kimono and explore the Gion District

In a city full of striking photo ops, the Gion District may win the prize for the most photographable region of Kyoto. The Gion District looks like what many people picture when they think of Japan. Ornate temples and shrines are nestled among the historic wooden homes that line the district’s narrow cobblestone streets. Yasaka Pagoda (Yasaka-no-Tou) at Hōkan-ji Temple rises above the other buildings, providing the area with a photogenic focal point. At night, paper lanterns light the streets, and lucky visitors may be able to catch a glimpse of a geisha on her way to act as hostess at a traditional tea service.

One of the most popular activities in the Gion District is renting traditional Japanese clothing to wear during a day spent exploring the area. Once outfitted in a kimono, visitors will want to make sure to snap a photo on the Gion Tatsumi Bridge, which is often referred to as the most picturesque spot in a region full of them. The bridge became a popular site for tourist photos after it was featured prominently in the film Memoirs of a Geisha.

Where to find Geisha in Gion

Enjoying a meal or tea service hosted by a geisha is likely out of reach for most visitors to Japan, but those willing to pay can likely find a hotel concierge who can make the proper arrangements. However, most tourists will find that the cultural show held at Gion Corner offers a great glimpse into the traditional Japanese arts practiced by the modern geisha. The shows are held twice a day at 7pm and 9pm, and cost 3,150 yen (check online for coupons offering a 350 yen discount).

The Gion District is easily accessed by bus from Kyoto Station.

Check In to Kyoto Nanzenji Ryokan Yachiyo, Step Out to Gion District 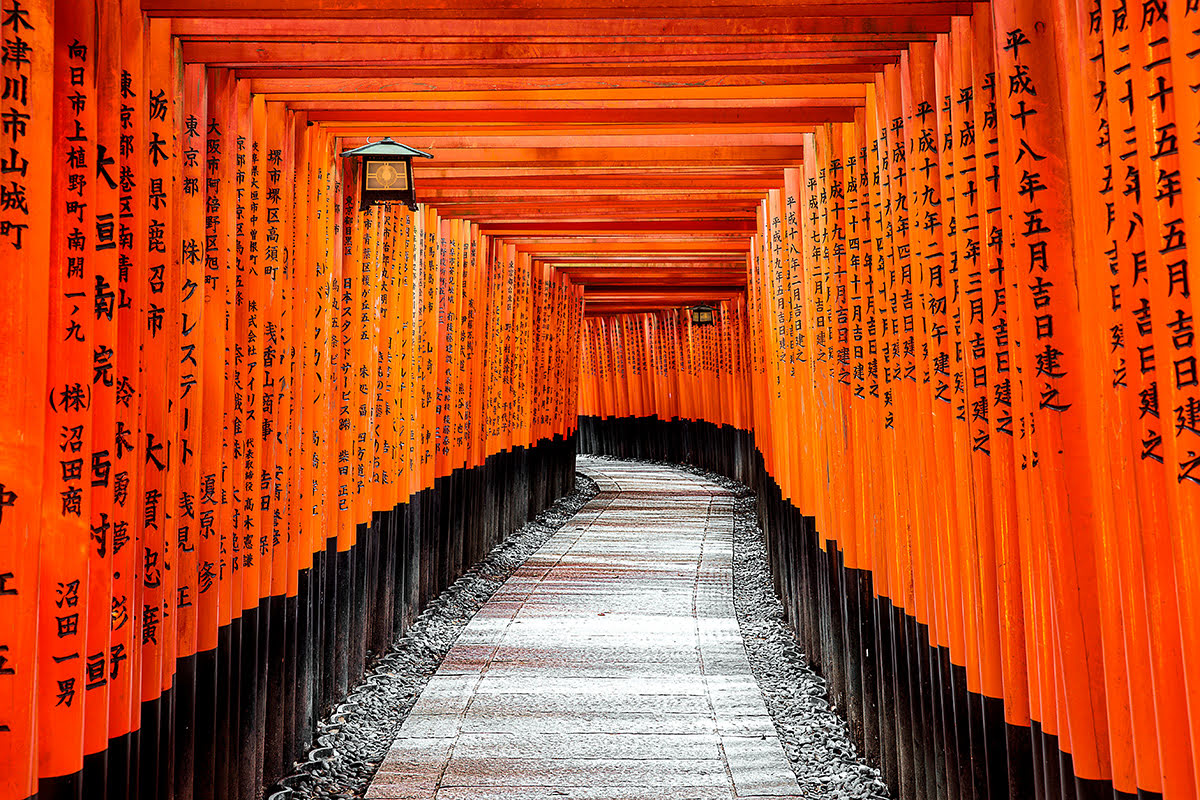 Fushimi Inari Shrine is one of Kyoto’s most popular tourist destinations, particularly for photographers who want to capture an iconic image of the thousands of bright red gates, or Senbon Torii, that straddle the paths around the shrine. Established in 794, Fushimi Inari Shrine is the most important of the thousands of Japanese shrines dedicated to the Shinto god of rice, Inari. The fox is believed to be Inari’s messenger, so visitors will want to keep an eye out for the many fox statues scattered around the grounds.

The shrine stands at the base of Mount Inari, and the a four-kilometer trail up the mountain offers a pleasant afternoon hike. Before beginning the trek up the mountain, visitors should stop to make a wish on a Omokaru Stone, two of which sit atop ornamental stone lanterns located near the entrance to the shrine. Wishmakers stand in front of the lantern and make a silent wish before attempting to lift the decorative stone or giboshi. If the giboshi is lighter than the wisher expected it to be, the wish will be granted; if it’s heavier, the wisher should expect to be disappointed.

Fushimi Inari is easily accessed via both the Keihai line and the JR Nara line as well as the Kyoto city bus. The shrine is always open, and there is no admission charge. 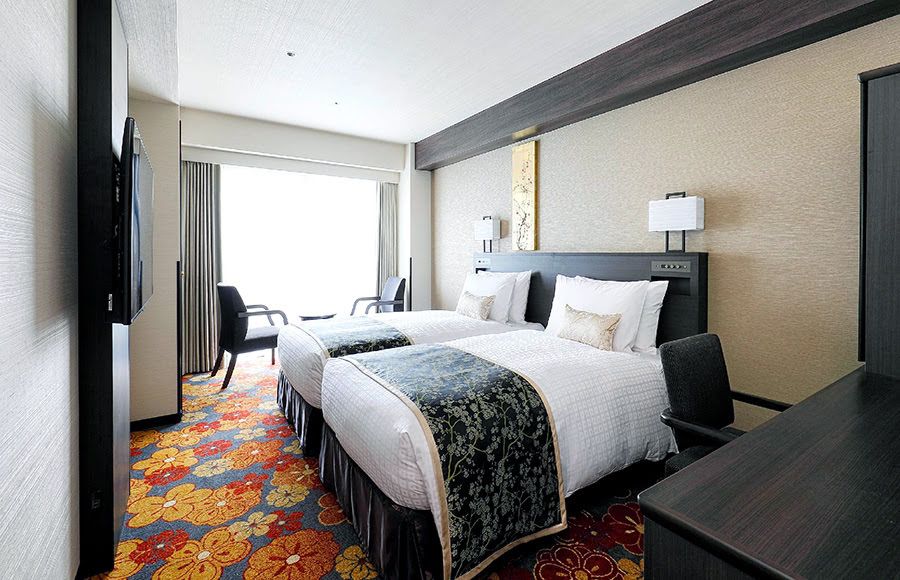 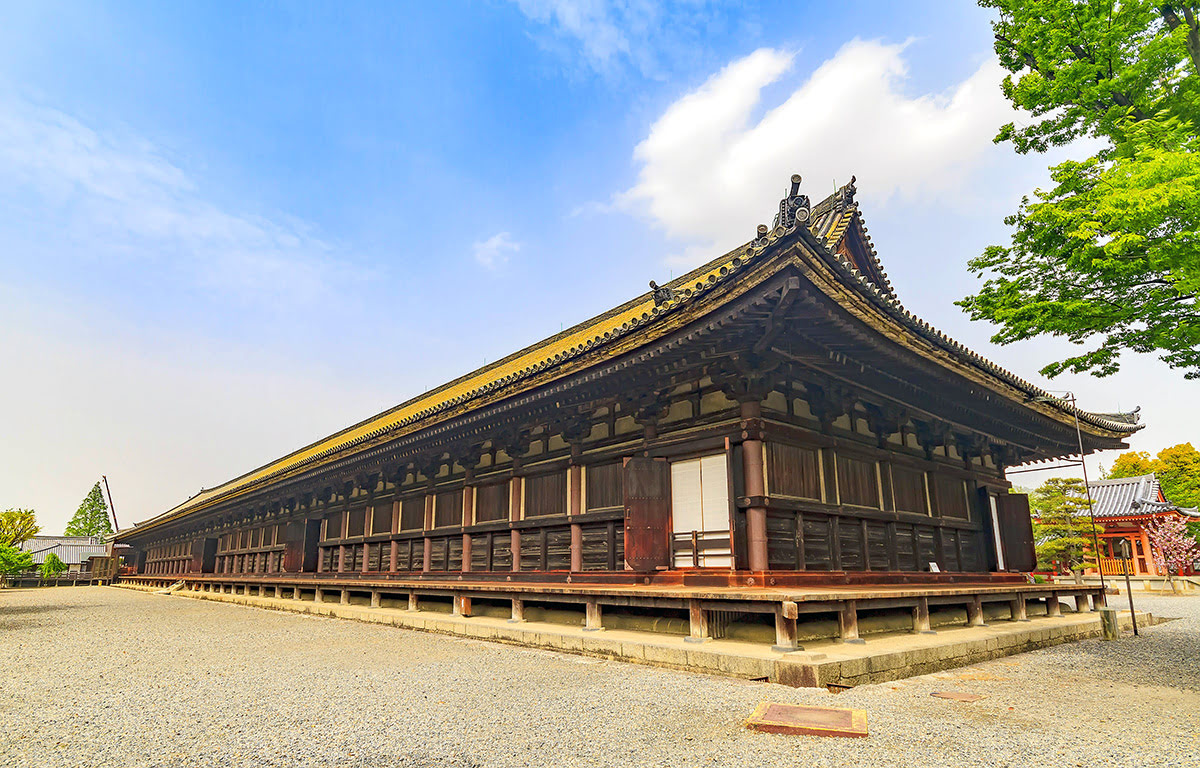 Marvel at the statues of Sanjusangen-do Temple (Rengeoin Sanjusangendo)

Founded in 1164, Sanjyusangen-do Temple is the common name for Rengeō-in, or the hall of the Lotus King. The temple’s most famous attribute, and the one that draws visitors from around the world, is its massive main hall and the vast collection of statues it holds. At 120-meters long, the hall is Japan’s largest wooden building. The immense size of the building makes it possible for the building to hold 1,001 statues of Kannon, the Hindu goddess of Mercy, each of which is over one and a half meters tall.

Visitors who find themselves in Kyoto in mid-January should plan a visit to Sanjyusangen-do Temple during the annual archery competition. The contest dates back to the 12th century and features a row of young women in beautiful kimonos marking their passage into adulthood by competing to hit a target from 60 meters away. Admission to the temple is waived on the day of the competition.

Sanjyusangen-do Temple is located right next to Hakubutsukan-Sanjusangendo-mae bus stop and is about a 20-minute walk from Kyoto Station. The temple is open every day from 8am to 5pm from April 1 to November 15. From November 16 through March 31, the hours are 9am to 4pm. The cost of admission is 600 yen for adults, 400 yen for students, and 300 yen for young children. 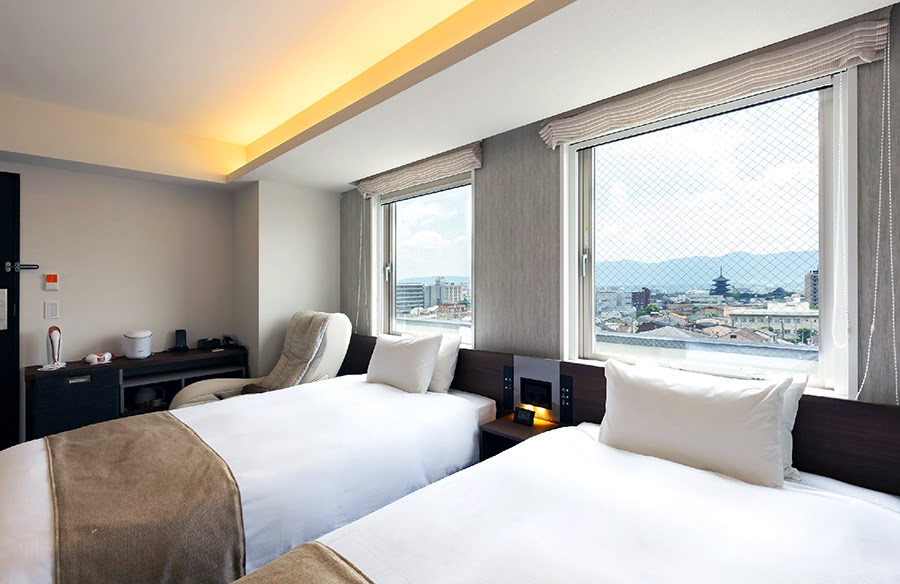 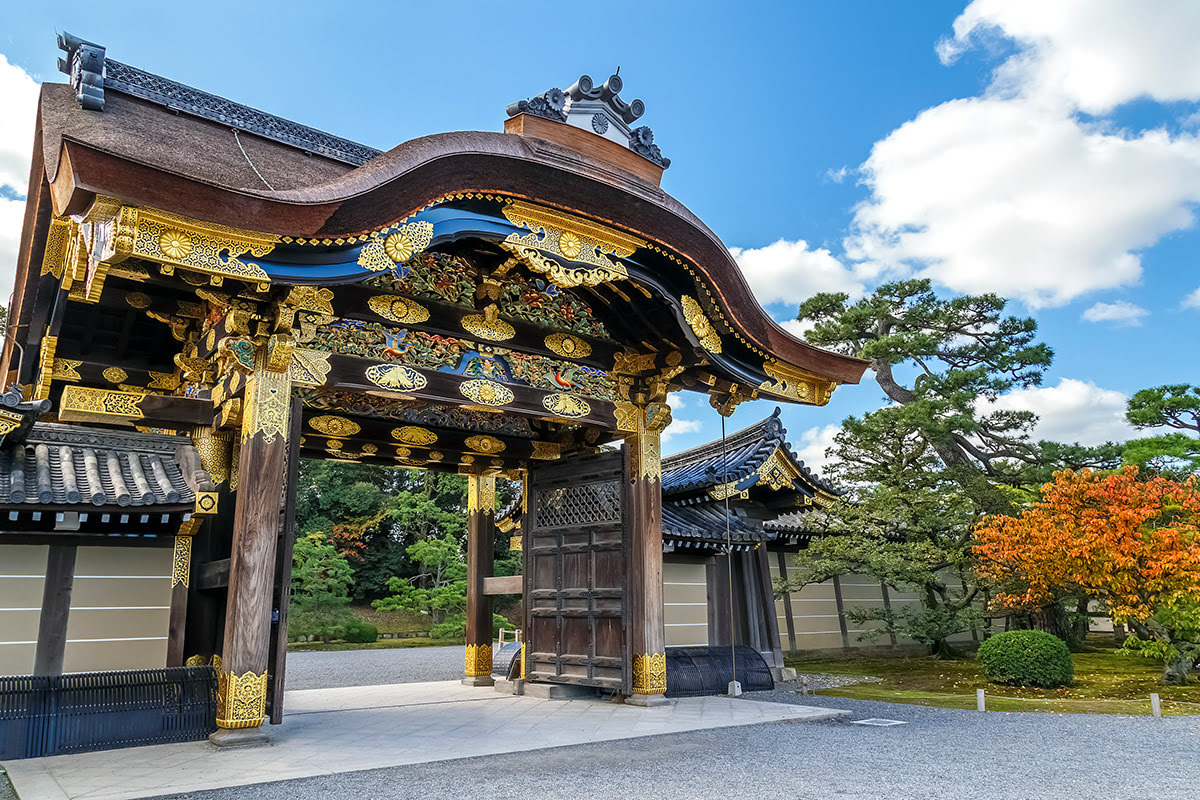 Nijo Castle is another of Kyoto’s UNESCO sites and an incredible example of the royal architecture of the Edo period. The sprawling site consists of two concentric circles of fortifications, each with its own moat, two palaces with support buildings, and several gardens. The castle was built as a home for the first shogun of the Edo period, Tokugawa Ieyasu, and its vast size and intense fortifications help demonstrate the power that the shoguns held during the period. When the emperor regained power in the late 1800s, Nijo Castle became an imperial palace.

One of the site’s better-preserved areas is Ninomaru Palace, which consists of five connected buildings, the interiors of which are decorated with elaborate carvings and extensive gold leaf detailing. The palace’s most unique features are the “nightingale floors,” which served as a kind of early alarm system since they were designed to make a chirping noise when stepped upon. After checking out the nightingale floors, visitors should visit the traditional Japanese gardens and pond that adjoin Ninomaru Palace.

Nijo Castle is just a five-minute walk from Nijojo-mae Station. The castle opens at 8:45am, and the last entry is at 4pm. It is closed on Tuesdays in January, July, August, and December as well as from December 26 through January 4. Admission is 600 yen for adults, 350 yen for junior high and high school students, and 200 yen for elementary students.

Check In to Sotetsu Fresa Inn Kyoto-Hachijoguchi, Step Out to Nijo Castle 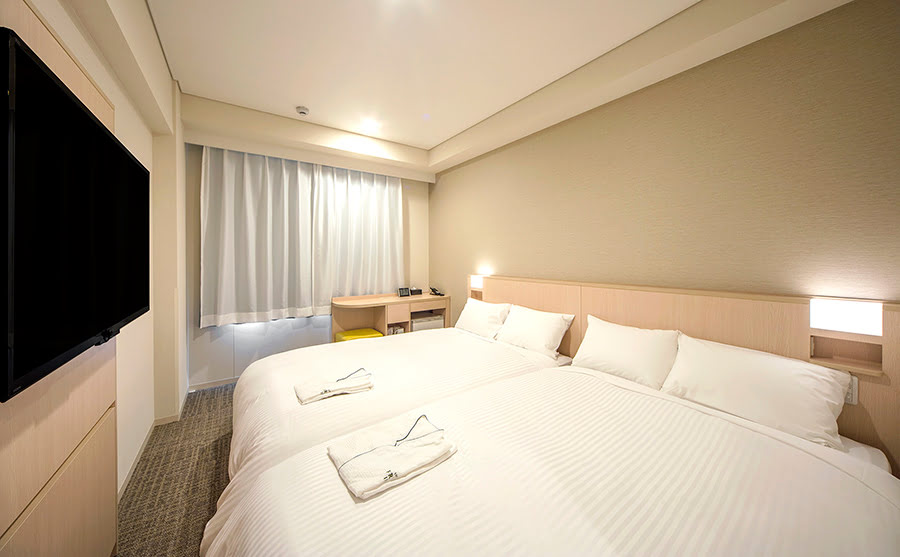 One of Japan’s four top-level museums, Kyoto National Museum is prized for its incredible special exhibitions. The museum opened in 1897 and was originally designed to hold the art and treasures that were privately owned by temples and shrines. Today, the permanent collection focuses on pre-modern Asian art and includes the largest collection of artifacts from the Heian period. The museum is divided into three sections – fine arts, handicrafts, and archaeology, and there are about 6,000 pieces total on display.

The museum’s newest wing, the Heisei Chishinkan, opened in 2014. The new modern wing provided more space for the permanent collection and offers a striking contrast to the museum’s older buildings. Temporary special exhibitions are housed in the original main building, which was constructed in the Meiji period. Past special exhibitions have included Swords of Kyoto and Elegant Arts of the Classical Japanese Court. Visitors who want to see a special exhibition should be sure to plan ahead as they are incredibly popular, and tickets may not be available the same day.

The museum is located right across the street from Sanjyusangen-do Temple and is easily accessed from the Hakubutsukan-Sanjusangendo-mae bus stop. Alternatively, it is roughly a 20-minute walk from Kyoto Station. Beginning June 23, 2020, the admission fee will be 750 yen for adults and 350 yen for university students. Children under 17 and adults over 70 are free. Special exhibitions require an additional 1,500-yen ticket. Kyoto National Museum opens at 9:00am every day and closes at 5:00pm, except on Fridays and Saturdays when it remains open until 8:00pm. It is closed on Mondays and during the New Year holidays.

Check In to Daiwa Roynet Hotel Kyoto-ekimae, Step Out to Kyoto National Museum 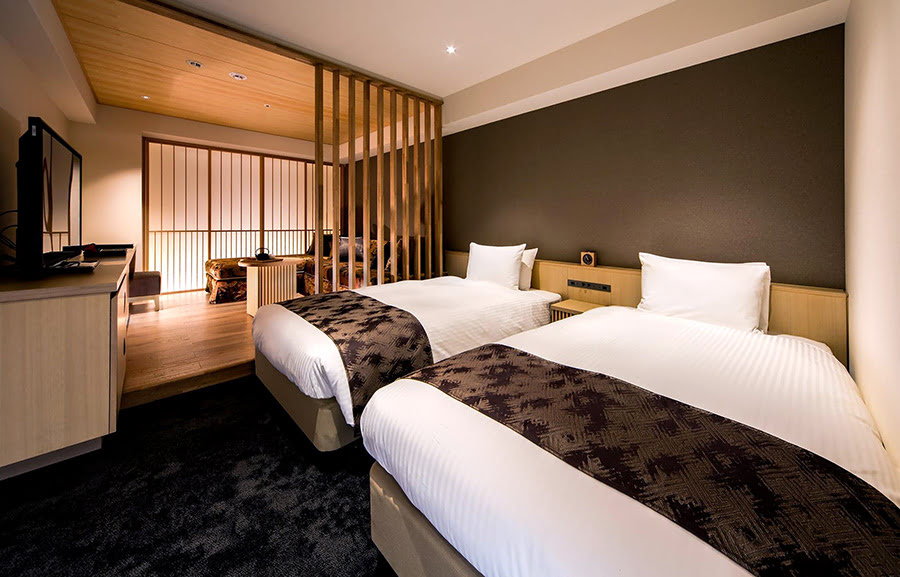 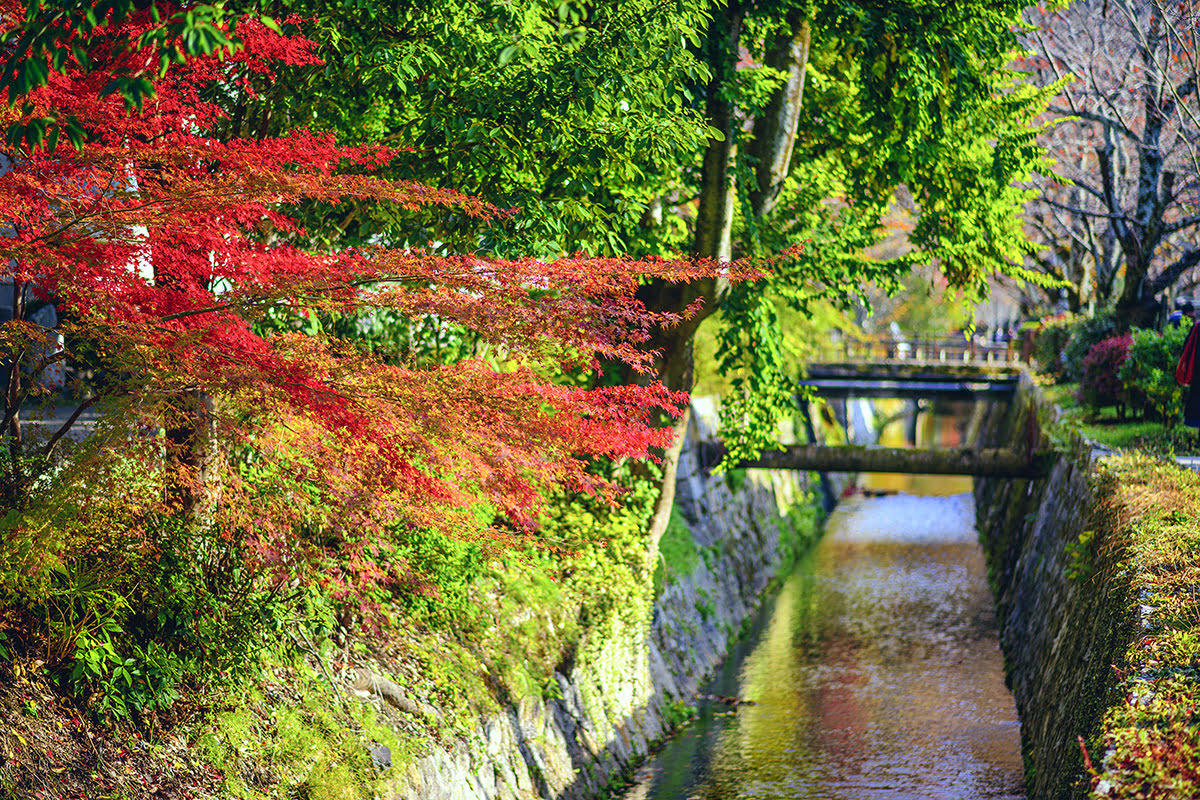 Take a stroll along the Philosopher’s Path

Located in the famed Higashiyama district, Philosopher’s Path is a quiet pedestrian walkway that runs along a cherry tree-lined canal. The stone path connects two of the city’s religious sites, Nanzen-ji Temple and Ginkaku-ji Temple, making it an excellent route for a contemplative walk. In fact, the path takes its name from the fact that Japan’s most well-known philosopher, Nishida Kitaro, is said to have practiced walking meditation as he strolled along the path on his way to Kyoto University.

The two-kilometer path begins near another of the city’s UNESCO World Heritage sites, Ginakku-ji Temple, otherwise known as the Silver Pavillion. While it is possible to walk the entirety of the path quite quickly, it is worth taking the time to stop to enjoy the smaller temples and shrines along the way. There are also a number of boutiques and cafes along the path, making it possible to extend the outing even more. The canal that runs alongside Philosopher’s Path is an attraction in itself. Built during the Meiji period, the canal once powered Japan’s first hydroelectric plant. There is also a beautiful aqueduct at the Nanzen-ji Temple end of the path.

Visitors can begin their walk on the Philosopher’s Path at Nanzen-ji Temple or Ginkaku-ji Temple. A leisurely stroll between the two temples will take about 30 minutes. There is no cost to walk along the pathway. 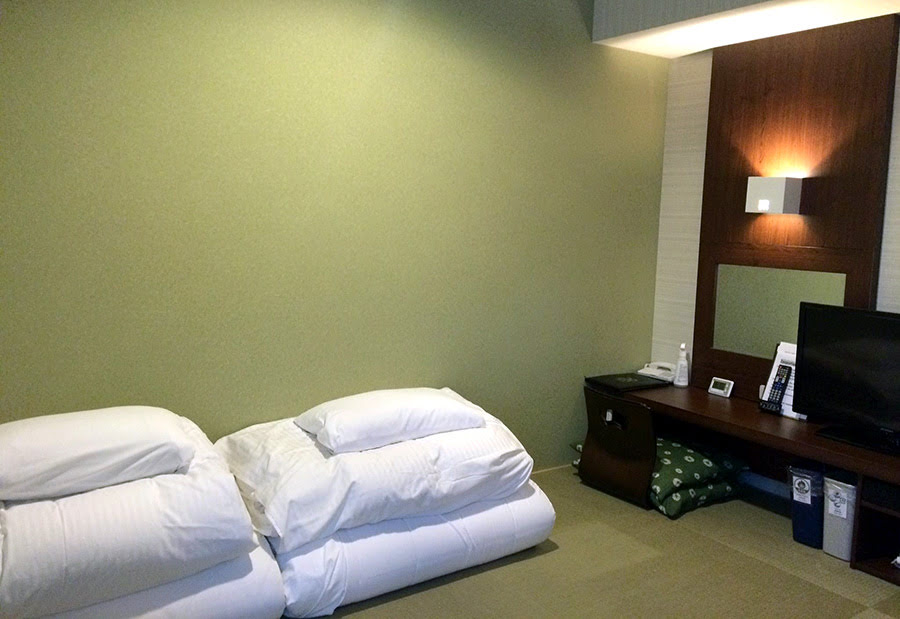