For visitors to Bangkok, sightseeing is sure to be a top priority, and there are certainly plenty of exciting cultural attractions in this vibrant and diverse city. From massive skyscrapers to historic temples, there is so much to do that it can be hard to decide what to see in Bangkok. The modern and the ancient exist side-by-side in Bangkok, and tourists will want to make sure that their itineraries include time to explore both aspects of the city. No trip to Bangkok would be complete without a visit to at least one of the city’s centuries-old places of worship and a trip to the top of Thailand’s tallest building. Use this guide to the best attractions in Bangkok to plan the trip of a lifetime. 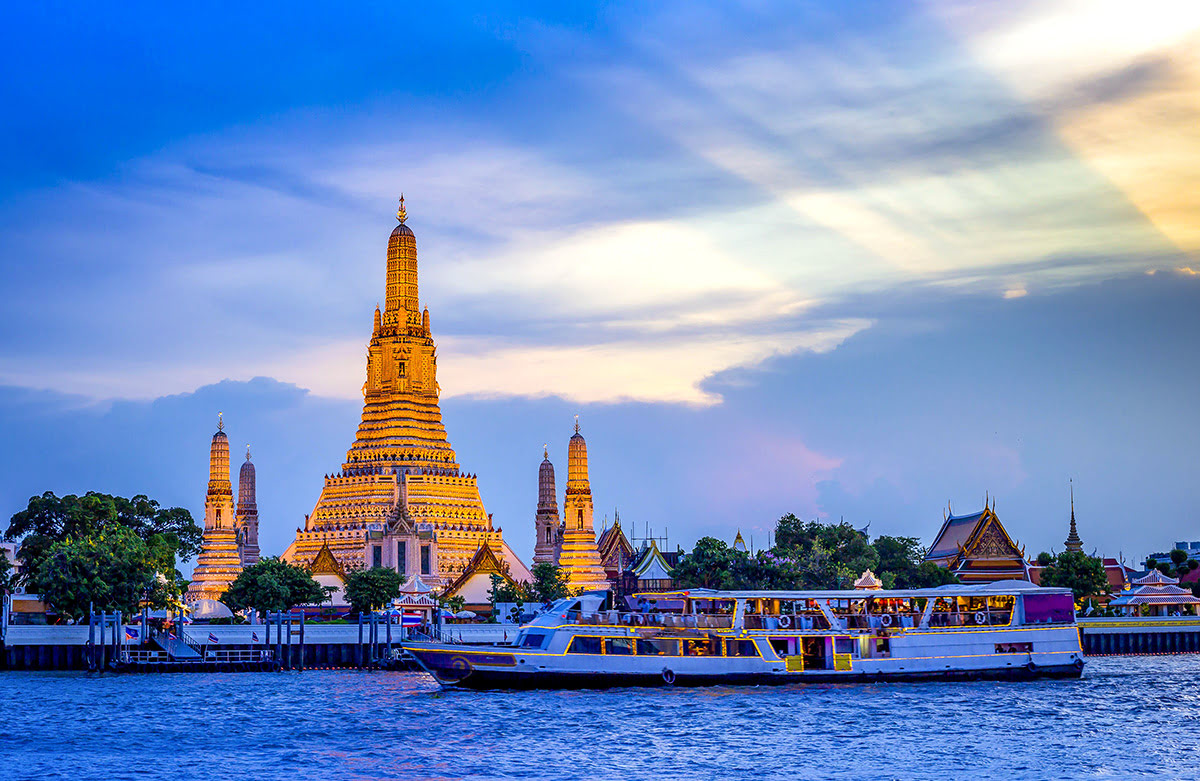 All visitors to Bangkok will want to plan a visit to Wat Arun, a Hindu temple dedicated to the god Aruna, which is one of Thailand’s most famous landmarks. Located on the west bank of the Chao Phraya River, Wat Arun is easily recognized thanks to its most striking feature, a porcelain-covered, 82-meter tower or prang that is topped with a seven-pronged trident.

Check In to Chatrium Hotel Riverside Bangkok, Step Out to Wat Arun 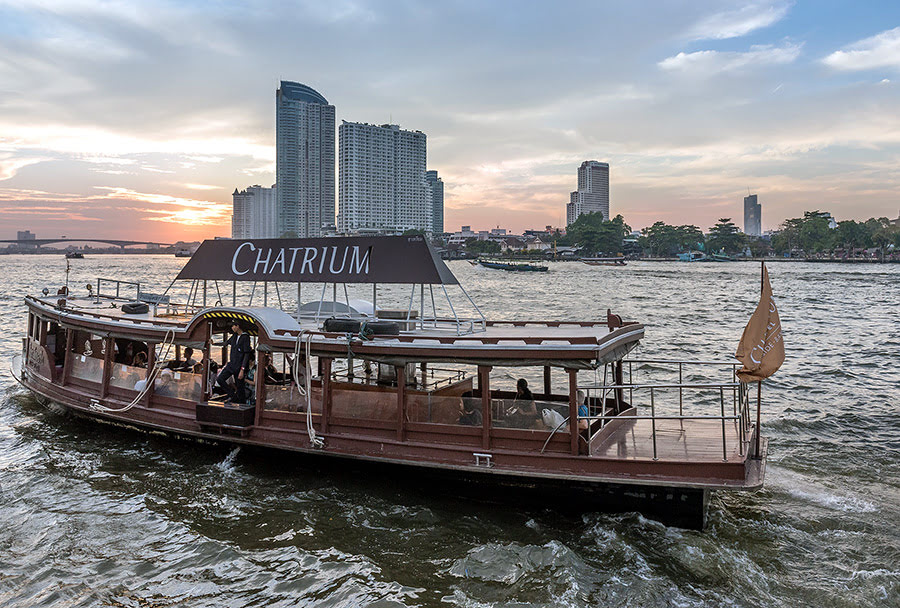 Located in the heart of Old Town Bangkok, Wat Saket, or the Golden Mount, is one of Bangkok’s oldest temples. The Buddhist temple sits atop a hill, and reaching the main temple grounds requires walking up more than 300 steps. There are plenty of spots on the tree-covered stairs to stop and catch a breath, and the reward at the top is an incredible, 360-degree view of the city. From the top of the stairs, visitors will be able to see Wat Phra Kaew at the Grand Palace to the west and the skyscrapers of the business district to the east.

The golden stupa that forms the focal point of the temple complex is open to visitors year-round from 8am to 5pm, and admission is 50 baht. Those who are fortunate enough to visit Bangkok during the full moon in November will get to experience the excitement of the yearly Loy Krathong festival. During this week of celebration, the golden stupa is wrapped in a red cloth and colorful lanterns adorn the temple grounds as pilgrims visit Wat Saket to pay homage to the relics of Buddha that are housed in the stupa.

Check In to Prince Palace Hotel, Step Out to Wat Saket 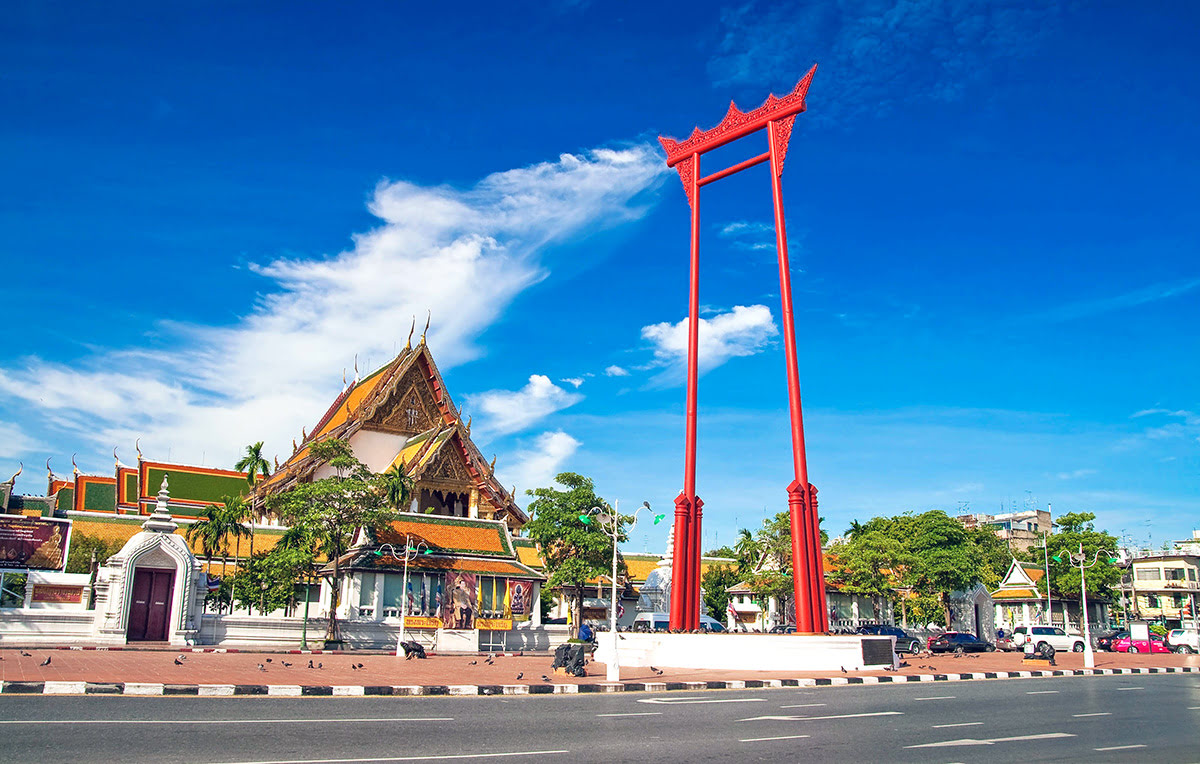 Bangkok’s Giant Swing is reminder of a unique religious ceremony that was once practiced annually by local Hindus. The 27-meter structure that towers over nearby Wat Suthat was built in 1784 and was central to the yearly swing ceremony that took place after the rice harvest each December. During the ceremony, teams of men in elaborate costumes would stand on a huge swing that hung from the upper bar of the massive wooden structure. They would use the swing to propel themselves into the air with the goal of grabbing a bag of gold coins, which was suspended from a pole some 25 meters above the ground. The ceremony wasn’t just about the gold though. The swinging was a symbolic recreation of the Hindu origin story in which Shiva had to stand on a mountaintop as snakes attempted to shake him off.

The ceremony continued for nearly 150 years but was discontinued in 1935 after a series of deaths. Today the swing remains one of Bangkok’s most popular tourist attractions.

Check In to Bangkok Centre Hotel, Step Out to the Giant Swing 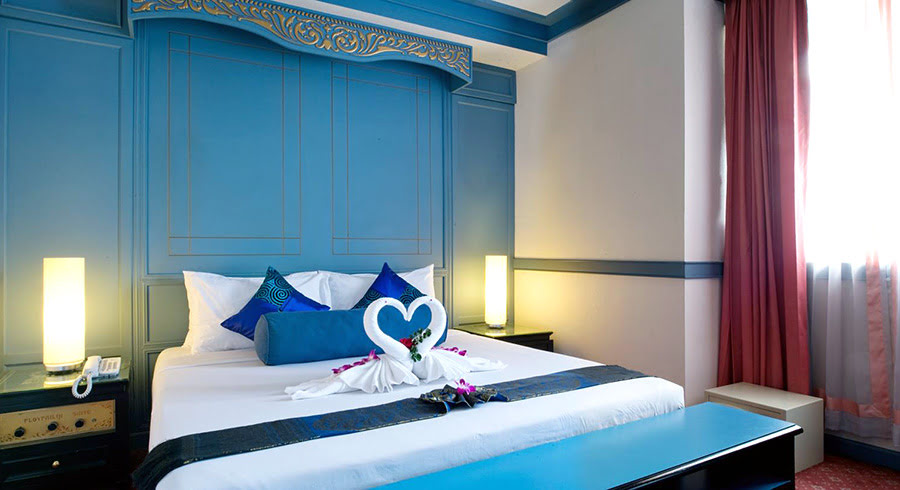 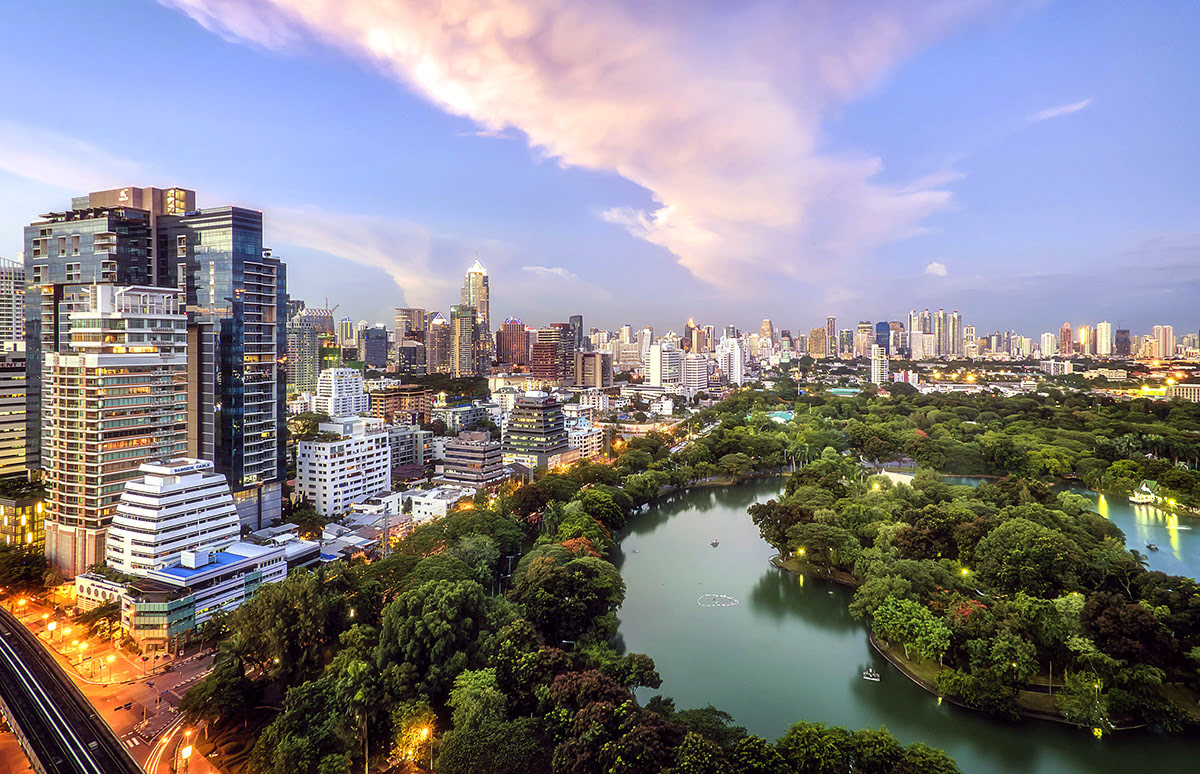 Located in the heart of Bangkok’s commercial district, Lumphini Park offers visitors and locals a welcome respite from the hustle and bustle of the city. The 142-acre park was named after the Nepalese city of Lumbini, which is birthplace of the Buddha. Carved out of royal property by King Rama VI, Lumphini Park was originally the grounds of a museum, but it was reimagined as the city’s first park after World War I. A statue of King Rama Vi welcomes visitors at the park’s southwest entrance.

Lumphini Park is a rare expanse of open public space in a densely populated city. The artificial lake in the center of the park is an area highlight, and renting a paddleboat to cruise around the lake is a lovely way to spend an afternoon. Lumphini Park is particularly busy in the mornings and early evenings when runners flock to the 2.5-kilometer trail that is also popular with cyclists and parents pushing strollers. The park is also home to a public library, a dance hall, and multiple playground structures.

Check In to Grande Centre Point Hotel Ploenchit, Step Out to Lumphini Park 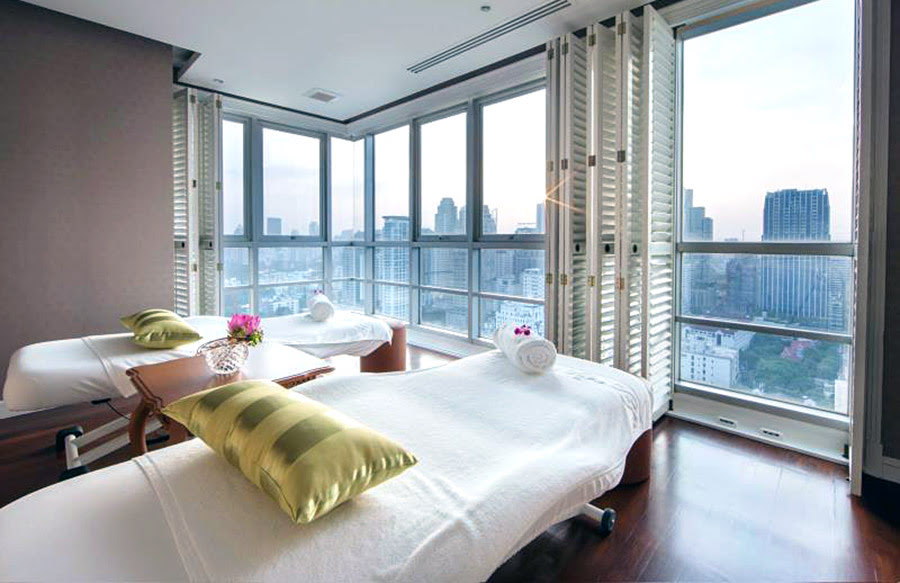 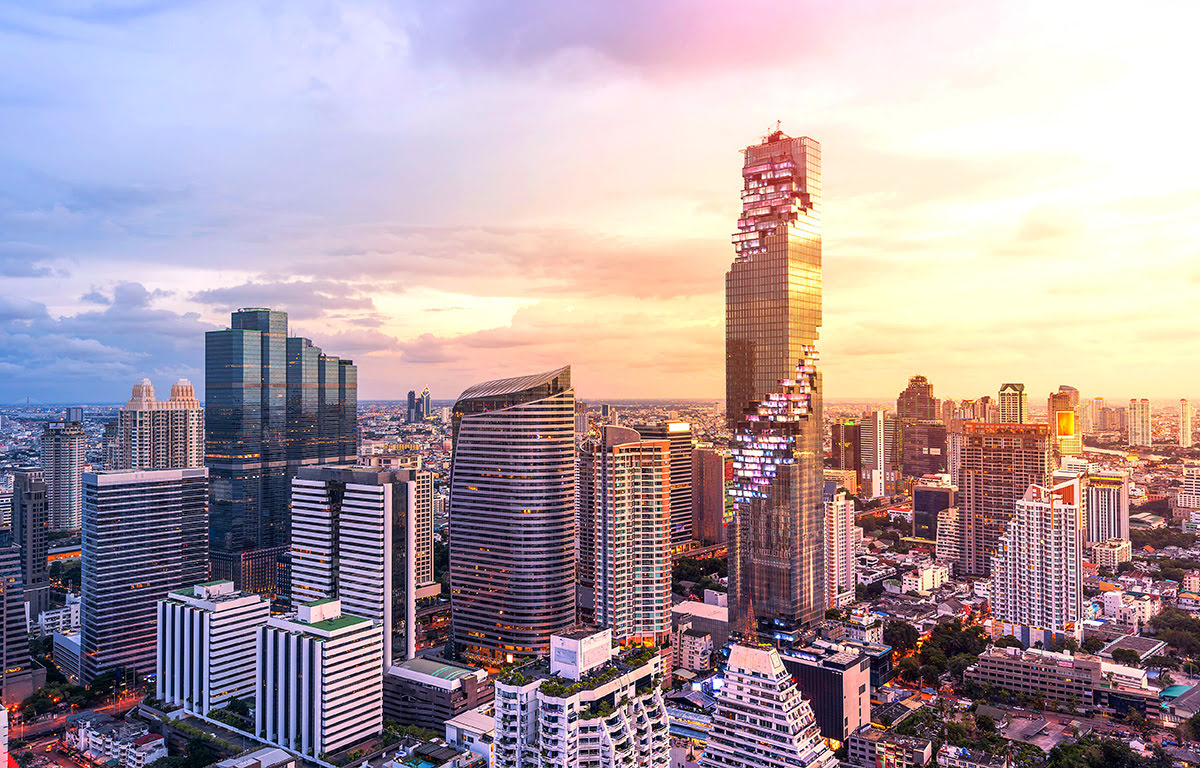 Thailand’s tallest building, King Power Mahanakhon is 314-meters and 78 stories tall. MahaNakhon means “Great Metropolis” in Thai, and the towering structure feels a bit like a self-contained city. The mixed-use skyscraper, which is located in Bangkok’s Silom District, includes residential and retail space as well as restaurants, hotels, and a public square. After its completion in 2016, King Power Mahanakhon quickly rose to the top of many lists of what to see in Bangkok.

The building is worth visiting just to admire the tower’s striking exterior, which features a spiral of cut-out cubes that makes the building’s reflective glass surface look almost pixelated. Once visitors have admired the modern architecture, they will want to head inside and up to one of the observation decks. The most exciting attraction in King Power Mahanakhon is the “Glass Tray Experience” offered on the 78th floor. The glass tray is a section of transparent floor that extends off the side of the tower, giving guests who walk on it the feeling of being suspended 300 meters above the ground. Those who need a bit of liquid courage can opt for a drink at the rooftop bar before posing for a photo on the glass tray. Visitors who prefer to take in the view from a safer distance can head to the indoor observation area on the 74th floor.

Check In to Pullman Bangkok King Power Hotel, Step Out to Silom

Assumption Cathedral is Bangkok’s most notable Catholic church. Built at the request of a French missionary in the early 1800s, Assumption Cathedral underwent a massive reconstruction in the early 20th century, which resulted in the Romanesque-style building that can be seen today. The church was again renovated and all of the stained glass windows replaced following damage sustained during World War II.

Visitors to the cathedral come to admire the soaring golden interior and to see the statue of Pope John Paul II, which commemorates the visit he paid in 1984. Assumption Cathedral is open to the public seven days a week, and Sunday masses are held at 6am, 7:30am, 8:30am, 10am, and 5pm.

Check In to Tower Club at Lebua Hotel, Step Out to Assumption Cathedral 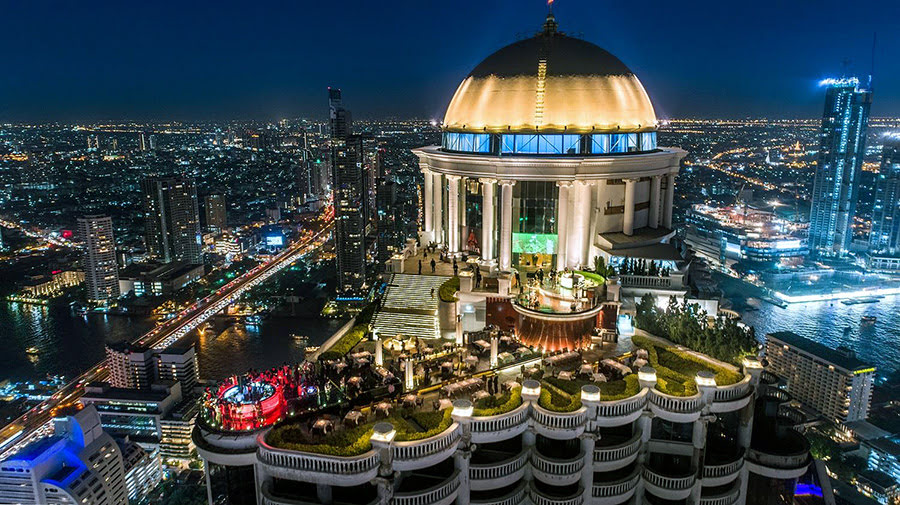 Located on the Thornburi side of the Chao Phraya River, Bangkok’s historic Kudeejeen neighborhood is a great place to spend an afternoon exploring and getting a feel for the city’s rich, multicultural history. First inhabited in 1767, the Kudeejeen neighborhood was historically home to Portuguese settlers and Thai people of Chinese descent. From its inception, Kudeejeen was a melting pot where Catholics, Muslims, and Buddhists lived and worshipped side-by-side. Visitors to the neighborhood today will still find a church, a mosque, and several temples and shrines in close proximity.

Historic Kudeejeen has a village-like feel that is accentuated by the fact that the neighborhood is connected by narrow alleyways that are big enough for a motorbike but not a car, making it a particularly pleasant place to walk. The neighborhood’s location along the Chao Phaya River adds to its picturesque charm. Visitors will want to find one of the four bakeries in the area that sell the famous Kudeejeen cupcake, which is made according to a 200-year-old Portugese recipe.

Check In to The Aiyapura Bangkok, Step Out to Thonburi 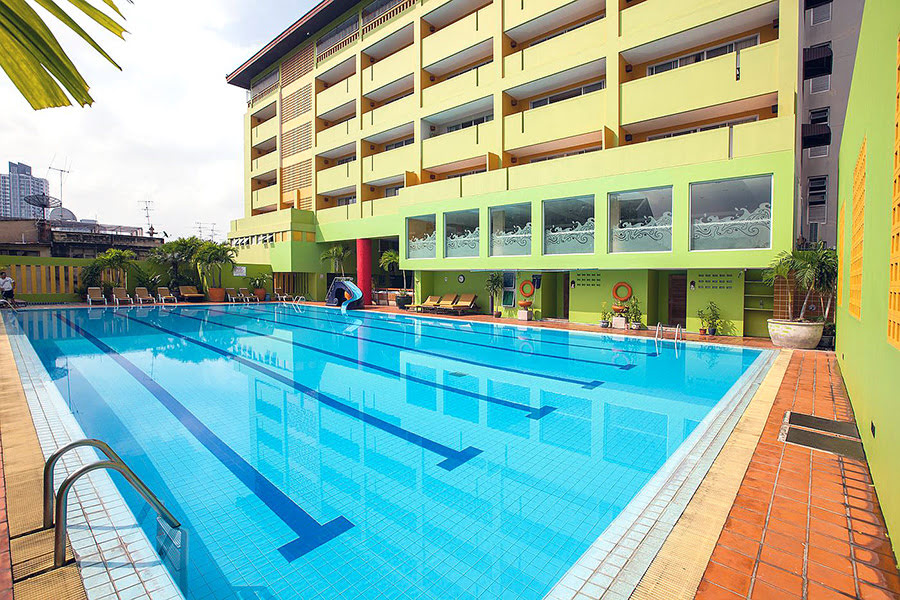 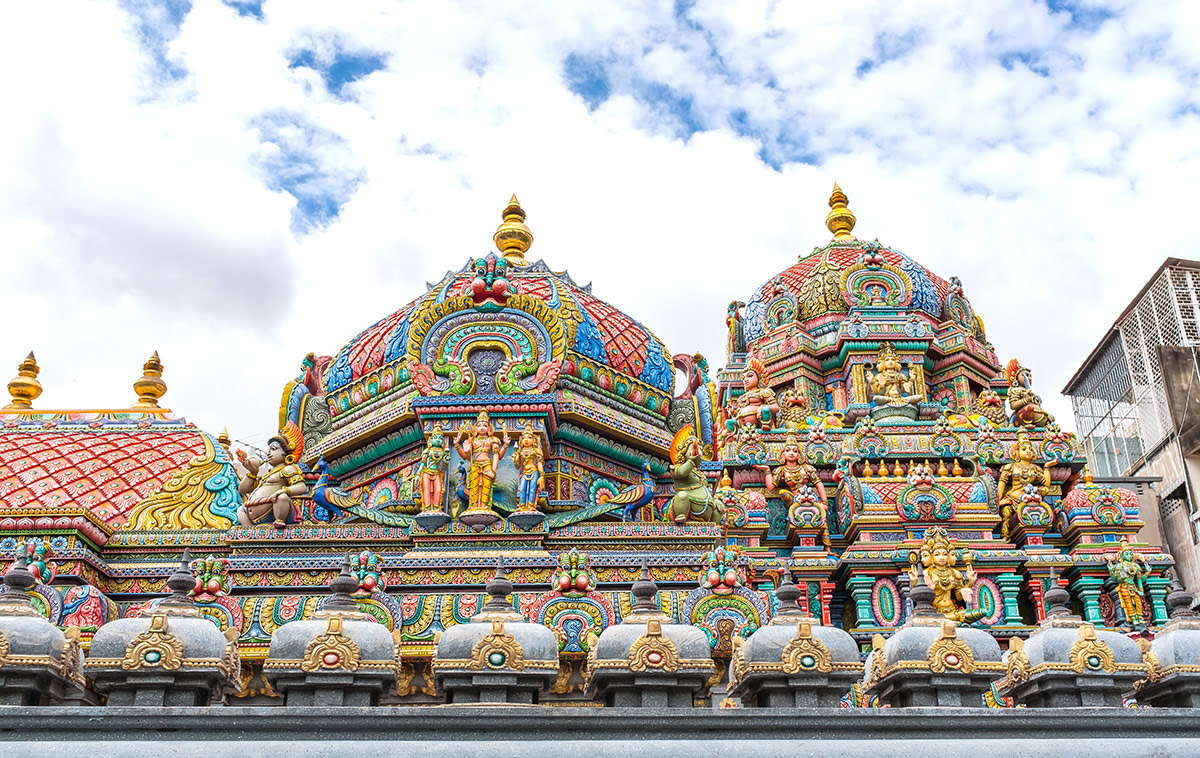 Another of Bangkok’s many religious attraction is Sri Mariamman Temple, which is Thailand’s main Tamil Hindu temple. The colorfully ornate temple was designed by Tamil immigrants who came to Bangkok as gemstone traders. The distinctive southeast Indian architecture clearly differentiates this temple from the more common Buddhist temples that dot the city.

The streets surrounding the temple are full of vendors selling marigold garlands and fruits, which can be left as offerings to the temple’s main deity, Maha Mariamman. While visitors are welcome to photograph the temple’s beautiful exterior carvings, photographs are not permitted inside the temple. Sri Mariamman Temple is free to enter and is open daily from 6am to 8pm.

Check In to Bangkok Marriott Hotel The Surawongse, Step Out to Sri Mariamman Temple 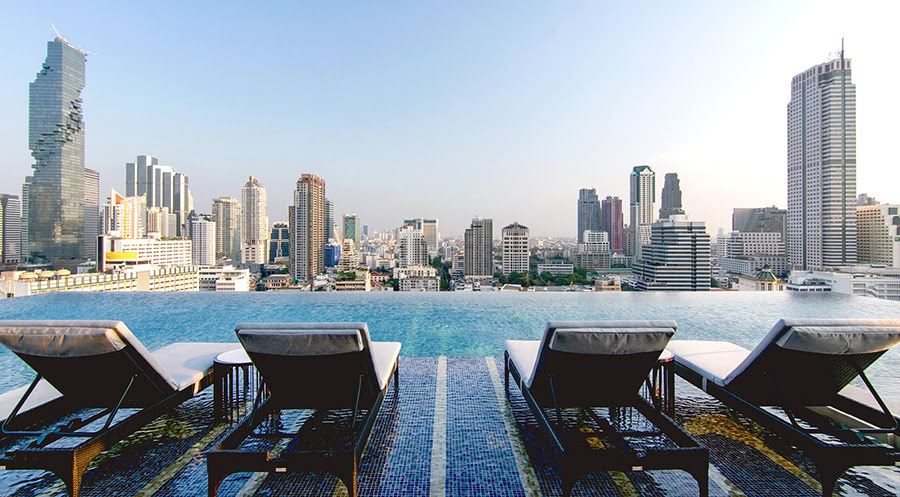 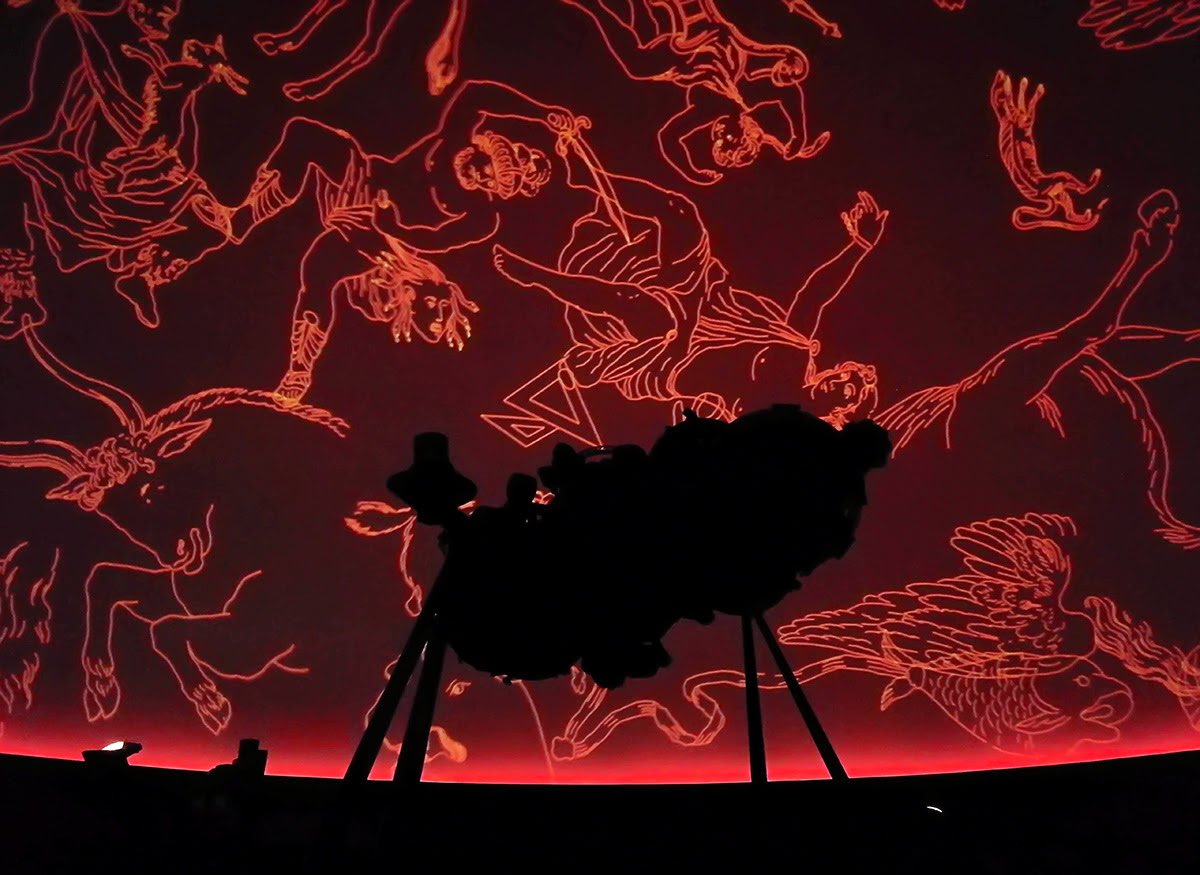 After a few days of touring Bangkok’s many historic, cultural attractions, visitors may be ready for an afternoon indoors, surrounded by modernity. The Bangkok Museum of Science and Planetarium is full of interactive, multimedia exhibits that will delight visitors of any age.

The museum is located in Sukhumvit, the city’s main commercial center, an area packed with hotels and shopping malls. The Bangkok Museum of Science and Planetarium is open Tuesday through Sunday from 8:30am to 4:30pm. Admission is 30 baht for adults and 20 baht for children and students. The planetarium, Thailand’s oldest, is the museum’s most popular permanent attraction. Tickets to the planetarium show are an additional 30 baht per child/student and 50 baht per adult. Enligsh language shows are held every Tuesday at 10am.

Check In to Dream Hotel Bangkok, Step Out to Sukhumvit 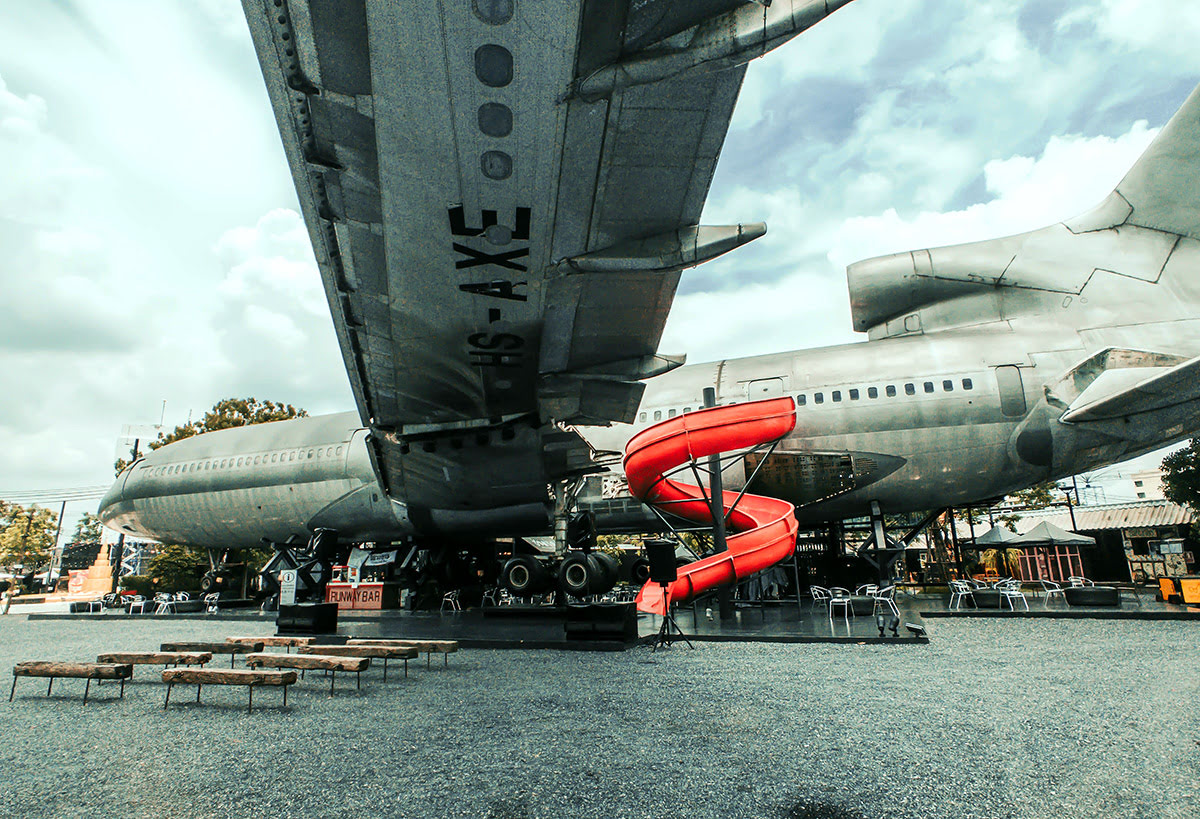 Bangkok’s night markets are legendary and sure to top any tourist’s list of can’t-miss attractions. Visitors looking for a truly unique night market experience should head for Chang Chui, or the “plane market” as it is known in English. Chang Chui’s English nickname comes from the decommissioned airplane in the center of the market. The retired jet is only open for special events, but it provides a striking backdrop for vacation selfies.

One of the main reasons to visit any night market is to sample an array of local foods, and in this department, Chang Chui does not disappoint. The market boasts over a hundred Thai street food dishes as well as high-end experimental cuisine. The market also features a number of bars, so those who want a cold beer or a cocktail with their meal will not be disappointed. Once visitors have eaten their fill, there is plenty of shopping to be done and entertainment to be enjoyed in one of the two performances spaces. Chang Chui is open every day but Wednesday; however, tourists should plan to visit on a weekend evening when all of the shops, bars, and restaurants will be open.

Check In to Issara House Bangkok, Step Out to Chang Chui 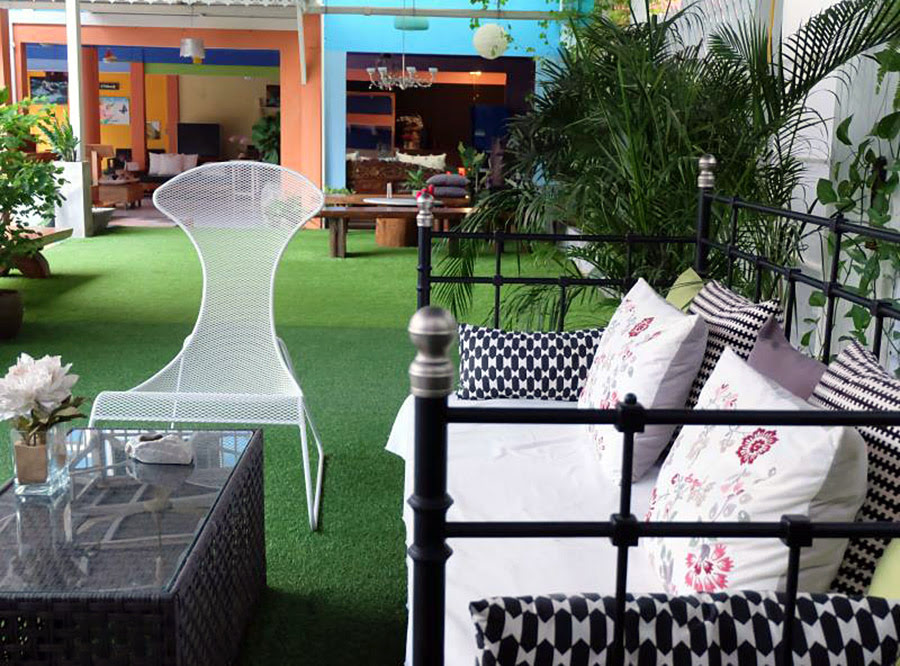